An argument against staking 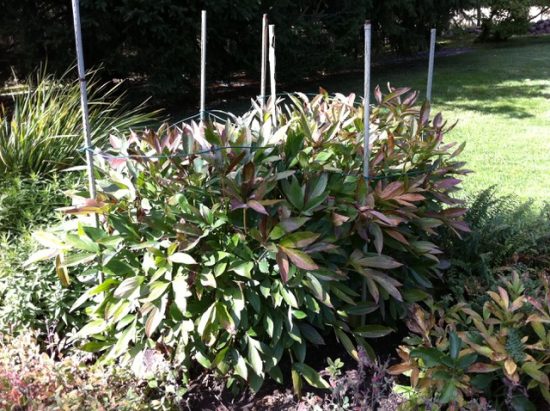 Nobody likes to stake plants, right?  I have always felt that if a plant needed staking it was somehow an indication of my own ineptitude. Maybe if I had grown it properly, it would be strong and self-supporting. But truth is, some plants just need a helping hand and I’m just not willing to give it.

I have grown several different varieties of peony and have never been happy with the traditional ways in which we are meant to stake them. Using peony rings is just an exercise in frustration.  I have used short-legged ones that are useless. I have used tall ones where, after struggling to get the sliding legs equidistant from each other, I simply could not jam them into the ground without having them mangle the plant and then bend. By the time I’m finished, the whole thing looks like a dog’s breakfast. And for what? The hoops simply support the foliage (which don’t need it anyway) and the heavy blooms look great when they’re in bud, with heroic stems holding them aloft. But once they’ve opened, the full weight of their ridiculously ostentatious petals means one rain and they’ve collapsed.  I’d rather see them falling onto the ground than be strung up like criminals. It’s enough to make you give away all your double peonies and trade them in for the singles. That’s why I handed over a couple of hundred dollars to buy a sturdy Itoh hybrid yellow peony that holds its blooms up without any help from me.

Take this attempt at corralling peonies (top)) for example. This is at a local well-known garden where I once worked—in fact, a tourist destination where the gardeners are trained. I can promise you that I’m not responsible for this fiasco, but if a professional can’t make staking look good, then what are the hopes for everyone else?  The only thing worse than this contraption is the fact that this photo was taken in September, a full three months after blooming had finished!  Free the peony!

Wait, there’s more. And sadly, at the same garden (below). 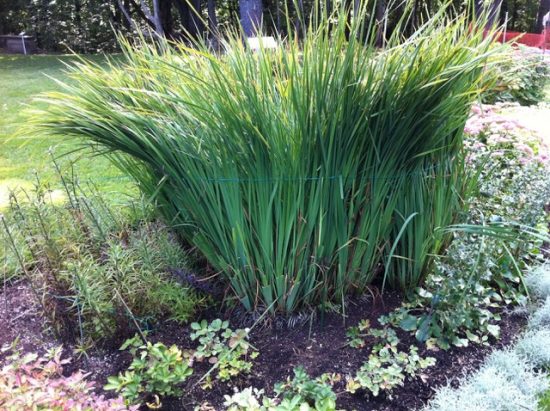 Some plants should never see staking. There are several reasons for this opinion, none of them having to do with my own dislike or laziness. Some plants are meant to move with the breeze, to provide a natural effect in the garden, a counterpoint to more erect and formal plants. Like Siberian iris, for example. Siberian iris isn’t meant to look like a cartoon character with crazy hair. But sadly, this is exactly what’s happened here. The plants that surround it also need to see the sun, but this is not a good enough reason to commit this staking travesty.

When your Siberian iris is this big, you need to reassess your maintenance strategy. It needs dividing, not staking. When I see gardeners doing this, the first thing I want to do is rip the twine off—or confiscate the plant. 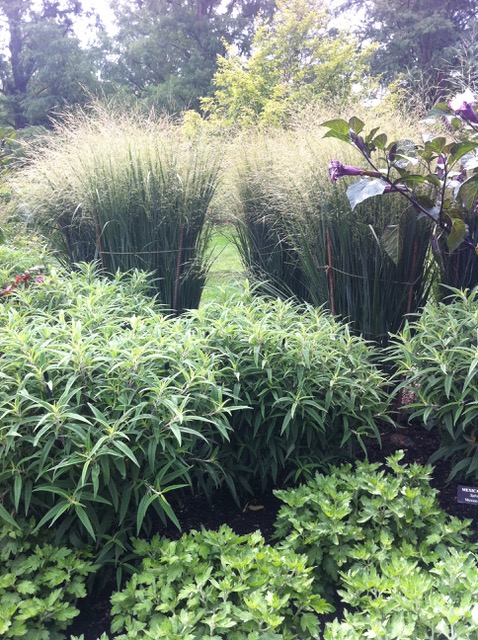 Of course, when you’re a world-renowned public garden and you have flopping problems, what do you do?  On a visit to Longwood Gardens a few years ago, I was surprised to see this impressive staking job (above) on tall ornamental grasses.

The first thing I thought when I saw these Panicum was the headache they would have caused if I was the one to ensure they looked good for the thousands of people who would walk by in a day. I was pretty impressed. But I also think that this staking effort is more prophylactic than anything else; they don’t look to me like they’re in imminent danger of flopping over. Still, I can’t help but think that these grasses were probably replaced the following year with another type that is more self-supporting, like Calamagrostis or Miscanthus.  Any grasses that can flop after the first driving rain storm should be replaced with sturdier contenders.

I can’t leave you without showing another planting from Longwood, one where there is ample flopping, Lord knows. It gives me nightmares to imagine these gracefully lilting seed heads of papyrus staked! 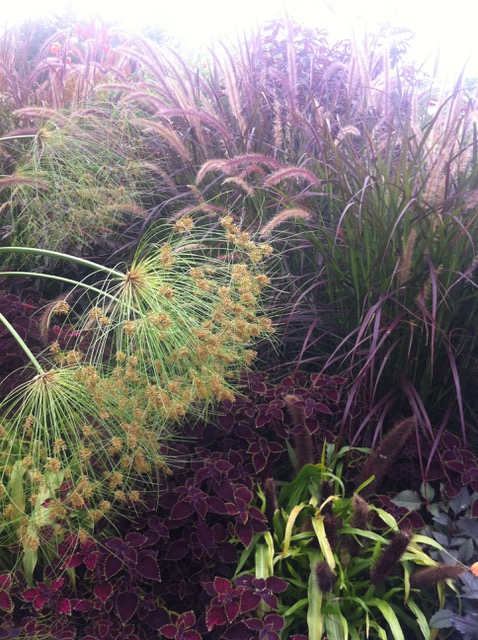