Upon my first perusal of Allan Armitage’s Fourth Edition of Herbaceous Perennial Plants; A Treatise on their Identification, Culture, and Garden Attributes—all eighty pounds of it, I swear—I was overwhelmed by the enormity of the undertaking. I was actually reminded of my previous life as a Delta Airlines employee, particularly of days in the 1990s working the ramp at our Cincinnati hub, which then operated about 350 mainline and maybe 600 or 700 regional flights a day. 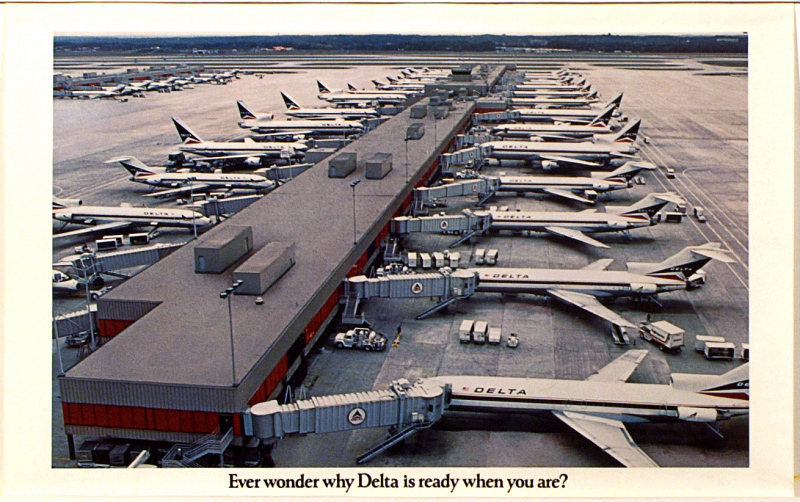 Our terminal sat between the two primary runways and every evening about twilight I would try to take a minute or two to watch aircraft coming in for our big 8PM push. Like the brightest stars you’ve ever seen, forever into the distance, pairs of landing lights. It was beautiful. It was impressive. It was humbling. And it meant a lot of work to do! And in the back of my mind I knew that the CVG hub was but the smallest of several, all in their own throes of inhaling and exhaling flights, all part of something bigger than them and none of them as big as the Atlanta mega hub. ATL was easily over twice our size. Probably 100 gates all empty this minute and filled the next. How could I not wonder how something this big ever gets built? System wide, thousands of planes. 100,000 employees. Almost all 50 states. Dozens of foreign countries. Operations. Reservations. Marketing. Etc. Etc. Etc. Yeah, I would look at that big, beautiful view, think about all these things, and say to myself, “Holy shit!” I was a ramp worker then, and ramp workers cuss at least once a sentence.

I’m a Horticulturist now. And a writer. An award winning writer, as a matter of fact, and therefore supposedly good with words, and you know what? Armitage’s new edition? Holy shit!  More species and cultivars than anyone apparently wants to count! Usually, the marketers of these books proudly exclaim the number. of entries. This one conspicuously doesn’t. So I’ll go out on a limb with a wild ass, Dr. Evil-like guess, and say this book describes over a million perennial species and cultivars. This volume is simply massive. Encyclopedic! It’s interwoven with advice and opinion based on seeing, breathing, and experience. It is filled with a zesty sense of humor, and, of course, right out of the starting gate it is instantly out of date. At today’s pace of new introductions, maybe 100 or a 1000 more varieties have hit the market since the book was released last summer. That’s just how it is these days, and it sure as hell ain’t going to change. Nevertheless, I’m going to say something that might surprise you. Unless Dr. Armitage finds the time and energy to publish a fifth edition, this book is likely to remain the most comprehensive and up-to-date such single source tome for a long, long time. Maybe forever.

The problem is this. If you wanted to start Delta Airlines from scratch today, you couldn’t. Something that big can only be built incrementally over a great period of time. The same applies here.  Allan Armitage has been at the center of perennials for over fifty years. He is tireless, passionate, knowledgeable, affable, well-liked, been everywhere, knows everyone, and, between his academic career, speaking schedule, and writing, no one else is anywhere near as uniquely positioned to be the black hole of the perennial universe. The first edition of this book appeared in 1989, and, featuring a few less species and a trillion fewer cultivars, weighed in at about half the pages of the current volume’s 1100.  Nevertheless, even back then it was a massive undertaking! But, it served as the foundation for the second edition, and that the third, and that now for this current fourth edition.

The question is, what if he doesn’t write the fifth? Or, for that matter, if Michael Dirr, the yin to Armitage’s yang, is done updating his Manual of Woody Landscape Plants—itself a behemoth which added over 2000 new varieties to its heft when the ninth edition was published—holy shit!—way back in 2009? So if Armitage and Dirr, both of whom remain active and involved in many different things despite being well into “retirement age,” have decided to mothball their IBM Selectrics, who are the connected, hard-working, ambitious young gun writers ready to fill the void? Do you know anyone?  ‘Cuz I don’t.

Here is where someone says, “Get modern Grandpa. This is what the internet is for! It’s infinite and instant. It’s nimble and, damn,  it’s forever.”  Okay. Alright. Let’s google  a perennial. We’ll even choose a well-known top seller.

Geranium ‘Rozanne:’ 321,000 results. Websites of the breeder, grower, and a thousand nurseries all love it. They are all happy to sell you on every good thing about ‘Rozanne.’ But, hey, that’s no surprise, is it? Then there are umpteen hundreds of blog posts all blathering boatloads of opinion about it. Great! But who the hell are these people? Are they some great expert or just another dumbass? A few screens down, you might find a description by a horticultural society or a public garden. Expert maybe, but utterly devoid of opinion. Reads for some reason like it was written by an introverted horticulturist’s lowest rung intern and then sent up the entire timid and second-guessing chain of command and then back down. Useful as, well, this: “Zone whatever, this high by that wide, leaf margins are scalloped…” If you’re lucky, you might turn up a mention in a trials report or possibly a “best of year” nod by a university, botanical garden, or trade group, but, if you set out wanting a quick easy place to learn what a plant looks like, where it will grow, and a credible opinion on if it should be grown, the internet is a let down. So, where do you turn? Armitage’s and Dirr’s books. Even if they’re somewhat out of date. Or possibly, ironically, Armitage’s app.

Fact is, these books are as valuable now as they have ever been–for gardeners, for the industry, for future waves of Horticulture students. So who buys the franchise? Who picks up the mantel?