Canna, hot greenhouse fantasies, and the brutality of ice. A Letter to the Midwest.

Well, I think we’ve established that you’re the better person at this point.

As we will not agree about using shallow phrases for the sake of filling socially-distanced space, let us discuss plants instead. We can start with that canna of yours, which, had you stopped typing your letter and finding new ways of shaming me, and instead gone outside and dug the damn thing out of the friable and fertile Midwestern soil; you might have saved.

I know, for we have talked about it, that you know what you’re doing when it comes to canna, and therefore you know that those rhizomes would have been just fine if the soil had not already frozen, especially as..er…Kevin…seems to be planted by a rock wall. Thus I can only assume you named the plant and took the photo to garner sympathy.

Seems so unlike you. 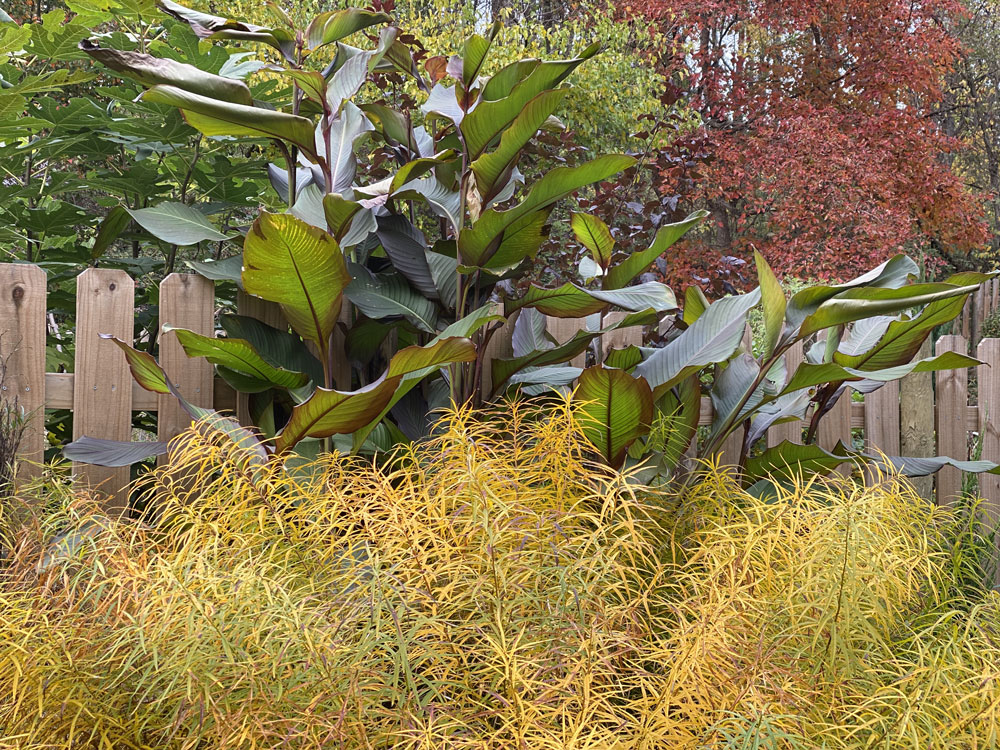 How’s that for a bit of autumn temperate/sub-tropical splendor?

(BTW – I’m totally with Elizabeth on the subject of anthropomorphizing plants.)

Here in 6b/7a Land I do have the odd canna make it through the winter, though it is always because we haven’t had the winter we deserved, and it is always C. indica. Apart from the ‘hey ho!’ moment of surprise and joy, the weeks afterward are usually anti-climactic.

Those that survive take all season to have half the vigor of their cold-framed cousins, who begin in warm soil and end in warmer summer beds.  My rock walls are in shady areas of the garden, and offer only the indignities of etiolation for those that would seek warm microclimates.

I am currently searching for a reliable source of ‘Cleopatra’ – the canna with a chromosomal identity crisis that manifests in lashings of deep red against otherwise green foliage and yellow flowers.  For two years in a row I ordered it from a reputable nursery only to find, come spring and sprouting, that the rhizomes had lost their youthful desire to stand out, and Plain Jane green had won the existential fight. 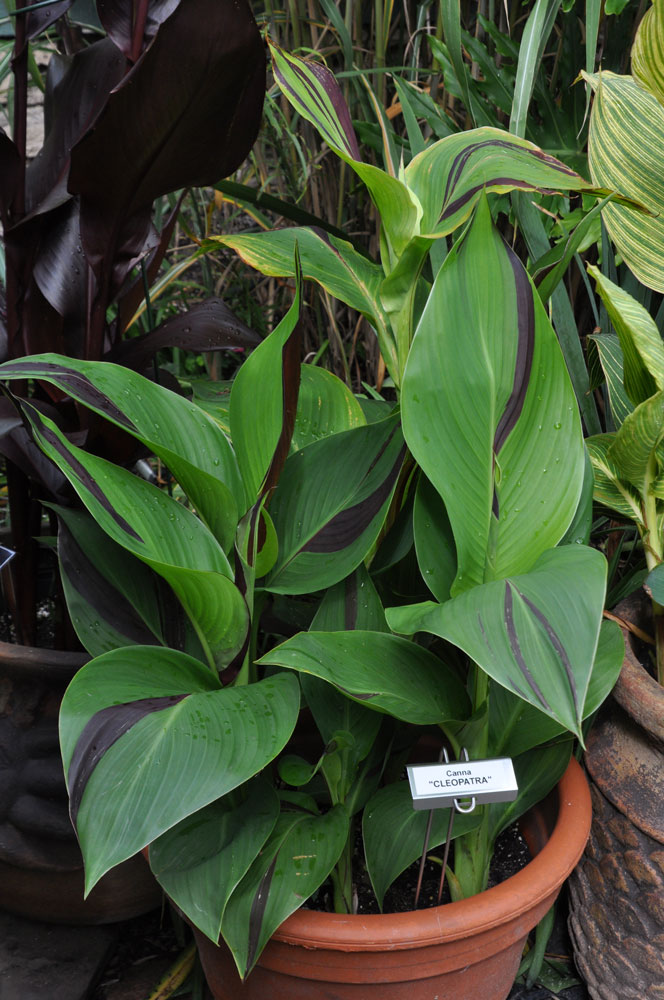 Canna ‘Cleopatra’ in a Buffalo, NY garden. Sadly, not in mine.

The nursery cheerfully refunded my money – twice – noting on the last email that they would no longer carry ‘Cleopatra’ as they’d found it too unstable (Marc Antony might have felt similarly).  I haven’t yet decided where to gamble my money, as it truly is a gamble when one is buying dormant rhizomes, and an entire growing season of shock and awe might again be lost to schizophrenia.

As you are into shock and awe at the Zoo, I would imagine you grow expensive drifts that number in the hundreds.  How about a quick division wrapped in brown paper and tied up with string for your favorite Mid-Atlantic persecutor?

Speaking of persecution, a plant friend has asked if I can babysit a large assortment of his precious plants as he begins to find his feet in a new city several hours away.  Of course he asked this innocuously enough early last spring, when one says yes to everything because the season is so full of promises and potential. I may also have been drinking Prosecco.

Well, he re-asked the Big Ask two weeks ago – just after our first big snow and after I’d dismantled all the cold frames in preparation for the big kitchen garden re-jig next spring.  If he were just a normal friend and not a plant friend it would be one thing, but he is most definitely the latter and you know I’ll be judged when he eventually returns and finds the lot of them etiolated and sulky.

Mind you, he’s moving north so he may have grown that way himself. 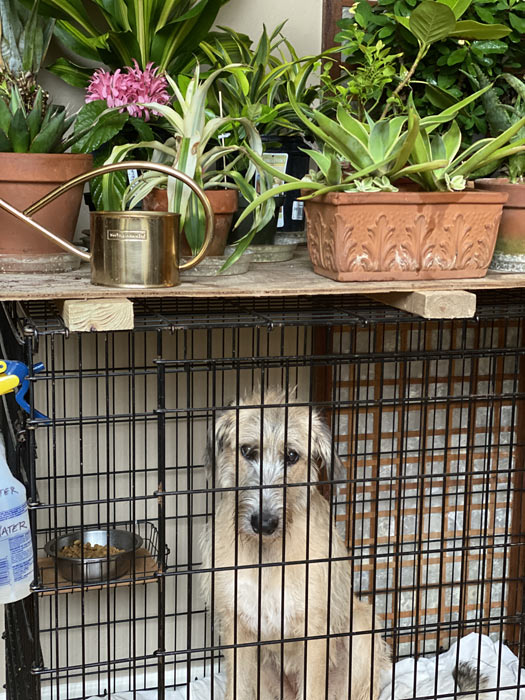 My current tender plant indoor storage area. It really doesn’t get much more down and dirty than a dog crate, two by fours, and a sheet of plywood. And yes it’s in my living room.

I told him I could obviously take the epimedium, which is to say, he’d probably never see them again (the guy’s got good plants and how am I expected to remember where I hid planted them on a property this size); but I’d need to farm out the succulents and various other high-light lovelies that will laugh at the lumen situation in my house.  Laugh…and stretch.

My brutal answer when dealing with my own tender succulents is to either take cuttings in fall and set up lights in a cool basement, or to ruthlessly pinch them in their second month indoors so that they are not so much succulent and sumptuous, as they are dismembered and disheveled. This way they spend the next two months trying to regrow plump leaves from callused stems. Etiolation is the last thing they’ve got the energy for.

(This, BTW, is not something they teach in any reputable horticultural program – I’m basically just buying time till March and cold frames.)

This year we’re going for the second option.  Michael’s taken over my basement table as his new work-from-home pandemic desk, and he’s currently sharing it with a two-foot pineapple.

Two months ago, I had the courage to investigate what I might be looking at in the cash department were I to spring for a nice greenhouse.  And by ‘nice’ I mean, not as basic as 6-mil plastic stretched over galvanized hoops; but not as libido-inspiring as the installation of a knee-walled and double-doored Hartley Botanic masterpiece. (Though I did option it with one thermostatically controlled vent.)

One of my hottest fantasies – and that’s without the staff gardener. (photo: Hartley Botanic)

‘Nice’ looks like ten grand – as long as we do 100% of the installation work. As this represents about half of the median full time writer’s crumbs according to The Author’s Guild’s 2018 Author Income Survey, the paperwork is currently filed under ‘S’ for ‘Sell a Kidney.’

Please don’t tell me to slap together a bunch of reclaimed windows and make something rustic. That 20/30-something dream died a painful death after fifteen years glazing, scraping, and re-painting elderly windows in my last home. And then doing it again fifteen years later.

After many years in old houses accustomed to drafts ’round the ankles it was extraordinary to move to our current home where the owner/builder had splurged on good, double-paned windows.  They are 40 years old, and certainly the technology has moved on, but the difference between old and ‘not as old’ is so telling that I cannot help but have it inform my decision on the greenhouse front.

No, rustic is out. I need something as tight and cleverly economic as I can afford, for heat is expensive and I do mean to heat it. 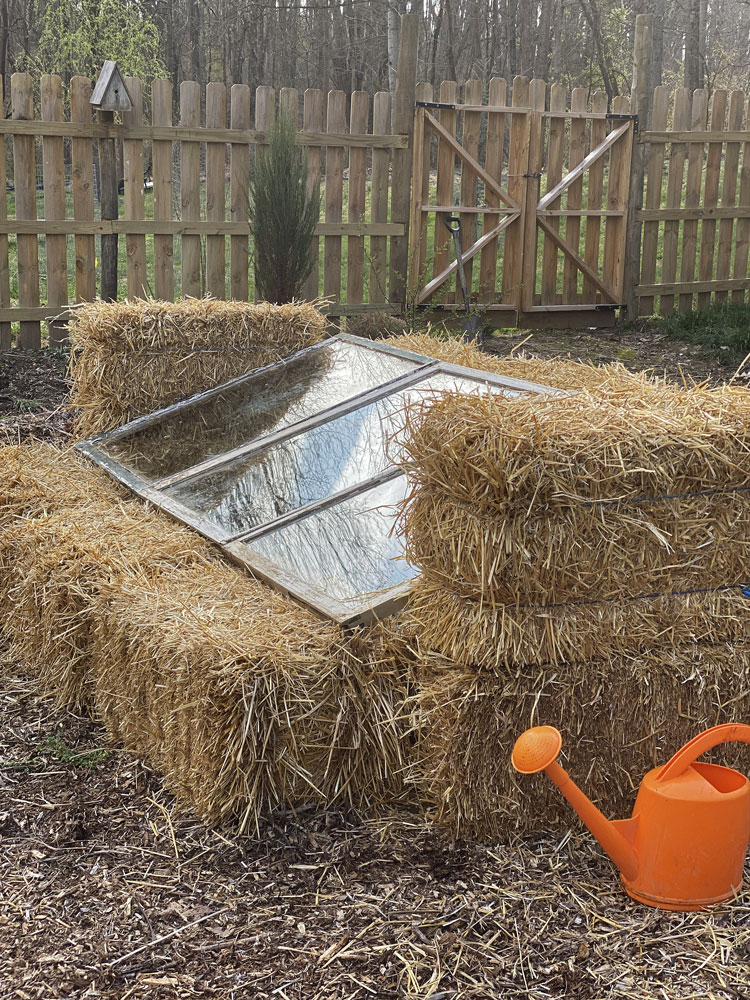 Current greenhouse situation for newly potted up canna, etc. Not saying it’s not working, but it lacks a certain flourish….

Greenhouse ownership brings its own set of problems of course, and be assured I am thinking about them with eyes wide open. Much like the gravel I am planning for the kitchen garden overhaul, there are hidden pros and cons.

Old, dirty and dusty gravel is one of the best germination media out there, but I shall give myself a running start with a comprehensive cover of three inches of newish stuff over fabric on all areas that are not beds. Yes, the weeds will come, but not as they come now — pampered in an ever-decomposing mulch. In addition, propane weeders and gravel are kindred spirits, whereas one never knows what could happen on a dry summer’s day with wood chips at your feet.

I plan to discuss all of this outrageous profligacy with Michael in February. I also plan to have the conversation in the vicinity of his grand piano.  Stay tuned.

With regards to Michael, and coming back to a touchy subject perhaps, I asked him about the phrase “Thank you for your service” from your last letter, as I know that he tends to appreciate silence over patter on the subject of his time in the Marine Corps, and that he feels immediately self-conscious when someone says this to him.

He joked that “Let me buy you a beer” is always appreciated, but failing that, there is no need for words to fill the space.  “Cool.” works in a pinch. “Which branch?” works fine too – but only if you find yourself starting to say something incoherent about C-rations and bunkers.

Simply stated: It is. It was. He is thankful, and proud, and it is done.  Perhaps he is odd compared to his fellow service men and women, I don’t know.

Overall Michael is a good-natured soul, filled with jokes and silliness that would thrill you, and which perpetually stand in stark relief to some of my more militant moments. But you’ve probably gathered that already. 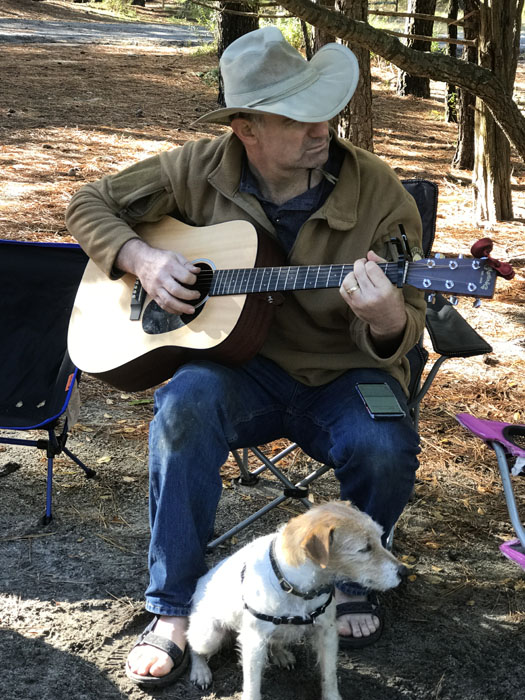 He looks pretty tough here, but the reality is, he’s probably playing Bread.

If you can tear yourself away from your new journalistic obligations (congratulations!) and Facebook overshares (no comment), I would love to hear your thoughts about the look and structure of your garden during the winter months.  I had a dream last night that a plant friend from the UK visited my garden in January; and as we went into the house after tramping past the broken stems of snowdrops and hellebores, and sodden, pitted turf, he remarked “Well the trouble with gardens in this climate is that so much is brought so low by the brutality of ice.”

The conversation may have been fictional and a product of my restless mind, but there is truth there.  I can’t help thinking what the grasses and evergreen ferns would be and for how long without the breaking weight of ice storms.   There will be many more before the bright yellow swathes of eranthis signal a change in seasons.

It is cold here, as it should be, but thankfully not too windy. With the Solstice we are slowly moving toward the light, and those incremental minutes will eventually make themselves felt all at once one late winter evening at dusk.

Stay good natured, I’d hate to think I was partially responsible for yet another conversion. And a very happy and hopeful New Year to you and Michele.  I am strangely hopeful myself.

P.S. Since the writing of this letter, and the posting of it, my plant friend has visited sans his refugees.  I guess the abnormally long time it took me to answer his text conveyed the undercurrent of dismay at his plans. I started to feel guilty, but got over it when I found scale all over my justicia (of all things) this morning.  I’ve only got so much bandwidth for High-Maintenance Partners, and no interest in adding more.

P.P.S Go dig up Kevin. He who dares wins.

A weekly newspaper columnist for over a decade, she also frequently contributes to Better Homes and Gardens, The American Gardener, and other digital and print magazines; and has won national awards for her popular column and blog, Small Town Gardener.    Marianne has recently begun working as a guide with CarexTours, a D.C. based tour company dedicated to exploring public and private European gardens in a small group experience.