On the legacy of our country neighbor, Otis Knox 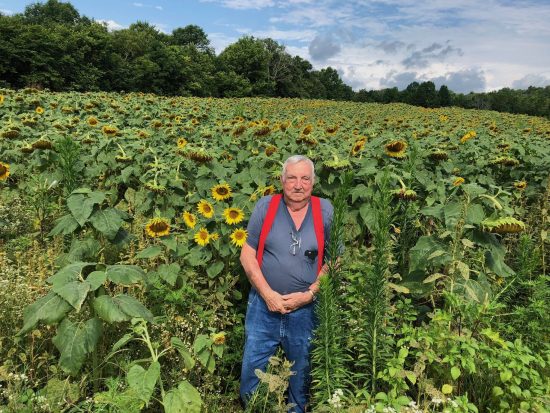 Otis Knox in his 2018 sunflower field.

I would not have batted an eye at Mr. Stripey if Otis Knox had not insisted it was the best tomato—ever. It matters little whether this is true or not. Otis signed off on the heirloom, and that’s all I needed to know. For weeks this summer, I have made Mr. Stripey tomato sandwiches on toasted white bread, smothered with Duke’s mayonnaise. I haven’t jumped ship, yet.

We were an odd couple. He—the poor country boy from Gritter’s Ridge, near Rogers, in eastern Kentucky; I—the privileged suburban boy from Louisville. He tilted right; I leaned left. Neither birthright nor party affiliation was a deal breaker. Our mutual affection was forged by friends, neighbors, love of God, trees, storytelling, music and even—tomato sandwiches. 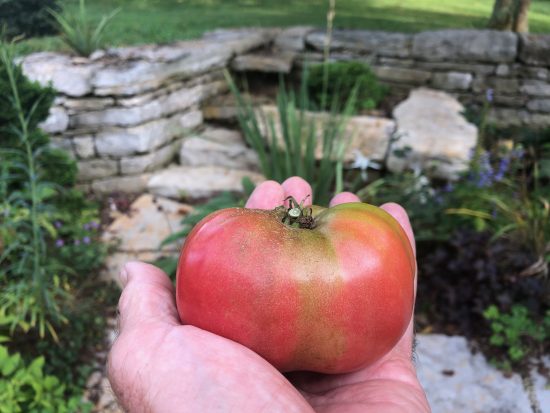 Rose and I bought ten acres in North Mercer County, on a bend of the Salt River, in 2010. Neighbors asked if we had met Otis. They rolled their eyes when I answered, “No.” I wondered, then, if this was a warning. I understand, now, it was a tip for:  You’re in for a treat.

I waited to meet Otis.

Otis and his wife Ilene once owned our farm. Our county-maintained road is named Knox Lane in their honor. 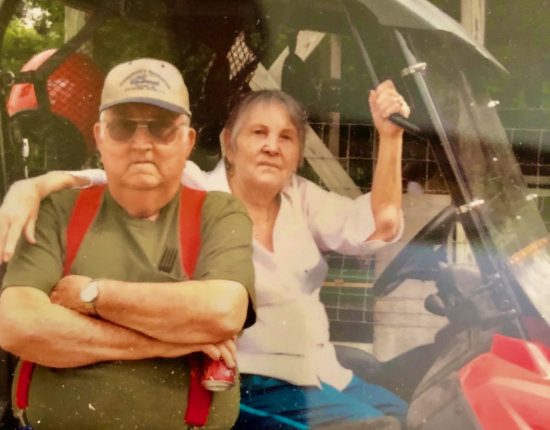 He heard through the North Mercer County grapevine that we had cut down a large white pine to put in a graveled driveway. He wasted no time before telling me, graciously and unequivocally, that he was sorry to see one of his precious trees cut down.

Otis had dug small, white pine seedlings from a hillside, near Ilene’s Wolfe County home place, to plant shortly after he moved to our farm in 1976. 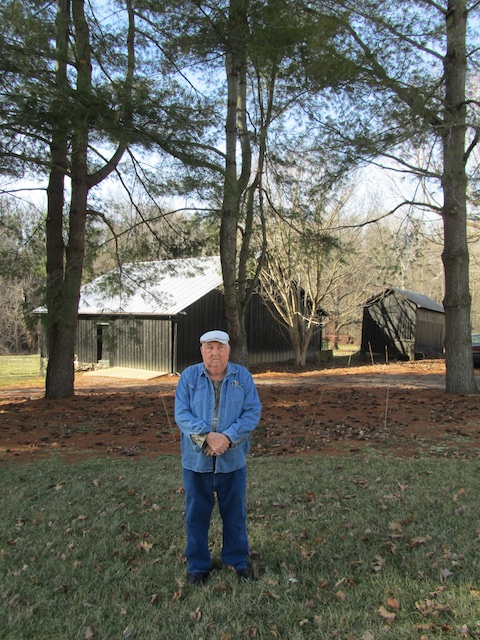 I tried feebly to explain that I loved trees and planned on planting more pines, oaks, hickories, sassafras, yellowwoods and persimmons here on the farm.

He remained devoted to his pines, even after he moved across the river in 1990.  Rose and I planted hundreds of trees before he was convinced that he could trust me on trees.

My sister-in-law, Holly Cooper, a few years later, spotted a peculiar witches’ broom in one of Otis’s pines. Later on, my arborist friend, Robert Rollins, cut some scion sections with a pole pruner and they were grafted onto white pine seedling understock. I anointed the new, dwarf pine tree Pinus strobus ‘Otis Knox.’ I offered Otis his progeny, but he said he’d be happier if I gave it a home, where it belonged—here on the river. Otis, the tree, five years later, is a healthy, slow-poking, one footer. (An ordinary white pine seedling would grow to three to four inches in five years.) 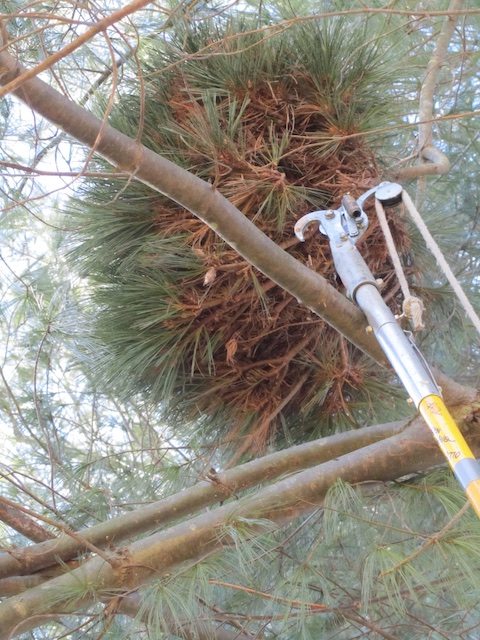 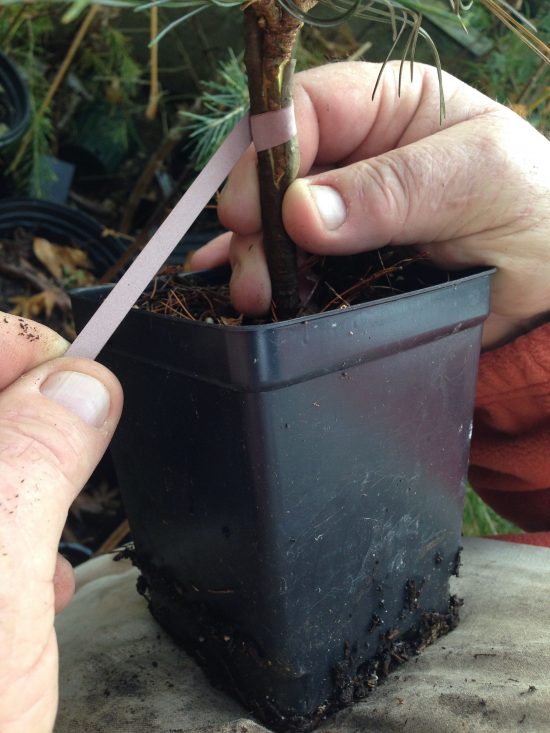 Our Salvisa farm expanded to 47 acres.

Soon Otis was visiting regularly. He brought his wife Ilene, his sister Edith, and his brother-in-law, Kenny, to show them what was going on. This was a subtle vote of confidence. Otis pointed out the crooked but still graceful chicken coop and corn crib he had built years ago.

Otis once ran cows on our place and planted corn and cut timber. He worked days as a tool and die maker at I.B.M. in Lexington. On many Saturday nights, friends came over. He and brother R.D. played music from a hay wagon, in the bottomland below the barn. R.D. passed in 2012; Ilene in 2014. 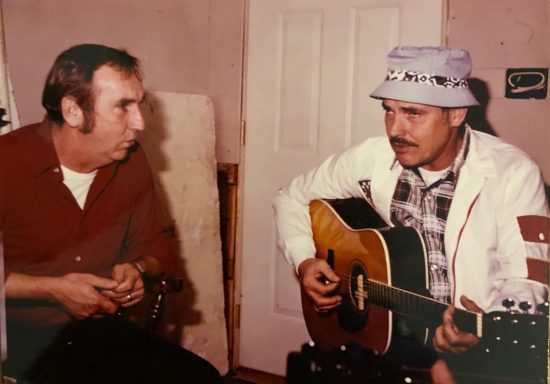 Otis lived alone but was not lonely. He enjoyed company. Lots of company. I began to see more of him. We loved University of Kentucky basketball. Rose and I didn’t have a TV then, so he began inviting me to his place to watch games on his big screen. He sat in his recliner; I took to the sofa. Basketball games were an excuse for storytelling. The games were muted, while Otis launched story after interesting story about his many adventures and misadventures.

Saturday evening basketball games were pushed aside for the Marty Stuart show on RFD-TV. There was little talking when Marty started picking. Rose and I became fans. We saw Marty and his band at Lexington’s Opera House on Saturday March 7th. Marty Stuart and His Fabulous Superlatives were, indeed, superlative.

Coincidentally, the first Kentucky Covid case had been diagnosed earlier in the day.

This was our last night out.

The pandemic was underway.

I continued to visit Otis, masked up, once or twice a week, and talked to him every day. Carla, his beloved niece, took care of Uncle “Oat.”

Otis had an appetite as big as his heart. Carla liked to cover fresh biscuits with chocolate gravy for breakfast and fry crappie filets for lunch. The refrigerator was always stocked to the gills.

The Peachey family, seven of them, would also phone and sing songs that Otis loved.

Mark Peachey leased land from Otis, where he grew soybeans, hay and the most beautiful field of a sunflowers I have ever seen. Otis loved his sunflowers. 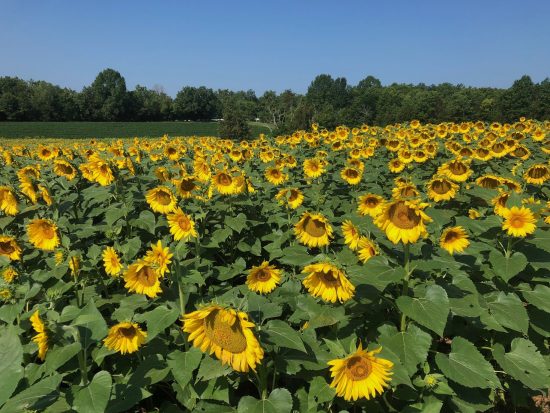 Otis called a couple of times, in late spring and early summer, and asked me to take him to drive-in church services on a hilltop at the Kirkwood Baptist Church. The congregation sang old country hymns from cars and trucks. I didn’t know the words to any of the songs.  I was a woefully ignorant Episcopalian, good with Beethoven’s Ode to Joy, and weak on Old Rugged Cross, but I was very happy and humbled to be here with my friend. No mask could muffle Otis’s beautiful baritone or his uncanny recollection of so many old songs that he was happy to sing anytime—anywhere.

“Precious memories, how they linger
How they ever flood my soul
In the stillness of the midnight
Precious, sacred scenes unfold.”

Otis was hospitalized three previous times this year with a variety of ailments. He seemed down for the count each round but proved remarkably resilient and kept bouncing back. On his third hospital stay in July he had been unresponsive for several days, but his health improved again.

He began singing from his room at the end of the hallway. A patient across the hall, came over and said, “I know that voice.” She remembered Otis and brother R.D. singing at one of their impromptu shows long ago in the small town of Duncan, down the hill from Cornishville. Otis told me he and R.D. had sung on every hilltop in Mercer County. When Carla wheeled him out of the hospital to go home, Otis sang his way down the hallway.

The nurses loved him.

Otis did not survive his 4th hospital stay. He slipped away before he could return to his 150-acre farm and the little tomato patch—full of ripe Mr. Stripeys.

The past few weeks, since he left us, I have continued with a ritual, lunchtime tomato sandwich every few days. 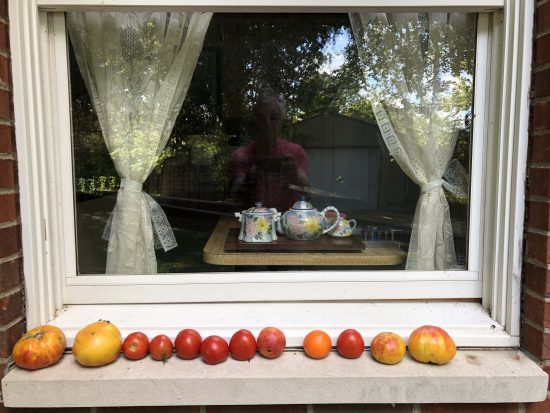 The tomato line up at Otis’s—Mr Stripey on either end with Early Boys and Chef’s Choice (yellow).

I look out the window and see Otis’s white pines.

I am drawn closer to a handful of pine seedlings.

Listen to Otis talk about the Knox Lane farm.