A Humbling Return to Veggie Gardening

I knew full well what I was getting into. My dormant gardening genes from my father’s side kicked in back in 1987, soon after my wife and I bought our first house. I had grown up around gardens. My Dad had a rock garden in the backyard and also a vegetable plot in a nearby community garden. I loved working in that veggie garden until I reached an age where sex, drugs, and rock and roll proved to be worthy distractions. But I did have that early exposure to both vegetable and ornamental gardening as a kid, and when I got that first piece of ground and those genes reared their ugly heads, for some reason I focused on food. Later on, at our second house, it turned to all things ornamental. 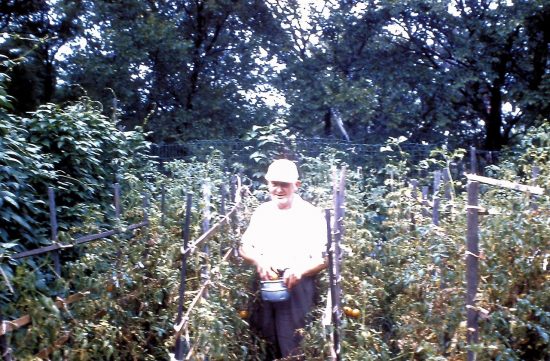 My Great Grandfather in his vegetable patch. He planted tomatoes he would never harvest even after being told he had only a few months to live.

That first vegetable garden quickly became all-consuming. It started large and then got larger. Began with a few tomatoes and peppers. In three or four years, we grew every vegetable we could buy from the catalogs. We also had a small orchard, grapes, and raised rabbits. We were tapping our maples and making wine. The joke is that things got so out of control that we had to move. And so we did. To a house we had long admired only a tenth a mile up the street. 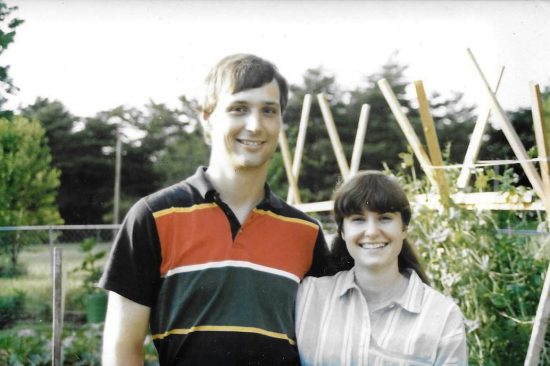 Although I had every intention of starting a new, albeit scaled down, veggie garden at the new house, it never happened for a variety of reasons. Mainly, the space I had set aside for the veggie garden we later learned had been at one time a gravel driveway. Compacted beyond belief. Almost like concrete. So it became my propagation area/mini nursery until June 2019, when we wound up hosting my son’s wedding in our back yard. The listing, rusting frame of my hoop house was deemed a poor backdrop for such an esteemed event, and so it went to the scrapyard. In its place, finally, went some raised beds, a grape arbor, and some veggies. Last year, I dabbled a bit. This year I dug in deeper. 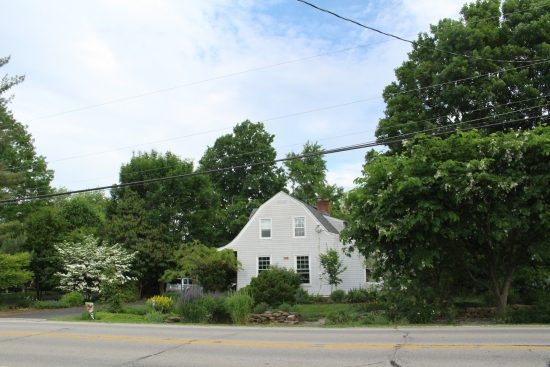 The new house, which was in fact way older than the old house. A Dutch colonial whose ground lured me into ornamental gardening. 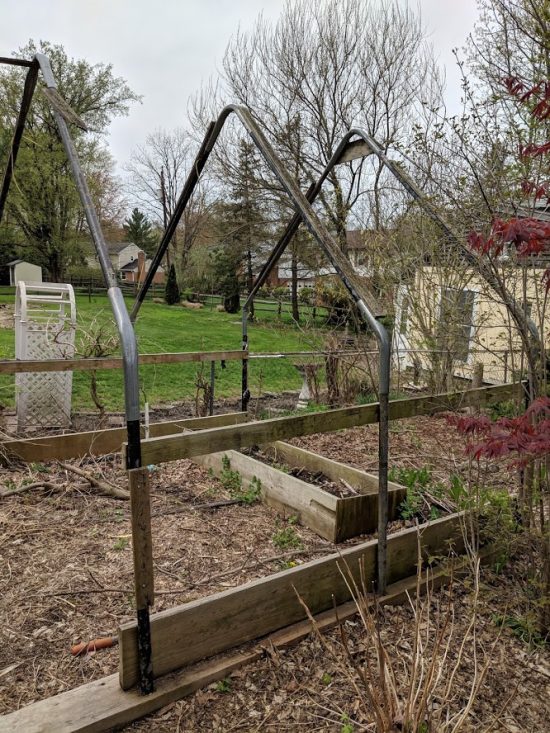 The old nursery before it was removed. In the background is my neighbor’s backyard. The shrub that is trying to hide the yellow playhouse is the one I removed to let in more light. Which it did. It’s absence is also what allowed Clyde the Klutzy Deer access.

Again, I reiterate, I knew full well what I was getting into. I have always enjoyed irony, and my favorite ironic moment in the world is when, having learned that I work in Horticulture, someone says, “Hey, I’m thinking of getting into gardening, but nothing hard. Just some vegetables. Maybe a fruit tree. Possibly some roses. Got any tips?” “Yeah, think again!”

So, yes, I knew a return to vegetable gardening would have its ups and downs. I expected some disappointments. Still, two things wound up catching me by surprise. First, was just how emotionally invested I became in this new part of the garden, and, second, just how total was my failure! I tried denying much of it for a while, but then my humiliation was complete when I recently had cause to tour a nearby community garden. There, in plain sight, I could compare the overflowing bountiful harvests being enjoyed by some twenty or thirty area residents, all of them mere amateurs, as the image of my own barren wasteland periodically popped into my head. As we walked about, I continue to pose as a respectable horticulturist, but multiple times I almost fell to my knees and confessed everything. But, in the end, I said not a word. Tried to look normal. Twice, I managed to suppress my chin from quivering. Kept my insecurities and doubts to myself. I don’t think the woman who was showing me around suspected anything. 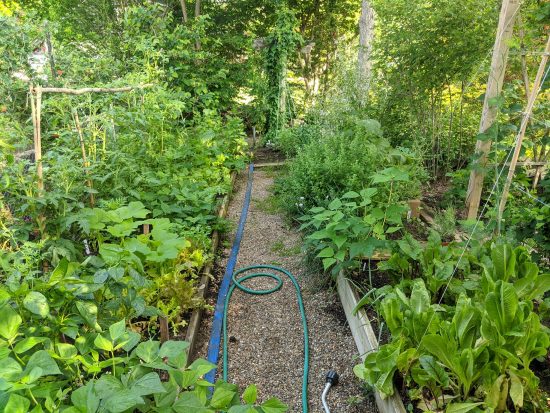 The barren wasteland. A field where dreams go to die but where shame and humiliation flourish. In case you’re wondering, the flat blue hose runs backwash water from the swimming pool to the back of the garden, and, yes, it pretty much lives there. I’m only inspired to put it away when esteemed visitors come. Not for photographs.

In my defense, my garden is prettier than any that I saw there, and we did harvest some lettuce, beans, and garlic. And my tomato plants are beautiful. Ten feet tall, they are tied up to a bamboo frame in a straight row. They even screen the view of my neighbor’s yard from where we drink cocktails on the patio. It’s just a damned pity that the neighborhood cartel of squirrels got it in their stupid, disturbed little squirrel brains to cut off and partially eat my entire crop of beautifully developing green tomatoes.

And then there was a deer. I never have deer in my backyard. We have a four foot fence which is heavily planted on both sides with all kinds of trees and shrubs, so, having no place from which to launch and nowhere to land, they never visit. Until one day this summer. Like a bonehead, I removed one little extra shrub to make more light for my veggies. Never even occurred to me that I had just created a hole in the defenses. Two nights later, the world’s most observant deer, but also a very clumsy one, found the breach, got in, and busted off the one tomato plant whose loss could embarrass me. Read further for that story.

At a master gardener’s conference 2-3 years ago, I met another speaker whose name is Heather Pariso. She wound up offering to send seeds of a tomato that she had bred herself for me to grow at the Cincinnati Zoo & Botanical Garden. But then I lost the seeds, and then suffered shame when Heather checked in to see how they were doing. But then I found the seeds, and started them over winter in my basement at home. Sent Heather a happy email telling her so. I thought I would plant them at the Zoo, but then COVID-19 hit. Because I was working from home, I wound up planting one plant in my garden. How could I know then that the spot where I put it would soon be the very place where a klutzy deer (whom I named Clyde) would stumble around like a belligerent drunk? Of course Heather texted a month later to see how the plant was doing, and, once again, I suffered unbearable shame. 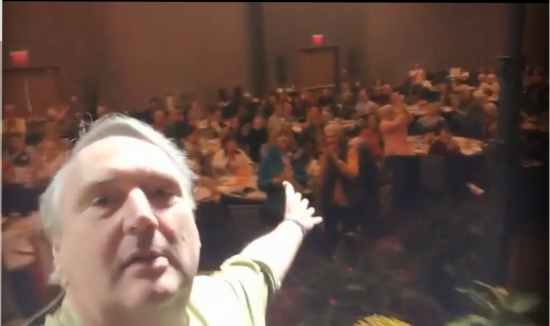 Me, more recently, receiving adoration from the master gardeners who attended the conference where I met Heather.

We’ve all known that person who brings in hundreds of pounds of zucchini to work and begs everyone to take some. I had dreams of being that guy, but ,nope, that guy turned out to be someone else. It sure as hell wasn’t me. My squash plants grew beautifully, put out hundreds of flowers. Know how many squash we enjoyed? Exactly one. That’s all that developed from all those flowers. WTH?

Does all this failure, humiliation, and shame mean I’m going to quit? Absolutely not. I’m nowhere near that smart, and I’m already making plans for next year. I might need more light, so I’m thinking of cutting down the gingko. Or the coffeetree. Maybe both. Maybe I need a truckload of manure. Maybe I need to buy a gun, learn how to hunt, and develop a taste for squirrel. I could try every potion in those Jerry Baker books, or sacrifice goats to various gods. I’ve got ideas. I can go all kinds of directions, but I can’t go back on the vegetable garden. Not now. It’s on, and I’m all in.