Back when the gardening bug really hit me, we were raising two kids and watching our dollars. Or, at least watching the few we acquired being whisked off to creditors. We had no extra money around to buy soil, plants, mulch, or anything else. Yet, I was obsessed, and I kept starting new garden beds. 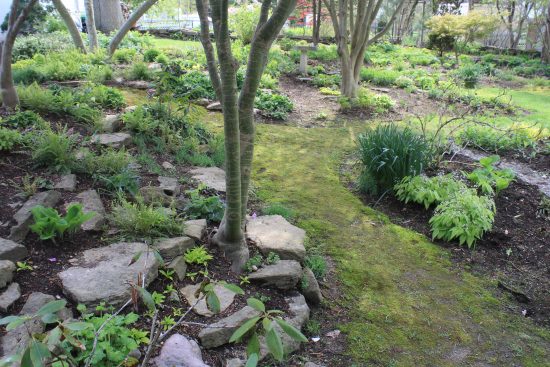 Managed this mostly by filling new beds with whatever flotsam and jetsam I could find–old bricks, rotten firewood, AMC Pacers, whatever, and then covering it all with a few inches of whatever soil I could scrounge. This could be small amounts leftover from landscape work, scraped off topsoil from the woods, and sometimes a sandy, gravelly mix filled with weed seeds from a nearby creek. 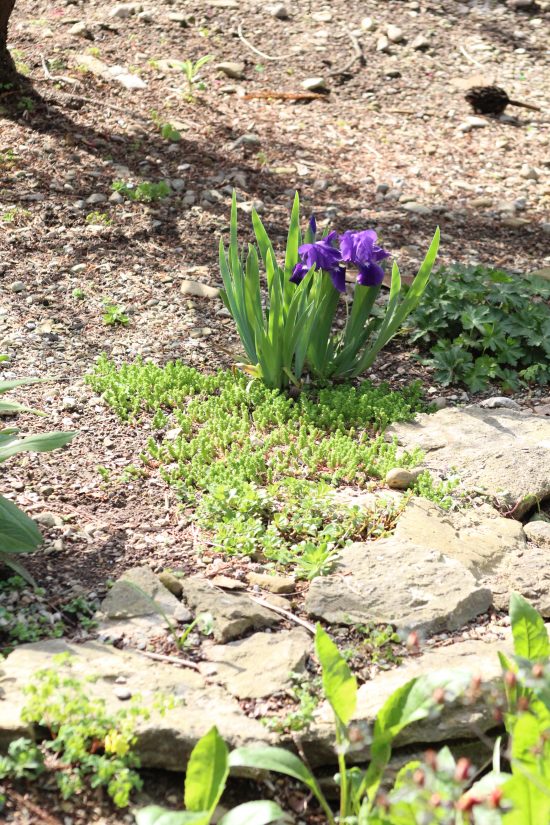 The soil in this bed consists mainly of gravel and sand from a creek bank. Very spare and quick to drain, but a lot of plants seem to thrive in it.

For plants, I was equally creative and unethical. A lot of things I grew from seed. Some of this came from seed exchanges and trades with friends, but I also kept a box of baggies in my car and on occasion, during my travels, seeds got into them somehow. 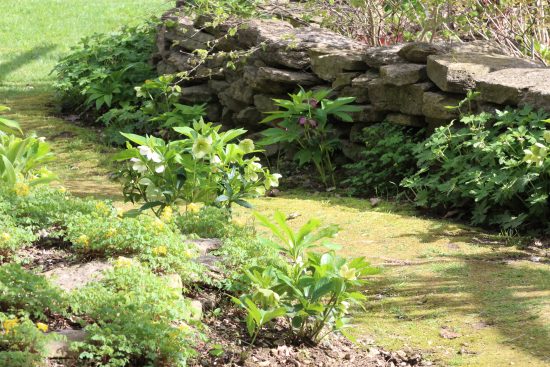 Seedling hellebores rescued from beneath their mommas. Great filler. As the area became shadier, moss moved in as the grass faded, and we love it!

I also pilfered rocks from construction sites and road cuts. A lot of rocks. All gathered the hard way. 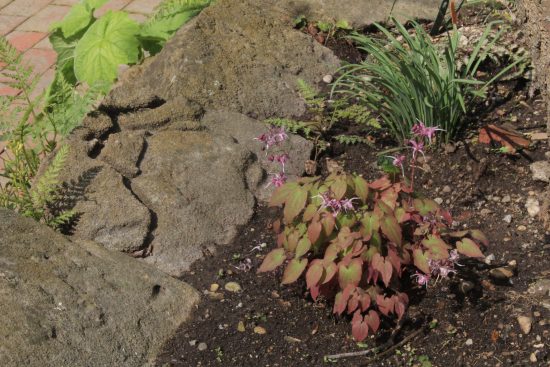 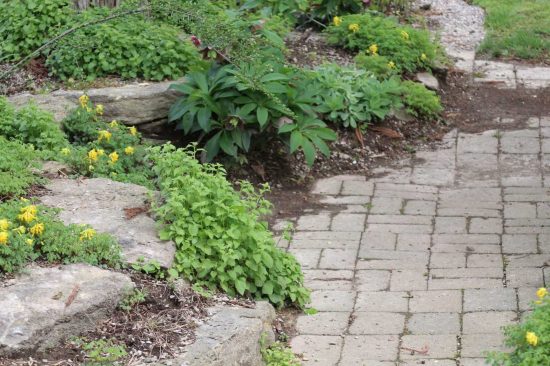 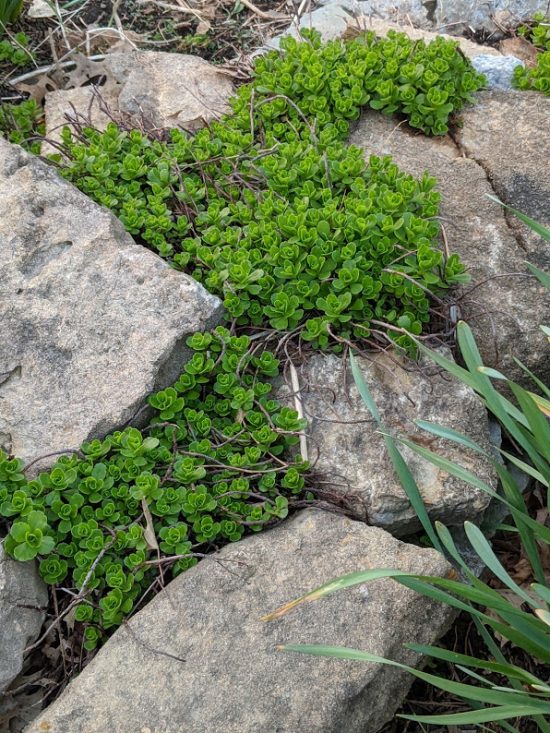 A typical raid would have me hit a construction site on weekends or after dinner when I could be reasonably sure the workers would be gone. There, many rocks were picked up and thrown into the back of my truck until it sat disturbingly low on its springs. The rocks were then brought home, unloaded into a wheelbarrow, and then placed in a wall or garden. I found I was most productive on a cold weekend day with a light rain. Hours would go by. Progress would be made. 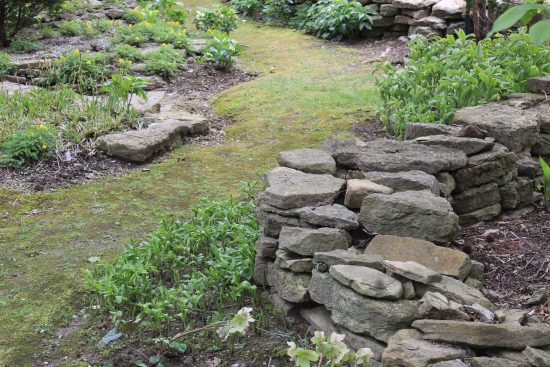 I estimate well over a hundred such trips. I have no idea how many tons of rocks I hauled, but I killed a perfectly good Toyota pickup, and a GMC Sierra, and umpteen wheelbarrows. My current truck’s condition is highly questionable. Thankfully, these days I’m not hauling many rocks anymore, and I don’t use the truck very much. 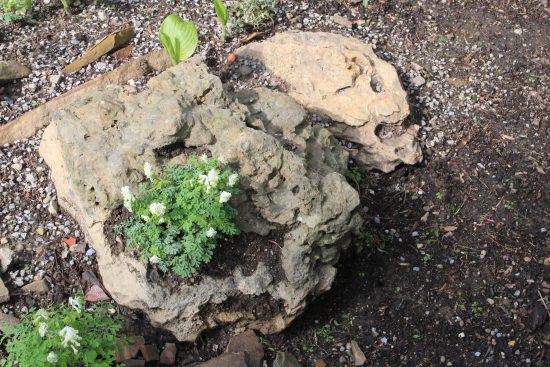 A couple of times I found rocks like these, which I think might be dolomite. No idea about the geology of them or why these were in the region.

As for lining beds and making walls, I had no idea what I was doing. Growing up, my dad had a rock garden, so I mimicked his technique of making naturalistic and pleasing curves to create sweet little planting pockets that would feature favorite plant s. I learned to use rocks also to create a little topography by retaining soil. That was pretty easy, and mistakes were easy enough to fix simply by picking up the rocks and putting them somewhere else. 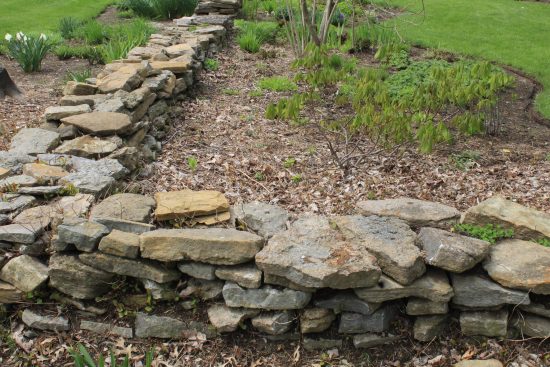 Walls were a little harder. Nope. Never read one book about making stone walls, and never Googled anything either. That would be just wasting time when getting something done beckoned. But I really liked old walls and wanted some to define paths and create pleasing lines. Over time, I learned to stack a wall well enough. It was never my goal to make professional-looking, perfect rock walls, and I must admit that I was very successful at not achieving this goal I never had. Our house was built in 1890. It’s the original farmhouse in the neighborhood. I was content to have my walls look like something an exhausted farmer would build as he cleared rocks from his field. No more, no less. 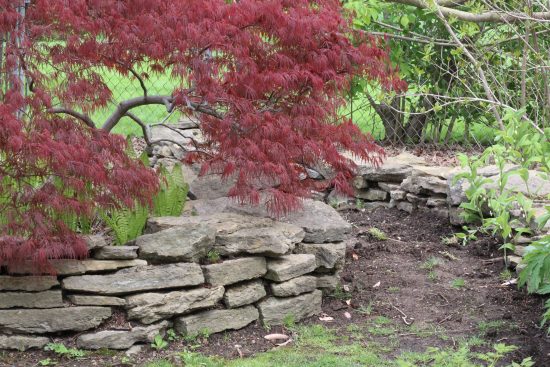 Oddly enough, I never really thought about the rocks themselves until I noticed my brother-in-law, a California boy, carefully studying the fossils in them. Having grown up here, I basically took fossils in rocks for granted and assumed everybody else did too. But, turns out, Cincinnati has a fairly unique geology. In fact, we have our own geological period in the Ordovician period called the Cincinnatian, which, sadly, hasn’t translated into any increased income for even a single one of us. Nevertheless, about 450 million years ago the entire region was a warm, shallow sea filled with marine invertebrates.These all lived happy lives with descendants that numbered more than the stars and over eons their calcium rich earthly remains settled in the muck and turned to stone. Limestone, in fact. Eventually, the ground rose up out of the sea and over many more years enough limestone eroded to create a thin layer of soil which has a pH of about 8. I garden in this, and, of course, can’t grow rhododendrons for shit despite many stubborn attempts. Other plants aren’t so fickle, however, and this limestone region is known for beautiful creeks, fast thoroughbreds with strong bones, and just the right kind of water for making bourbon. Oh, and if you’re paying attention, for rocks loaded with all kinds of fossils, about which I am gradually developing a fascination. 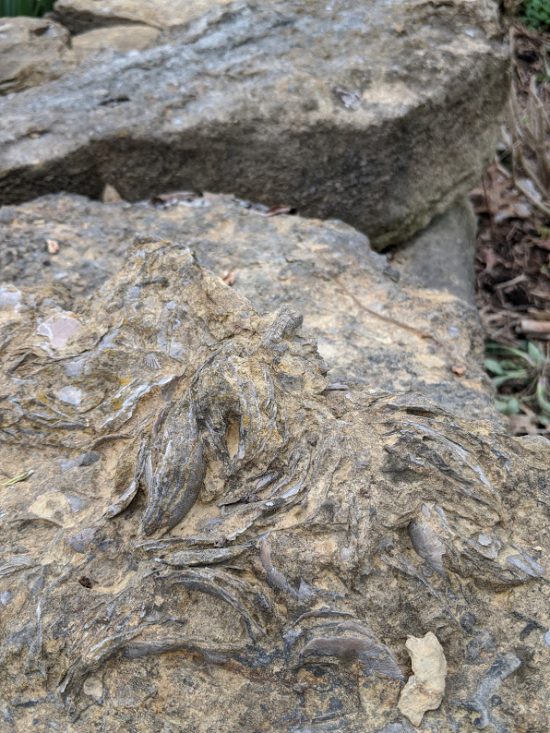 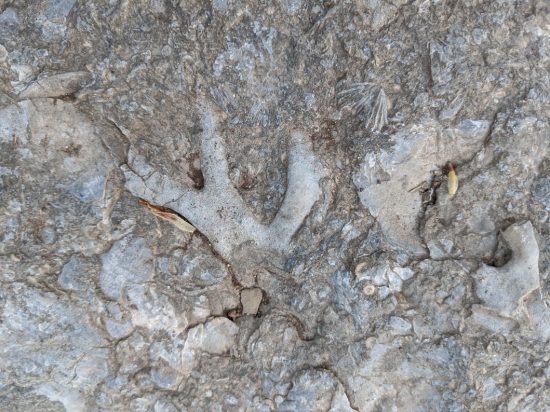 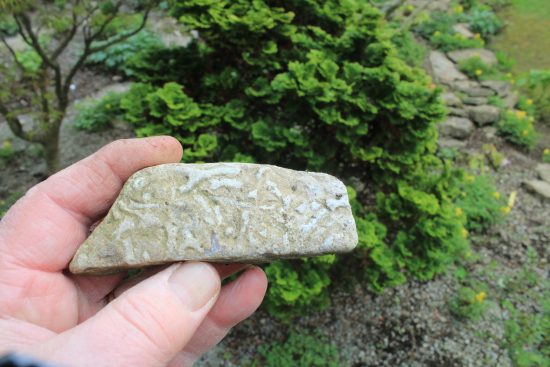 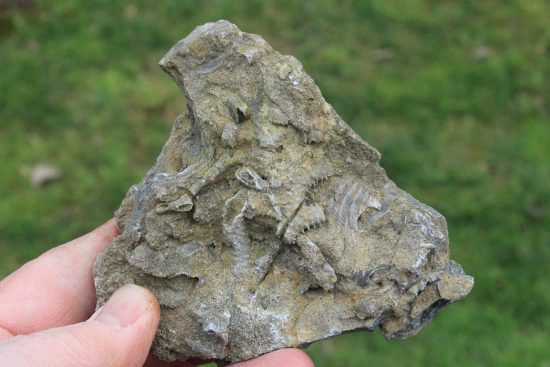 I gathered most of my rocks from two construction sites near my home. I’m up on the ridge top not far from the Ohio River. For whatever reason, these were mother lodes–high concentrations of rocks all pocked by clams and brachipods and other things. I believe these were true Cincinnatian period sites. I also collected rocks from road cuts in Kentucky, but these rocks were different, blue in color, often with fewer fossils, and more slate-like. I think these possibly came from deeper in the strata, but I really don’t know. I hope to learn more. If I do, and if I think about it, maybe I’ll follow this with a sequel. 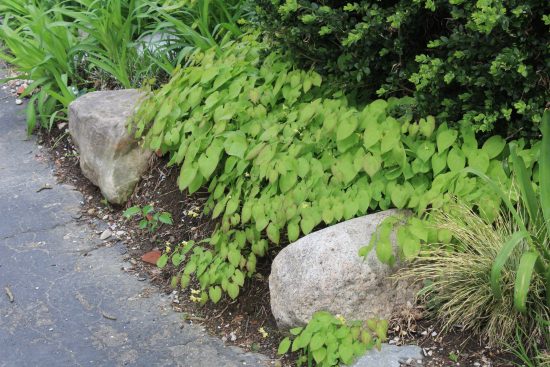 A few boulders were on the property and I’ve picked up a few over the years, but they don’t seem as natural here as the limestone field stone. 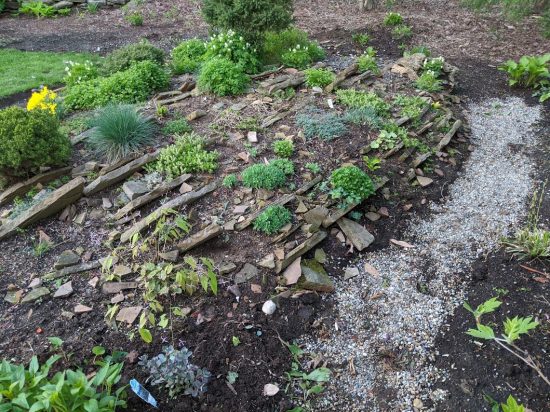 Likewise my crevice garden which is built with leftover sandstone flagstone. But it is a fun place to try to grow alpines and kill daphnes.

In the meantime, consider more rocks. Obsess about them even. Begged, borrowed, stolen, or even purchased, they add lots of interest to any garden. And, subjected to the elements, they only improve with time. 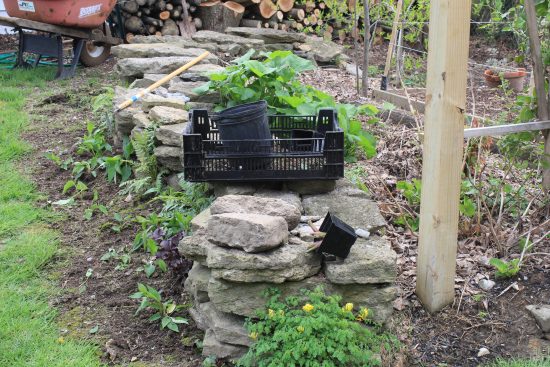 Rock walls are great places to sit and rest. And to think. And to set your stuff.