The Wife, the Flu, and the Ecstasy of Entering a Gardening Dream State: A Letter from The Midwest

What a treat it was to receive your letter dated January 22nd. And so publicly too! What fun.

Despite myself, I somehow got caught up in flights of fantasy borne from your descriptions of your bucolic existence in the benevolent hills far enough west of D.C. to be out of the gridlock and yet still safely within the outer rings of its wealth. You have a good life there by the fireside with your Jack Russell, your garden (which I imagine to be picture perfect), and your former marine (whom I imagine is likewise). 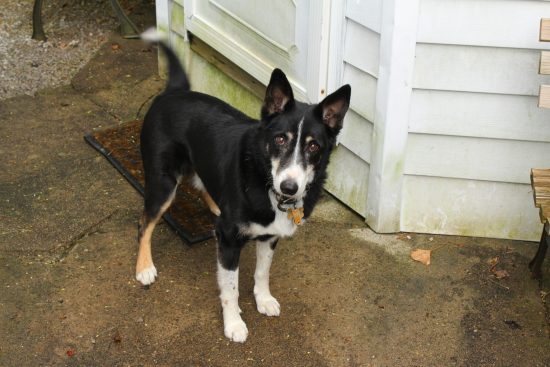 Here’s our dog. He’s a spastic, old, not so smart and mostly blind mutt at the end of a long line of people handing him off to other people. He’s a total pain in the butt, but he has a heart of gold.

In the end, however, I couldn’t help but be reminded of how different things are here in the bitter, gritty, gloomy, and surly Midwest. The temperature has been oscillating here so violently that it has cracked buildings, and one guy’s forehead. Saw it on the news. Even one of our six-story, brick skyscrapers suffered damage! Yet, it’s always gray. Gray, leaden, heavy, oppressive, American gray, English grey, depressing as hell, and a daily kick in the gut gray. And the rivers are all flooding. There’s worry the levy might break and wipe out the trailer park. Currently I’m cut off from my nearest source of a Big Gulp by high water. Oh, and everyone I know, including me, is sick.

This weekend, Michele, who is never sick, got the flu. Started Saturday while she helped me move brush and branches from around the yard to the driveway. She’s usually such a good sport, but she was kind of lagging and losing focus. I was getting irritated, because I’d been pruning like a maniac and the yard was starting to look like a log jam. Eventually, we had gotten it all into a big pile by my old, rusty truck that won’t start, being sure to make the pile as unsightly as we could and plainly visible to any county official who happens to drive by. Next thing I know, Michele is practically passing out. And I had hoped she would cook that night.

As you mentioned, Michele has a sweet smile, an amazing smile. And she was so innocent when we got married that I had to instruct her on how to use it with people such as police officers, bouncers, and the occasional asshole boss. But, when we both finally got in bed Saturday night, it was like that mouth had never smiled before. Ever. All it knew how to do was cough on me like I was in the first wave of liberators trying to come ashore and it was a germ-spewing machine gun. 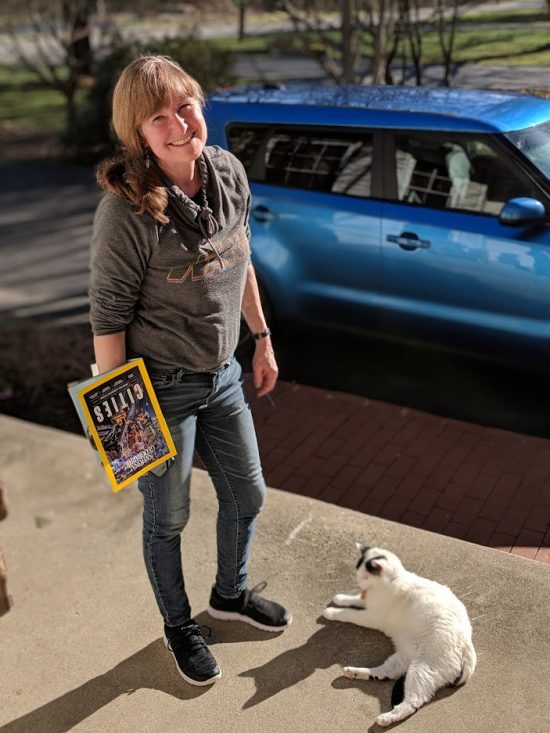 A glimpse at that sweet smile. Taken last year during better times.

To my amazement, I awoke Sunday still feeling okay, but had to make an escape. It’s been a winter of working nights and weekends putting together PowerPoints, articles, and forever trying to get caught up at work. Michele’s mom died after a quick illness in December. My mom has pinged and ponged from home to hospital and now to a rehab center, and I too have been bouncing around between home and a dentist for a fourth try at a new crown and between various doctors trying to figure out why my left ear has been ringing off the hook. This included a horrible outpatient MRI experience, which required that I be totally still in an absolutely claustrophobic situation for what seemed like hours, even, as I’m quite sure, the staff were making fun of my crotch. Fortunately, the MRI didn’t find any of the tumors they were looking for in my noggin, so, yes, they examined my head and found nothing. Just chronic sinus infections. Two rounds of heavy antibiotics later, and my digestive system is so out of whack that I’m willing to promise anyone anything if it means I no longer have to live with myself. And now, Sunday morning, Michele was suffering a great illness, and I was probably going to get it.

The garden beckoned, and I followed the call. 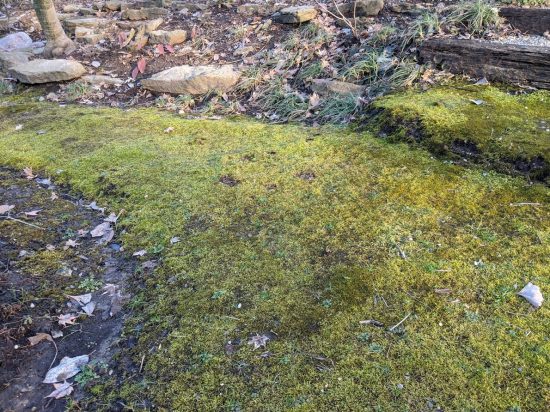 My mossy path brings me joy all through winter. 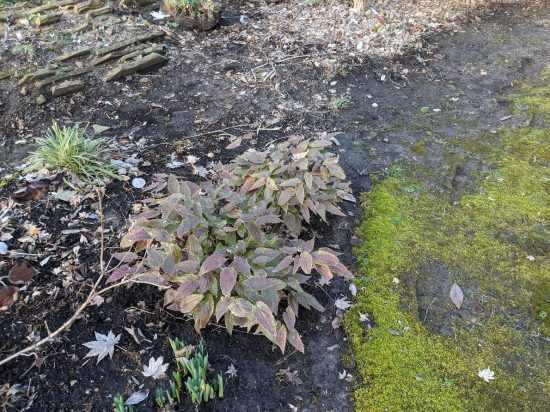 As does Epimedium stellatum’s spectacular winter foliage. (BTW, I could have moved that stick and some of the leaves, but in the interest of journalistic integrity, I left them.

So there I was, gardening again like a lunatic. Finished cutting down a Japanese Raisin Tree that was causing three of my own seed-grown Katsura to grow crooked and also starting to shade out the Arborvitae that are screening my neighbor’s shed. A bit of a bitter pill, because I had also grown the Raisin Tree from seed. In fact, I had germinated this species, planted it out, and lost it over winter three times until a friend I won’t name had under potentially dubious circumstances I won’t describe gotten me seed that was supposedly from a cold hardy provenance from somewhere out there in the world that best remains unmentioned. Well, bingo, this seedling survived every winter, grew like a son of a bitch, started shading out other stuff, and, at best, could be described as boring. It was probably too big for me to take down myself, and I wound up actually proving that when it fell just off target and stripped about half the branches off my Halesia diptera ‘Magniflora.’ This was a favorite tree of mine. Such is the lot of the impulsive gardener with a chainsaw and not a lot of money. 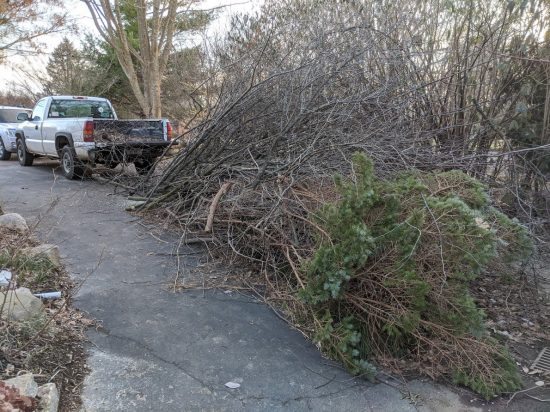 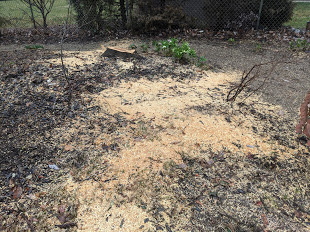 Aftermath of a massacre.

After bucking the Raisin Tree, I patched up the Halesia as best I could. The branching structure was about as squirrelly as they come without any help by me; now I feel I just sculpted it in an empowering way that accentuates even more its true self. Well, anyway, that’s what I’ll tell people.

But as the afternoon progressed, I got to that magical state where my entire existence became about the task at hand. No extraneous thoughts. Just focus. So insanely rare. The ringing in my ear was forgotten. My mother’s care plan, put aside. Michele coughing herself to death somewhere in the house, that thought only strayed into my consciousness, when, on occasion, I would look up to see yellow wisps of coronavirus fog leaking out of small cracks and other holes in the siding of our house. Achieving this state of oblivion, this full immersion in my work, it was like an injection of miracle cure for my heart and soul!

By the time I had finished, I had greatly added to the pile in the driveway, I’d dug up a stump (always an intellectual puzzle and physical feat of strength), and transplanted into that hole a tall, skinny, and surprisingly heavy Chamaecyparis of some species and selection I’ve long forgotten, lugging it clumsily but quickly across the yard like it was an 80 pound, 3’ x 12’ human organ that needed to go immediately into a patient. 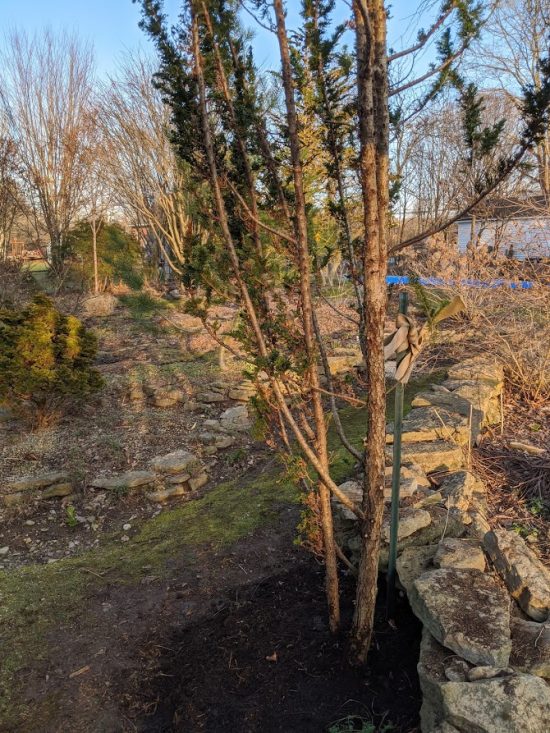 The Chamaecyparis in its new home.

Then I replanted a couple patches of Epimedium and Corydalis which through no fault of their own happened to get “outed” when the stump got grubbed and the Chamaecyparis got dug. Eventually, I even found a little time to admire some blooms of hellebores, snowdrops, Iris reticulata, and a witchhazel. 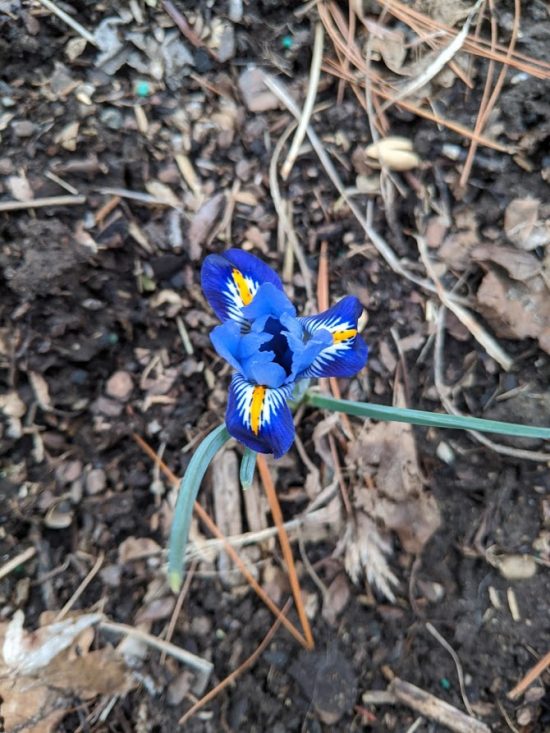 Spring is just waiting to be unleashed! Sure sign of this is Iris reticulata coming into bloom. 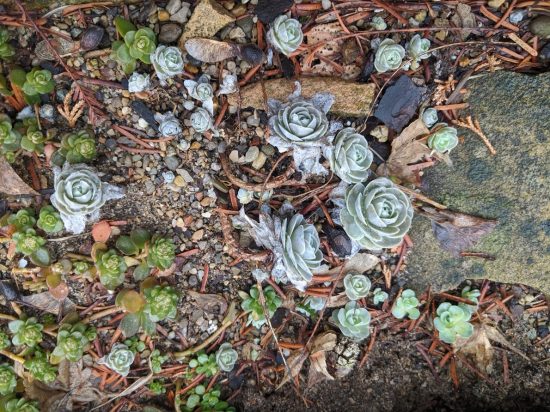 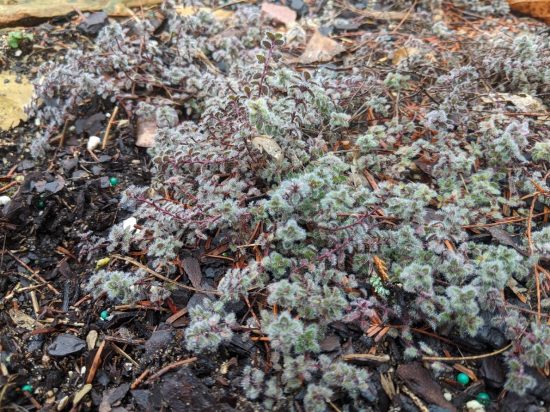 Sedum and a Thyme chomping at the bit.

Monday, Michele’s doctor said she had the flu and by that evening I had a bad cough. Yesterday I got worse and woke up this morning with every nerve ending signaling that every cell in my body was at Defcon Five risk of dying and each of my many coughs felt like a demon carpenter was going at my throat with a rasp. An appointment with my doctor this afternoon put me on two new meds, including a new round of antibiotics. Great.

When I got home, it was almost sunny and relatively warm, so I visited the hellebores, snowdrops, Iris, and witchhazel. Sure, they are in a sea of mud with errant plastic plant tags, fresh stumps, a winter’s worth of dog poop, a pool cover full of dirty water and decaying leaves, a random plastic bucket or two, a rusty pickup, and a mile high pile of brush all trying to photo bomb every picture I take, but, despite this frustration, these early bloomers are a much needed tonic. As much or more so than Tamiflu.

So anyway, thanks for the letter. I’ll pick up on some of your other themes next time. In particular, I want to go after those sourpuss types you mentioned that throw shade on all the new gardeners who are not “pure” enough. But, for now, some chicken soup and bed.