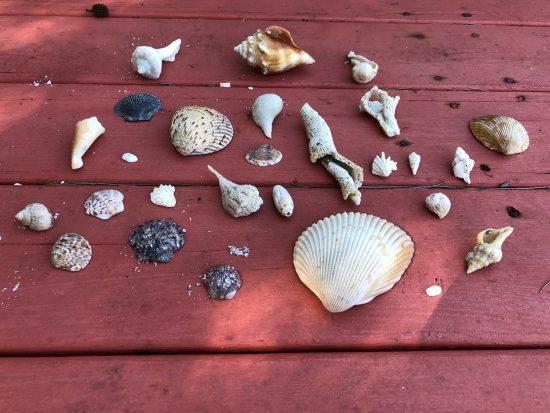 Rose and I left our garden behind last week to go shelling and birding on Sanibel, Captiva and Cayo Costa. We follow a routine, repeated for a week or two every February. We patrol beaches for shells and the J.N. “Ding” Darling National Wildlife Refuge for birds.

We learn the names of an abundant variety of shells and birds and feel confident that our mental acuity may not be as bad as we thought. We feel good about ourselves for a little while.

It is only a mirage.

By the spring equinox, the names of much of what we saw a few weeks before will be forgotten, another robbery of the memory bank.

Rose and I are in our late 60s, not quite over the hill, but poised perilously at the top of a steep one.

The weather has been sunny, and the temperate mostly warm. Rose’s brother Milton joined us, along with Heather Spencer and Charles Murray, our good friends from Asheville, NC, who are great observers of life.

I have never found a four-leaf clover, and when I’m in the company of anyone with sharp eyes, I often ask, “What is it, what did you see?” Charles spotted more cat paw seashells than he’d seen before.  At the Ding Darling, Rose got tipped off on a wood stork; Charles saw a yellow-crowned night heron, and Heather spotted a reddish egret.

I keep good company, and enjoy plenty of sightings, but out alone I would feel helpless, stuck in a metaphorical thicket of impenetrable mangroves without my gifted agents of nature. 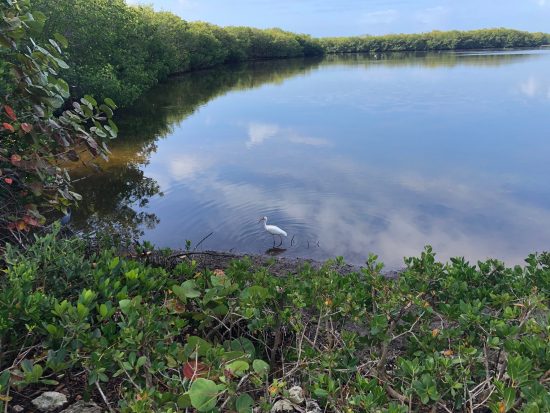 Then there are short-term memory lapses, plagued by random hard-to-recall nouns.

“Pass the thingy,” while pointing a finger toward your targeted object on the kitchen table, may be the best you can do when saltshaker is nowhere close to the tip of your tongue.

I’m not the only one in this floundering boat of nouns.

Poet Laureate Billy Collins riffed on a similar state of mind in his poem, Forgetfulness. Here’s a portion.

The name of the author is the first to go

followed obediently by the title, the plot,

the heartbreaking conclusion, the entire novel

which suddenly becomes one you have never read, never even heard of,

as if, one by one, the memories you used to harbor

decided to retire to the southern hemisphere of the brain,

to a little fishing village where there are no phones.

And, thus, no phone apps.

Heather, Charles and I visited the Corkscrew Sanctuary last Friday. Heather introduced me to a remarkable phone app, Picture This, which identified the vining Aster carolinianus. (At last, I’ve found, if not the Fountain of Youth, at least a phone app that may save me from saying, “Oh, it’s that thingy.”

Heather held the Picture This phone app toward bark, flowers and leaves.

We saw a lot of spongy bald cypress stumps covered in Boston ferns, and rarely was the app stumped. 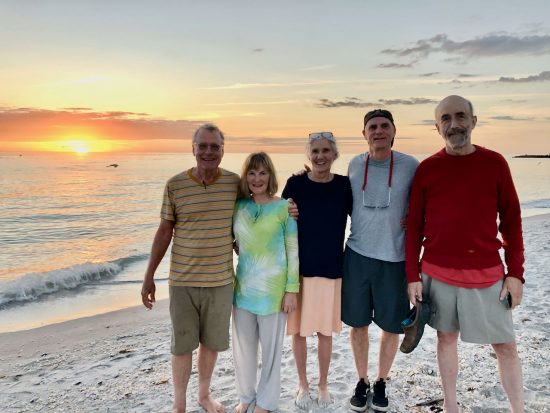 I hadn’t expected to see this oddball aster in a soggy woodland in Southwest Florida, growing with pond cypress (Taxodium ascendens), sabal palms and wax myrtle. (I’ve seen the vine in gardens farther north but never in the wild.) We also learned, through this app, that the Aster is a disaster—well, as far as botanical nomenclature goes. The name has been cruelly mutated to Ampelaster carolininanus. Other asters were re-anointed with clumsy genera names like Doellingeria, Eurybia and Symphyotrichum.

Don’t worry about it.

If you’re in the garden, or in the wild, and Aster carolinianus, climbing aster, or even aster, is all you can remember, it’s all right.

We’ll work through this together.

We’re in the same boat.