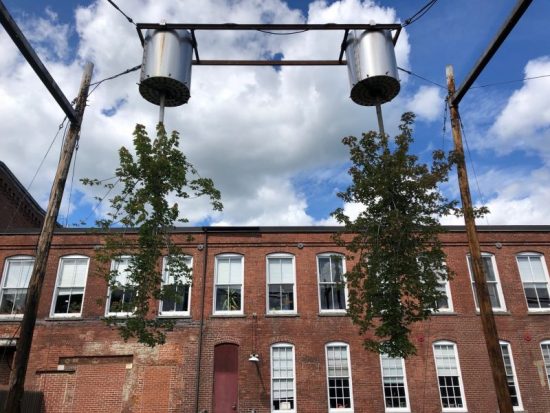 Hayly Fisher is a barista. She waters humble sidewalk plantings outside Bean Roastery and Café in Louisville’s Germantown neighborhood. She planted a few, simple, yellow-orange Cosmos sulphureus outside the store earlier this spring.

Hayly’s flowers are fighting now for elbowroom with crabgrass. Her marigolds are chugging along, though spider mites have speckled the leaves and tried to suck the life out of them. 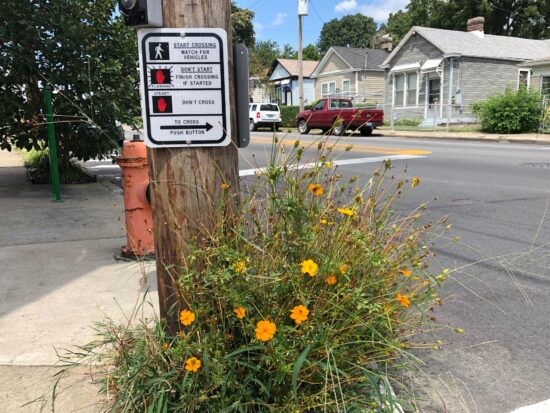 Summers can wear you down in the hot and humid Ohio Valley.

It’s a lush place, but many parts of Louisville need more shade in order to cool off.

I myself have coped with summer heat by rewinding the Loving Spoonful’s Summer in the City over and over in my head.

Back of my neck getting dirty and gritty

Been down isn’t it a pity

Doesn’t seem to be a shadow in the city.

There aren’t many shadows along Goss Avenue, near Bean Roastery and Café.

Louisville in general has a shadow deficit. 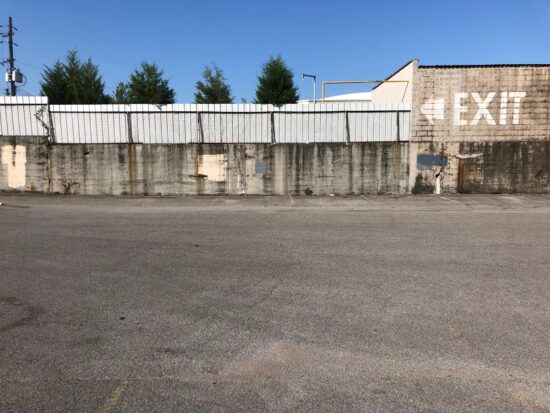 There are neighborhoods full of trees, but there are far too many treeless hot spots. More trees = more shadows and a cooler city. It’s a lot hotter in parts of Louisville, covered in vacant lots, paved asphalt or hundreds of acres of warehouses with heat-absorbing black roofs.

Louisville’s tree canopy deficit has contributed to its shameful distinction as one of the hottest Urban Heat Islands in the country, and we’re climbing the charts faster than any other city in the U.S. It’s five to ten degrees hotter in parts of town with few or no trees. 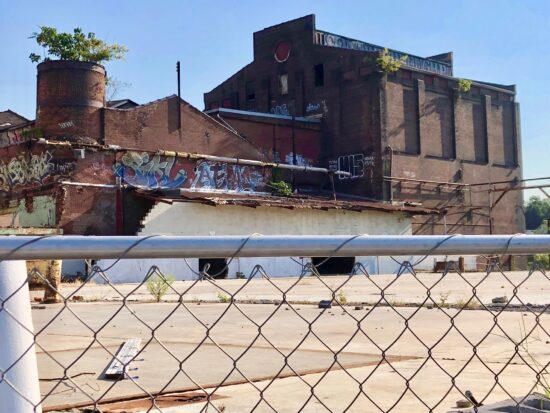 Louisville leaders and the Chamber of Commerce (GLI) would rather you not know the city’s dirt. (NPR reported on Louisville’s trees just last week.) It’s easier to ignore the obvious than admit the city lacks the public and political will to plant, and maintain, lots more trees.

All around, people looking half dead
Walking on the sidewalk, hotter than a match head.

Louisville Metro Parks, Louisville Olmsted Parks Conservancy, TreesLouisville,  Louisville Grows, urban activists and volunteers are planting an estimated, life-affirming 10,000, or more, every year. Let’s face it: they are saps for trees—and proud of it. They deserve respect, but they can’t keep up with tens of thousands of trees lost to diseases, insects, building development and climate change every year.

The mayor should promote vigorous tree planting. The matter has been studied thoroughly. Ignoring Louisville’s tree canopy deficit will not make the problem go away.

Ask not what your city can do for you, ask how many flowers and trees you can plant, and maintain, for the health of your city.

What do we have to do to get a million trees planted in Louisville in the next ten years?

How hard would it be for Mayor Greg Fischer (no relation to Hayly Fisher) to take a lunch break once every few weeks, call the local press and then drive to neighborhoods in every corner of the city?  He could start in neighborhoods near the airport and Central Business District, where it is the hottest, and where there is a dire need for more cooling trees. 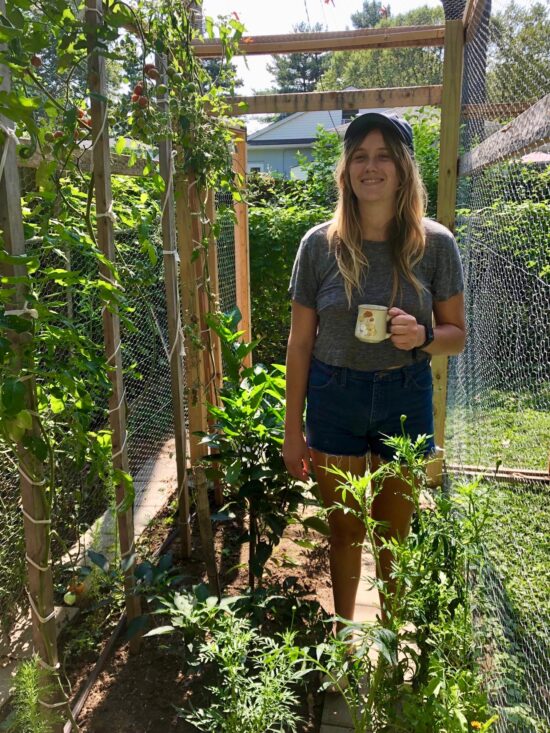 Hayly Fisher in her home garden.

The mayor, once there, could step up on a hay wagon, plug in a microphone and explain why and how his citizens should plant more trees. It would cost the mayor little time and no money.

Mr. Mayor, you’ve been presented terrific tree recommendations, developed in 2015 by your own appointed Louisville Metro Tree Advisory Commission. These include small to medium sized trees, perfect for planting in tight places and under power lines, plus bigger, majestic canopy trees for larger spaces. Don’t be shy about seeking additional campaign talking points. I would argue Louisville has far more talent per capita, with tree know-how, than anywhere else in the country. 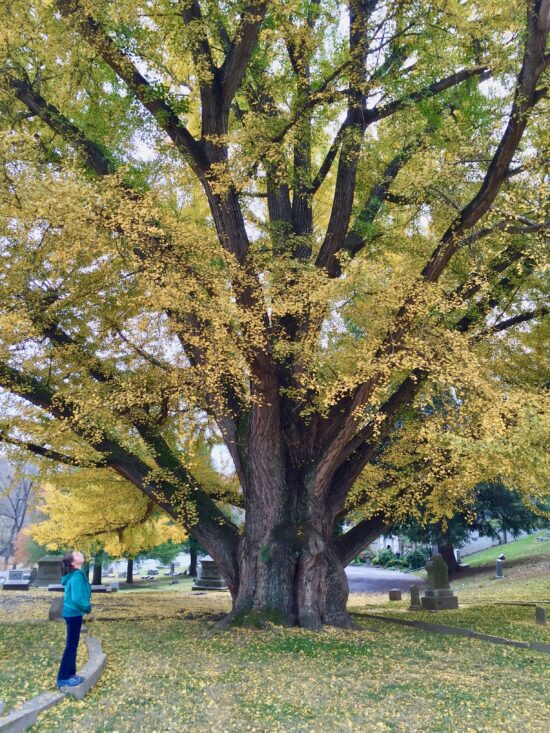 (Or maybe it’s time to stop pretending and admit it’s not worth the effort? An all-out war on climate change may not make much sense, according to Jonathan Franzen in this week’s New Yorker.) 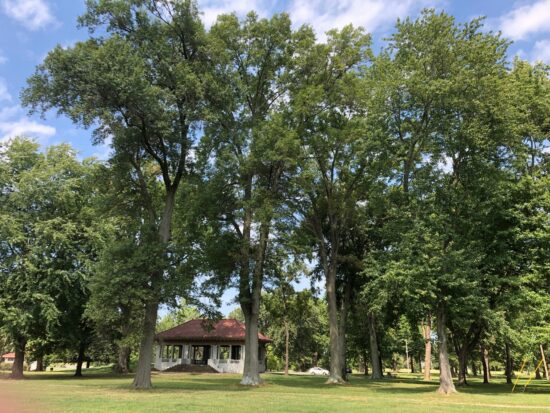 Ireland has a plan to plant 22 million trees a year with a goal of 440 million by 2040; New Zealand has set their sights on a goal of 340 million trees in the next ten years, with a an ultimate goal of a billion new trees.

Cool town, evening in the city
Dressing so fine and looking so pretty
Cool cat, looking for a kitty
Gonna look in every corner of the city
Till I’m wheezing like a bus stop.

It is as easy as it is painful to understand the need for more trees. If Louisville intends to cool down, more tree plantings must become a vital piece of the fix. We need many more trees, but our city is overheated with public and political indifference. The goal should be a loftier one of truly enhancing our tree canopy, instead of losing ground every year. Otherwise, summer sweltering and the public’s health will worsen.

Hayly keeps an eye on her small ball. The mayor’s job is to grab the larger ball. Taking personal action, as Hayly has done—with conscience and intent—requires two virtues in short supply—patience and persistence. Hayly walks the walk—to the sidewalk outside the coffee shop and across Goss Avenue, on the corner of Texas Avenue, to tend a pot of flowers outside of the bar—Pearl of Germantown. 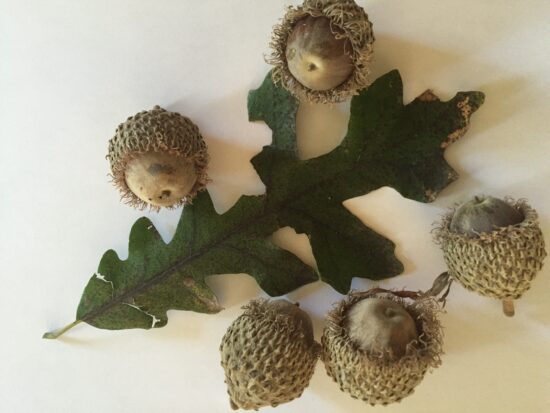 I hope everyone goes out this fall and plants, or donates, a beautiful Gingko, bur oak or sweetbay magnolia.

There’s no way to water this down. Bellowing Hot Town, Summer in the City will be little solace, if you don’t.

Be sure to keep your newly planted trees watered and leave a good tip for your barista!