Planting a Butterfly Meadow from Seed, then Finding Sawdust

I haven’t spent so much per ounce for plant material since I was a miscreant teenager decades ago. 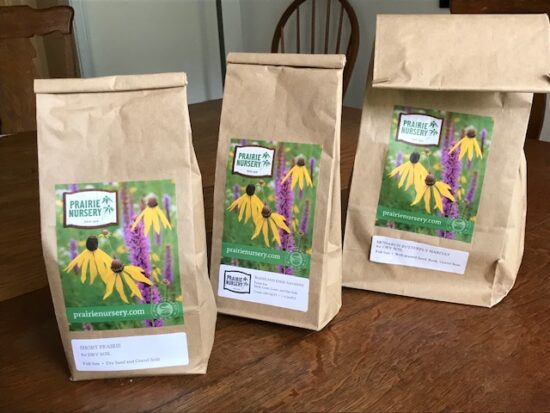 These three bags of seeds from Prairie Nursery in Westfield, Wisconsin, however, promise a longer-lasting high, a Monarch butterfly-friendly meadow that will sweep halfway around my house, transforming my back yard from shabby lawn to, I hope, a flower-filled habitat that should be gorgeous all seasons.  Even during its winter sleep, it should offer the forms and russets of warm-season grasses and wildflowers with a certain austere beauty. 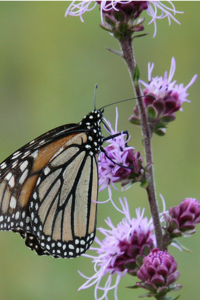 This project has brought its own unique concerns.  One and three quarters pounds of seed may be enough to plant my 5,500 square feet of newly vacated soil, but only if evenly distributed.  However, uniformity of distribution will not only be crucial to success, it will also be challenging given that I intend to sow the seed by hand.   Straight from their bags, I have maybe a dozen handfuls of seed.  I won’t be able to stretch this to cover the entire designated space unless I bulk it up markedly.  In fact, the seed supplier, Prairie Nursery, recommends mixing each quarter lb. of seed with two bushels of some such “carrier”.   That means I need 14 bushels.

I received a number of recommendations about what to mix with the seeds for added bulk.  Vermiculite was the suggestion of a local nursery woman whose opinion I respect and who has planted a number of meadows of her own.  Prairie Nursery recommends either sawdust, sphagnum peat or cracked corn.  I don’t have a local source for cracked corn and anyway, scattering bushels of that around the yard sounds likely to attract unwanted wildlife.  Vermiculite and sphagnum peat both come at a hefty environmental cost, which I’m reluctant to pay.

That leaves sawdust, which I naively thought would be easily available and, I assumed, would be free.

Finding a source of sawdust, however, proved not so easy.  Apparently, it is no longer a waste product but rather a recycled resource.  I called a local sawmill and was informed that it sold all the sawdust it produces to a farmer.  A stop at a small roadside milling operation with a beautiful pile of sawdust brought the same answer.  Apparently, sawdust makes good bedding for chickens, horses, and cattle and once mixed with their manures is an excellent source of organic matter for crop soils.  Indeed, the Forest Service publishes a handbook on uses for sawdust, which makes it clear that this stuff is a valuable as well as versatile commodity.  Who knew? 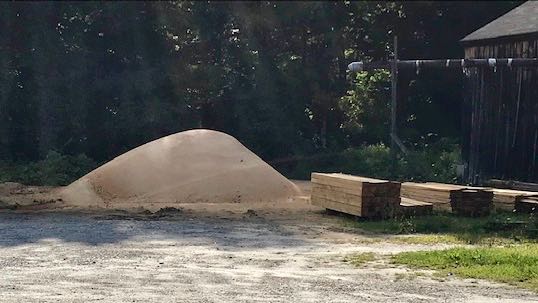 Fortunately, I have a friend, the highly skilled craftsman who built the timber frame for my house, who will let me have some of his sawdust.  So on Wednesday I’ll be driving up to his workshop in northern Massachusetts where he has promised to fill the back of my truck with his front end loader.  I feel rich already.