Right Plant, Right Place in my Garden of Low Expectations – the Junque Garden 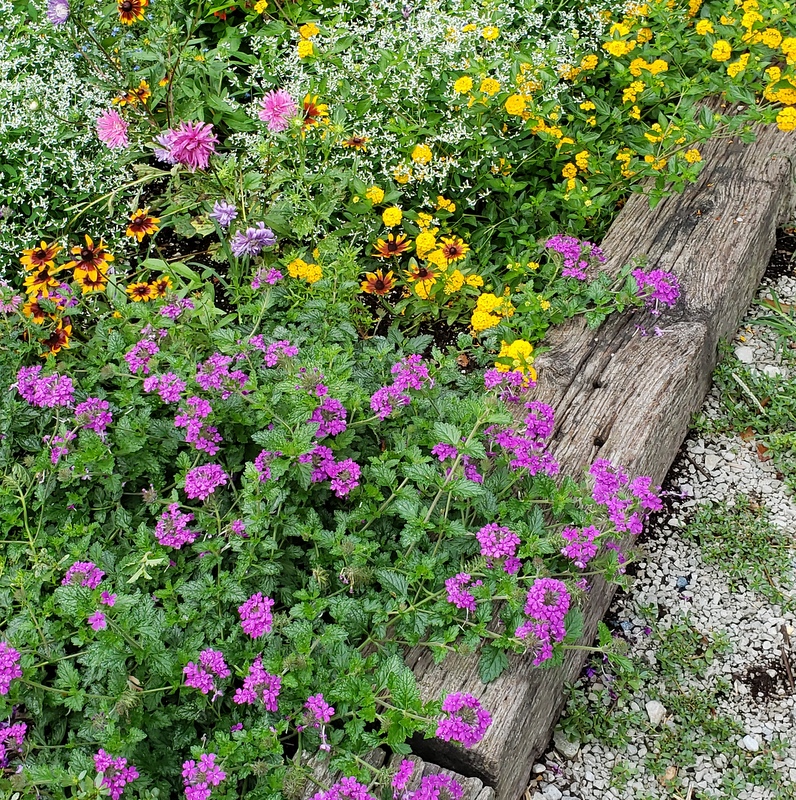 The flowers – annuals and perennials and a few that hadn’t yet made up their minds which way to go – were stuck in a far corner of our greenhouse, abandoned to their fate.

The mix included verbena, lantana, salvia, the euphorbia ‘Diamond Frost’ and a few others whose names escape me. One of the problems with being considered a garden expert is you know in your heart you really don’t know that much.

Some of those flowers been grown from seed, about 25 cultivars we had carefully selected from catalogs in January, planted in a heated greenhouse in March and babied until planting times. Those came with the most emotional attachment.

Other flowers – all perennials – came from plugs. We had ordered a few hard-to-find cultivars which came, of course, with a minimum of 20 to 30 each, way the hell more than wanted or needed. My attachment to them was more financial.

The ‘Diamond Frost’ – a perfect name for that white-speckled, frail-looking number – came from a nursery or box store; the mind wanders at the scale of keeping up with all my plants. ‘Diamond Frost’ has long been a favorite of my wife. I could apparently take it but mostly left it.

At any rate, when the spring planting was done a few of each ended up in that far corner of the greenhouse. In most cases they were the runts of the litter, locked away in too-small containers, root-bound, water-needy, sad-looking and in need of Osmocote and more love then I had time to give. 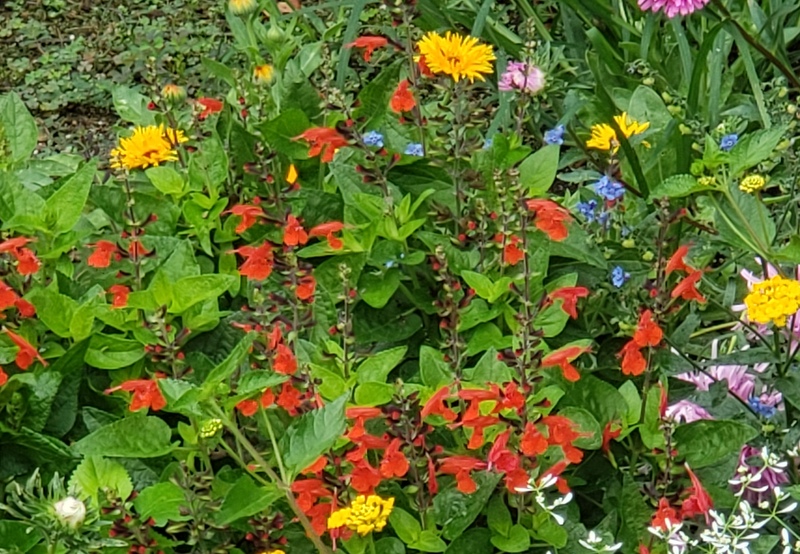 I was seriously considering just chucking those puny outliers into the compost pile lest some true gardener wander by and wonder what those orphans were doing there.

But I couldn’t bring myself to do it. I had some time, money, material and pride tied up in those plants. Looking at it from their perspective, they were still hanging on. They deserved a chance to live, to at least get out of those containers and into the ground.

The immediate problem was all my regular garden areas were taken by annuals and perennials doing pretty darn well. I didn’t want to crowd them. So I found a place for those Most Needy in perhaps the worst possible place – an area that had once been the home of container shrubs when I was in the nursery business.

As such, the site had been alternately covered in gravel, small rock, compost and mulch. It received about four hours of brutal afternoon sun. It was also bordered by old, decomposing railroad ties. Perfect.

I know what you’re thinking: Those plants would have been happier in the compost pile. The good news – sort of – was that the new site was also in a high-traffic area. Those plants, if they considered living, could be witnessed and adored by all.

Best I remember I took those plants over by the new site and let them sit there for a few more days, generally forgotten. Once in a while I would water the pack, but mostly left them alone to contemplate their fate.

Come planting day I was very surprised to see just how rocky that soil was. I could barely dig in three or four inches, considered using my tree spade, but stayed with the sharp trowel. 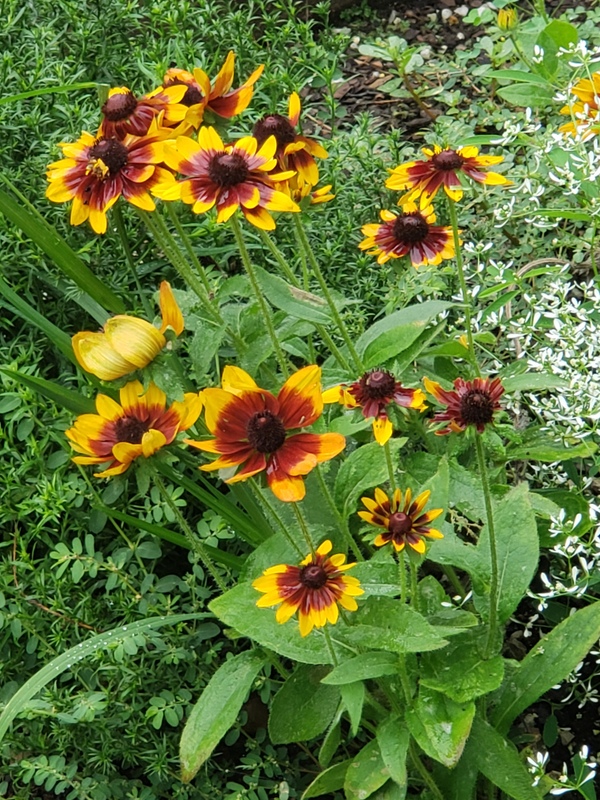 In about 45 minutes I had all of them in the alleged ground and covered with what could be considered fine gravel. Not a real good gardening site, I was thinking, but drainage shouldn’t be a problem.

I did water the site fairly regularly – as did others. There was some guilt involved in this whole process. I also tossed down a fine layer of Osmocote; hope does spring eternal. I also decided to name this site my “Junque Garden” – a guy can’t be too optimistic.

I was giving the garden a week, maybe two, to brown up and frizzle in that late afternoon sun. It refused to comply. The bright yellow lantana did well, of course. Once established it will grow in center-lane asphalt. The purple verbena was no big surprise either. It likes some sun and good drainage. The same with red salvia.

But wait a minute. In a few weeks my Junque Garden had a bit of the pastel look of Monet’s Giverny. It flowed in green with bursts of pink, purple and yellow from those other flowers whose names escaped me.

The garden was bold and stunning and peaceful right there in screaming afternoon sun and bordered by decaying railroad ties. It was the most beautiful and mesmerizing garden on our place – Railroad Tie Section. Only a genius could have designed this. 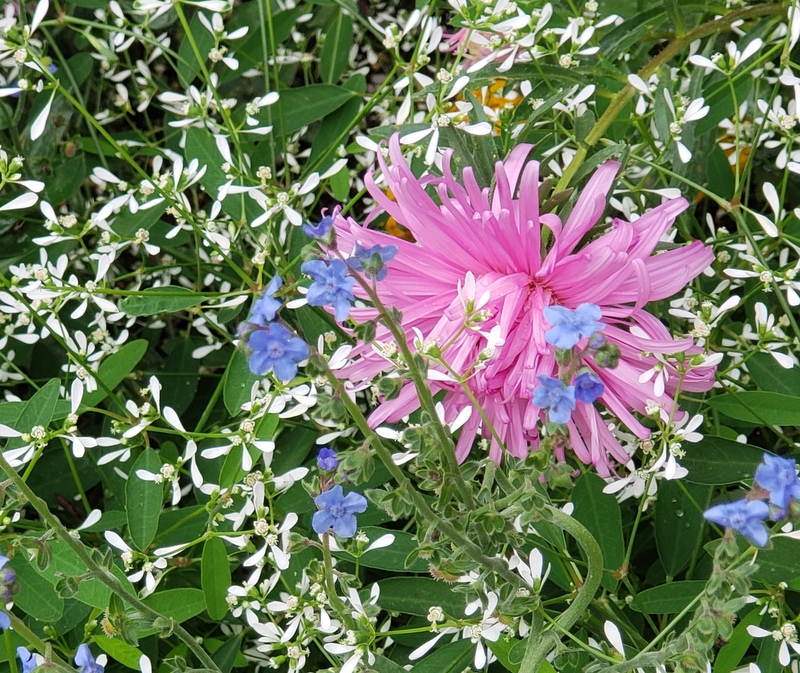 And the ‘Diamond Frost’! My God that frail-looking beauty owned the garden. It is thriving in rocky soil in late afternoon sun. No longer will it be relegated to containers and wedding and funeral bouquets.

In fact, the always modest, low-key Proven Winters website gave ‘Diamond Frost’ a chance to speak her own mind:

I want to thank my parents, my breeder and especially the millions of fans who have made me the Most Award-Winning Plant in Proven Winners History.

At my 2005 debut I was just a new 12 to 18 inch Proven WinNERS Euphorbia…you later praised my mounded habit and how well I tolerate heat and drought…If I could, I would keep you with me in full sun to part shade forever…”

Or at least in what will be my expanded 2020 Junque Garden.