DC is Tops in Green Roofs! Some Actual Good News

Did you know that Washington, D.C., with 1.2 million square feet of green roofs as of 2014, won bragging rights as the greenest U.S. city? No, really. (Source: EcoWatch.)

If you’re still doubting, a new report from the nonprofit Green Roofs for Healthy Cities gives DC its highest ranking for green roofs, for the fourth time. Their press release credited DC’s great policies and programs, including rebates of $7-$15 per square foot per green roof installed and credits that reduce stormwater fees. But let’s be honest – it also benefits from all the new federal buildings going up in the city, all of which are covered with green roofs, as far as I can tell. 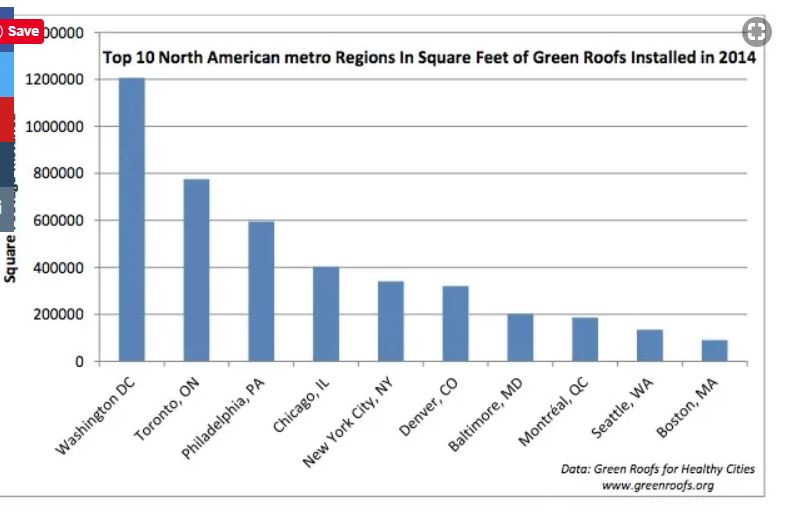 I’ve seen a few around town but in May of this year, I was part of a GardenComm group that visited a 17,000-square-foot roof-top farm above a new mixed-use development in Bethesda, Maryland called Pike and Rose. The manager told us that all their buildings have green roofs, which earned the whole neighborhood a Gold LEED rating. 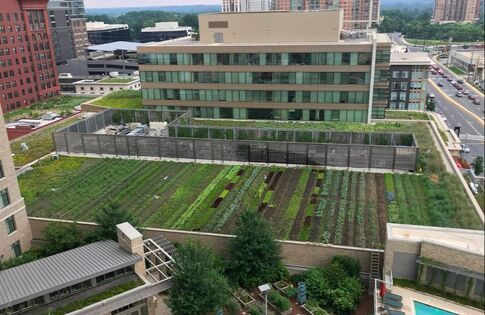 So this is a positive story (couldn’t we all use one?) that demonstrates some of the additional benefits of managing stormwater well – like feeding people, and giving young gardeners a job. 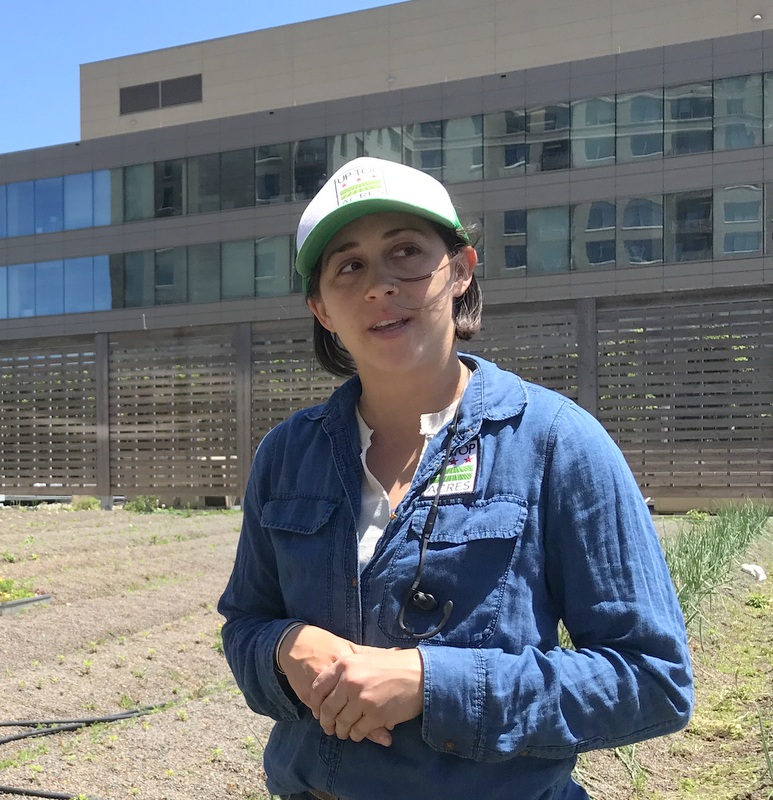 Young gardeners like Farmer Sara here, who works for the very cool company Uptop Acres, which is contracted to take care of this and 23 other roof-top farms in the DC area. She’s the Farm Manager at this location.

(The entrepreneurs at UpTop were inspired by a similar company in New York – Brooklyn Grange.)

Sara told us that the 1/3-acre farm is composed of 42 beds and that the CSA distributing their harvest had 40 customers last year, and wholesale customers, too.

So what’s Sara learned from roof-top farming? Carrots, onions, eggplant, strawberries and okra do very well in what’s essentially a Mediterranean climate up there. Hoop houses have worked well for them. Staking up tomatoes, not so much.

The worst pests she has to deal with? Not deer or rabbits, we know, but invaders from the sky – the damn geese and crows!

As described in this video, Uptop Acre’s partner in all this is the University of Maryland, which is working with them to develop soils and other best practices for growing food on roofs.
By Susan Harris|2021-01-23T11:07:22-05:00August 6, 2019|Comments Off on DC is Tops in Green Roofs! Some Actual Good News