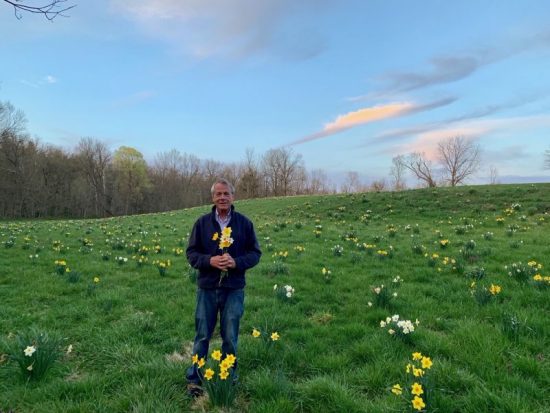 Rose and I had an idea for a family homecoming last month. We hosted our kids for a week on the spring train to Serendipity.

Our son lives with his wife in London; our daughter and granddaughter live in Bellingham, WA. The plan worked. It was great to have the kids home.

Our children have always enjoyed the outdoors—in backyards, parks, gardens and the wild. Molly and Cooper, when they were young, even made a little walk-around money, collecting black-eyed Susan seeds for Jelitto Perennial Seeds, my old employer. 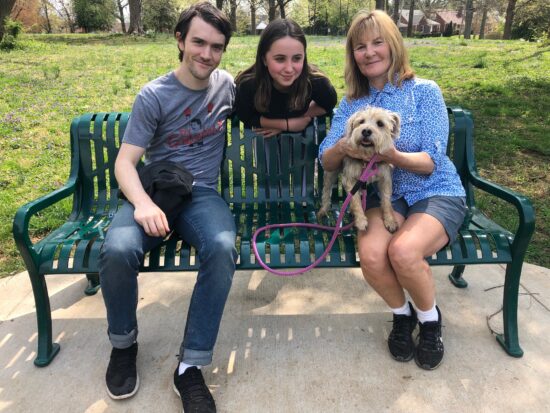 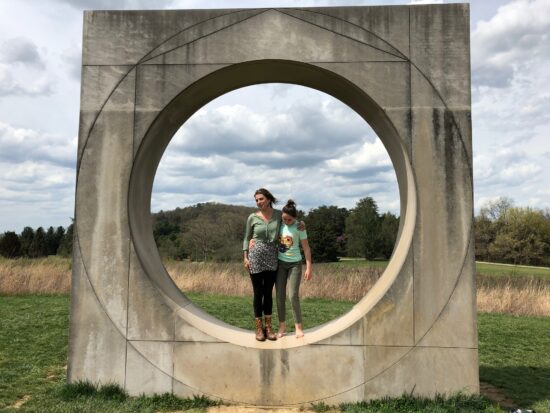 Molly and Story at Bernheim Forest and Research Arboretum in Clermont, KY.

Our granddaughter, Story, has devoured nature’s surprises from a very young age. She’s 12 now and shows no signs of letting up. This past January, for instance, Story took a New Year’s Day polar plunge into Bellingham’s chilly Lake Padden. While visiting us, she jumped into Salvisa’s Salt River with her friend Sofia. The river’s temperature was a chilly 55F. Story is a Pisces water bug. 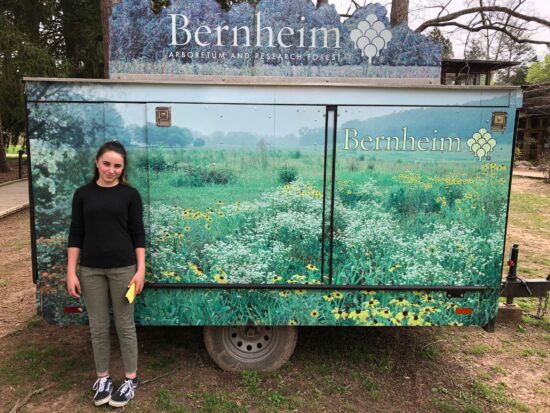 I myself am astrologically challenged. I prefer a warm threshold above 70F before I dip my toes in the water.

I don’t want to think about summer’s heat and oppressive humidity just as Kentucky begins to shed dormancy, when skies are blue and temperatures are mild. I outlasted winter by hoping with every fiber to be reborn in April. I succeeded. Sometimes spring blooms and lucky stars are waiting at the station. You don’t want to miss Serendipity. Summer can wait.

Seven years ago, we began binge-planting 500 daffodil bulbs in a two-and-a-half-acre field, adjacent to the Salt River. We kept up the fall ritual for five years.  Peak daffodil bloom was a week late this year, but it was serendipitously perfect. It was time for a party. 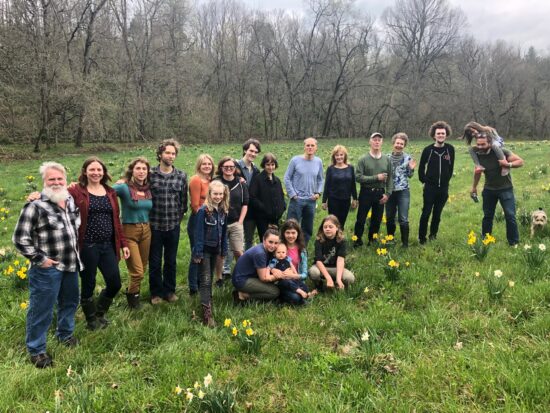 The chartreuse maple catkins arrived at the Serendipity platform in early April. If your eyes were peeled, you could see 100-foot trees in the distance, beginning to light up woodlands. Before a week went by, the redbud blooms splashed roadsides, followed lickety-split by white-flowering dogwoods. Spring beauties gave way to carpets of mayapples, woodland phlox and larkspur. 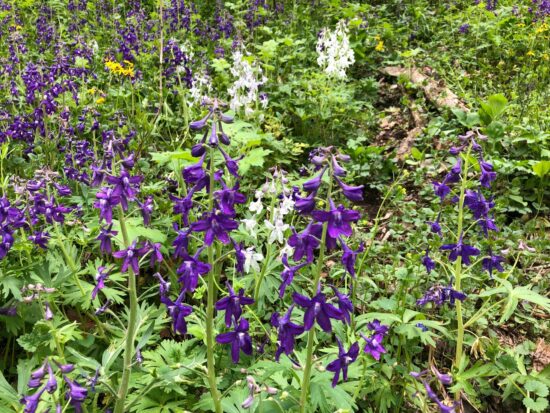 Cooper, Kylie, Molly and Story returned to their respective homes to catch a glimpse of what spring had to offer in London and Bellingham. I’m waiting for field reports on what their daffodils looked like, but Salvisa’s never looked better.

There was no stopping springtime in Kentucky. Everyone I’ve asked around here agreed with the assessment of April’s abundance. I haven’t met a naysayer yet, though I remember when old timers used to preach the flipside of too much of a good thing. “We’re going to pay for it,” they would say. Heaven help us. Surely, we can hold onto this surprising spring goodness for a few more weeks.

When the daffodils finished blooming in the bottomland, they were followed by beaked corn salad, Valerianella radiata, that popped up voluntarily and keeps spreading magnificently in the wet bottomland it prefers. A record rainfall helped last year. The leaves of this native annual have a delicious lettuce-like flavor. We mow the field a month after the beaked corn salad is finished blooming in order to allow the seed to ripen and the daffodil foliage to go dormant. 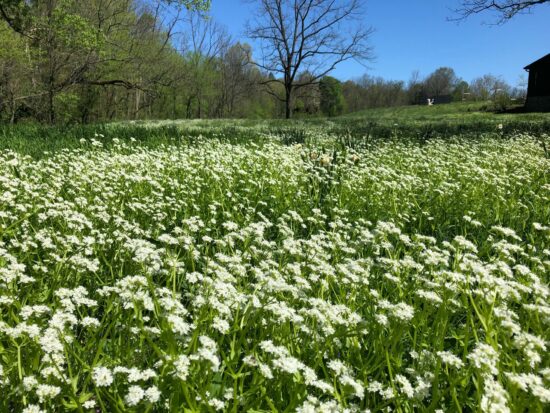 The “spicily perfumed,” white-flowering witch alder, Fothergilla major, was planted intentionally in our garden 20 years ago. The golden ragwort, Senecio aureus, muscled its way in ten years ago. The unassuming yellow daisy made itself at home along a built dry creek bed designed and built by Bruce Carnahan for storm water drainage. I couldn’t have dreamed up the plant combination but I was happy with the surprise. The golden ragwort is a great, native groundcover, even though some might argue that it is a weedy thug. 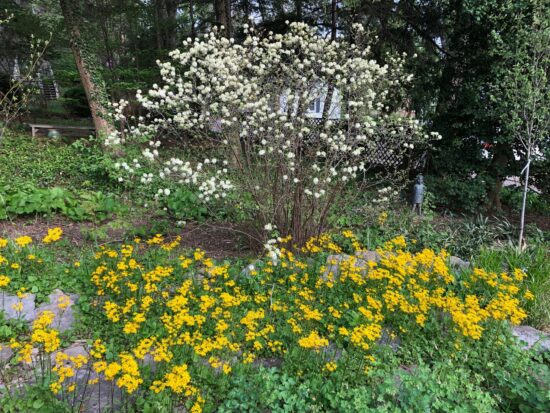 I play it safe to avoid a runaway train—the possibility of thousands of seeds blowing away in every direction. I cut most of the blooms as soon as soon they’re finished. I don’t mind a few odd seedlings popping up. I am happy to have Fothergilla and a ribbon of flowering Senecio aureus parked at the railway station.

The dainty blooms of leatherwood (Dirca) and spicebush (Lindera) faded just as two sassafras trees began blooming for the first time. I started the sassafras from seeds given to me years ago by Bruce Eveslage. He collected them from his place across the Ohio River in Floyds Knobs, Indiana. One tree is male; the other female—essential for seed set. I can already imagine a crop of dark blue seeds, hanging from bright red stems. 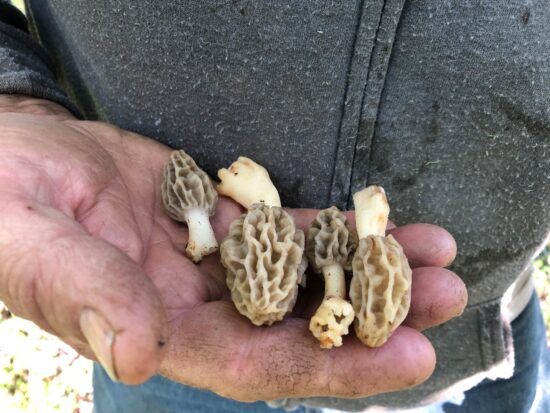 Noble Boswell took me into the woods, across the river for a late afternoon hunt for morels. Noble, a gifted woodsman with a sharp eye, said morels (he calls them dry land fish) could be found when the oak leaves are the size of a squirrel’s ear. Noble’s a pro. He found a dozen or so morels.

My sister Nancy was visiting with her friend Meg. I cut my one morel into four pieces and cooked them on the stovetop in olive oil with salt and pepper. “That’s it?” they asked, pointing the finger at their miniscule portions. Rose joined the laughter but they agreed: the miniscule mushroom slivers were tasty.

What a wonderful April.

May we all be blessed with sun-drenched dreams of an eternal train ride of spring blooms, sprinkled with a few extra morels.