Geographically speaking, my always stunning crop of Virginia Bluebells got to Indiana from a plant nursery in West Virginia. But as is often the case in the plant world, geography, history and personal preference get a little tangled in the journey.

Yes, the Virginia Bluebells name came from their 17th century discovery in the Colony of Virginia, but they are actually native from New York to Alabama and west to Kansas and Minnesota – and showing up in 18 species along the way. 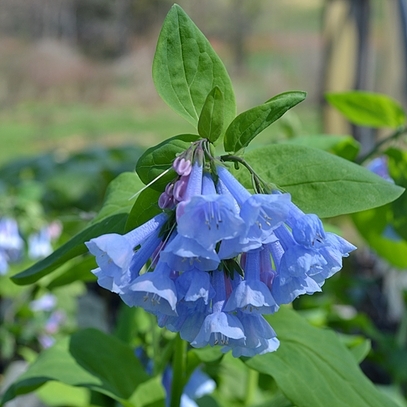 If it’s a more specific date you require, American Father Figure and Garden Guy Thomas Jefferson wrote of the Monticello bluebells in his garden book on April 16,1766, reporting “a bluish colored, funnel-formed flower in the lowlands in bloom.”

That a man with such a gift for words would so understate the beauty of my favorite native plant is almost criminal. Come on Tom! Where’s the passion in “bluish colored and funnel-formed?”

I, for one, desperately long for my Virginia bluebells arrival every spring, stomping around in the fat brown layer of dead magnolia leaves that fell on my patch looking for some truth. 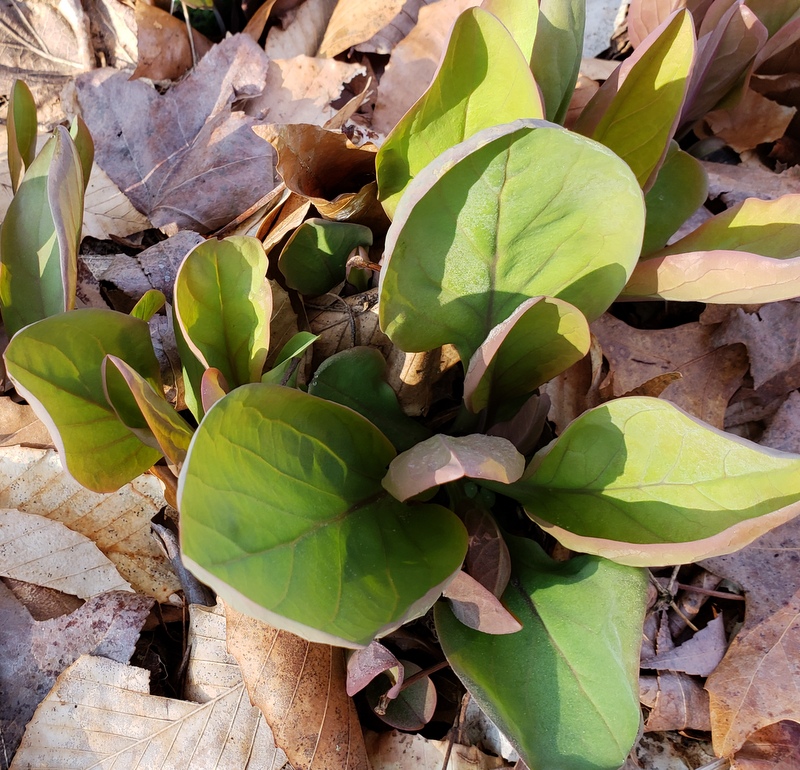 It’s March Magic. Winter is history. Their leaves first poke through the leaf decay in dark shades of purple but turn a pleasant green as they mature. The “funnel-formed flowers,” and I will give Thomas Jefferson his due on that, flow from a rich pink to their heavenly shade of baby blue, although that can vary according to the soil from whence they emerge.

That color change is the result of changes in the pH of the cell sap, although, like hydrangeas, Virginia Bluebells grown in acid soils will turn a deeper shade of blue and rise maybe 14 inches above a bleak, love-starved, late-winter landscape. 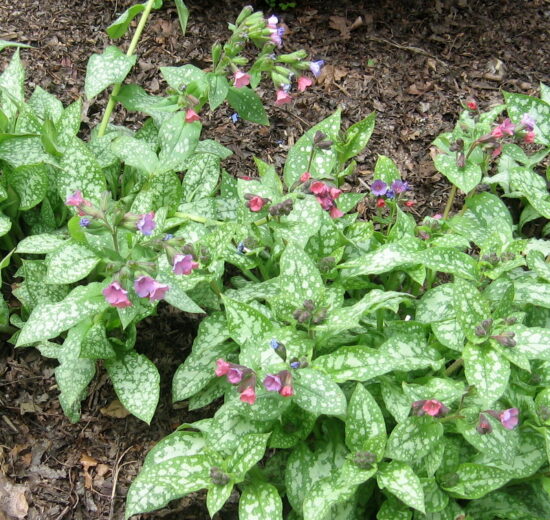 Moving deeper into the plant history, such flower color change is fairly common in the bluebell-borage family. And early garden experts confused bluebells with pulmonaria, which offers the same flow of pink and blue. 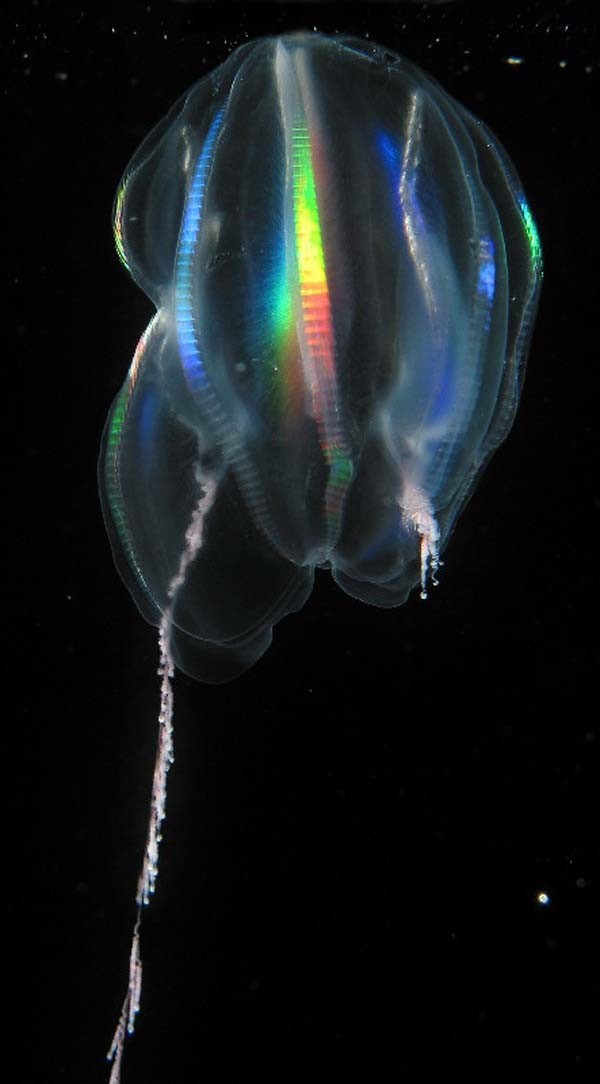 Here’s another fact that can win you some smiles at the next garden club meeting. Merten’s son, K. H. Mertens, had a group of jellyfish named mertensia in his honor, a rare double-play in the plant and underwater worlds.

Such plant-name designations have always seemed arbitrary to me – and I want in. I live – or perhaps may have to die for – the day any spring-blooming ephemeral with sexy green leaves and pink-blue flowers is named Hilltensia hoosierca.

Given its colors, early pioneers to the New World also thought Virginia bluebells to be lungwort, which had been used to treat lung diseases on the far side of the ocean. It didn’t work over here. Dead men tell no tales.

Another early blue name was “oyster leaf,” but was apparently not a hit item in the Colonial diet. Another title was “Mountain blue cowslip,” about as descriptive as Jefferson’s “funnel-formed” flowers.

How do I love thee, Virginia bluebell? Let me count the ways. 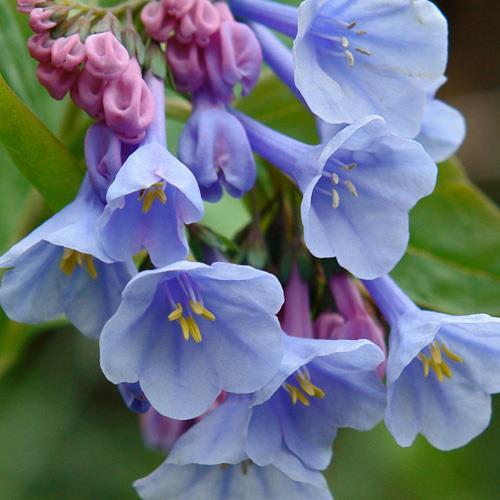 2. The leaves and flowers buddy up well on the early spring calendar with Bloodroot, crocus and Celandine poppies, offering a woodsy palette of pink, blue, purple, yellow, white and green.

3. Their leaves show up about the same time as the NCAA basketball tournament, so if your beloved team loses you have a good excuse to go outside to the garden and shed tears where no one can see you. 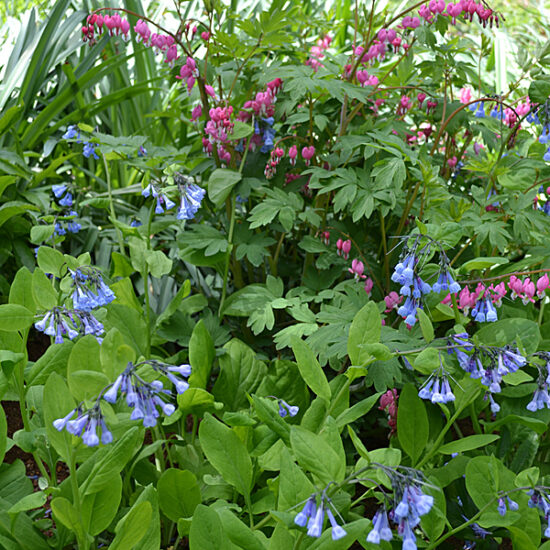 4. Given their “funnel-formed” flowers – and OK, maybe Thomas Jefferson was on to something – their pollinators are a flying circus of honeybees, bumblebees, Anthophoid bees, mason bees, Halictid bees, Syrphid flies, butterflies and Sphinx moths. Yes, good people get paid to research all that stuff.

5. Those same people also report Ruby-Throated Hummingbirds will also occasionally stick their noses into “funnel-formed” Virginia bluebells, an event for which I would gladly pay $10 to sit and watch on a sunny Spring day in April and May.

6. Leaving little mess behind, Virginia bluebells go away by early summer, dropping exactly four seeds (the experts call them “nutlets”) per flower to propagate the species. These small nutlets – politically speaking and otherwise – are ovoid and flattened on one side, their surfaces minutely wrinkled.

7. Virginia bluebells can be purchased as nutlets or in bare root divisions. My naked roots came from Sunshine Farm and Gardens in West Virginia where Forever Hippie Barry Glick has held forth in very remote splendor for more than 40 years.

8. Virginia bluebells are not forever. They can die out in four or five years to be replaced by their own nutlets, store-bought nutlets or root divisions, but no matter their entry, they always leave us better for the experience.