Florida’s Corkscrew Swamp, Now Bird Sanctuary, with Thanks to Feather-Rufflers 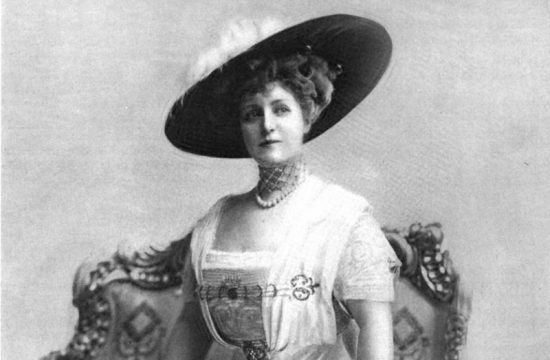 Feathers might not have been ruffled if actress Lillian Russell, and other early 20thcentury fashonistas, had not sashayed around in hats with colorful plumes, plucked from wading birds. And, if there had not been a fight to save the birds, there might not be a Corkscrew Swamp Sanctuary in southwest Florida today.

The feathers of Florida wading birds at that time fetched as much as $30 an ounce, twice the value of gold. The Florida legislature was pressured to ban the hunting of wading birds. That was insufficient, so activists held a fundraiser to hire wardens, three of whom were killed in the line of duty. Other wardens disappeared. Nobody knows what happened to them. Peer group pressure proved more effective, and safer, in the fight against plumed couture. 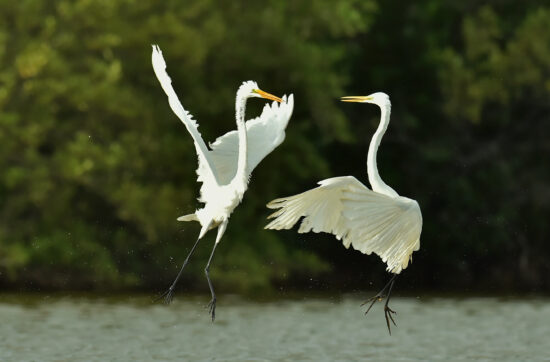 Here’s a link to an NPR story about women who saved birds:

Today loss of shallow wetland habitat is the primary threat. An estimated 100,00 wading birds now live in Florida. In the early hours they forage for food in the swamp and the shallow wetlands, and then the birds return to the swamp to roost late in the day.

To reach the Audubon’s Corkscrew Swamp Sanctuary, on the northeast fringe of Naples Florida, you drive past cookie-cutter suburban developments with clipped hedges and man-made lakes with their gushing fountains. (The Corkscrew River got its name because of its twists and turns, but Florida developers didn’t think it sounded romantic, so changed it to the Imperial River.) 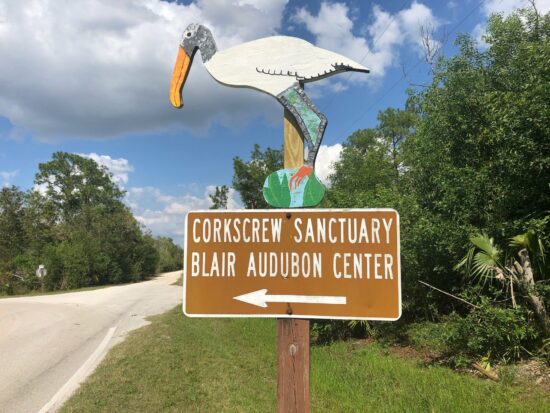 This was once part of a natural landscape of bald cypresses that spread over 50,000 acres. Bald cypresses were extensively cut for saw timber during World War II. The logging expanded during the post-war U.S Marshall Plan. Rot-resistant cypress timber was shipped to Europe. Business was good.

Beginning in 1954, 2,880 acres, including 768 acres of old-growth cypresses, were deeded from two local lumber companies to the National Audubon Society. Nearly 14,000 acres of the Corkscrew Swamp Sanctuary is protected today. There are 500-year-old-growth bald cypresses that reach over 100’ tall. The largest bald cypress has a circumference of 28’. 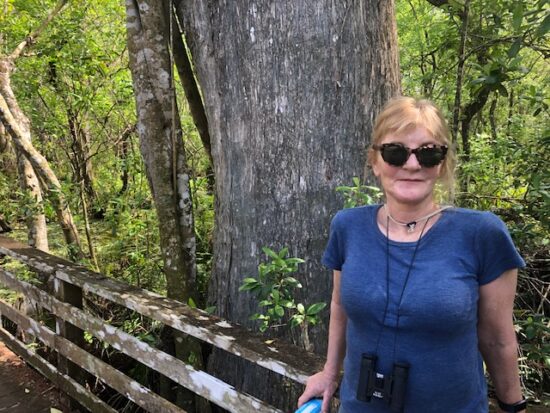 Keith Johnson guided our morning tour a few weeks ago. The former energy executive from Columbus, Ohio, has been guiding groups for ten years. Keith has absorbed a staggering amount of the sanctuary’s natural history.  I needed his tour more than I had imagined. My senses had been deadened by months of Kentucky’s winter of cold and rain.

At the outset of our tour, my state of mind made me recall a Mark Twain quote: “You can’t depend on your eyes when your imagination is out of focus.” When I first arrived, I could barely see the swamp for the bald cypresses. A dose of Florida wilderness slowly brought me back around.

Keith Johnson loves the Corkscrew Swamp. His tour was more informative than a “pun-lobbing, pistol-wielding” Skipper on a Disney World Jungle Cruise. Keith’s walk, along a winding, elevated walkway, followed a tiny portion of the sheet flow of seasonal water that begins in Lake Trafford, before it reaches the Corkscrew Sanctuary and descends indecipherably downhill into pine flatwoods of slash pines and sabal palms, dotted with yellow-flowering tickseed Coreopsis leavenworthii. The water proceeds through wet prairies of sand cordgrass and buttonbush until it reaches swamps filled with massive bald cypresses, air plants, Spanish moss and Florida strangler figs. 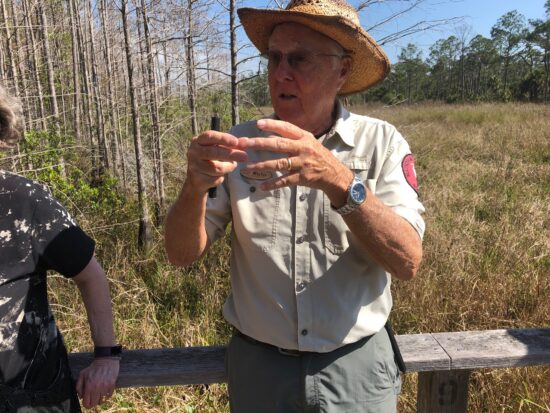 There was so much I didn’t know about the bald cypress.

Bald cypress (Taxodium distichum)is a predominantly Eastern North American species of the coastal plains from Cape May, New Jersey, to East Texas. But the monoecious tree (the male flowers occur higher in the tree and rain down pollen on the females for fertilization) also grows in wetlands, north to Kentucky and southern Illinois. Bald cypresses, for landscapes, are very versatile conifers capable of growing in sun or partial shade, in wetlands or dry soils that are either acidic or alkaline. I have seen trees growing in the Miami tropics, and they are cold hardy (Zone 4) to Toronto. According to Mike Dirr’s Encyclopedia of Trees and Shrubs, “The rich, green foliage appears on feather-like branches and turns rusty orange to brown in autumn.” 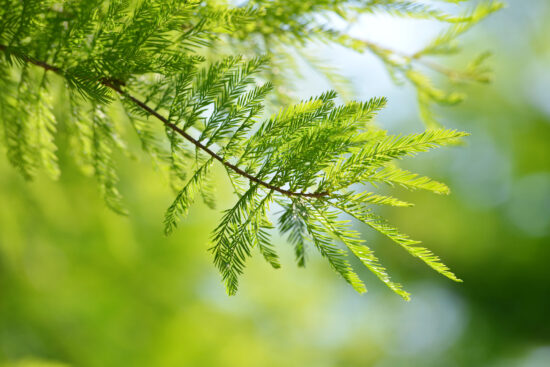 I had previously thought the knobby “knees,” that grow around the periphery of bald cypresses, allowed the trees to breathe. But the knees play no role in oxygenation. Keith explained that these buttressed trees, together with the knees and roots of nearby trees, when woven among one another, support the trees from hurricane-strength winds. Though treetops can be blown out, few trees are toppled in hurricanes. 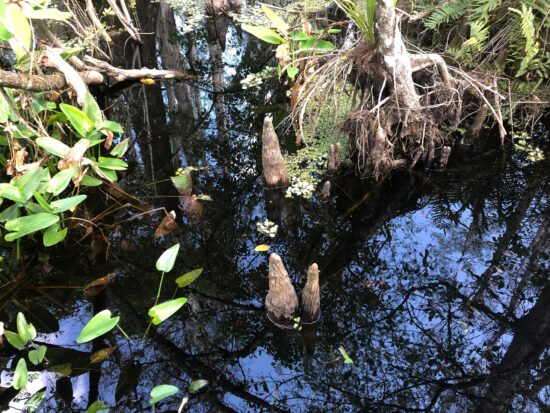 Knobby knees in the Corkscrew Swamp.

Toward the end of the tour, we saw what I thought was a big alligator sunning herself on a dry hummock. She was eight feet long. Not so big, we were told. Keith said the world-record alligator sighting was 19 feet long. This scared the wits out of us.

The tour group soon dispersed. Rose and I followed our tour guide. I wanted to learn more; Keith was ready for lunch. He told us how an Anhinga can fly into the swamp’s water, dip just below the surface and pierce fish with its “stiletto” bill.

A pig frog grunted near a clump of inland leather ferns with ten-foot-long fronds. Keith pointed to a dahoon holly and two birds—an American limpkin and a bittern—and then we said goodbye. We’d only walked one-half mile in two and a half hours.

This unique, remnant ecosystem, once so threatened, and now so carefully loved and preserved, might not exist if activists had not stood up for conservation and fought popular fashion. 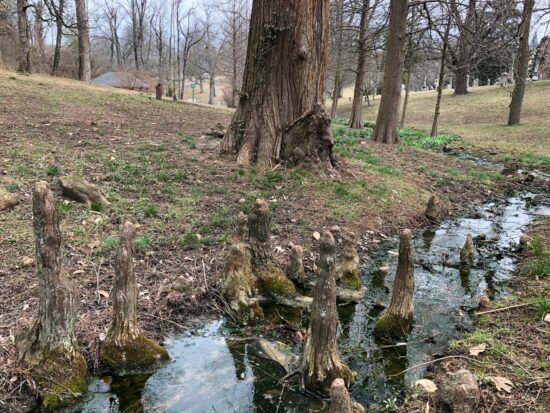 Over the past few weeks, since our visit, I can’t stop thinking about the Corkscrew Swamp Sanctuary. Inside it, Keith Johnson helped me set aside thoughts of the outside world for a few hours.

I realize, now, how lucky I have been for blessings I have found—outdoors—in public parks, gardens and natural areas. These random epiphanies pass in the blink of an eye but always stay with me.

I will remember Keith’s tour whenever I see a bald cypress.