What science tells us about feeding hummingbirds 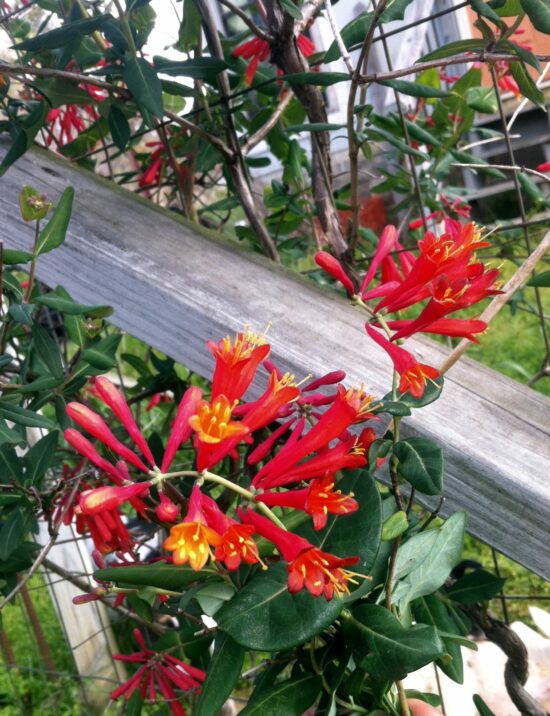 As I write this at the end of March, millions of faces are peering out their windows at freshly filled hummingbird feeders. Friends south of them have reported their first sightings of the season, and goodness, what kind of human being would want to disappoint an early hummingbird?

I remember an April morning several years ago when a freak late season snowstorm was still spitting flurries when I stepped out to the porch. I was horrified to see a hummingbird hovering expectantly in the exact location of last summer’s feeders. If there is Guinness World Record for the speed of dissolving sugar in water, I broke it that day. My face was pressed to the glass until I saw him drink. 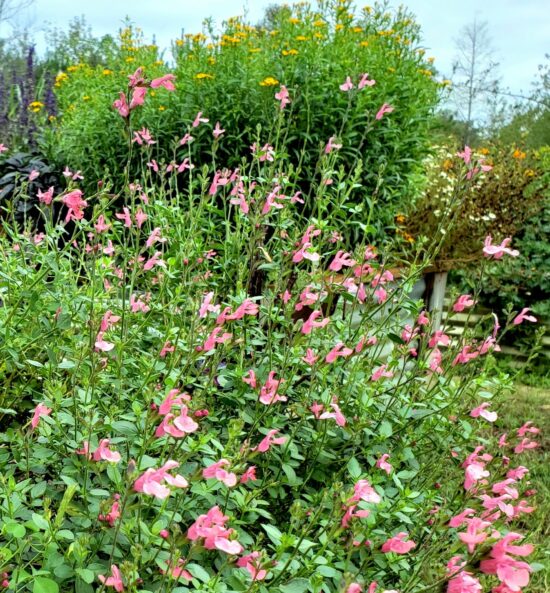 Salvia greggii ‘Glitter’ made a 3′ cushion of flowers in one growing season.

That experience convinced me that hummingbirds come back to the same feeders each year, and bless those people who band the feisty little birds and satisfy our curiosity, because it is confirmed that sometimes they do. I don’t know if hummingbirds dream, but if so, is it ever of my deck on Whippoorwill Hill? I choose to believe so.

There is no dispute over love for hummingbirds, but there is debate about sugar concentrations. Most hummingbird enthusiasts rely on the standard 1 part sugar to 4 parts water as the “best” recipe. However, when I learned that our native jewelweed (Impatiens capensis) has nectar measured at an astounding 43% sugar solution, I set out to research some of their other favorite flowers, and found that many of the salvias they frequent have concentrations in the 30% and higher range.

I knew that hummingbirds were primarily insectivores. As my birding friend put it, they are insect eating birds fueled by sugars. Sugar supplies the necessary calories to maintain their extremely high metabolic rates as they seek the insects they need.

I also found studies that compared feeding frequencies on a variety of solution concentrations. They revealed that hummingbirds fed less frequently on stronger solutions because they only require a certain number of calories per hour. After I read that, I was comfortable in making my solutions one part sugar to two parts water.
Why would I want my hummingbirds to come less frequently? I am helping out little mama. 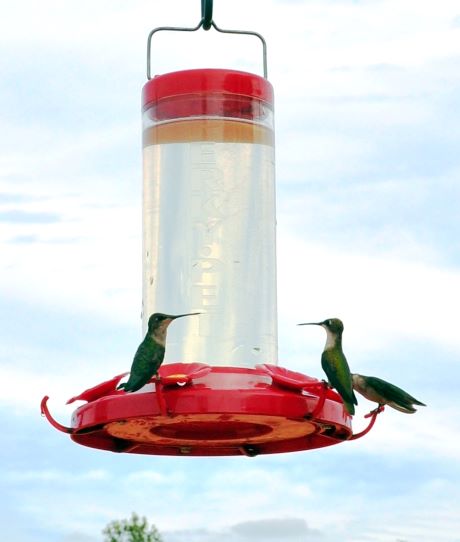 The female has a longer, leaner body, probably because she does all the work. The adult male’s red gorget does not always show if the light isn’t right.

She can grab a quick metabolic fix and tend to her many chores. Many people don’t know that male hummingbirds are deadbeat dads. All they do is supply the semen. They do not help build nests. They do not help incubate eggs or feed the female while she incubates, nor do they help feed the young. They just zoom around being bossy bad-asses at the feeders and looking sparkly, while she is scrapping to feed the young’uns. She must harvest thousands of tiny insects and regurgitate them mixed with nectar into the mouths of the babes, all the while fighting off starvation for herself. Damn right I’m giving her some of the good stuff.

Besides, there is no lessening of activity at my feeders, as far as I can tell. Word must be out that the feeders at Whippoorwill Hill are supplying virtual hummingbird crack. At peak late summer/early fall migration, as the birds are moving back down the continent, I’ll be running eight 48 oz feeders that will require a refill every other day. I buy so much sugar at the grocery store they probably think I’m making moonshine. 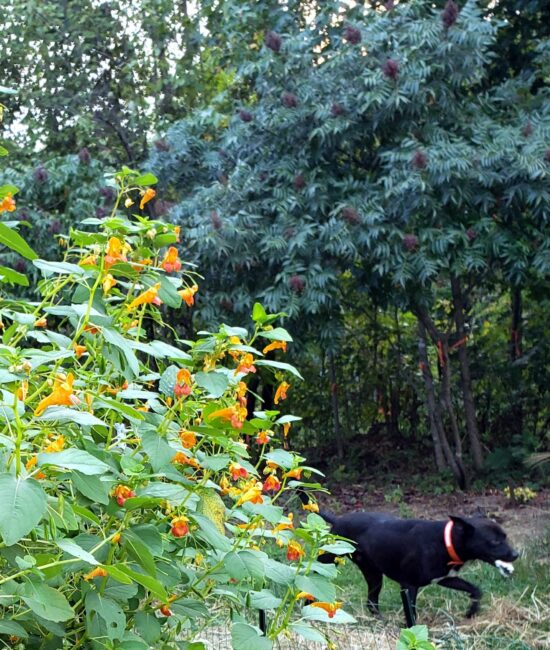 I “captured” some of the explosive jewelweed seeds and managed to establish some of this reseeding annual in my shady areas near the house. Angus doesn’t care.

Not coincidentally, this coincides with the bloom time of jewelweed, a common wildflower in our bottomlands. These blooms are especially adapted for hummingbird pollination, and the hummingbirds benefit from the rich sugar content by building up a little reserve for the big southern push ahead.

Of course, I also plant lots of the hummingbirds’ favorite flowers, especially salvias, both annual and perennial forms. Luckily there are many that reliably return for me here in west Tennessee, a Zone 7, among them selections of Salvia greggii, microphylla and guaranitica. I’ve already purchased five more this spring to add to the growing collection. The blooming plants are not only nectar sources but attract those all-important insects. Oh, and I like looking at pretty flowers too, so there is that. 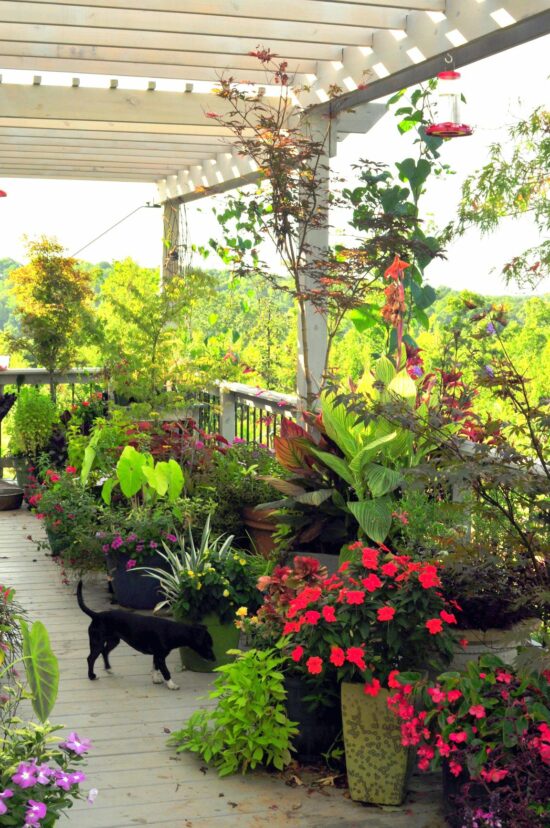 Remember attracting insects is a goal, so not all plants have to be nectar providing “hummingbird plants”.

But back to the less selfish, I am more than a little touched by how many human beings provide for these little birds. Here is the annual spring scenario viewed from outer space. If we had supercalifragilisticexpialidocious eyesight, we would see millions of tiny hummingbirds dispersing up the North American continent, completely unaware of how many million humans are expectantly preparing for them. These hummingbirds have absolutely no idea countless people are writing and underlining SUGAR! on the grocery list, or scrubbing their feeders, or paying for hummingbird plants at garden centers. They don’t know we love them. They don’t care. They don’t thank us.

In a time when it seems especially easy to be angry with fellow humans, does that not make you smile? Keep peering, lovers and friends, they are on the way.