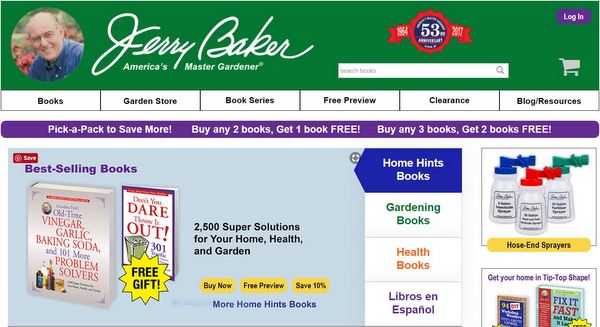 Jerry Baker, the self-styled “America’s Master Gardener” and highly successful huckster for home-remedy books and products died in March of this year at the age of 85. I was curious to see how the gardening world would note his passing, especially those who attacked his teachings, some repeatedly.

I myself started attacking Baker’s advice on my first garden blog in a rant that caught the attention of my future GardenRant partners Amy Stewart and Michele Owens and resulted in their inviting me to join them. I reposted the rant here and most commenters agreed that Baker was more “quack” than master gardener.

My favorite example? He recommends spraying tobacco juice on the entire garden to make it “clean, green and mean.” Organic, natural, and toxic as shit.

I was happy to see that for at least a year, my rant ranked #1 on Google for searches of Baker. It’s since slipped to #5 but another page 1 Google result, on Houzz, also asks in the title if he’s a quack.

Another frequent critic of Baker’s “tonics” and other bad gardening information was Dr. Jeff Gillman, a co-founder of the Garden Professors Blog, where a quick search for “Baker” in the group’s discussion archives yields a rich harvest of rants. And Gillman’s guest rant here titled “When Gurus Go Bad” listed Baker as the second worst.

Since Baker’s passing, I’ve seen dry reports of it, without commentary on the quality of his advice.

For my part, as the blogger who owes her 11 fun years at GardenRant to the god-awful gardening advice I heard Baker give on my local PBS station, I just wonder if the god-awfulness ends with his death or will go on. And the apparent answer is that there will be no end to Baker’s quackery because the website is still up and selling-selling-selling. His “What’s Growing On” blog still shows him actively posting! Only recently did they the “About Jerry” page even mention his death.

Confirmation that nothing will change can be found in his obituary:

Today, Jerry Baker’s wit, wisdom, know how and “grow-how” continues through a business and website by the same name.

And no doubt his videos are still airing on who knows how many public television stations. Oy!

So while certainly I sympathize with friends and family who mourn him, I’m saddened that the gardening world won’t be seeing his bizarre gardening “tips and tricks” finally put to rest.