Thanks to Gary Bachman and Mississippi State for “Southern Gardening” 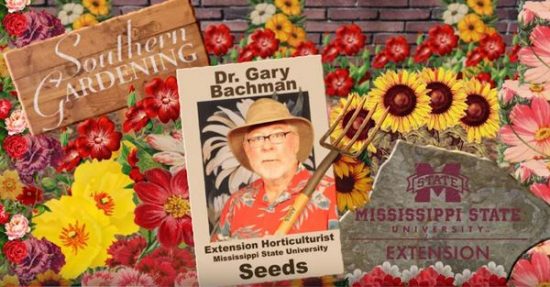 These days I follow dozens of gardening channels on YouTube, especially those of Extension universities, where there are hundreds of good veg-growing videos are to be found. Except for the topic of turfgrass, videos about ornamentals are a lot less common.

So naturally I noticed this guy – Gary Bachman, with an actual Ph.D. – teaching ornamental gardening for Mississippi State’s “Southern Gardening”. The videos – now 190 of them – are made available at no charge to TV stations across the South, about 90 percent of which DO air them on their local news shows. Southern Gardening launched in 1996 and Bachman became the second host of the show in 2010.

In a phone call, Bachman told me that for Mississippi State it’s about using nontraditional ways to teach the public to garden. Besides local TV, the videos are available on YouTube, on Facebook, and as a podcast. There’s also a weekly Facebook Live event that’s “strictly no-script.” Bases covered!

The approach taken in the videos is very much “Here’s how to have a pretty garden.” In fact, Bachman told me was directed to make “pretty videos that get people into gardening” and “We need sexy color to get people’s attention.” I call that knowing your audience.

Something else nontraditional here is Bachman himself, with his costumes, TV spoofs (see “CSI: Crimes against Horticulture”) and the occasional witchcraft.

It sure seems to be working. Southern Gardening is the most recognizable Extension activity among the public, with a weekly audience of 400,000, in-state alone. The Southern Gardening newspaper column that Bachman pens each week is also popular, adding to SG’s total weekly reach of 2 million people.

Which makes me wonder how, with other Extension U’s seeing reductions in funding, Mississippi State has continued to provide such extensive public outreach? Bachman says it gets funded because the audience numbers generate LOTS of “contacts,” which in the Extension world is how states assess its impact. And the public clearly loves it.

Episodes are filmed in-house by the University’s Agricultural Communications Department, using a team of three when they’re on the road.

I wonder too if this Extension program in particular benefits from national Extension’s roots in agriculture, which is still such an important segment of the Mississippi economy. Their extensive programming for farmers includes the weekly show FarmWeek.

I was also curious about Bachman himself, with his aging hippie look (my tribe!) and no Southern accent to be heard. Turns out he grew up in Detroit, where he stayed through his first career with a tool company. Then afflicted with an itch for change, he moved to South Carolina to study horticulture at Clemson.

Having moved northward from the South myself, I wondered how he’d adjusted to the reverse migration, landing in the Deep South, no less. Well, shut my assuming-too-much-mouth, he informed me that he and his wife LOVE living on the Gulf Coast in the little town of Ocean Springs, population 10,000.

Sure enough, it looks as pretty as it sounds, and they’re ready for retirement, beating the migration southward from places like Detroit.