Along the Ohio River, the “Garden and Nursery Boat” Sold Plants 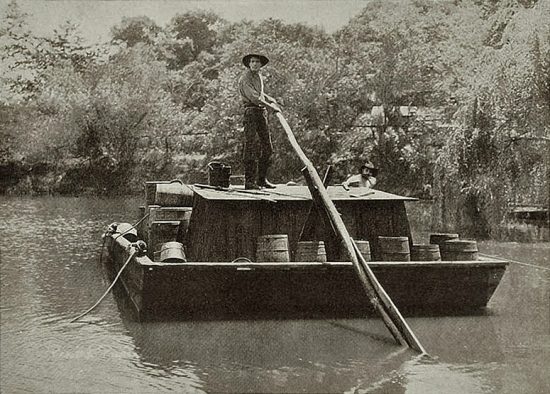 Photo from the 1924 film: The Dramatic Life of Abraham Lincoln.

I stared out my elementary school window for years, bored out of my skull, determined to forsake fractions for adventure. The Ohio River, my escape route, was a few miles away.

My curiosity for the river life was inspired by Huckleberry Finn and amplified years later by Harlan Hubbard’s Shanty Boat and the follow-up, Shantyboat on the Bayous, both published in the 1950s.

Carolyn Brooks must have read my mind when she sent me an email a few weeks ago:

“I am attaching a charming little clipping I found in an 1837 issue of the New Orleans True American. I never know what to do with the wonderful little tidbits I find on subjects completely unrelated to whiskey, but I try and think of somebody who might appreciate them.”

The clipping pertained to botanical goods for sale from the boat of John D. Stack, at a landing in New Orleans that year.

Carolyn Brooks is an historian, currently researching whiskey and brandy arrivals and sales in New Orleans. “Cargoes of whiskey” were shipped down the river, but I had never heard of a garden and nursery boat. I was fascinated with the image of a boatload of plants making its slow way to river ports and gardens unknown.

Harlan and Anna Hubbard navigated the rivers over 100 years after John D. Stack. The Hubbards were resourceful but didn’t care about making money. If they’d been from the same era as Mr. Stack, I can imagine the Hubbards might have tried to barter one of Harlan’s paintings for a half-dozen “splendid double dahlias” and a “variety of garden seeds” from J.D. Stack.

In the foreword to Shantyboat on the Bayous, Don Wallis quotes Harlan Hubbard. “We went to the riverbank, built a shanty boat and began a new life together.” They departed from Brent, KY, near Cincinnati on the Ohio River, and “negotiated the treacherous Mississippi River—“a fool’s graveyard” with their “tools, books, dogs (Skipper and Sambo), bicycle, scraps of material, summer and winter clothing, violin, viola, cello and equipment for painting.” They reached the Louisiana bayous in a little under four years (1946-1950).

The Hubbards stopped to plant vegetable gardens along the way and eventually came back and settled at Payne Hollow, along the Ohio River in Trimble County, KY. Here they gardened, fished, played music, painted and lived a simple and happy life. 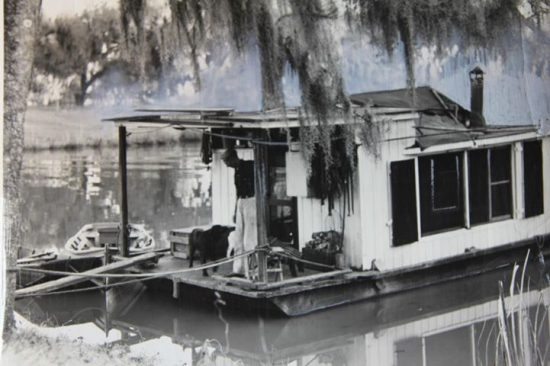 Carolyn Brooks emailed more information about J.D. Stack, the flat boater and nurseryman. “I am a research nut,” she said. 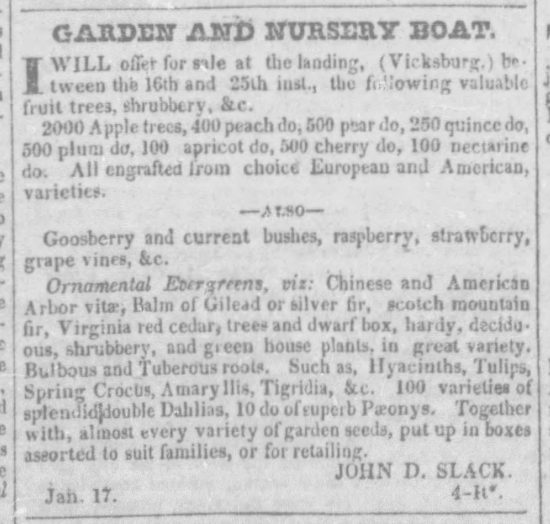 Carolyn adds: “The flatboat trip may have been a one-time venture.  I did find one more wonderful ad from a stop in Vicksburg, MS, obviously on that same trip. He probably made multiple stops as he made his way down the river. Then, as you probably know, the flatboat would have been sold and broken up in New Orleans. It is amazing to think of navigating a flatboat down the river system so far, but it was quite common for the boats to come from Pittsburgh and its environs.”

Years have gone by since I began plotting my future on the river. I didn’t keep pace with my childhood dream. I never made it past the McAlpine Locks and Dam, near downtown Louisville. But I still daydream about floating down the Ohio River and the mighty Mississippi. 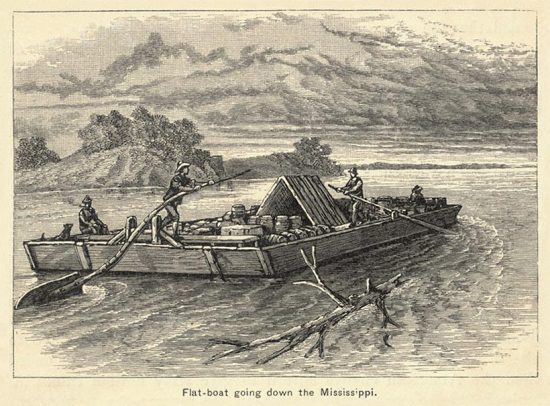 I can see it now.

My own flatboat, or shanty boat, is loaded, full of plants for sale or barter.

Coming soon to a river town near you.