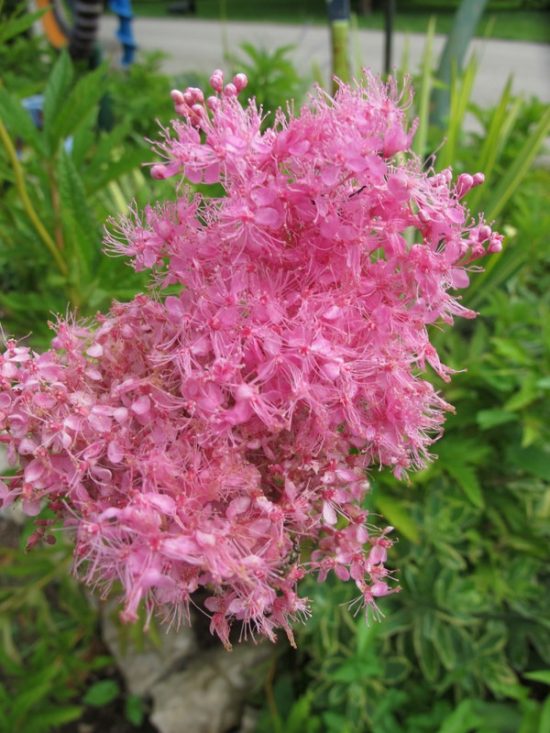 Queen of the Prairie

My lust for the perfect prairie meadow show – aided and abated, of course, with the need for a new septic system – began with the lacy-pink flowers of Queen-of-the-Prairie, or Filipendula rubra.

I had not seen The Native Queen in all her glory until purchasing our history-worn Hoosier farmhouse and six acres of weeds. I’m not even sure now if that American native was already presiding out back in our long-neglected field, or was an early purchase by a would-be nursery owner who had no idea what the hell he was doing.

I just remember Her crown of cotton-candy flowers, deep pink and fragrant, gracefully floating above five-foot stems that one normally non-salacious garden site described as “naked.”

Any way you phrase it, it was love at first sight.

Laugh, if you must, but much of the same literature also mentions that Native Americans used Queen-of-the-Prairie as a treatment for various heart problems and as an herbal aphrodisiac.

I also vaguely remember reading of our early settlers perched in covered wagons resolutely headed west across our prairies while being mesmerized by acres of the floating pink flowers.

I have long wondered precisely what kind of research went into such herbal cures, and how many native plants were required before the patient got it right.

Which pretty much brings our new septic system into the story.

It begins as previous residents of our house apparently tired of walking 50 feet out the back door in January to seek one-holer relief. Some indoor plumbing with outside filtration seemed required. 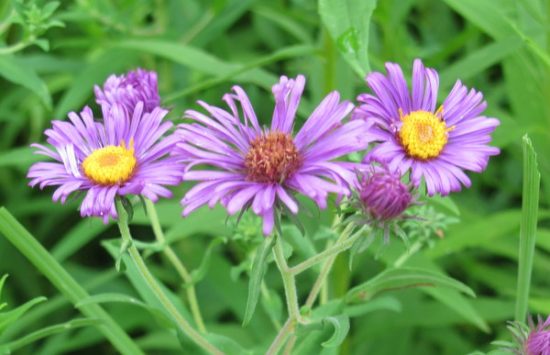 This was back in a time before the EPA, county health officials and perforated plastic drainage pipe. Their disposal problem was temporarily solved with a concrete, hand-poured septic tank and brittle clay tile over which I planted – in total ignorance – a significant quantity of ornamental trees.

That drainage system lasted a lot longer than we had a right to expect, but about five years ago its imminent demise became all too apparent to anyone with a nose. A new septic system was installed by a fine company owned by a guy whose crew included his two sons and his daughter.

They very carefully installed about 300 feet of new lateral lines out in our back meadow, and well away from any woody ornamentals. The field hadn’t been farmed for at least 75 years. Their trench work fully exposed perhaps a quarter acre of deep, rich soil to a guy with a lifetime-lust for a wildflower meadow.

By sheer coincidence I was then also working on a story about a Kentucky company called Roundstone Native Seed on Raider Hollow Road in Hart County Kentucky.

The company was started about 25 years ago by two men – a father and son – picking seeds from a field of Indian grass while carrying five-gallon buckets. It’s since grown into a company selling thousands of pounds of seeds and thousands of plugs for about 300 species of regionally adapted flowers, grasses and legumes across much of the Eastern United States.

Off to one side of their business was a small greenhouse. There was no Queen-of-the-Prairie, but I did find hundreds of other plugs:  Yarrow, milkweed, monarda, aster, rudbeckia, showy tickseed, partridge pea, coreopsis, prairie coneflower, boneset, and yes, Rattlesnake Master. I picked up what was possible in plugs, added a bunch of very fine seeds to the mix, and headed home to begin my meadow. 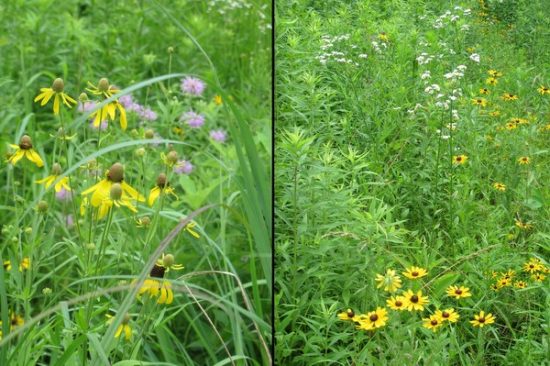 The soil was already bare. I carefully followed all instructions, twice killing emerging weeds with Roundup. I planted hundreds of plugs, purchased a hand-cranked seed spreader, diluted the seed with sand and, with joy in my heart, let em’ fly.

I watched it all grow like an anxious parent, mowed it all close to the ground the first year as directed, looked anxiously after the crop the second year, eager to spot the biennial and perennial wildflowers in full cry.

I could see the finished product in my mind; a blanket of low-maintenance color, the patterns shifting with the seasons, the ebb and flow of Mother Nature shopping for summer wear in Prada, a thing of beauty and a joy forever.

Some wildflower meadow experts recommended an annual burning of the site to kill off unwanted annual weeds and, perhaps, run off the rodents. For three consecutive years my windows of opportunity were lost by persistent rain.

The wildflower literature all waxed poetic about success by the third and fourth years; neighbors lined up to peer at the wonder of it all; birds, bees and butterflies happily flitting and  flying about in nature’s glory. Better yet, generations of monarch butterflies would be calling home to Mexico to offer directions. 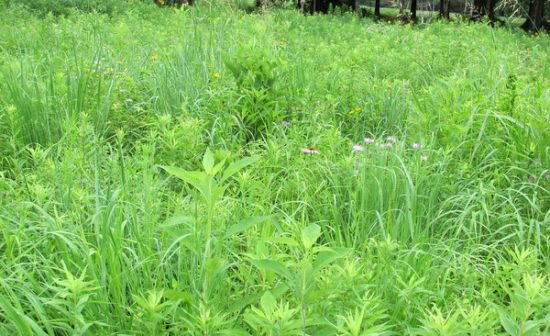 But it just ain’t happening. As I look out across my dream I see bursts of color amidst a vast landscape of, dare I say it, weeds. Save the ubiquitous Johnson grass, I don’t recognize most of it. I only know a few of my wildflowers. I’m mostly a woody plant guy lost in, well, the tall weeds.

I’m now thinking this is a case of willful ignorance meeting high expectations. God sows flowers and the devil sows weeds. All the  literature on the various growing-a-prairie-meadow websites promised that once a garden was established – like in about five years – it would be a perfect and enduring combination of nature, design, ecological greatness, environmental genius and the meaning of life.

Humbug. But I’m not giving up. What’s life without some bitter disappointment?  I do have a fine crop of thuggish, purple-top Ironweed, which tower in tribal triumph over my dismal, weedy wildflower patch.

I also have a couple of fine Queen-of-the-Prairie to sooth my soul. I have no idea where they came from, but they are doing very well out there in my dry, barren and very rocky parking lot, living large in a totally unprepared area among yucca and cactus where they come back every year.

And at least our septic system works.