A Whole Different Spin on Planting in Pots 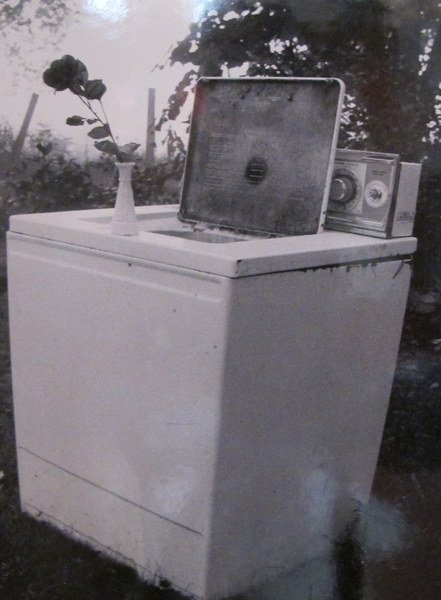 There have been very few opportunities for even the most avid of gardeners to plant bright red geraniums in an old, gray washing machine tub, so pay attention to this one.

The story begins almost 45 years ago as Bob and Janet Hill, garden neophytes whose possessions included two small children, hefty monthly payments on a Volkswagen Squareback and the address of the local laundromat, received an income tax return for $444.

This itself was a financial miracle since that figure was equal to about two-weeks take-home pay. The other miracle was that on the very same day the check arrived Bob and Janet saw an ad in the local newspaper for a washer AND dryer on sale for…please lean forward in anticipation here…$444.

Yes, of course we did. With free delivery and appropriate hoses. The Washer & Dryer Gods had spoken. We Grateful Listeners were so proud of the purchase we gave our new appliances personal names – Max and Edna Hill Whirlpool. The couple served us faithfully and well for a long time and when we finally lost Edna, Bob wrote her obituary in the local paper:

Edna Hill Whirlpool, a model LTA554 washing machine, died in her basement recently after a long illness. She was 15.

Those who knew and loved her were not surprised by the death. Edna had been suffering from loose belts for years and showed increasing signs of spin-cycle failure. She died quietly in her sleep following a load of blue jeans. Survivors include Max Hill Whirlpool, a model LVE570 clothes dryer and Edna’s constant companion for 15 years. Burial will be in the Clark-Floyd County landfill.

Janet Hill – who, in truth, spent a lot more time with Edna than Bob – added her remembrances to the obit:

In retrospect, I think we all took Edna for granted. Toward the end, when her gears groaned or she would fall off her support blocks and dance around the basement, it was tough on all of us.

But Edna was our first washing machine, and we’ll never forget the place she took in our hearts, minds and basement. In fact, we’ve removed Edna’s tub and will plant flowers in it every year.

Call us sentimental, but a promise is a promise, especially when made in an obit. And for the past 45 years we’ve hauled flowered-adorned Edna in car, pickup and moving van to various abodes before settling here at Hidden Hill Nursery & Sculpture Garden in Utica, IN. 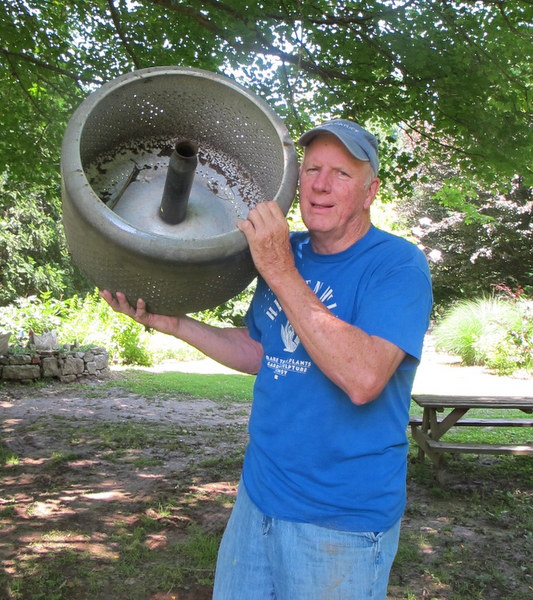 And Edna has proven just as valuable in afterlife as she did while dealing with raggedy sweatshirts, bib overalls and dirty underwear. Her rusty-gray exterior gives even the most anxious of gardeners all manner of color-scheme possibilities.  Her many drainage holes are a natural fit for any plant – sun or shade.

This year, in something of a renewal, we created a home for Edna on top of a small earthen mound. She is perched there between a banged-up, aluminum kitchen sink that came from a Churchill Downs renovation and cleverly titled “The Kitchen Sink” and a slightly more serious piece of stainless steel sculpture that looks, in part, like angry beaver teeth and is titled ‘Precipice.”

Art and nomenclature have always been strange bedfellows.

And if anyone dares mention the fact our new planter looks a whole lot like an old washing machine tub perched on a hill we’ll just say it came with the place; Edna’s feelings do matter. 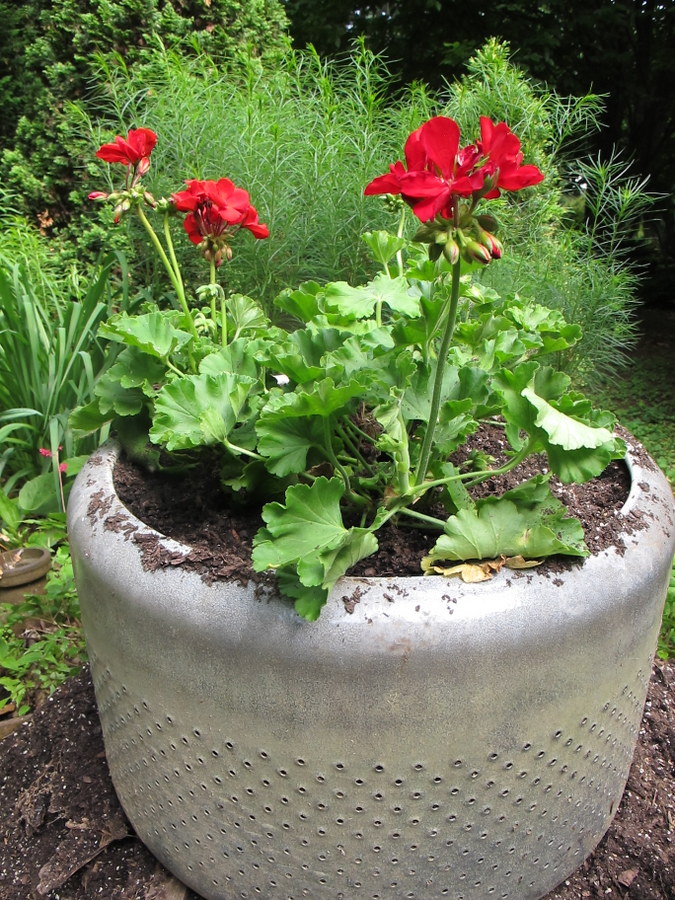 We selected red geraniums for Edna because the tub’s dim gray exterior needed a boost, the plants seemed reasonably priced and research on the word “red” indicated it is derived from the Old English read, which was originally a nickname given to a person with red hair or a ruddy complexion.

How more Edna could you get?

We placed our red geraniums in Edna’s tub while carefully avoiding the detailed, excessive-to-pernicious planting dogma offered by garden experts since Thomas Jefferson shipped in some geraniums from France in 1786 – his planting motto being, of course, “Take things always by their smooth handle.”

I have pretty much smoothed that dogma handle down to three basic rules:

Now it’s all up to Edna. She looks comfortable up there, her red geraniums lording above the box-store marigolds and Sweet William. Our only remaining decision is whether to go with regular or spin cycle fertilizer.