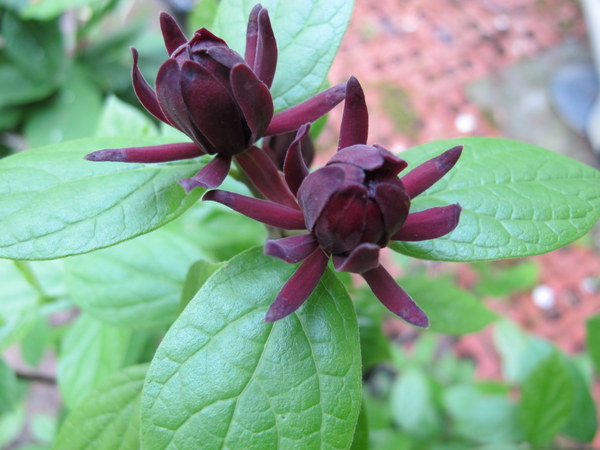 I’ve been spending more time of late wandering our eight-acre landscape both because after 42 years here I keep finding old plants I too often overlook, and, more important, the chances are very slim I’ll find an aircraft carrier either on its way to Australia or North Korea.

Gardening always provides some escape from reality – and at the same time connects us to who and what matters when the television is turned off.

Such was the case earlier this week as I rounded a once-hidden corner of our place and spotted a tall shrub backed up against a hemlock tree in light shade. It was coated in tight whitish buds with a few opened to expose a circle of white petals with purplish centers.

The whole area had recently been rejuvenated-by-chainsaw, adding more sunlight to what had been deep wooded gloom. My reward for that effort – witness the avalanche of white buds – was a 10-foot Calycanthus ‘Venus.’

‘Venus’ is a stunner, or in this case a golf-cart stopper. Its specific history comes in two forms. On the botanical side, according to the precise verbiage of the Missouri Botanical Garden site, ‘Venus’ is a complex hybrid derived from controlled pollination using the following three species: Calycanthus floridus (Carolina allspice), Calycanthus occidentalis (California sweetshrub) and Calycanthus chinensis (Chinese wax shrub formerly known as Sinocalycanthus chinensis). Plant patent PP15.925 was issued on August 23, 2005.) 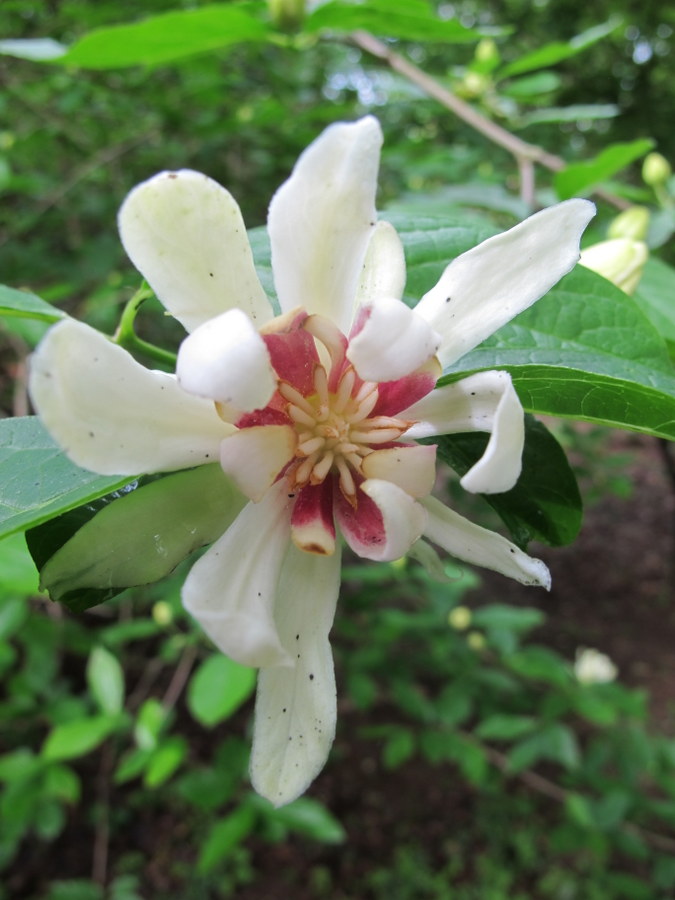 It’s more personal history comes from the fact that patent was the result of the ridiculously diligent work of Dr. Tom Ranney of North Carolina State University who somehow merged calycanthus plants from two continents and one particular state into a special plant now blooming in renewed grandeur in my side yard.

And memory fades, but I distinctly remember meeting Rainey on a long-ago, garden-geek visit to his North Carolina laboratory, and perhaps getting my shrub from the great man himself.

As a guy who can barely get willow cuttings to root, I’ve always admired plant breeders who will spent years – if not decades – mating “Good” and “Good” to get “Better.” One of my original goals when first getting serious about plants during the Jimmy Carter administration was to at least learn to graft plants, but I gave it up upon learning a very sharp utensil was required.

Names like Linnaeus and Bartram aside, we do tend to forget the details of the people and stories behind the plants we love, and then rediscover them while off in the yard on a golf cart, or some such.

That’s wrong. Gardening is a community linked by long history and fine people – even when you’re out there all by yourself planting the most recent of the 56,000 heuchera cultivars.

The calycanthus is a particularly good example of that. It’s as close to a perfect plant as it is underused. It’s easily grown, appreciates some moist shade, offers a cloud of fruity fragrance, has a nice yellow fall color and minds its own business in the meantime. Whack it back after the spring fragrance has faded and it’s all about repeat performance.

Its American native-plant history, it’s many alternative names,  including Carolina allspice, strawberry shrub, spicebush, Sweet Bettie and even Bubby Bush or Sweet Bubby, give it some allure. One old folklore story has the latter nicknames connected to women placing its fragrant blooms in hidden, chest-area places as a perfume.

And perfume the calycanthus offers, although, truth be told, while Venus has a reputation for fragrance, my favorite olfactory stimulator by far is Calycanthus floridus ‘Michael Lindsey.’ 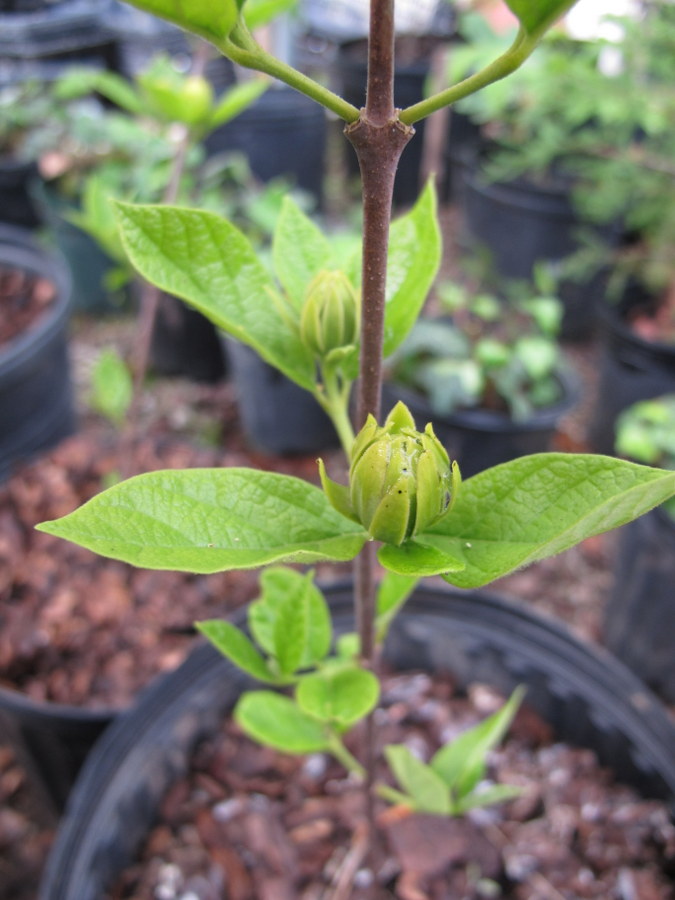 It, too, comes with a story – actually a series of stories – that connects distant gardeners. My original ‘Michael Lindsey’ was a gift from plantsman and fellow Garden Rant Raconteur Allen Bush. He selected and then introduced it while owner, plant propagator, head weeder and main waterer at his late-great Holbrook Farm and Nursery, which was also in North Carolina.

Bush named the plant for the new-born son of one of his staff members. It came to me in about a gallon pot with some operator instructions and best wishes. Two years later it bloomed with the captivating fragrance of strawberries dancing with pineapples. For years I’ve dug up tiny sprouts from the roots beneath the shrub and potted them up for sale – spreading the story for fun and profit. That’s what friends are for.

North Carolina and the Calycanthus plant also took center stage with the creation of ‘Hartlage Wine,’ a plant with “yuge” maroon flowers of some fragrance and green-leafed presence. Given the Latin name Calycanthus raulstonii, it was developed by student Richard Hartlage at – you guessed it – the JC Raulston Arboretum at North Carolina State University and named for the legendary J. C. Raulston, who helped in its development. 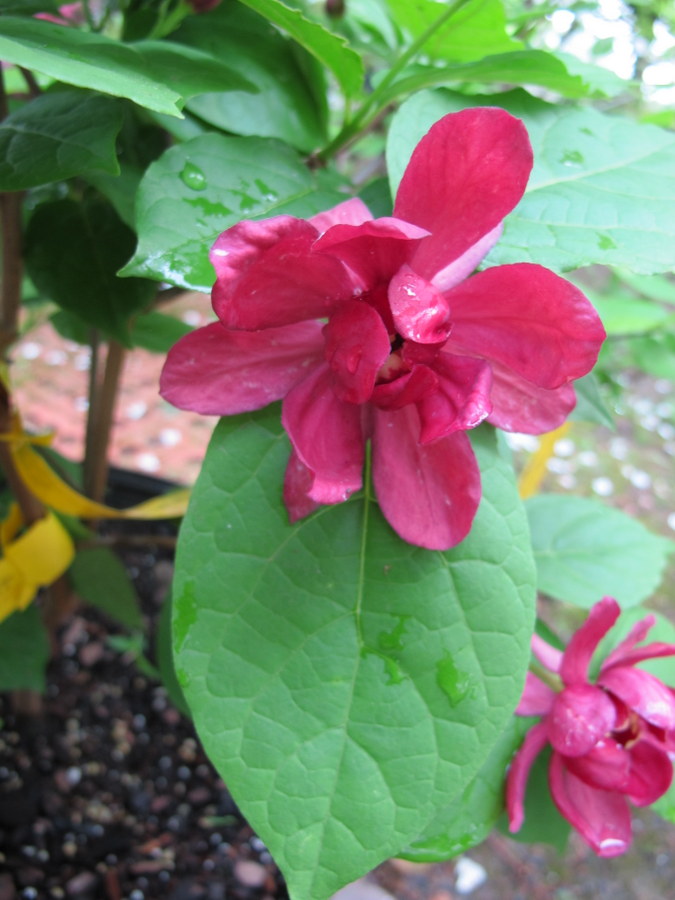 The calycanthus story line does not stop there. I recently returned from a trip to Song Sparrow Farm and Nursery in Southern Wisconsin where always generous plantsman Roy Klehm passed on his favorite calycanthus selection, ‘Roy’s Dark Red,’ a seedling selection with extra deep dark red flowers and accompanying fruity presence.

The day I got it home an old plant buddy showed up. We got to talking about our favorite calycanthus plants and he began bragging about the yellow-flowered form he had, ‘Athens.’

That plant came into the trade through the efforts of Dr. Michael Dirr – a plantsman known and respected by everyone mentioned in this story including its author – who said the original ‘Athens’ was a gift to him from a Jane Symmes of Madison, GA.

So, my old buddy and I got to standing in the driveway and arguing about which was more fragrant, ‘Michael Lindsey’ or ‘Athens.’ To help make his point, the next day he brought me five ‘Athens’ seedlings to do a smell test myself.

I gave him in trade a new hydrangea, a Cornellian cherry and a rare dogwood.

And so it goes.