My Granddaughter and I Take On Johnny Appleseed 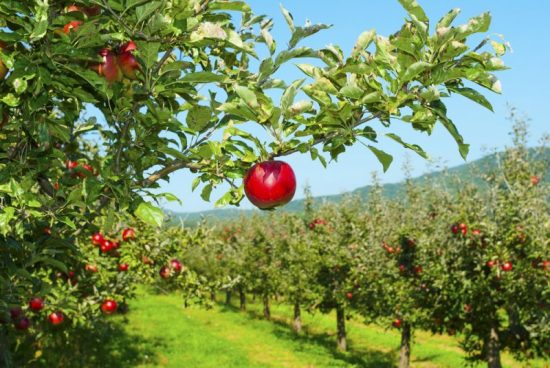 Should we strive for a “blemish-free, plastic-red saccharine orb” in Salvisa? I don’t think so. Shutterstock photo.

As a young boy, I would have chosen a gumdrop tree over an apple tree any day.

Baked apples, applesauce and candied apples were my answer to An Apple a Day. Any apple coated with sugar was worth sampling. My mother would throw a fresh apple into my lunch box, but the Hostess Twinkie was what I wanted. That fresh, locally grown apple was there in case of starvation.

But last year, with a little more seasoning, I returned to apple trees. Until then ‘Cox’s Orange Pippin’ was the only apple I’d ever planted. The delicious dessert apple, very popular in England, died from neglect the first year. That was 35 years ago. It has taken me this long to build up courage to try growing apples again.

I planted a little orchard on our farm in Salvisa, KY, last March. Four trees. The heirlooms ‘Black Twig’ and ‘Arkansas Black’ will be new additions this year.

My friend, Jamie Dockery, the multi-talented gardener and County Extension Agent in Lexington, KY, gave me some variety suggestions and some good advice. He suggested ‘Redfree,’ ‘Enterprise’ and ‘Liberty.’ I added the heirloom ‘Albemarle Pippin’ to the mix.

I’ve been more attentive with my apple trees this time around. I watered the initial planting last year during dry spells. I also protected my orchard from deer and rabbits.

I’ve read some good apple books in the last few years. Apples of North America, Old Southern Apples and Apple, A Global History have provided interesting information. Michael Pollan’s engaging essay on Johnny Appleseed in Botany of Desire is a great read, too.

Appleseed, a clever entrepreneur was “planting orchards in the wilderness.” He sold two-to-three-year-old seedling “whips” to pioneers for a few pennies. His trees were planted on homesteads for home brew production. Hard cider was “the gift of alcohol to the frontier.” 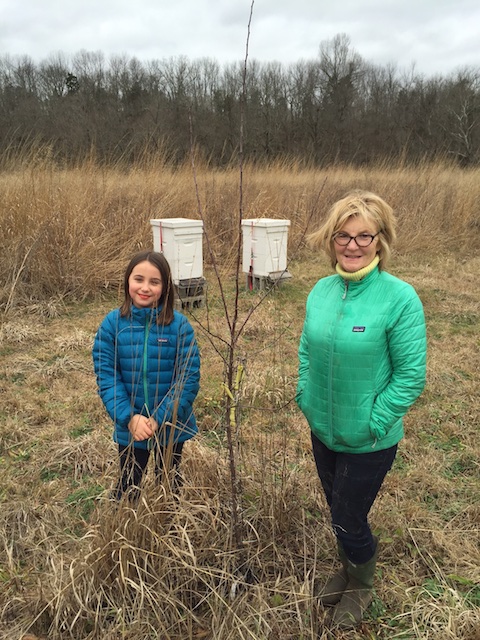 Story and Rose in the Salvisa orchard.

A few fresh apples and some sweet cider is our goal on the farm in Salvisa. Eventually, I’d like to produce apple cider with Story, my 8-year-old granddaughter. Neither of us knows what we’re doing, yet we’re game. But someday, I might honor Johnny Appleseed and make a little hard cider.

Annie Proulx’s “Making the Best Apple Cider,” a bulletin published by Storey in 1980, is my best source for learning how to make cider. Proulx went on from writing instructional bulletins to win the Pulitzer Prize (1993) for Shipping News. Her short story Brokeback Mountain was turned into an Academy Award Winner.

Story and I are a few years away from pressing apples for cider.

Our small orchard could produce a lot more apples than we’d ever need for fresh apples or cider. Or it could produce none at all.

I’ll never be able to produce the “blemish-free, plastic-red saccharine orb,” the commercial apple of supermarkets that Michael Pollan describes.

I don’t plan to spray our apples, except perhaps with a dormant oil spray in late winter. So any apple harvest will be a crapshoot. Scab, cedar apple rust and fire blight will be persistent threats. Stinkbugs and Japanese beetles could be a nuisance, too. 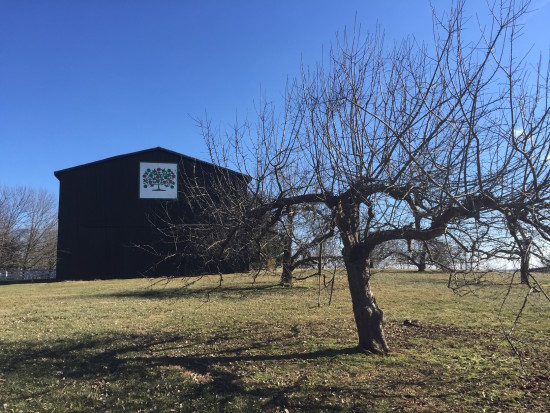 Apples traditionally were a local crop, wherever apples could be grown. Market conditions changed in the 1980s. The big Washington state producers figured out that they could refrigerate apples and ripen them, as need be, with ethylene gas, then ship them to market all across the country, whenever they wanted. Western North Carolina, where I was living in the 1980s, had a vibrant apple industry, based on fresh apples. The North Carolina mountain-grown apples had a market advantage. They were the first to naturally ripen in the U.S. The Washington State apple growers, as well as developers interested in mountain property for retirees, killed North Carolina’s apple industry.

Story and I can’t compete with the Washington state growers. But we are, with our tiny orchard, picking up where Johnny Appleseed left off. Appleseed planted apple seedlings all over Pennsylvania, Ohio and Indiana. He didn’t know a thing about ripening apples with ethylene.

Story and I share some of Appleseed’s instincts. We’re homegrown apple speculators, too.