Nowhere else on the planet will you find anything that compares to the geeky and up-to-date Garden Rant coverage of hackberries. Last week’s Guest Rant by Scott Beuerlein nudged the door on the belittled common hackberry. This week we will attempt to blow the door wide open with the dwarf hackberry. Does anyone care? 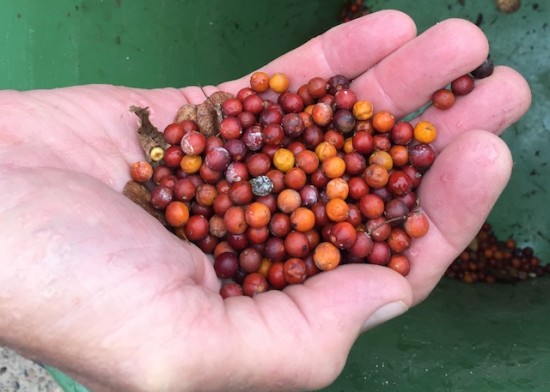 Seeds of the dwarf hackberry.

Never in my life did I imagine I would spend several days searching for hackberry seeds.

And then an email arrived last March.

Mike Hayman asked if I knew the dwarf hackberry, Celtis pumila (tenuifolia). He also wondered if I had any idea where he might find seeds.

I claimed ignorance, my occasional state of mind, but this was not numbskull stupidity. It was, instead, a shining awareness that there was much more to learn about a tree, growing nearby. I found this exciting in that way that Thoreau did when he wrote, “It is not what you look at that matters but what you see.”

David Fothergill, a Louisville native and landscape designer for the National Forest Service in Helena, Montana, had tipped off Hayman. Fothergill had seen Celtis pumila (tenuifolia) growing in the knobs of the Jefferson Memorial Forest, less than 20 miles from my Louisville home. 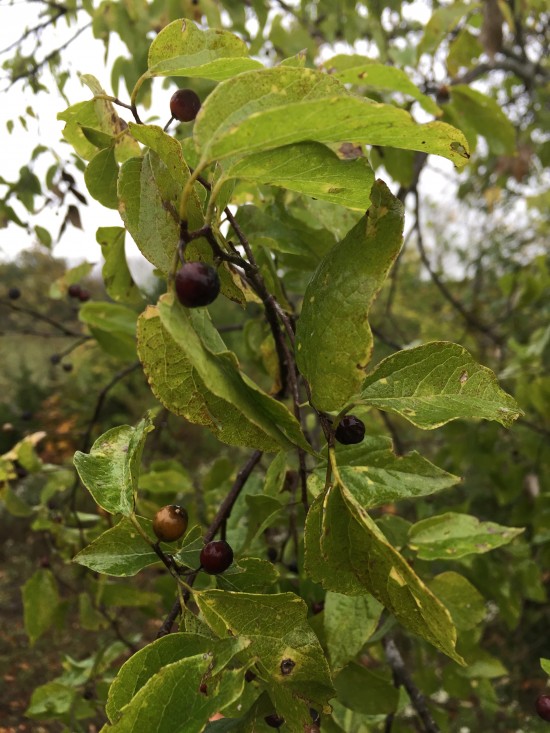 Celtis pumila was new to me. It’s a lower-growing hackberry, not at all rare in Kentucky, but one I had not noticed before. Hayman thought the dwarf hackberry might be a potential urban street tree.

Louisville is struggling with a diminishing tree canopy and holds the ignominious distinction of having one of the nation’s top five hottest urban heat islands. The city, alongside a variety of non-profits, is planting more trees to cool down the urban core. The tree lovers among us are hoping the mayor makes a bold and sustained public relations effort to promote the public-private initiative all across the city. His personal involvement, connecting the dots in Louisville neighborhoods, from Fairdale to Pleasure Ridge Park, Shively, Buechel, Smoketown, and down to Portland, is integral to whittling down the tree canopy deficit.

Mike Hayman, a retired Louisville Courier-Journal photographer, plants trees—lots of them.  He knows tree sources, makes contacts in neighborhoods scattered around the city, finds planting locations, secures funding and plants the trees. It’s a productive urban tree-planting model without the usual frustration of politics and a stifling bureaucracy. 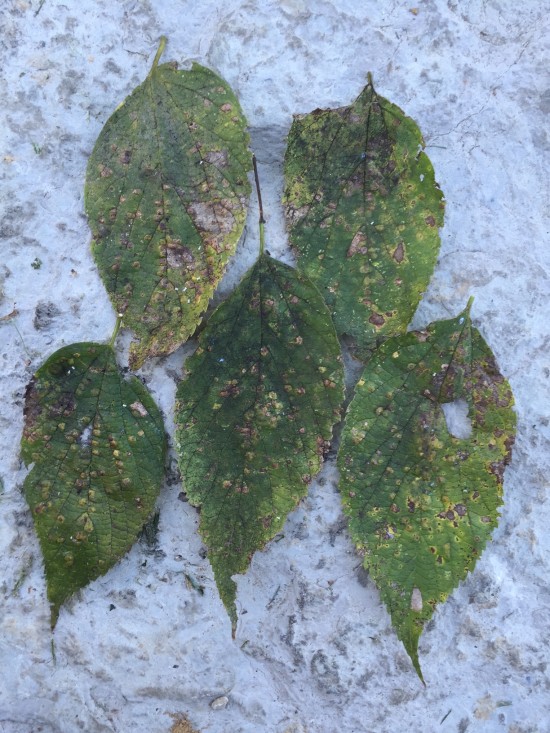 Leaves of the common hackberry.

I’ve got common hackberry seedlings (Celtis occidentalis) that seed bomb my garden every year. And there are a dozen or more volunteer hackberries growing along our back alley, within 50 yards of our garden. No one bothered to weed them out as seedlings, many years ago, or thought to cut them down once they took hold. So there’s been no love lost between us.

Hacberries have been the punch line of jokes in plant geek circles for years. Although many will admit that hackberries are hard to kill, rare is the gardener who courageously sings common hackberry’s praises. Scott Beuerlein is the rare exception.

Celtis occidentalis has anemic-looking green leaves that often become deformed with spindle galls. These leafy pimples never seem to cause serious damage, but they’ve caused the tree to be shunned as an ornamental. Still, all shades of green have a role to play in this story. And the distinguishing bark of the common hackberry can even be stunning. 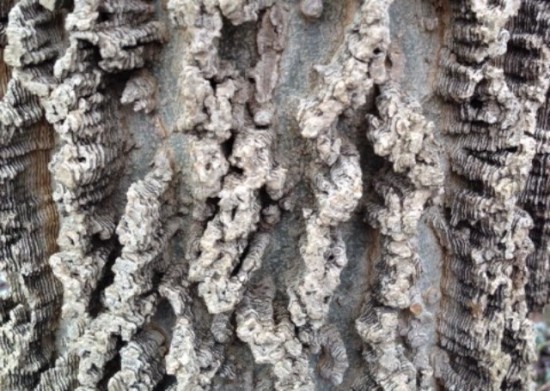 Distinctive bark of the common hackberry.

Hackberries were once relatives of elm trees (Ulmaceae family) without the charm. Of course, the Dutch elm disease has decimated the American elm. No charm in that. Hackberries, however, are nearly indestructible.

The genus Celtis got shuffled to the (Cannabaceae family) a few years ago and now claims kinship with reefer. Don’t ask me how hackberry and marijuana rolled together. DNA diagnostics is lab coat science; I’m just a dirt gardener.

Even after forty years of close observation in nature, I freely admit: I don’t know diddly about dicots or hackberries. 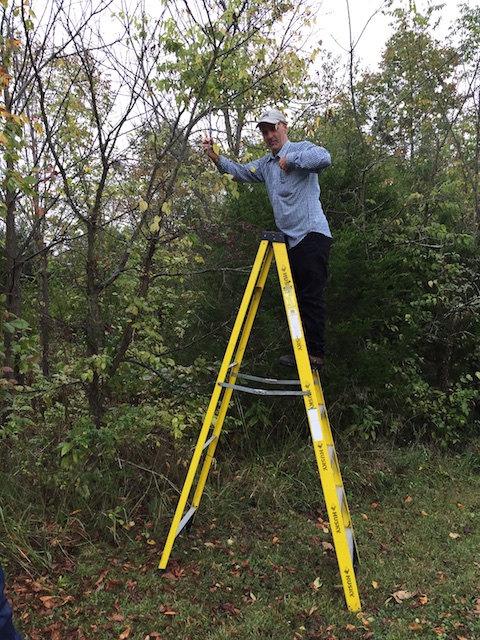 Julian is the one I contacted with Mike Hayman’s initial inquiry concerning the dwarf hackberry. He responded right away, saying he knew where some Celtis pumila were. Julian knows where many of Kentucky’s hidden treasures are. He plays at pro level in the plant world.

Last month Hayman reminded me that it was time to go looking for seeds. Julian Campbell led us to Franklin and Bullitt Counties, short distances from Louisville. Hayman even went to Adams County, Ohio, to collect with plantsman and amateur botanist Daniel Boone, a direct descendant of the famed Kentuckian. Trees were growing in poor, dry conditions that meant they might adapt to restricted urban conditions. 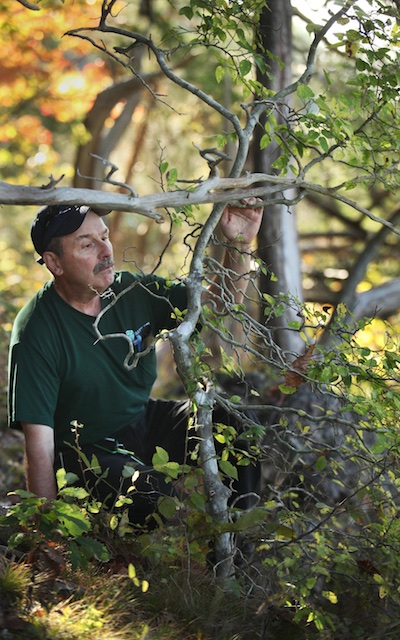 Andrew Berry, Forester at Bernheim Arboretum and Research Forest, told me there was a naturally occurring bonsai of the dwarf hackberry on his farm in Mercer County.

The Beatles, Eleanor Rigby, kept banging around in my head, during the search for the lonely Celtis pumila.

All the lonely people

Where do they all come from?

All the lonely people

Where do they all belong?

Hayman sent six accessions of Celtis pumila seed to the Woody Warehouse in Indiana. The nursery is a good source of native tree species. They will sow the seeds. The projected timetable (from seed sowing to ready-to-plant one-inch trunk diameter in seven gallon grow bags) will take approximately three years. 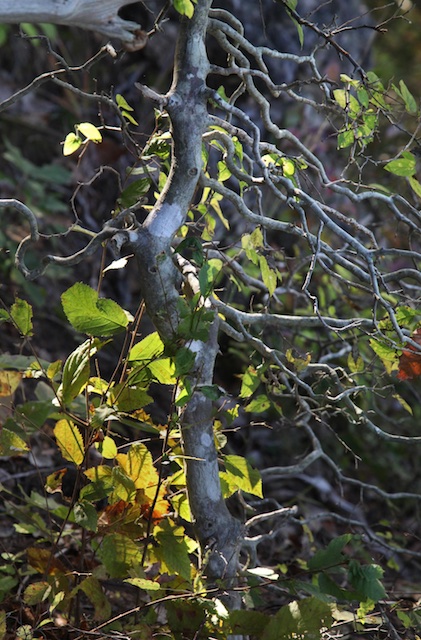 It’s still little more than a fantasy but it’s exciting to imagine that one day the forlorn dwarf hackberry might find a home on city streets, hell strips, vacant lots and in Louisville’s parks.

There’s now a small fan club for the dwarf hackberry. Well, at least a half-dozen of us. There might be more to come.