John Steinbeck crossed the country with Charley in 1960. I rode to Louisville last month, from Pennsylvania, with Rufus. Steinbeck, who wrote Travels with Charley, made the road trip with his standard poodle in a camper truck. I took Rufus home in a rental car.

I met Rufus last month at the marvelously lighted home and garden that Michael Bowell shares with Simple, near Malvern, PA. 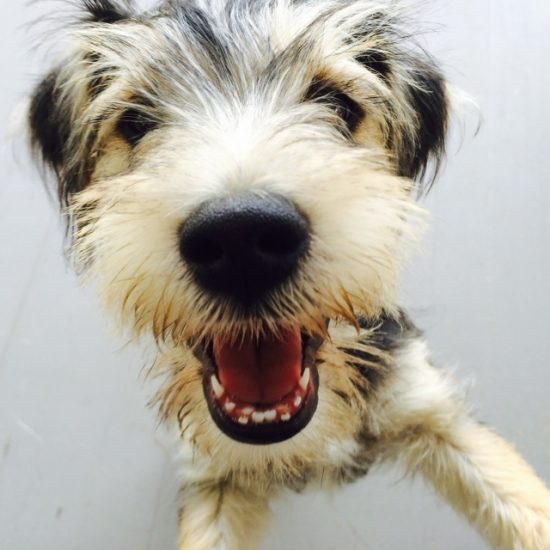 I stayed there for three nights during the week I spoke at the Swarthmore College Perennial Conference. The last thing I expected while there was to become smitten with a puppy.

Rufus is a cute mutt with sterling breeding. Willie, a handsome Jack Russell (with a hint of beagle), is the poppa, and the mild-mannered Mona Mae, a miniature schnauzer, the momma. (Does this make Rufus a Jack Schneagle?) Also running around the house, were brother Skeeter, sister Luella and a pack of assorted other dogs. Rufus, who is now 19 weeks old, seems surprisingly smart—a trait I’d not been privy to with any of my previous dogs. I emailed photos to Rose, and she approved the adoption on appearance alone.

The great gardens and nurseries around Philadelphia are buzzing with innovative professionals. I had excellent company showing me around the whole week.

Simple took me on a quick spin of “Michael’s Land,” the garden he shares with Michael Bowell, before we headed to Chanticleer. Their home and garden are bursting with festivity day and night. Colorful nighttime lighting—in the garden and home—is a feature that no one does better than Simple. He has, in addition to his home turf, installed LED lights high in the trees of his friends Bob Yungman and Vince Pompo that cast hundreds of tiny blue dots on the ground as well as in the tree canopy above.  “Oh wow, man!” is the usual trippy response.

Nighttime is the right time at Simple and Michael’s.

I can’t think of a garden, anywhere, so creatively staffed as Chanticleer in Wayne, PA. The formula seems simple (pun intended): stack the deck with ambitious and passionate plantspeople, then give them adequate resources and ownership of place. If that’s not the case, then Chanticleer must be a piece of divine providence

Simple and Michael took me to Andy Schenck’s home garden at dusk one evening. Andy and his wife Amy had adopted Rufus’s brother Buster the week before. Andy, who is the nursery manager at Sam Browns Wholesale Nursery, has a garden packed with rare trees and shrubs. Witch hazels, hydrangeas, crape myrtles, magnolias, a weeping bald cypress, a dwarf river birch, on and on—a plantsman’s paradise. 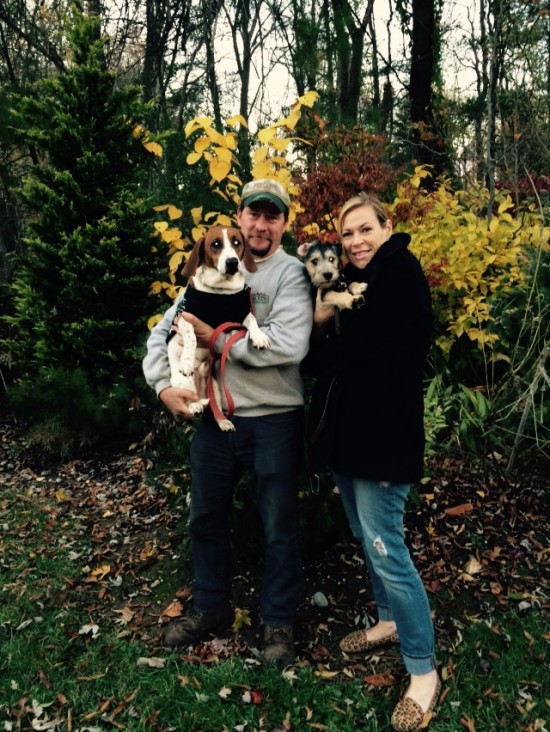 Reggie and Buster with Andy and Amy Schenck.

The plantings reminded me of the early days of the J.C. Raulston Arboretum in Raleigh, NC.  J.C. would travel around the country, picking up rare finds and then planting them in his 10-acre arboretum. Eventually, they’d outgrow their space, and he’d find them a new home, to make room for more new trees and shrubs.

Andy comes from the J.C. Raulston School of Casting the Net Farther. Andy’s a very talented and passionate nurseryman; he knows how to dig trees and shrubs. And when his garden gets full, he’ll find new homes for some of his babies. (Note to Andy: did I give you my phone number?)

I spent another two days with nurseryman and mad plant scientist Bill Barnes. Barnes is a psychic descendant of Gregor Mendel.  There’s little in the plant world that doesn’t intrigue Barnes. Rudbeckia, Penstemon, Clematis are on his radar breeding screen. And the entire Malvaceae family (Hibiscus et al) is an ongoing “active challenge.”

I swallowed all pride at Swarthmore’s Scott Arboretum the next day while Barnes stumped the chump (me!), asking over and over: “Ok, tell me what tree this is?” (I hadn’t seen the bodacious Euscaphis japonica since J.C. Raulston introduced it, following a 1985 Korean expedition. I love the red seed capsules, but I’d never guessed the Korean sweetheart tree might grow to 20 feet.)

Though I wish there had been more time to visit other area gardens, Chanticleer and the Swarthmore’s Scott Arboretum are not to be missed. The 425-acre Swarthmore campus was recently named the most beautiful liberal arts college in the United States. 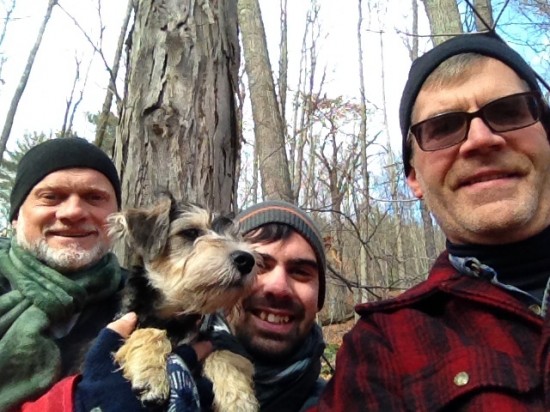 Swarthmore’s Perennial Conference was outstanding. I enjoyed the other speakers from beginning to end. The daylong event sold out with 600 attendees.

Rufus rode shotgun on the 14-hour drive to Louisville. We passed by Amish Farms flying clotheslines hung with clean laundry. Hillsides were dotted with orange and yellow maples, roadsides lined with pink and red sumacs.

Rufus and I stretched our legs, and took breaks at rest areas along the Pennsylvania Turnpike. I skipped lunch with Roy Rogers but looked over the book section of the adjacent convenient store. Bonhoeffer: Pastor, Martyr, Prophet, Spy was a little more adventurous than anything I’d expect to find at a Cracker Barrel. On the other hand, the Cracker Barrel’s Beans and Greens beats a Roy Rogers bacon cheeseburger, dressed up from the Fixin’s Bar, any day. 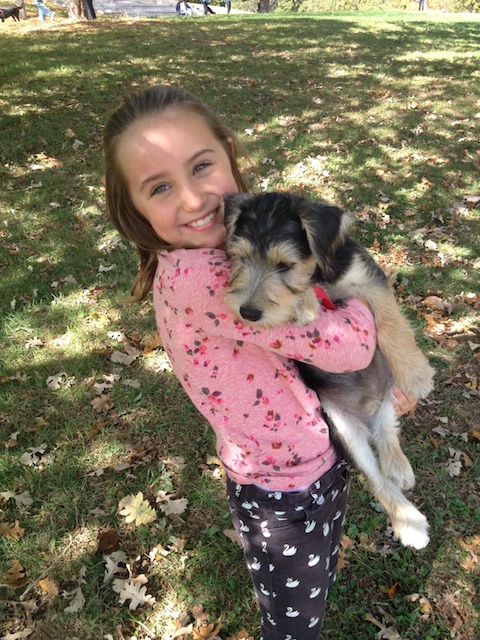 The young pooch has taken well to Kentucky. Rufus has been with us now for a few lovely autumn weeks. He’s just as much at home in the city as he is in the country. He didn’t bat an eye when the leaves on our Louisville black gum, Nyssa sylvatica ‘Red Rage,’ turned outrageously red. And he ignored a north sloping hillside of paw paws, in nearby Cherokee Park that turned blazing yellow. The first hard freeze fell on November 1st and didn’t faze the young boy at all. 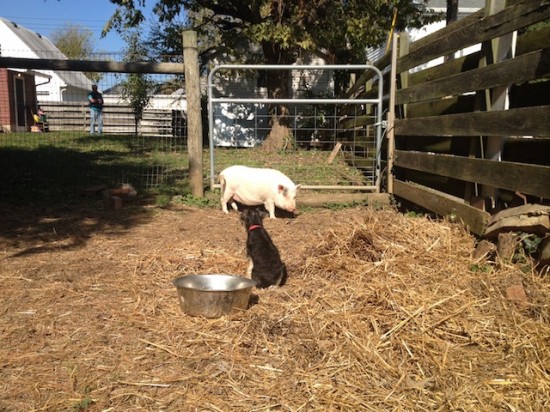 Rufus has been focused, instead, on making friends. He is a sociable little thing. He sniffed the other dogs on Cherokee Park’s Baringer Hill and even met Penny, my daughter’s pot bellied pig. Penny ignored him.

Rufus has been especially curious about the countryside around Salvisa, Kentucky, where we spend a couple of days each week. He’s alert and cautious to the wailing coyotes at night, but during the daytime he’s starting to roam farther into the tall grasses of the meadow. Rose and I are worried about his instinct to go down a groundhog hole and stay for a day or two. That’s what Jack Russells will do. 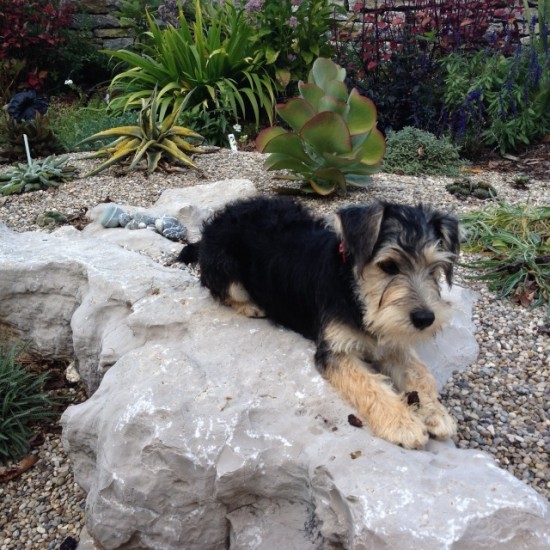 Rufus in the scree garden in Salvisa, KY.

We’d rather Rufus stay above ground, roaming the scree garden and digging around the border among the elephant ears.

I know it’s only a coincidence, but Joe Henderson and David Mattern of Chanticleer and Jeff Jabco of the Scott Arboretum (The Three Dads) adopted Skeeter 10 days ago. I am a so happy that Rufus’s brothers both found good homes with great gardeners. Any mole problems will be short-lived.