Driving in Alaska with My Three Miss Daisies

Bears loomed large last month in Alaska, but there was more danger lurking for a scrapulation.* Close quarters and too much family togetherness always make for a menacing vacation threat. Rose, my daughter Molly, granddaughter Story and I spent ten days driving around south central Alaska. I’m happy to report that there were, from beginning to end, no dust-ups; no car doors slamming and no, “I’m outta here!”

We had a great time.

What’s up with that?

A few compromises were called for. 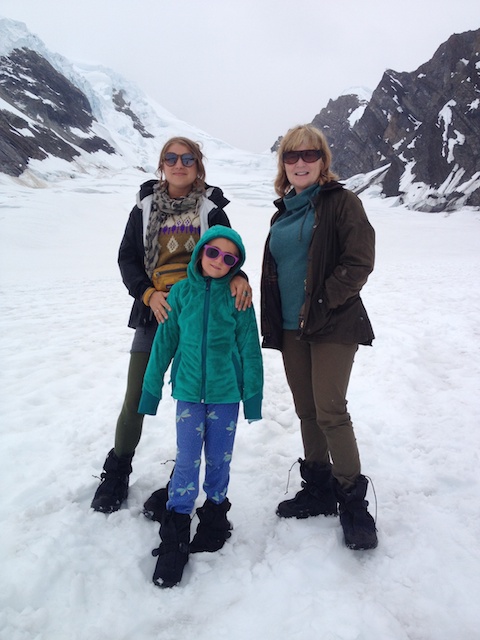 I was bounced as the principal driver on the first day. I couldn’t even drive the Miss Daisies. Molly took over. Aggressive Alaskan drivers and caravans of RVs would not get the best of my girl.

This meant I couldn’t hog all the time, either, with my habit of insisting that we pull over every 20 minutes, whenever I saw something in bloom or in fruit.

I didn’t give up much, though. My Daisies love flowers, too. Rose and Molly are gardeners. And Story, who is seven, could be a poster child for the national effort to get kids off their asses and out of the house.

Not long ago, Story came bouncing into our house and said, “Babu, let’s sow some seeds.”

How had a child, then five, reached a point in her young life where sowing seeds could, in any way, be considered desirable or fun? She’s spent much of her life outdoors and is a shining hybrid of genetics and nurture.

Imagine if a poll were taken of American elementary school kids with the simple question: “Hey, kids, would you like to sow bean seeds after school today?” There’s little doubt that the response would be an overwhelming NO! The fact that Story asked me if we could sow seeds would tend to suggest either an empirical anomaly or some delightful evolutionary advancement.

I collect seeds from the garden and the wild all season. Normally, I have seeds stored in various places. I save seeds to spread around or send in small envelopes of promise to Jelitto Perennial Seeds for trial. (I’ve got seeds of dianthus, asclepias and allium to clean this week, for instance, before I ship them to Georg Uebelhart, my Jelitto colleague.)

I couldn’t find anything for Story in the house. I put some pebbles in a seed packet, gathered the eager young gardener, and out we went to the garden. She eyeballed the contents and said, “Babu, these are rocks.”

“They’re fine,” I told her. We sowed the pebbles.

I went to the hardware store the next day and bought some kale seeds to plant with the pebbles. The kale sowing showed the promise of a glorious young crop but was cut short by slugs. 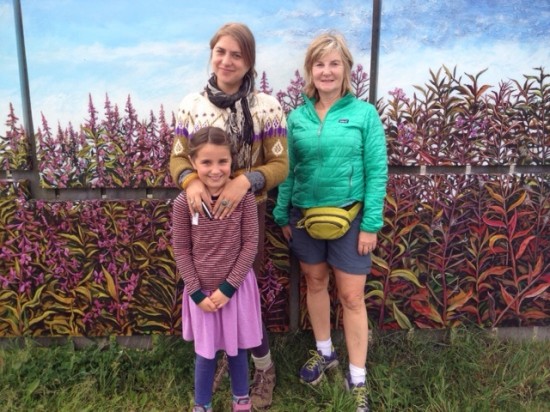 Alaska delivered fully on great vistas, glaciers, whales, moose, bald eagles and sand hill cranes. Even with fall in the air, there were some lingering August wildflowers. I never grew tired of roadside patches of the circumboreal pink-blooming fireweed, Epilobium angustifolium. Watermelon berry, bog rosemary, crowberry and sweet gale were all in fruit.

We didn’t see any bears until our last day, and we had to pay to see those. Grizzlies and black bears, we were told, were gorging in the wild on blueberries and busy stalking the rivers for sockeye and chinook salmon.

A long winter’s hibernation was a few weeks away. Nothing will be sleeping in Story’s memory.

*We have a groundhog hunter who shows-up on our farm periodically with her Jack Russell terriers. The dogs, whenever they go into a hole, meet the varmints and get into what she describes as “a scrapulation.”