Lambèrt Vrijmoed, a British Columbia nurseryman, once drove a Pontiac hearse as his get-around car. There was not a hint of Goth subculture about him, though there was a touch of the madman. But this is not such a bad thing. The best gardeners, designers and nursery folks follow a different muse. 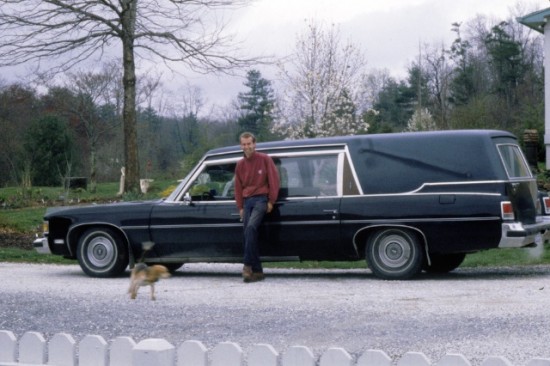 Lambèrt’s hearse at Holbrook Farm and Nursery, Fletcher, NC in 1995

In 1994 Lambèrt came to the U.S. from Terborg, Holland, on a one-year visa to work at Holbrook Farm and Nursery in Fletcher, NC. He’d worked there for me the previous year, and I was thrilled that he wanted to return.  He was smart, hard working, loved the southern Appalachian wildflowers and had an easy, wonderful laugh.

I was lucky he had come at all. He’d asked the Dutch designer Piet Oudolf where he’d recommend that Lambert go in the United States. (Lambert had worked for Oudolf on weekends and school holidays from the early 1980s into the early 1990s.) Oudolf gave him some names. Lambèrt wrote to several nurseries, and I was the only one to respond.

Lambèrt was dealt a good hand during his year in North Carolina. On weekends he drove up and down the Blue Ridge Parkway in his humongous hearse, stumbling across exciting, unfamiliar plants in the North Carolina woodlands. Then, on a visit he made to visit his aunt and uncle in British Columbia, Lambert also met the love of his life, Marjanne van Lieshout. Marjanne and Lambèrt immediately had much in common. 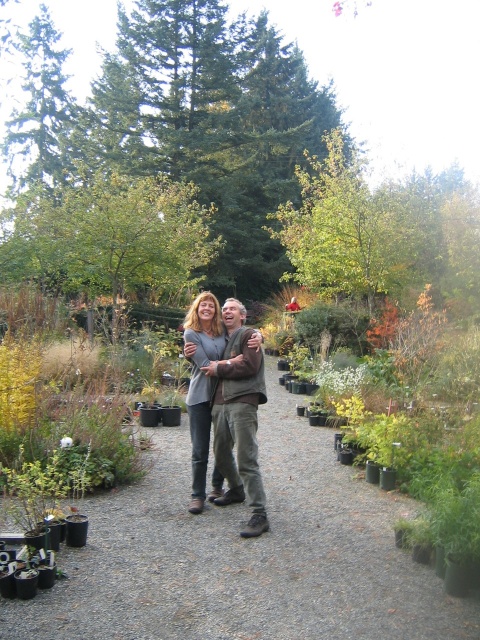 Marjanne had gone garden pro at the age of 14, when she began creating designs, for her uncle who had a landscape firm in Eindhoven, Holland. She drifted away from gardens for awhile, studying ceramics and working as a medical office manager. But the workaday tedium bored her. She started reading books and magazines that featured garden designers: John Brookes, Oehme and van Sweden, Robert Murase, Peter Walker and Kathryn Gustavson. And then fate intervened. Marjanne and Lambèrt fell in love. The Vrijmoeds’ partnership—enduring love and garden making—has bloomed ever since, for nearly 20 years.

I visit nurseries and gardens as often as I can. It’s rare that I have two days to savor my favorite ones. I was the pampered houseguest of the Vrijmoeds, in Langley, B.C., for two days last summer before the 2013 Vancouver Perennial Plant Association symposium.  Attendees stopped for a much too short one-half gallop around the place, on a bus tour later in the week. 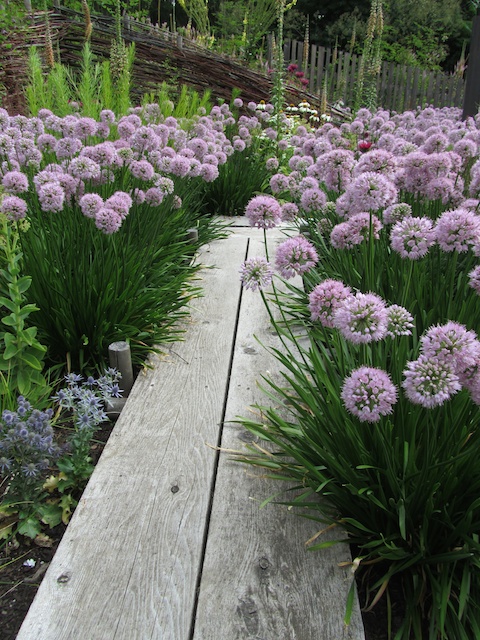 Great Dixter and Beth Chatto’s nurseries and garden in the United Kingdom can hold my attention for two days. So, I imagine, could Oudolf’s and also those of two other Dutch nursery colleagues—Coen Jansen’s and Hans Kramer’s.  The original Heronswood in Kingston, Washington, could do that, too. And Plant Delights in Raleigh, North Carolina, astounds me every time I visit.  These nurseries and gardens need to be circled a few times in slow motion.

Free Spirit Nursery is smaller and more intimate than these others. The beautifully laid-out retail area encompasses little more than 8,600 square feet (800 sq. meters). There are over 1,200 plants in an ever-changing nursery inventory. Anemone, species, Clematis, Epimediums (and other herbaceous Berberidaceae), Helleborus, Sanguisorba and Thalictrum are some of their favorites. No insecticides or pesticides are used, and weeds are removed by hand or with a Dutch push hoe. 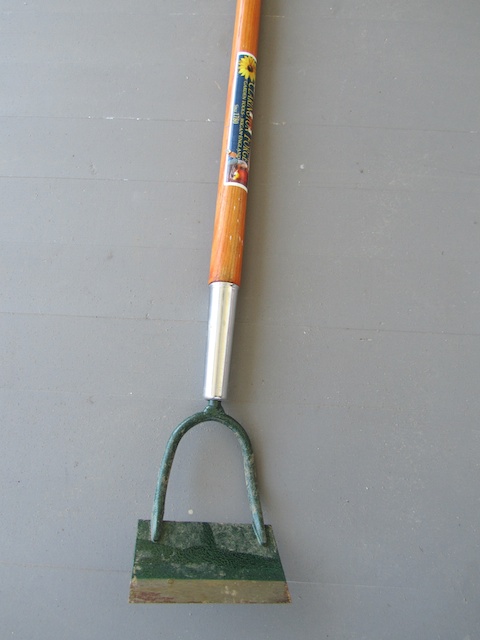 Woodland plants are their specialty, and perennials like epimediums,  Oxalis oregana cultivars and the western sword fern Polystichum munitum can compete with the roots of Douglas firs and western red cedars during dry summers.  They also have sun plants, and their favorites include: Amsonia hubrichtiii, Digitalis parviflora, Laserpitium siler, Salvia ‘Caradonna’, Scutellaria incana and Molinia caerulea ssp caerulea.

Piet Oudolf and the designer Phillipe Starck inspired the Vrijmoeds’ garden and design business. From Starck, Marjanne learned, “Nature and every living thing has a function. There are no superfluous parts. Lots of things we don’t understand, but it all has function. Phillipe meant that the design is not going to be built only for the comfort of us, but for the comfort of nature… We have a naturalistic approach to everything. We do make mistakes, but we try to think of nature first, then design.”

There are other subtle influences from the German-born American painter Wolf Kahn and the letters from Vincent van Gogh to his brother Theo. Marjanne admits, “The letters are my best lessons on color and light and how they affect each other.”

But it is Oudolf, their close friend, whom they consider the “greatest plant artist.” Oudolf, Marjanne explained, “…focuses on complex plant communities as a whole, at a very readable level for everyone. Visitors to Piet’s gardens might not realize the complexity, but know it’s something special.”

The Vrijmoeds’ garden, surrounding their home, in Langley, sits on ¾ acre (.30 hectare) of acidic, sandy and gravelly soil that has been amended, where need be, with lots of compost.  A walk around the garden is like a tour through a carnival House of Mirrors. No view is the same as the next. There is nothing deceptive or scary, but there are fun surprises—topiaries, a sunken garden, bridges, benches, rock walls and a pond. 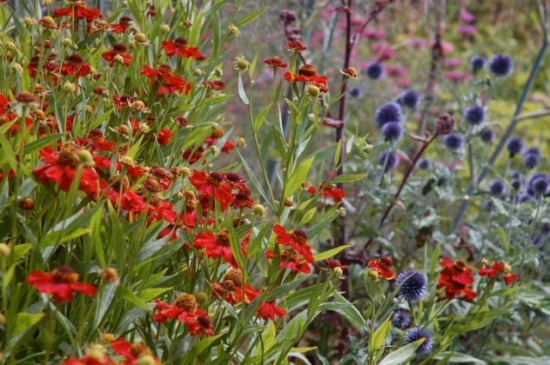 Every turn has something new and exhilarating—a new reaction. Lambèrt laughed and said, “We take the fluff out of it.”  Marjanne laughed, too.  She adds, “We are stepping up design beyond the little pillows on the couch and new color schemes and gadgetry.” Their naturalistic plantings take a cue from the wilds of the Pacific Northwest—from Bellingham, Washington, to Squamish, from Vancouver Island, east into the Fraser Valley.

“We want something different.” Marjanne says. “We want to gather and hunt because that’s how we go on. It’s part of our DNA. Hold back, officiate and listen to the silence.”