Weeds of Affection and Perpetual Annoyance 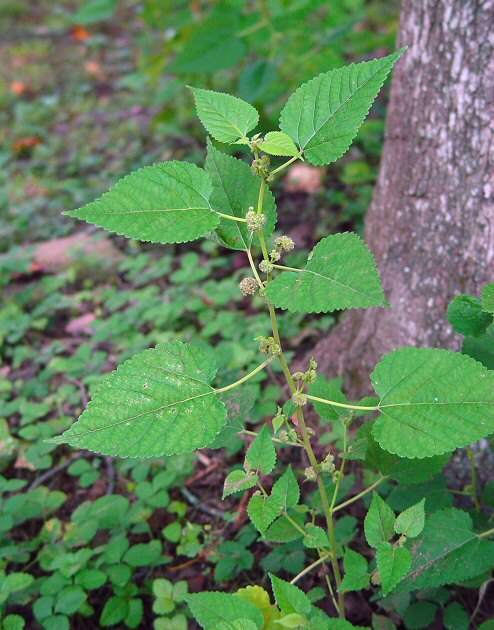 “Weeds are flowers, too, once you get to know them.” –Eeyore

Mulberry weed is an unwelcome guest that I can’t shake loose. The trouble is: the Mulberry weed doesn’t travel alone. I’d like to get rid of them all, but there is no end to mulberry weed. In a prodigious year for weeds in Kentucky, I fear Fatoua villosa is winning the war.

The rogue showed up in our garden several years ago and never takes a day off from May until frost. It is usually easy to spot, growing upright to a foot or more, but there are wayward progeny with procumbent growth, creeping low-slung, in the semi-shade. These are the hardest to nab. This mulberry tree relative has dull, barely distinguishable flowers that produce mature seeds in the blink of an eye.  A gazillion seeds give or take can be catapulted across two time zones.

Other notable weeds of my spring and summer garden are bush honeysuckle and porcelain berry, but there are some native scoundrels as well. Make no mistake: pokeweed, American elm, hackberry, and redbud are chronic offenders, too.  Not vicious by any measure, nor thuggish like bush honeysuckle and porcelain berry, they are nonetheless constant reminders that you can’t easily control natural forces.

No one but a Libertarian cynic could defend Asian bush honeysuckle. It leafs out a week or two before anything else and chokes out spring ephemeral wildflowers that rely on a few weeks of direct sun for survival before the native Kentucky tree canopy unfurls in mid to late April.

The porcelain berry can run rampant at the edge of woods and strangles anything in its way.  It tends to sneak into our garden unnoticed, until the woody vine begins working its way through trees and bushes, into sunlight and direct view. 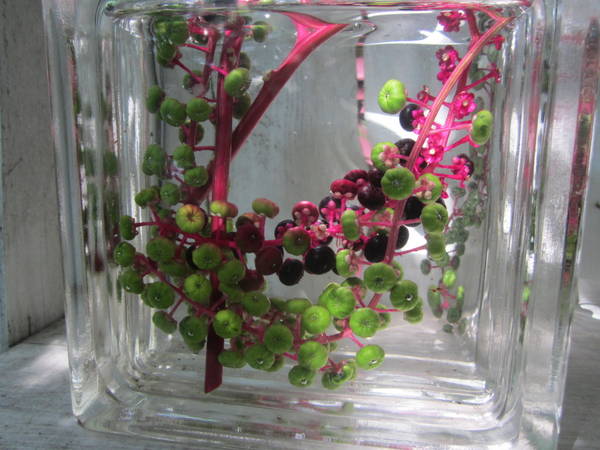 I have a soft spot for pokeweed, though I try not to enable ripening seeds.  Regardless, birds will drop ammo into the garden. Pokeweed is a tall perennial, with deep roots, and lovely white blooms that produce dark purple seeds. Occasionally, I will see a plant with dark magenta stems. Ink can be produced from the seeds for natural dye. Polish meat packers sometimes use pokeweed ink for meat stamps. The leaves can be cooked in very early spring, but you’d better get the timing spot on, or else risk a nasty poisoning. I’m taking a pass on poke salad. On the other hand, I can recommend a pokeweed arrangement with stems, leaves and berries. Mary Vaananen, a very talented garden artist and my Jelitto Perennial Seeds colleague, made the lovely discovery while weeding her garden last weekend.

Last year I noticed a large, healthy American elm specimen two doors down the street. I’d been pulling elm seedlings for 18 years and hadn’t, until then, been able to figure out the seed source. I marked a few seedlings this year for replanting on our farm in nearby Salvisa. Maybe one, like its parent, will prove resistant to Dutch elm disease. 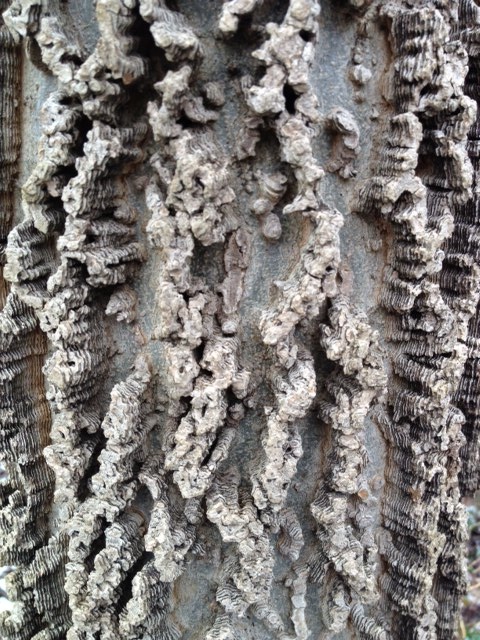 The common hackberry, a durable elm relative, falls into the “special needs” category.  One lone hackberry, the mother of many, stands on the corner of our lot. It always looks like it’s at death’s door. How can I love a tree whose foliage is always chlorotic and disfigured with leaf nipple gall? On the other hand, hackberries can’t be killed and the deeply fissured bark is beautiful.

You wouldn’t think redbuds would be a nuisance, but our garden is carpet-bombed with seeds every year. Redbuds have deep, nitrogen-fixing roots that are impossible to pull unless you get to them in April or early May.

A lovely variegated seedling popped up in the back garden, down near the alley, about eight years ago. I didn’t pay too much attention to it until Mike Hayman, a local tree activist, came for a visit, and thought it was worth propagating. Soon everyone was growing excited and encouraging me to patent it.  I briefly imagined an endless stream of fat royalty checks.

But, there were as an ethical hitch. You can’t patent a plant that is a “product of nature.” The patent advocates argued that the variegated redbud was found in my garden, not in nature.  I didn’t lift a finger to put it there. It was either heaven sent or a bird dropped it (I suspect the latter).  That sounds like a “product of nature” to me.  (Note for you sneaky opportunists: How would the patent office know the difference?)

A “product of nature” prohibition hasn’t stopped the stampede for patenting human DNA, although the Supreme Court recently weighed in on hoarding the genome. 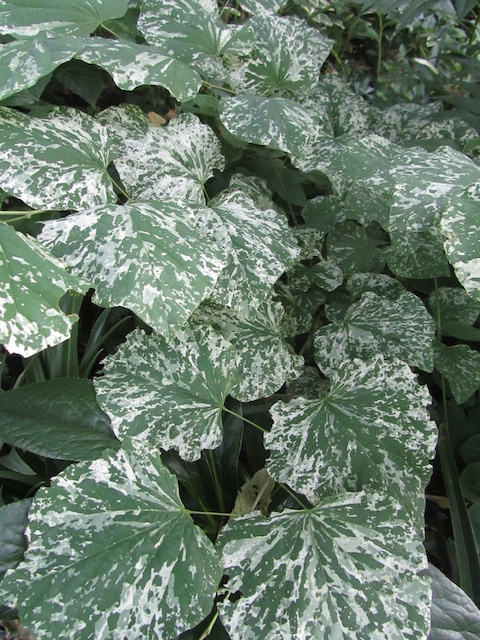 I didn’t patent the redbud.  I try not to ignore a gift. I passed our gift of Cercis canadensis ‘Alley Cat’ along to Mike Hayman and, in turn, the brilliant father and son propagators—Harald and Alex Neubauer of Hidden Hollow Nursery in middle Tennessee. Hayman took scion wood to the Neubauers, and they budded it onto seedling understock. The variegated redbud was freed from the dark end of the alley. Now others can enjoy it. And the gift keeps on giving. Alex Neubauer returned the favor two weeks ago with a six-pack of Alley Cat beer.

Meanwhile, the mulberry weed has traveled around town faster than bird flu virus. It’s coming to your garden, whether you like it or not. The weed is growing abundantly in the gravel of the shady portions of the courtyard at the Grape Leaf restaurant on Frankfort Avenue and seems just as happy on limestone ledges in Cherokee Park.

We had a few lovely, cool days in mid-August. I went on patrol on hands and knees. I am the lone hawk on weed watch.  I was in a quiet world one morning, in the shade of a swamp white oak, pulling weeds, hidden in a tall patch of Rudbeckia subtomentosa ‘Henry Eilers’. My solitude was shattered without warning. A once kingly hosta was cut in half.

I knew right away that mulberry weed was not my most menacing threat.

Deer have taken roost on our city street.