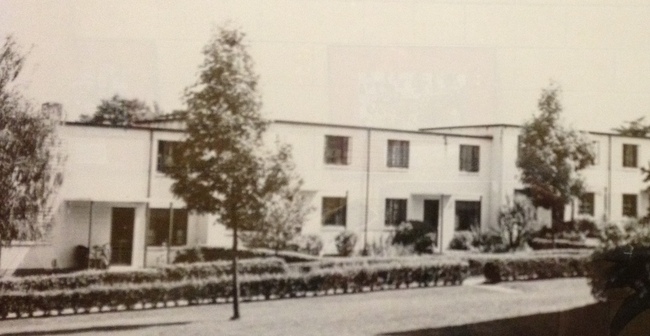 When the planned community of Greenbelt was created in the ’30s, the landscape plan consisted of trees on their way to grandeur (mostly oaks) and hedges, like the ones in the old photo above.  The shrubs used were and still are euonymus and privet, of which the euonymus are doing pretty well and  the privet, not at all, as you can see from the recent photo below.

Yet, hedges are still encouraged here because, to quote the co-op rules, they’re “a hallmark” of the town and though fences have been erected since the rules were changed to allow pets, “Hedges are still the preferred fencing in our community because they help preserve our historical legacy. Well-maintained hedges are a beautiful community asset.”

And of course there are rules about hedges (because we’re chockful of rules here): “Hedges should be kept in a neat and uniform appearance at all times.”  The rules also state that they can’t be taller than 42 inches, though that rule isn’t enforced, thanks to residents complaining about the lack of privacy.  (Hear, hear!)

So with hedges all around me, I’m suddenly interested in them as a landscape feature, and of course discovered that their purpose is to enclose fields to keep the livestock in.  Also, I learned that a “hedgerow” is a hedge that’s of “sufficient age to incorporate larger trees,” according to Wikipedia.  More tidbits:  There’s evidence that hedges have been used for this purpose since at least 4000 B.C., and many hedgerows in the U.K., Ireland and The Netherlands are estimated to have been in existence for over 700 years, originating in the medieval period.  Now that’s some historical legacy.

So it’s no surprise that hedges have been legislated over in hedge-filled countries, allowing for their removal when farm sizes were increasing and more recently, their replanting for the benefit of wildlife.  Hedge height is subject to law in the U.K., specifically the Anti-Social Behaviour Act 2003.  (Seriously.)  For a hedge to qualify as anti-social it must be made up of a line of two or more evergreen or semi-evergreen trees or shrubs, over 2 meters high, and be a barrier to light or access.

Judging from the tallest hedges in my neighborhood, towering walls of Arborvitae or bamboo (which was once encouraged and is now verboten) I have to agree that tall hedges seem pretty anti-social.

So I have to ask:  In small townhouse-sized yards, with no livestock in sight, what’s the purpose of hedges, anyway?  The short ones offer no privacy and the tall ones are anti-social.  Hedges don’t keep dogs in the yard.  And oh, they’re high-maintenance!  Remember they must be “neat and uniform in appearance at all times,” which no amount of shearing will achieve when the occasional shrub in a hedges dies for some reason, which happens with some regularity.

That brings us to a far better kind of hedge, practically and aesthetically – a tapestry of plants, rather than that uniform row of supposed perfection.  A mix of species, heights and widths.  In other words, a border.  Then it look like a garden, not a miniature English manor.

Though in a large, grand garden with a whole staff to maintain it, hedges sure can be nice.  I love this one at Ladew Topiary Gardens. 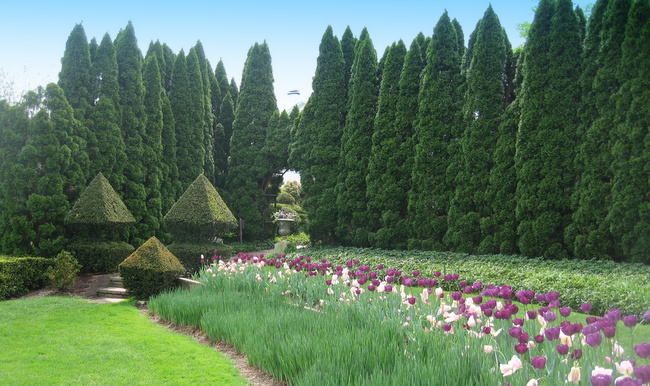