You don’t have to be a gardener or a even Democrat to love Michelle Obama’s first book – American Grown, the Story of the White House Kitchen Garden and Gardens Across American – like I do.  Cari 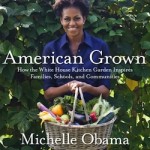 ng about the health of our kids and of the land helps, though. American Grown isn’t so much about gardening; it’s a warm and accessible guide to everything the author is trying to change about our unhealthy lifestyles.

The first thing you’ll notice about the book is that it’s a team effort, with short chapters by White House gardeners and cooks, who are also given full bios, multiple photos and lavish praise.  So we hear from top horticulturist Jim Adams about getting started growing food and composting, and about engaging kids in the garden.  Top chef Chris Comerford tells us how the garden has changed the way she cooks, and offers recipes from the garden, by season.  (For lots more White House recipes, see the sidebar of the definitive source for all things food at the Obama White House – Obama Foodorama.)

The book generously features outstanding community and school gardens from across the country, as well as farmers markets, Will Allen’s Growing Power, and more. For full details about what’s in the book I’ll send readers to this blog post.  Now thanks to that blogger’s thoroughness, I can highlight some juicy tidbits.

What Nosy Followers of the White House Garden Want to Know

Remember the silly contest to nominate the White House Gardener? The one that was never sanctioned or even acknowledged by the White House?  Turns out that in addition to hiring local favorite Jim Adams, an experienced organic farmer was relied upon in a consulting capacity.  That farmer is Jim Crawford of New Morning Farm in Pennsylvania, who sells his produce at DC farmers markets.  Crawford abandoned law school to return to the land as a hippie farmer, back in the day.

The campaign to petition the Obamas to start a kitchen garden was utterly superfluous, since Mrs. O started dreaming of a White House garden during the primaries – remember them?  And she started implementing the idea soon after the election.  (Indeed I received my exciting call from her assistant about the garden in mid-November.)

The President was not a big fan of the White House beehive, especially because it’s so close to his basketball court.  Also not a big fan (I’m assuming) are the Secret Service agents, since the big “bee caper” when they swarmed and parked themselves near a visitor entrance.   While the Secret Service and visitors took shelter in the guard booth, the beekeeper was summoned to catch the hive.  (How do they do that?)

Guess who we see lots of the book:  the First Lady, lots of school kids, and Bo, the photogenic First Dog.  Who’s entirely missing?  Sasha and Malia.  The book doesn’t say why, but in interviews Mrs. O has revealed that the girls have NO interest in gardening.  Oh, well.

There’s a Faux Twitter feed for the book, plus a faux website! Once again, Obama Foodorama has the story.

The politicization of everything about the White House grounds is nothing new.   When Eleanor Roosevelt first proposed a “victory garden” on the grounds to promote home gardening, the USDA opposed it, saying it would be seen as a challenge to American farmers.  Good lord.

Personal stories about the author’s childhood, and especially the yellowed photos from those days. 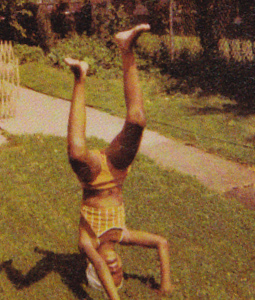 First Lady of the United States

A letter from an elementary student who helped with the White House garden is posted in full, and this is how it ends:  “I think about the garden project as a model for being gentle:  gentle with your body, and gentle with each other.”  Lovely!

Mistakes were made and are revealed!  Beds were too wide, the ornamentals took up too much space, the first cantaloupes looked perfect but had no taste, the birds ate all the blueberries, cutworms and cucumber beetles also took their toll, and some vegetables were planted too late in last year’s hot-hot summer.  After the first year, bermed beds were replaced by beds enclosed with wood.  So regular mistake-making gardeners (all of us) can take heart.

Volunteer gardeners, especially children, can be challenging – and destructive.  So when the Bancroft Elementary kids visit to “work” in the garden, the event is expertly planned and all goes well.  But with adult volunteers, ya never know.  Seems there are lots of them working in the garden – all staffers in the White House, who turn out in droves every Tuesday morning.  Sam Kass (chef and Let’s Move coordinator) recounts one day noticing the fig tree wasn’t where it was supposed to be.  He looked all over and finally found it on the compost pile, where a “well-meaning” volunteer had dismissed it as a weed!

American Grown is available on CD and as a digital download, featuring an introduction and selected passages narrated by the First Lady herself, as well as a full cast.

Proceeds from the sale of the book go to the National Park Foundation, the official charity of America’s national parks, with the funds to be used for programs that promote gardening and healthy eating and give young people the opportunity to experience the outdoors and lead more active lives, as well as for the continued care of the White House Kitchen Garden.

Check out the gardening guide that’s part of the Let’s Move campaign.

For locals, here’s how to get a signed copy of the book, and maybe have the chance attend an event with the author.