What I Learned from The New American Landscape 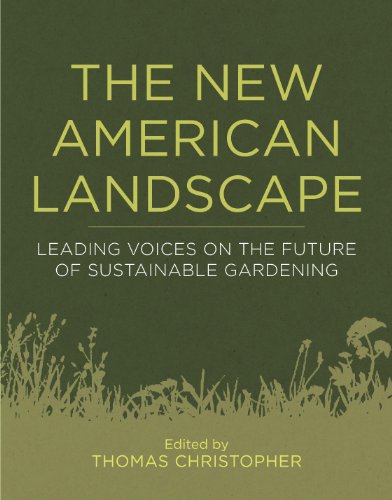 I must have read every book ever published about “sustainable gardening” – surely there aren’t any more of them! – but still I was eager to read the latest on the subject from Timber Press because the contributors are the undisputed experts on their subjects, from soils and water conservation to native plants and permaculture.  Indeed the book’s subtitle, “Leading voices on the future of sustainable gardening,” is no idle boast.

So despite my imagined overexposure to this topic, I found plenty of interesting tidbits in The New American Landscape, including the following.

Pest and pesticide experts David Deardorff and Kathryn Wadsworth boldly state what’s so often said whispered about the horticultural advice given by universities – that it’s often tainted by the source of their funding – the chemical companies.

Permaculture advocate Eric Toensmeier isn’t entirely happy with the Sustainable Sites Initiative requirements for LEED-like certification for landscapes because they give no credit for growing edibles.  He goes on to make an impressive case for food-growing even in the desert, showing off a Tucson garden that supplies 10-25 percent of the owner’s food using rainwater, greywater and runoff only.

Doug Tallamy explains that insects are more important than seeds and berries for sustaining birds, writing that “Ninety-six percent of terrestrial birds in North America rear their young on insects….When they are reproducing, birds need the high-quality protein and energy-rich fat bodies produced by insects to succeed.”  (Tallamy also disproves two opposing myths about native plants, as I reported here earlier.)

Richard Darke defines “sustainable gardens” as “those that consume the fewest resources,” which makes so much sense I wonder why that definition isn’t universally accepted.  Then he jumps into the hottest topic in gardening with his take on invasive plants: “I am not comfortable with the term ‘invasive’… So-called invasive plants wouldn’t exist unless they were better adapted to current conditions than so-called native species.” Darke grows a mix of natives and nonnatives but declares that “None of the plants I grow require watering beyond initial establishment, fertilizing, or pesticides.”  He’s my kind of gardener.

Meadows expert John Greenlee, when describing the yearly cutting back required by meadows and natural lawns, recommends doing the job with a “groundcover mower or a weed eater with a blade.”  What the heck are they and where can I buy them?

Reliable predictions are that by 2013, 36 U.S. states will have chronic water shortages, so “waterwise gardening” isn’t just for the arid West anymore.  Tom Christopher reminds us that 30 percent of residential water use goes to the landscape, mostly to lawns that could and should be allowed to go dormant in the summer.  Dormancy isn’t a sign of impending death; it’s the state of “suspended animation” that keeps turfgrasses alive through weeks of summer weather.

Christopher also points out a gaping omission in the USDA’s growing zones – they reflect winter temperatures only and ignore amounts of rainfall.  “The USDA map classifies Naples, FL as identical with Victorville, CA, even though Naples receives 51.9 inches of precipitation annually while Victorville gets less than 7.”

Christopher’s caveat about the use of mulch surprises me, though.  “In the short term, an organic mulch will reduce soil fertility because it will absorb nitrates (a major plant nutrient) from the soil as it decomposes.  For this reason, the application of such a mulch will probably increase your plants’ need for fertilization in the short term.”  Can that be true of all organic mulches, not just hard wood?

About soil science and the details of permaculture, I found a lot here that was new to me but frankly, grasped close to none of it.  My bad, I’m sure.

THE GIVE-AWAY
Just leave a comment and I’ll choose one at random to win a copy.  Entries close tomorrow at midnight  Eastern time.