Review: “Weeds: In Defense of Nature’s Most Unloved Plants” 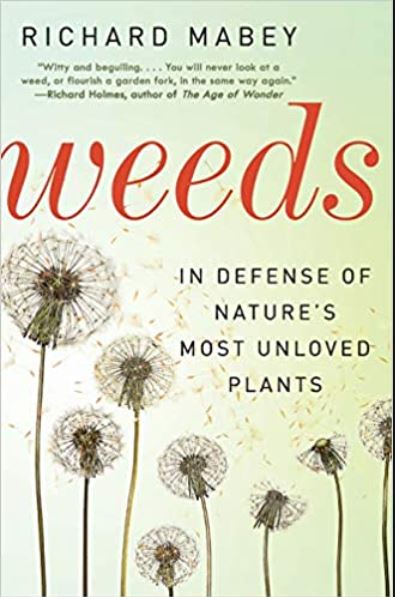 How you define weeds is intrinsically connected to how you define gardening. For someone whose garden consists of little more than a front lawn, a back lawn, and maybe a shrubbery surrounding the house, a weed could be anything higher than grass level that does not flower. For example, a perennial garden I helped install on behalf of my neighborhood association consisted of—among other plants—epimedium, brunnera, daylilies (hemerocallis), Russian sage (perovskia), and flowering bulbs. The owner of the empty lot that contained our garden saw it at a time when none of these were in flower and immediately sent for a bulldozer to have all the raised beds torn down. His explanation? “It looked like weeds.”

I have also been with non-gardeners on garden tours who thought a lot of what we were praising “looked like weeds.” In the City of Buffalo, homeowners can be cited by neighbors for “high weeds” that may in fact be perennials, sunflowers, shrubs, or tomato plants. Whether a fine is actually levied depends on what definition of weeds the city inspector uses.

On the other end of the spectrum, there are truly horrific situations like the kudzu that now covers 2 million acres of forest land in the American South, the Japanese knotweed that forms immense, smothering thickets in the UK, and the prickly pear cactus that is considered the most widespread weed on earth, and once covered 25 million acres in Australia. I recently read about all these scary weed infestations and much more in Richard Mabey’s delightful new natural history title, Weeds: In Defense of Nature’s Most Unloved Plants.

I’ve been dipping into this book much in the same way I weed my garden—browsing around, noticing certain things, and choosing to ignore others.  It seems to me that Mabey is sharing his fascination with how weeds survive, thrive, and revive throughout the world rather than defending them. It is a fascination with which I have great empathy. One of my favorite and most optimistic gardening strategies consists of allowing strange plants to grow to maturity in the hopes that they might be desirable additions to the garden, rather than—as they inevitably become—lanky invaders with miniscule, unattractive flowers and spiny foliage.

Like me, Mabey eschews the “take no prisoners” attitude that wants to eradicate alien invaders in the landscape. He points to plants like the horse-chestnut and snowdrop; both are cherished to nearly fanatical degrees in the UK., and both are aliens from other continents (though the snowdrop was introduced centuries ago).  Mabey also notes that “there are invasive species which ought never to get their naturalization papers,” but the purpose of his book is not to discuss weed control. Rather, he reveals fascinating moments in the social history of weeds, and our relationship with them.

It was by no means surprising that the British naturalist looks to Buffalo, NY for one of the most famous disagreements over what makes a weed.  As Michael Pollan did before him in Second Nature, Mabey retells the story of Stephen Kenney, a University at Buffalo grad student who attempted to grow a wildflower garden in his front yard during the 1980s. After enduring a trial, an appeal, gunshots, an attempt by neighbors to infest the garden with snakes, and, finally, the illegal mowing of his front yard, Kenney moved to Pennsylvania, where he finished his doctorate on Thoreau. (He now teaches at a small college in northern New York, and owns 10 acres where he grows vegetables and raises chickens and ducks.)

The most poignant intersection of weeds and history is told in Mabey’s chapter on the role of poppies during WWI.  In the wake of the bloody devastation wrought upon the farmlands of northern France, wildflowers flourished, most notoriously the poppy. As writer William Orpen said in 1919:  “Red poppies … stretched for miles and miles. … It was like an enchanted land, but in the place of faeries, there were thousands of little white crosses, marked Unknown British Soldier.”

Mabey does not ask us to grow or even tolerate such plants as burdock, nightshade, nettles, thistles, or docks—but his book is an important opportunity to understand how and why we share their world.