Life-Changing Gardening Partnership in Writing “From Seed to Skillet” 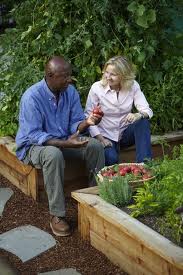 by Jimmy Williams and Susan Heeger
Garden Rant is a unlikely partnership that has made my life infinitely more fun. Here is another great gardening-based partnership: writer Susan Heeger, a contributing editor for Coastal Living and Martha Stewart Living, and city farmer Jimmy Williams.  Their book From Seed to Skillet has just been published by Chronicle…Michele

When I met Los Angeles urban farmer Jimmy Williams, I was a bit surprised by his experimental zeal. Having come to his garden to interview him for the LA Times magazine, I crouched with him on his garage roof, hemmed in by potted seed starts, and peered queasily down on a crazy quilt of beds and salvaged bricks, nothing matching, no logic. Instead of the farm-style order I expected from one who grew seedlings for a living, I spotted mandolin-sized squash dangling from vines on the back of a shed; another wall was swallowed by tomatoes. There was no real plan that I could see, just an endless testing of hypotheses that produced the sweetest peas I’ve ever tasted.

He had a story, too—and what a story. Raised in a family of 12 kids in eastern Long Island, NY, he’d been taught to garden—they all had—by his stern-sweet paternal grandma, a descendant of Caribbean slaves, a foot-stomping Baptist. Besides instructing them on making compost, starting seedlings, planting beds and fighting pests, Grandma Eloise (or ‘Weezy,’ as they called her behind her back) schooled the Williamses in self-reliance, self-respect and family pride. Their great-great grandmother had carried the seeds of a great tomato, dubbed ‘Goosecreek,’ to South Carolina on a slave ship in her apron pocket. The family still grew that tomato, still saved and replanted its seeds and the children all learned how to cook it, thanks to Eloise and Jimmy’s mother Gertrude–who was part Shinnecock Indian–into traditional South Carolina Gullah and Native American dishes.

Of all the young Williamses, Jimmy particularly took to gardening, and kept at it after he grew up and started working as a New York clothing designer. Eventually, after he moved to California to get married, bringing some of Weezy’s seeds with him, it literally overran his life, and the tiny lot around his first Los Angeles house. He grew the seeds into seedlings, planted them out, saved more seed, began selling plants and in 1997, leaving fashion behind, he officially launched HayGround Organic Gardening.

When I met him, he was selling mail-order seedlings and starting to design gardens. His enthusiasms were wide-ranging and infectious. As I toured his pint-size farm, we had to stop every few feet for a story: Here was a giant Belgian tomato—“so sweet,” he told me, “that Europeans make wine from it;’ and there was a collard-green tree–“My family grew these, but you can find lots in black neighborhoods around the country.” He pointed out spicy leaves used in Latin cuisine for wrapping fish, and hot peppers that could ease the pain of arthritis.

I asked about his methods, and he showed me how he was trying a dense planting of tomatoes, training them up a wall with electrical cord. He demonstrated a simple compost tea (“Half-fill a bucket with finished compost, top it up with water, set it in sun till it begins to smell, strain it, dilute it with five parts water and spray it on plant leaves—for stronger plants, fewer pests, sweeter fruit”). Then, there were things he wouldn’t reveal: his secret soil amendments; his ways of speeding germination.

He sent me home with seedlings and a family recipe for sweet-pepper dip. As I left, I said, “You should really write a book.”

He smiled. “I’ve been thinking that for ages.”

In the years since, we’ve had hundreds of conversations. As I’ve written more articles on him, I’ve learned how much the flat-out mystery of nature gets him going–the revelations that come with trying this and that amid the vagaries of a garden. Just watching him operate boosts my faith in experiments, of pursuing passions and enthusiasms.

In our own vegetable garden–which my husband Rob and I started several years ago, partly inspired by our friend Jimmy—we’ve grown foods we never ate much before we grew them: Russian kale, fava beans, white eggplant. We’ve learned a lot about cultivation from him, tried his plants, given him some of ours. And with him, we’ve watched interest in home-growing build gratifyingly across the country.

One day, after I’d seen a high-profile article another writer had done on Jimmy, I got a call from him. Remember that little book talk we’d had so long ago? Was I interested in pursuing? Because agents had started calling.

Well, I asked, was he ready to spill his secrets?

He was. We did. Captured much of our decade-long conversation in a book that takes off from Jimmy’s life, his grandmother’s teachings, his belief in the powerful thrill of self-sufficiency that comes from growing food. There too is the sense that gardening builds community and affection among people from different places, with different traditions, who find it comfortable to sit down at the table with other gardeners, other cooks, others who cherish a satisfaction Jimmy calls “fundamental to our nature.

“Growing food is natural,” he concludes. “Our ancestors did it. It’s not difficult or complicated. It all starts with a seed. And without seeds, after all, we wouldn’t be here.”