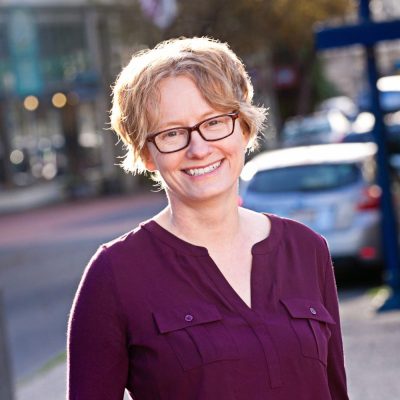 From the GardenRant Archives This post from 2011 seems to foreshadow Anne Wareham joining GardenRant this year. In it, Amy described Anne "one of us.  She is opinionated, ill-tempered, witty, [...]

From the GardenRant Archives Originally published 1/21/09, the day after Obama's first inauguration. Teddy Roosevelt, the winner! Whatever may happen over the next months and years, this has [...]

Hi friends! Sorry I've been so very, very absent--if you're wondering why, it's because I wrote a novel called Girl Waits with Gun and that shit is time-consuming. It's coming out [...]

Talking with Elizabeth Gilbert about her Novel of Botanical Exploration

When I ran into Elizabeth Gilbert, author of the megahit Eat, Pray, Love and five other books, at a party earlier this year, she wanted to talk about only one [...]

Talking to Lau Hodges, Director of Operations, Conservatory of Flowers, about her Job

Please welcome Lau Hodges, the latest victim of our all-too-infrequent series, Get a Job. What do you do for a living? I have the greatest job ever! I am [...]

We here at GardenRant World Headquarters have not had much luck with gardening apps so far.  They seemed so bright and shiny and new and full of promise at first, [...]

My Cocktail Garden: All Done!

Following up on last week's post about the construction of this here cocktail garden, I've got a few more pictures to share, along with some lessons learned. But first, this [...]

My Cocktail Garden in Sunset Mag!

So! Sunset magazine stopped by a few months ago. It was great fun hanging out with a couple of pros all day and watching them work. (Oh, and there was [...]

Talking to Chad Smiley, Landscaping Foreman, about his Job

Please welcome Chad Smiley to the latest in our Get a Job series, in which we explore the many strange and wonderful careers in horticulture. Chad works for Friend of [...]

Talking to Sharon Stolen, Master Gardener Goddess, about her Job

Next up in our semi-regular Get a Job series is Sharon Stolen, coordinator of the Master Gardener program and all-round incredible resource for all things horticultural in southern California. She's [...]

Talking to Anne Lerch, Vintner, about her Job

Next up in our semi-irregular 'Get a Job' series:  GardenRant reader and winemaker, Anne Lerch of Hood River Vineyards. What do you do for a living? My husband and I [...]

Thanks once again to my Hollywood brother for this one, who actually managed to cast an actor to do most of the heavy lifting.