Practicing tossing the hoop in the open area just outside my yard.

You know, I’ve been garden-blogging a LONG time now – since 2005. Then in 2012 I started a local blog about the town I’d just moved to and a YouTube channel about it, with my videos covering gardens, band performances and festivals. Video-wise I’d call myself just a seasoned beginner, still, because I tried and failed at Final Cut Pro and its ilk. Too complicated! But I’m loving a $60 program called Movavi. My camera is an iPhone 11.

What’s NEW is that I just launched a venture that combines my love of blogging and my growing love of making videos with my life-long love of dancing – a topic I don’t believe has ever been touched on here at GardenRant. But now that we have a category called “Defiantly Uncategorical,” here we are!

What happened, as I recount in this first video, is discovering hooping (formerly known as hula hooping) at a local music festival last October, and I was instantly addicted. Unlike most of the addictions I’m familiar with (ahem), this one’s super-healthy and probably the most fun form of exercise I’ve ever tried (sorry but gardening isn’t much of a contender for that title).

So I started learning online and was invited to joined a street band as a dancer. Lots of people who saw me practicing asked know how they could learn to hoop, so I decided to tell the story and share my favorite tutorials and other tips on YouTube.  “Susan’s Hoop Dancing Journey” (14 subscribers so far!) qualifies as a vlog (video blog) because it tells a narrative, rather than just showing or teaching.

After this introductory video, the next dozen or so will demonstrate all the moves I learned or tried to learn in my first three months, with links in the YouTube description area to the tutorials I’m using. There’s SO MUCH online it’s hard to figure out what to do first, then next, and every day or every week, so I’ll be organizing it for other beginners, including older ones. Hooping is blessedly low-impact and low-risk for injuries.

My next video will cover waist-hooping, which so many people think is all there is to it and boy is that wrong!  Also, it’s not the easiest or most fun place to twirl a hoop, so the next video after that will feature a dozen or so extremely easy moves you can do right away and have fun dancing to.  I’m all for instant gratification and confidence-building, saving the really difficult moves for later – or never. Many of them don’t even look appealing to me.

Other videos will cover performances with my street band and I’ll cover the global hoop movement. which attracts fitness freaks, hippies, and even aging (former hippie) gardeners like me.

Don’t imagine for a second than the purpose of the vlog is JUST to help beginners succeed at hooping. Hell, no.

Oh yes, there is one! A hooper named Anah Hoopalicious Reichenbach is called the “mother of modern-day hooping” and  there’s a video about the impact of her hooping at outdoor festivals all over the West Coast starting in the ’90s.  Hooping quickly became a fixture at Burning Man Festivals and is big in New York City, where interestingly, there are many more men doing it than out West where it’s mostly women.  There’s also a movie about the movement, called “The Hooping Life.” Here’s the trailer. If you’re old enough, it may trigger memories of Woodstock.

Here’s a nice round-up of all the health benefits associated with hooping.

Coming this Season – Hooping in Gardens

See, back on topic! 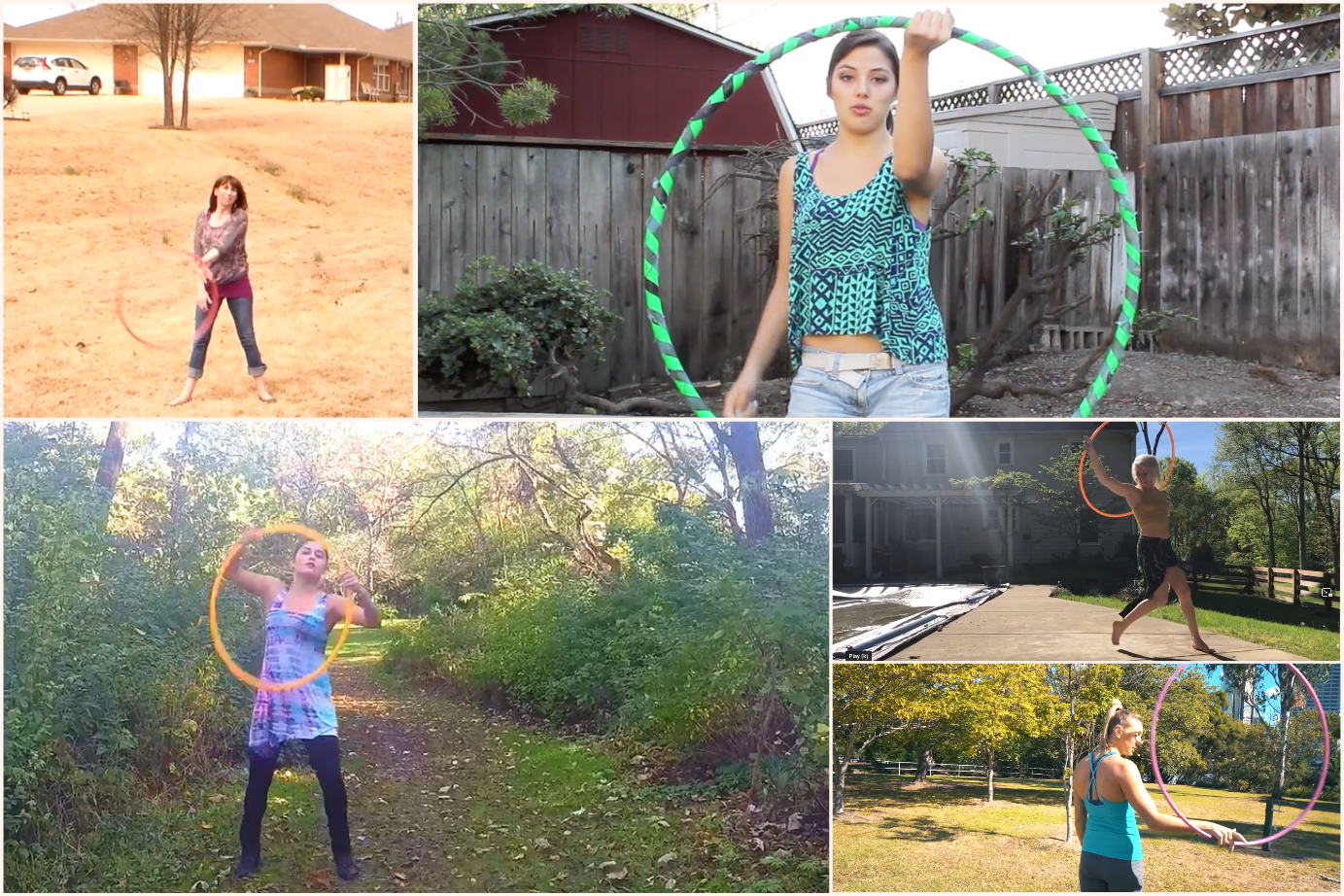 Hooping indoors has its limits, especially in small homes, so on YouTube you see examples of hoopers in parks, alongside swimming pools, in bare back yards and on dirt patches. 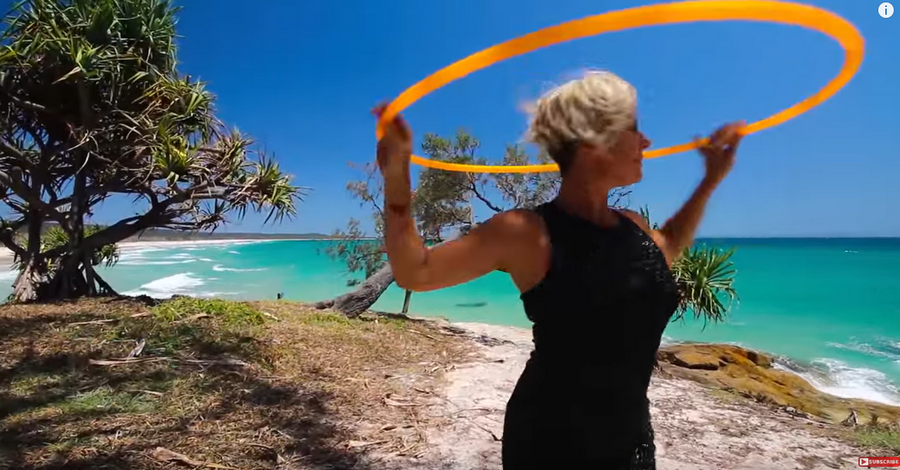 Only occasionally do you come across hoop videos in beautiful outdoor locations and wow, what a difference!  Deanne Love here performs somewhere on the Australian coast. (Her tutorials are filmed in a warehouse in Melbourne.) 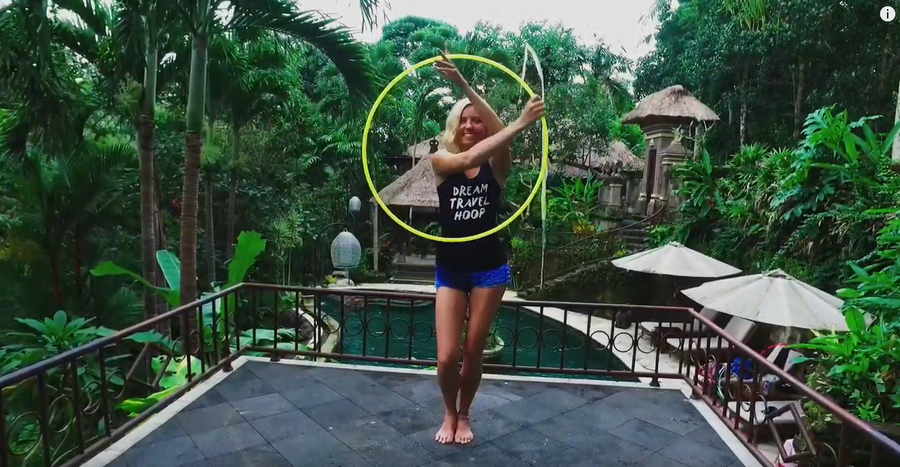 The Hula Hoop Institute puts on regular hoop retreats in BALI, of all places! (Not so far for hooping-mad Australians but way beyond my travel aspirations.) Participants have lots of gorgeous locations to choose from when showing off their new skills. 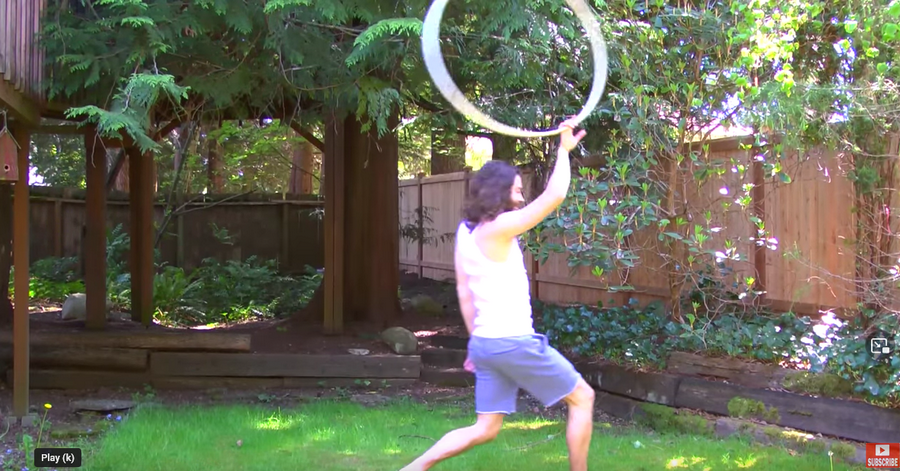 The only actual garden I’ve ever seen in a hoop video is this one somewhere in Seattle, with my second-favorite teacher, at Hoopsmiles.

But just you wait! One of my goals this year is to find lovely garden locations for videos – maybe in my own tiny space but especially in public gardens in the DC area (before they shoo me away for videoing without permission). The videos would pass muster with the topic police AND maybe inspire hooping and gardening at the same time!