Compromising on Compromise? Never!: A Letter from the Midwest

Oh how you described your December in your last letter. Basically, on your knees planting bulbs all day and writing apology emails every night. Eesh. How is it possible I didn’t get one of those emails? Despite such a heavy schedule, you did manage to find enough time to decorate for Christmas. Quite beautifully, I might add.

Michele and I spent most of December debating whether to decorate or not. In the end, we compromised. The banister got ribbon and lights but no garland. Our little artificial tree got pulled from its tub and plopped down on a table where it was strung with a couple strings of mismatched lights. There was further debate over whether to put ornaments on it or not. The question went undecided until the issue became moot. 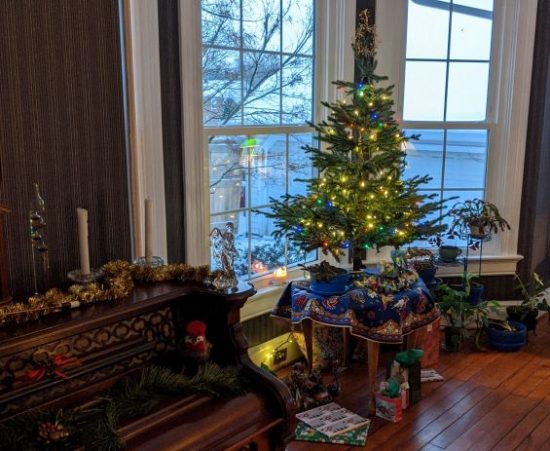 Such is life for this pair of empty nesters who work too hard and have no time—a seemingly unending series of compromises and non-decisions. Someone said life is messy. Proof of that is everywhere but no more so than here on Newtown Road.

A recent example of that is your fault. Your mentioning of the Brent & Becky’s sale, which I had heretofore remained oblivious to, prompted me to place a fairly large, late order of bulbs. A week later, a heavy box on the doorstep on a balmy afternoon. A week after that, predictions of a storm of the century so epic that scientists abandoned their typical, reserved, objective lexicon and went full flown, troubles-era Irish poet, throwing around terms like “bomb cyclone,” “explosive cyclogenesis,” “a weather bomb,” “bombogenesis,” and, most worrisome of all, “an explosive development.”

With a storm worthy of words like that, I had two urgent tasks. 1) Plant all those bulbs; and, 2) Get to the grocery for milk and eggs. Oh, and pray for my mortal soul. Three things. Those other two and also that.

Talk about a natural disaster! A “bomb cyclone” bearing down and just two days before Christmas, Pompeii had nothing on the Anderson Towne Center Kroger! Panic-stricken mobs, terror in their eyes, running amok, clearing store shelves of whatever was left with great, expansive sweeps of their forearms. Milk and eggs? Ha! Not a chance. After a couple of hours in the mosh pit slinging people by the hair and body checking old ladies, I found myself in a mile long line with a cart containing just five cans of sardines, two cans of peas, a can of something with no label, a tub of lard, and a scented candle. Best I could do. And, wouldn’t you know it, the old biker guy in front of me hands the cashier a motley wad of mostly expired coupons. A bombogenesis on the horizon and he’s arguing over coupons. After a lengthy period of spirited debate, the cashier just accepted them. Compromise.

The next day, which was still warm, I planted all those bulbs. Compromise? Oh, indeed. One of the best tools I’ve got is an old Echo, 2HP 2-cycle gasoline powered drill with a 2-inch auger. That thing digs holes with zest. It will churn out a hundred holes in no time. It will also twist your arm off and throw it into the neighbor’s yard if you haven’t got sufficient body mass and the side handle firmly braced against your leg. So, there I was, rushing around, randomly augering holes right and left and compromising like a son of a bitch. Little thought for siting. No memory for whatever poor, dormant plants I was augering into. Just get ‘em in the ground no matter what. Too deep. Too shallow. Too close together. Too far apart. Screw it. They’re bulbs. Both inexpensive and resilient. 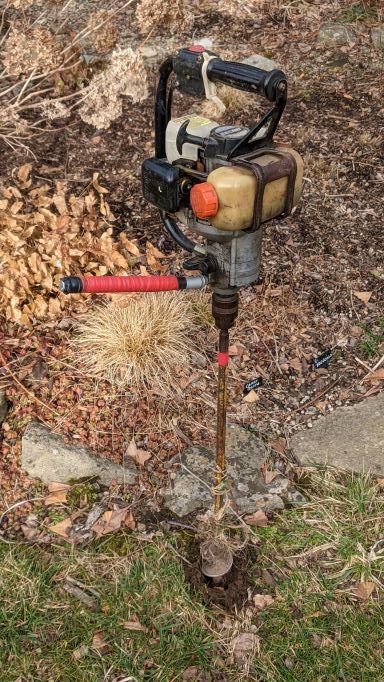 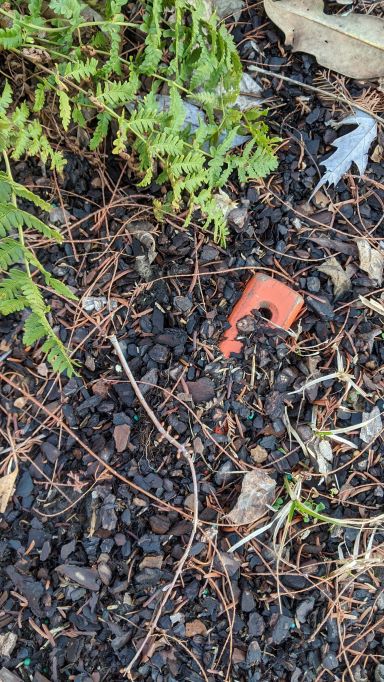 My auger rig above and why I paint all my tool handles orange below. My Japanese digging knife that went rogue while planting bulbs reappeared today.

I had just four different kinds,  Anemone blanda, Ipheion, daffodils, and daylilies. It was dark when I finished. A day later, we fell from a beautifully balmy and way above average 48F at 9PM to -8F at 3AM. Gusts up to 50mph. Four inches of snow. 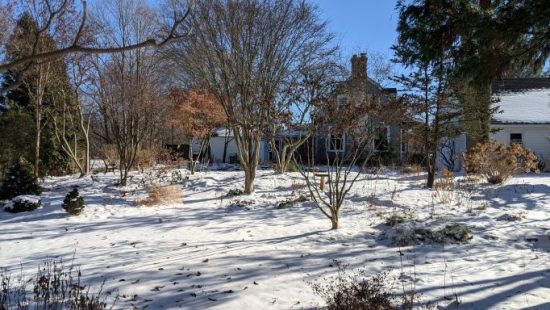 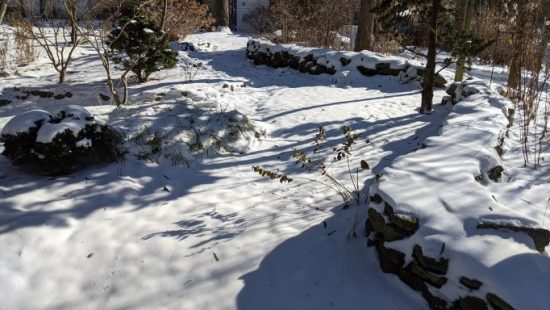 Christmas Day. The backyard after the bomb cyclone.

Despite their sudden and rude introduction to my Midwest garden, I’d put money down on every one of those bulbs coming through. They’ll be just fine in spring 2023 and better every year after that. Most garden plants are more resilient than we give them credit for and bulbs are among the toughest of the tough.

I’ve seen this at work too. Every fall, through all kinds of weather and assisted by all kinds of volunteers, we plant 100,000 tulips and a myriad of other bulbs at the Cincinnati Zoo & Botanical Garden. Few get planted as deep as suggested. The squirrels are watching from the trees, anxious to start foraging as soon as we’re finished. Tens of thousands of children will walk on them. Despite this and the volatility of Cincinnati winters and springs, the bulb display is routinely dazzling. Sometimes it’s earlier. Sometimes it’s later. But it’s always beautiful. 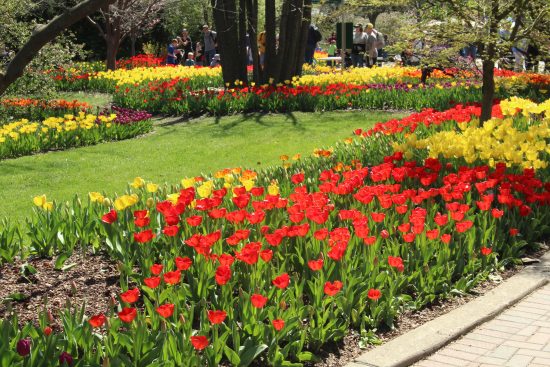 Yesterday, I got started on my yearly pruning. Shouldn’t have. I’ve got many more important things to do but it was a gorgeous day and I couldn’t resist. Pruning is one of my favorite gardening chores and I do it more aggressively than most. Always a vain attempt to get some sunlight into the nooks and crannies. If you were to look at the piles of brush in my yard right now, you’d think we were cleaning up after a hurricane. You’d be amazed that we have any trees left! But we do and mentally I’m already marking the branches to prune next winter. Again, in lieu of doing something more important. 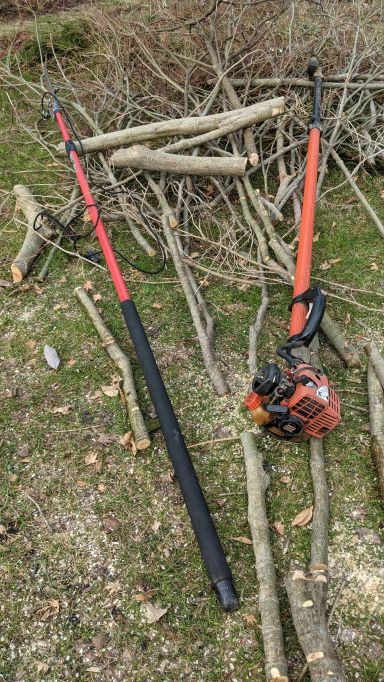 Two tools I am not responsible enough to own and just one of several piles of brush we created together. 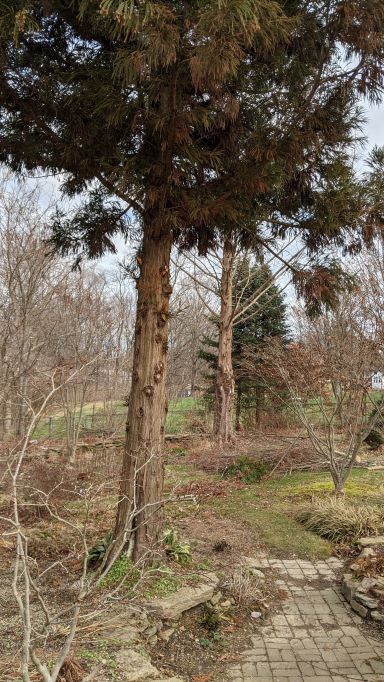 Who else does this to Cryptomeria? And the dawn redwood behind it?

And I’ll compromise with that chore too. Yeah, my pruning cuts are picture perfect but is my criteria always what’s best for the tree? Nope. Sometimes the health of a particular tree is compromised because of a compromise: I want it and some daylilies and, in the end, I can lose a tree or two because, obviously, I have more than enough if I’m dragging a hurricane’s worth of brush to the woods every winter. 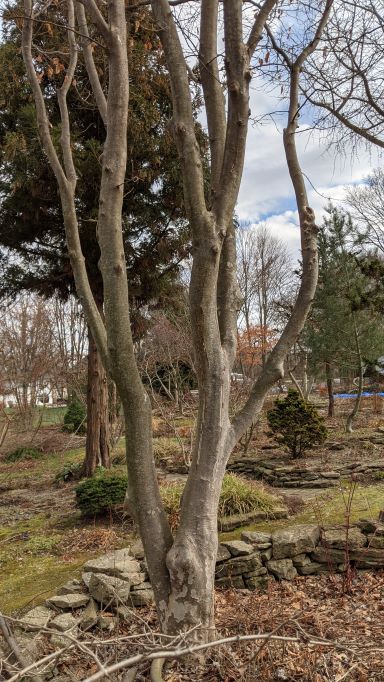 Look at what I’ve done to this Parrotia. Although, gotta say, if it ever develops exfoliating bark, it will be on full display.

Anyway, to our amazement, we survived the bomb cyclone of 2022 and started 2023 in about the best way imaginable. Michele and I drove to Atlanta on New Years Eve to meet the newest member of our family, our first grandchild, Celina Marie. She was beautiful and perfect and we’re all so happy. Per your warning not to speak of her ever, apparently you’re already jealous so I will end here and await your late night email apology at some point in the future. Maybe next December, as you seem to have a need to clear your conscience just before the holiday. 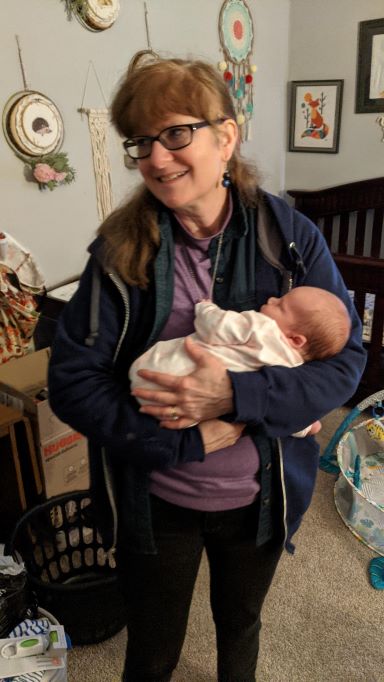 Wishing you and Michael a wonderful 2023. It will be fun to see you at some upcoming conferences and then, suddenly, we’ll find ourselves amidst the catapult they call spring. In fact, my hellebores are already budding. 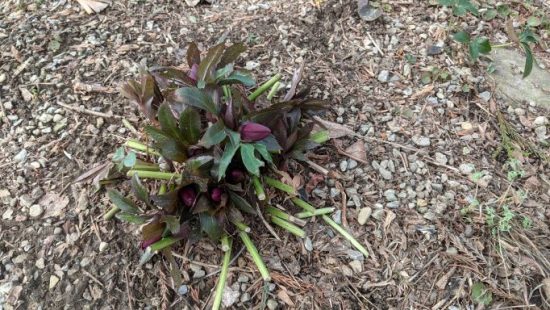