Voices in My Garage (My Tools Are Plotting Against Me)

My Dad is fond of saying, “If everyone you meet everywhere you go is a jerk, then maybe you’re the jerk.” He says this a lot, typically interrupting one of my anecdotes during family conversations. It’s so annoying, and I hate to say it, but I’m afraid my Dad is just another one of the many jerks I’m burdened with every day in my life.

Lately some really weird things have been happening around here. I’ve been overhearing some of my tools speak. Not everything they say is about me. Sometimes they’re just commenting on the weather or whatever. But most of the time, I swear, they’re talking about me and, believe it or not, most of them also are jerks. I’m beginning to think I’m cursed and it’s making me crazy.

So what happens is this. Most times I’m somewhere near the garage, or approaching it,  and I hear these little scraps of whispered conversation. The talking abruptly stops the instant they become aware of my presence. Below is just some of what I’ve heard them say.

Work Boots left in the garage: “I’m going to surprise him with the family of mice I’ve invited to live in me.”

The Tow Hitch: “Personally, I’m okay with the guy, it’s just his shins I hate.”

The Wheelbarrow: “Dude, I feel the exact same way!”

The Hoe to the Shovels and Rakes: “This is all about our livelihoods. We gotta protect our jobs. Monday night, the Tiller swims with the fishes.”

Japanese Digging Knife: “I hated to do that to him, but he ought not of used me like that.”

Japanese Pruning Saw: “Same here! It’s like he has no common sense! But if a knife fight ever breaks out in the garden, between us, we’ve got his back.” 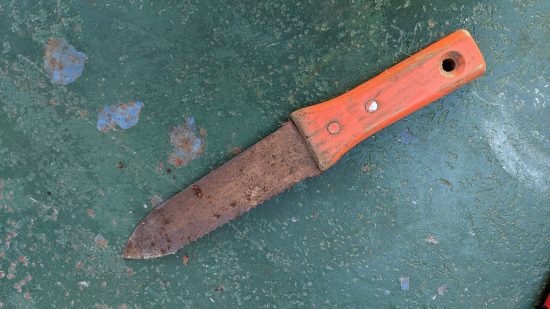 A Japanese digging knife, the perfect vector for tetanus.

First Pair of Pruners to the others: “I’ve been good to him. I’ve done everything he asks me to do, honest I have. I’ve been faithful. Geez, I swear it. So why does he need all of yous? What have yous all got that I haven’t got?”

Second Pair of Pruners: “Forget about him. He treats us worse than trowels.”

Fourth Pair of Pruners: “And he never ever sharpens us. Never oils us.”

Second Pair of Pruners: “Yep, like I told you. Worse than trowels. Worse than effing trowels.”

Fifth Pair of Pruners (forlornly): “My, my, hey, hey. It’s better to burnout than it is to rust.” 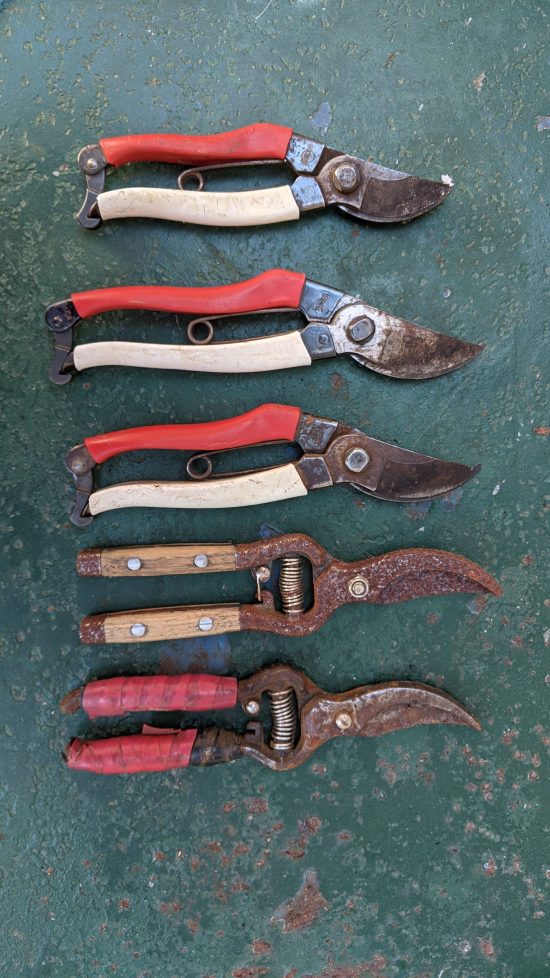 Second Pair of Pruners again: “Hey, next time he really needs to prune something, let’s all hide.”

Japanese Pruning Knife: “Won’t you all just shut up. You’re so dull.”

Axe: “They’re dull? Are you kidding me? No, I’m the dull one. Can’t remember the last time he sharpened me. And when he did, it was a rush job. So typical. And he did it all wrong.”

Second Pair of Pruners: “Of course he did.”

The Hoe to the Shovels, ignoring the Hose: “Bad news. They’re all scabs! The Hard Rakes are out and the Leaf Rakes are saying they were never in.”

Lawn Mower: “He uses me for things I was never made for. I’m telling you, what a jackass! Has he ever read an instruction manual? Nope. Not once. Never. And, no matter how many sticks and rocks I pelt him with, he just won’t learn.”

(Later that day) the Hoe to the Shovels: “The Rakes are back in.”

Tool Belt: “It’s not my fault. I swear I try to make him look sexy. That’s what I do, make people look sexy. And I’m damned good at my job. But he gives me absolutely nothing, nothing I tell you, to work with!” 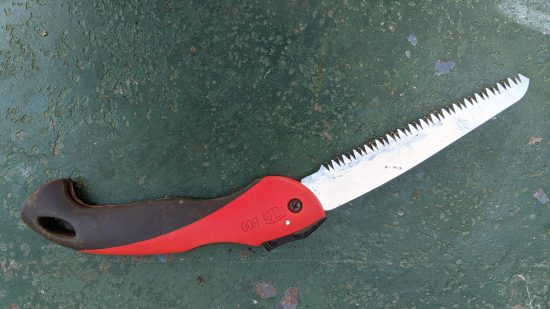 Sprinkler: “Have you ever seen him try to move me and not get wet? It’s hilarious. I soak him every time!”

Plastic Hose Valve (laughing): “Me too! Me too!”

Brass Hose Valve to the Plastic Hose Valve: “Shut up, you cheap imitation.”

Sprinkler (in a fit of rage): “That’s a filthy lie! I’ve gotten him wet more than the two of you combined!” (Then falls off the shelf and breaks.)

Sprinkler Timer: “Made of even cheaper plastic than me, I see. And I leak like the Daylily Society at a comedy club.”

Hard Rake: “Tines down when I fall off the rack. Tines up when I’m laying on the ground. If he thinks I’m his friend, he’s got another big knot on his forehead coming!”  Then sings to himself, “I got the Tiller, but I didn’t shoot the deputy.” 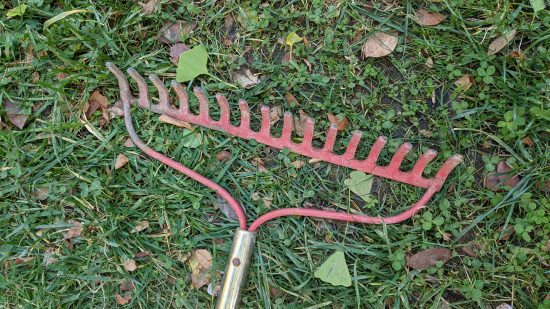 Chainsaw: “How perfectly delicious, I think he is actually hoping I’ll start.”

The Hoe to the Hard Rake: “The Power Washer goes down next!”

The Hose: “My favorite band is the Kinks.”

Heavy Leather Gloves: “I’ve got a black widow living in me.”

The Hoe to the Hard Rake: “How’s the Power Washer?”

The Hard Rake: “Oh, the Power Washer. Won’t see him no more.”

Ladder: “I’m literally the most efficient thing ever invented for killing off middle-aged men.”

Snow Shovel: “Let me see the data on that.”

Merry Christmas and Happy New Year everyone. And for those who want to buy this jerk a gift, maybe some counseling. Or quality tools with good attitudes.