The Silver, Gold, and Russets of the Season; A Letter from the Midwest

Gotta admit, your last letter read like poetry. What else can you say about a passage like this: “About three weeks ago I was lying in bed, deep under a down duvet in the earliest hours, watching the sun slowly illuminate the trunks of trees on the ridge above and feeling a cool breeze on my face gently coming and going from the open window–it was like being kissed awake.”

Wow. Just wow! Like the finest art always seems to do, that passage transported me into a world I’ll never know myself. Very well done. Closest I’ll ever get to reading a romance novel.

My mornings never begin like that. Mine all begin with pain, groans, regret, an endlessly scrolling of things I need to do suddenly running through my mind like movie credits. Always in a rush to start. Never knowing where to begin.  First words out of my mouth are invariably strings of cussing so rich and imaginative that, I’m told, they are reverently read by the souls of dead beatniks in the coffee shops of Hell.

So on the cosmic plane, maybe I deserved the gloating that so jarringly contrasted with all that beautiful writing in your letter. So, yeah, about your GardenComm Gold Medal for your excellent book, Tropical Plants and How to Love Them, indeed I had heard and, indeed, have been trying to forget. Nevertheless, I’m very happy for you, and will be the first to admit this recognition was well deserved. 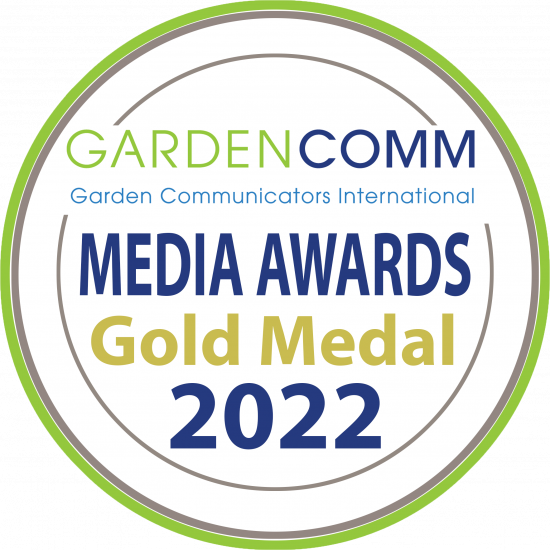 You asked, “Now how on Earth did that get in there?” I know how it got in there. You logged onto your computer, took twenty minutes to find the emblem in your files, resized, downloaded to WordPress, copied into your text, thought up a caption, and cackled maniacally for 45 minutes. But other than that, you’re right, it is and might always be a great mystery.

And to think, until I saw all that in your letter, I had been proud of winning a Silver Medal. 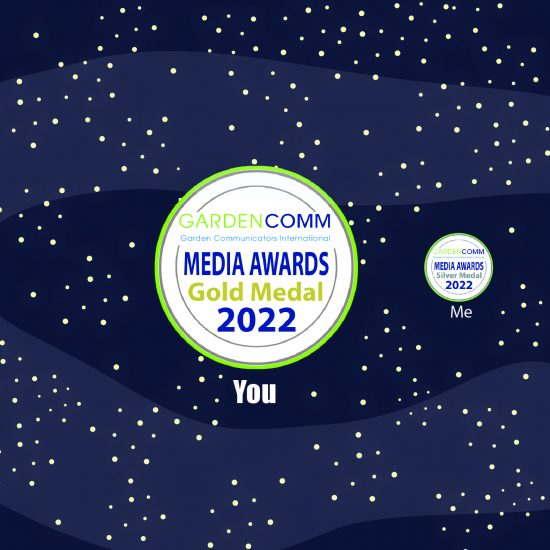 By comparison, I feel very small. 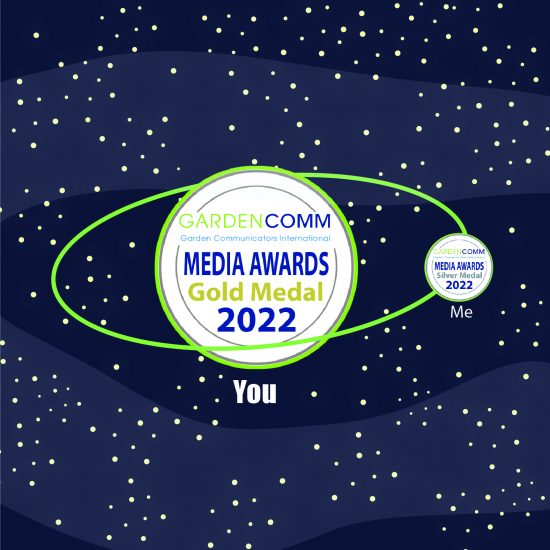 …and very much in your orbit. (Credit: Shannon Stanforth for the graphics.)

I’d like to think that, if the roles were reversed, I’d show more class, but no one on the planet, including me, can possibly imagine that happening. So, I will chalk this up to karma for cussing so much and, perhaps, the erratic, arbitrary capriciousness of the judges. Maybe I had a comma in the wrong, place. Too many non-sentence sentences. Perhaps I took them too far past their comfort zones with off-color humor. So, going forward, I will simply try to cut my morning cussing by half and try harder to write good. Or at least write the banal, trendy, choir fodder stuff that will, like puppetry, cause the judges to involuntarily tap my submissions with their magic wands. Like a twitch. Or the first motion of a prolonged seizure. 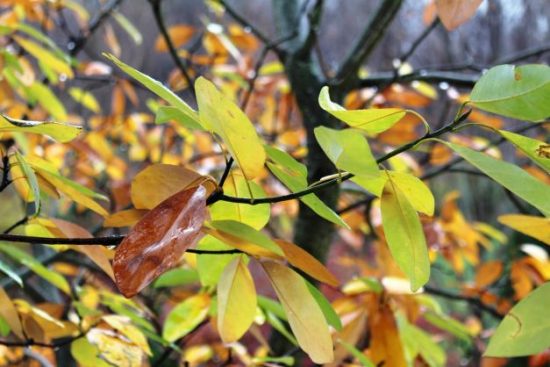 Although the fall color of sweetbays might get lost in the Crayola jubilation of October, in December it brings me great joy.

The dying days of this garden year continue to be mild and surprisingly rewarding. The November to April gray gloom has descended, but even now in December there is still plenty of color chugging along. Sometimes I feel like I’m more fond of the late fall color than I am its peak. The maples and sassafras and blackgums indeed dazzle, but there’s something more noble about the russets and browns of oak leaves hanging on. I really like the clompy (a word I made up and demand it makes next year’s Oxford English Dictionary List of New Words) show of green, yellow, gold, and brown of the sweetbay that has grown well above our second floor bedroom window. I’m amazed by the sober psychedelia of ‘Burkwood’ viburnums. And, like you,  I truly love whatever colors oakleaf hydrangeas decide to wear. 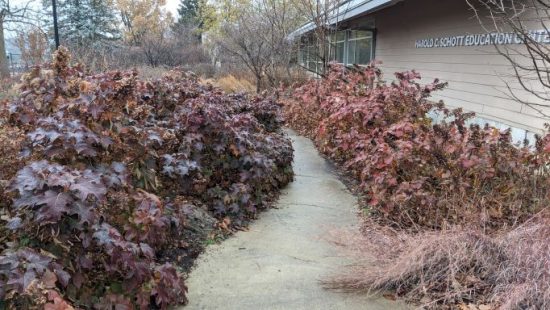 A comparison of Oakleafs. ‘Pee Wee’ on the left, ‘Sike’s Dwarf’ on the right at the Cincinnati Zoo & Botanical Garden. 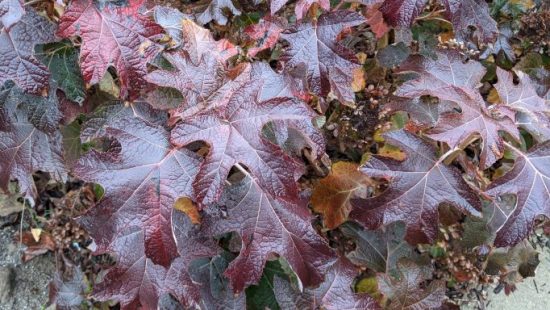 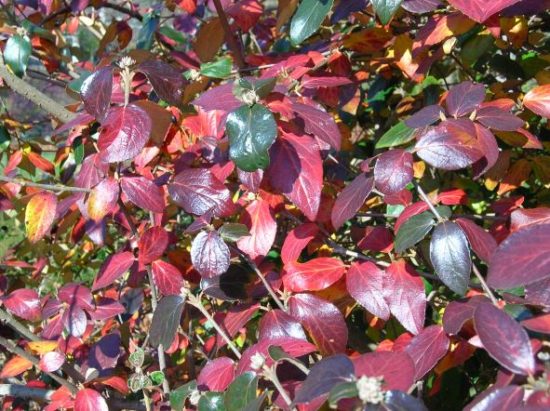 I don’t remember ever seeing ‘Burkwood’ Viburnum listed for great fall color, but, dammit, it has great late fall color.

I’ve been underwater with indoor house projects of late so the garden has gotten little attention. I finally fished all the ginkgo leaves off the pool cover. Took a new approach. Each day after work, ten to twenty minutes of scooping them out. Two weeks of lifting at non-ergonomic angles and plenty of putrid odor and the job is done. We’ll see how the soaking wet 4′ x 4′ x 4′ pile of matted ginkgo leaves I netted out breaks down in the compost bin. I mixed in some mushroom compost and also added hellebore leaves but I’m not expecting it to heat up. Fortunately, that was but a small fraction of the total leaf drop. I was able to chop most of the leaves with my mower better than any other year. Then I blew the little bits wherever. Saved a lot of time. 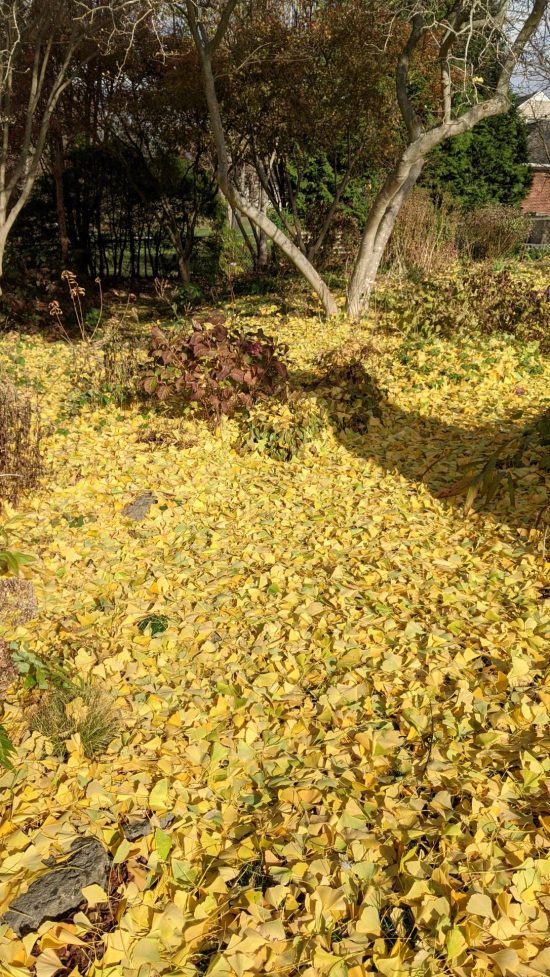 For whatever reason, my ginkgo turns much later than almost all the others. This photo was taken on 11/20/22 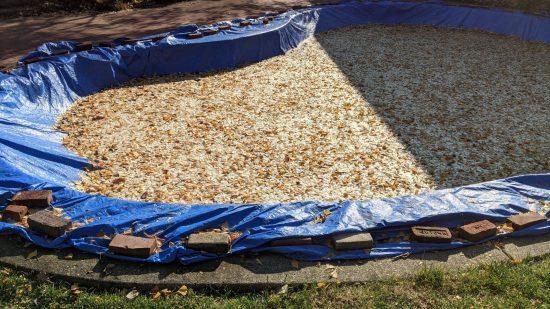 Unfortunately, many of its leaves fall into the pool. 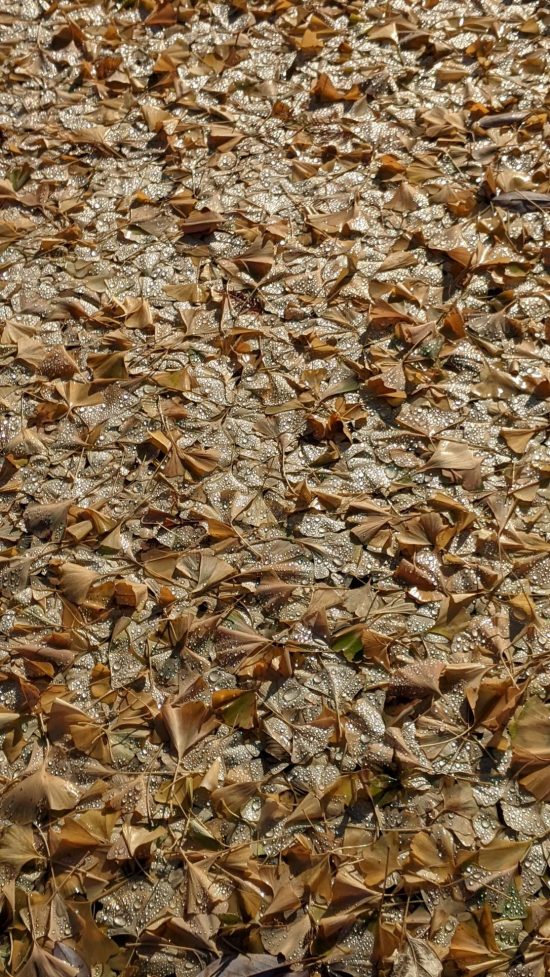 While a compost heap’s worth of ginkgo leaves on your pool cover is not ideal, there is an almost literal silver lining. I was rewarded one morning to see how beads of water had formed on them like gems.

The upcoming calendar is daunting. Projects to finish, both inside and out, travel, talks, holidays. Oh, and we’ll be heading to Atlanta more often to visit our son and daughter-in-law. They just had a beautiful baby daughter, our first grandchild. Her name is Celina Marie. 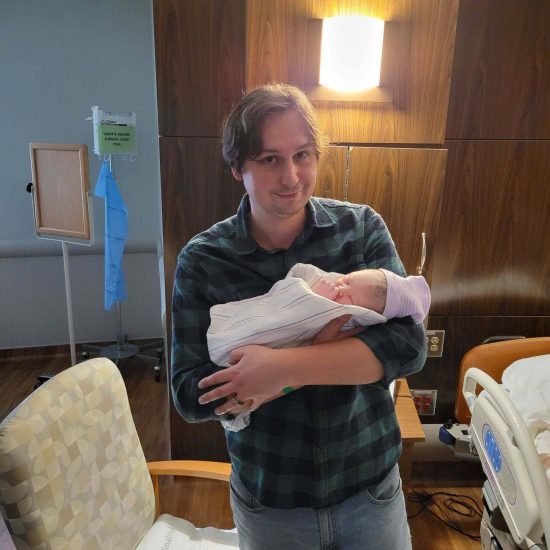 My son, Tom, and daughter Celina, born just days ago.

A beautiful baby grand daughter, Christmas, and a New Year, lots of reasons for optimism and joy. I’ll try harder to greet each morning with a death grip on positivity. And I will be receptive to feeling the clompy green, gold, yellow, brown sweetbay leaves kiss me awake. I vow to cuss less in 2023. And who knows? Maybe next year I’ll win a Gold Medal and you won’t. And, then, haha, you’ll be in MY orbit!

PS-That whole thing about the low water on the Mississippi causing a supply chain Big Gulp shortage, it was all just a ruse to drive up prices.