This Maryland couple fought HOA rules requiring them to grow lawn and it resulted in a new state law forbidding HOAs from doing that. Their long battle ended in October of last year with the passage of the law and got some attention then, including an interview in Washington Gardener Magazine, but this week the New York Times discovered the story and it’s getting picked up everywhere. (Including in the U.K.)

I posted the story on GardenRant’s Facebook page and got some interesting comments:

Susan Harris I hope those of us using native plants will continue to bear in mind aesthetics and not just plant anything “native” and let it get out of control and spread “because I’m allowed to”. We have a reputation at stake in creating “ecosystems” that are pleasing as well as healthy.

I’m commenting that we “native lovers” shouldn’t go overboard now that this little victory has been won. We should be careful to make it look groomed and deliberate, not neglected.

Agree. In unskilled hands a native garden can turn into an unruly weed patch in no time. This issue will be walking a fine line.

I agree, too! But first, the battle and the new law is about lawnless yards, not the origin of the plants used to replace the lawn. And getting rid of lawn – like any perceived improvement in a garden’s sustainability – is easily conflated with the use of native plants.

But lawns can be replaced with all sorts of plants, paths, patios and structures – not just meadows. Obviously! They can look just as good as yards with lawn – often better. Former GardenRanter Evelyn Hadden wrote a whole book on the subject.

The front yard of the HOA-fighting couple in Maryland proves the point. It’s designed and tended.  It apparently drove their (truly awful) next-door neighbor crazy but I’d posit that to normal people, it looks damn good. 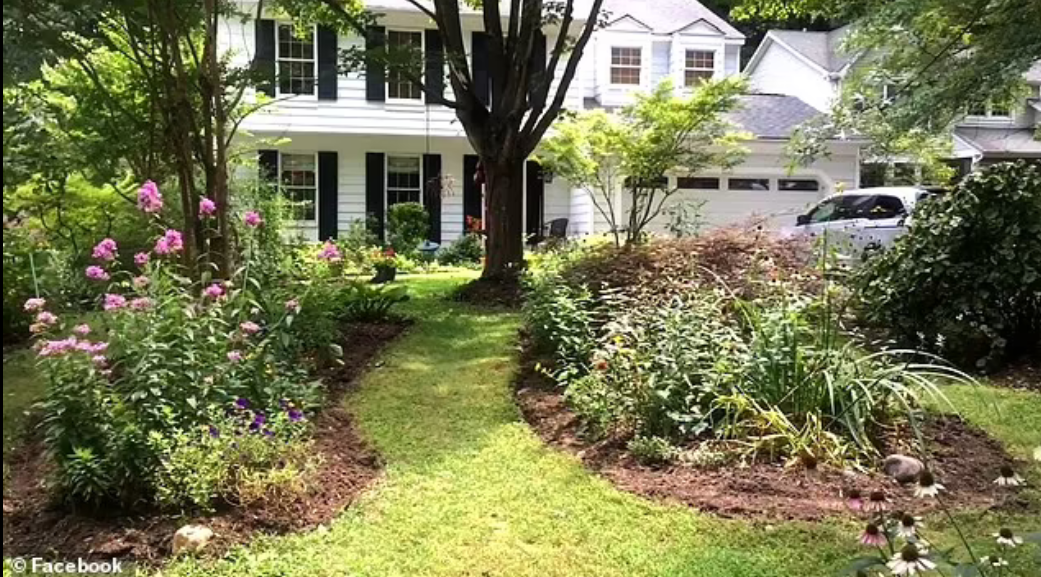 My own front yards in Maryland are two more lawnless examples: 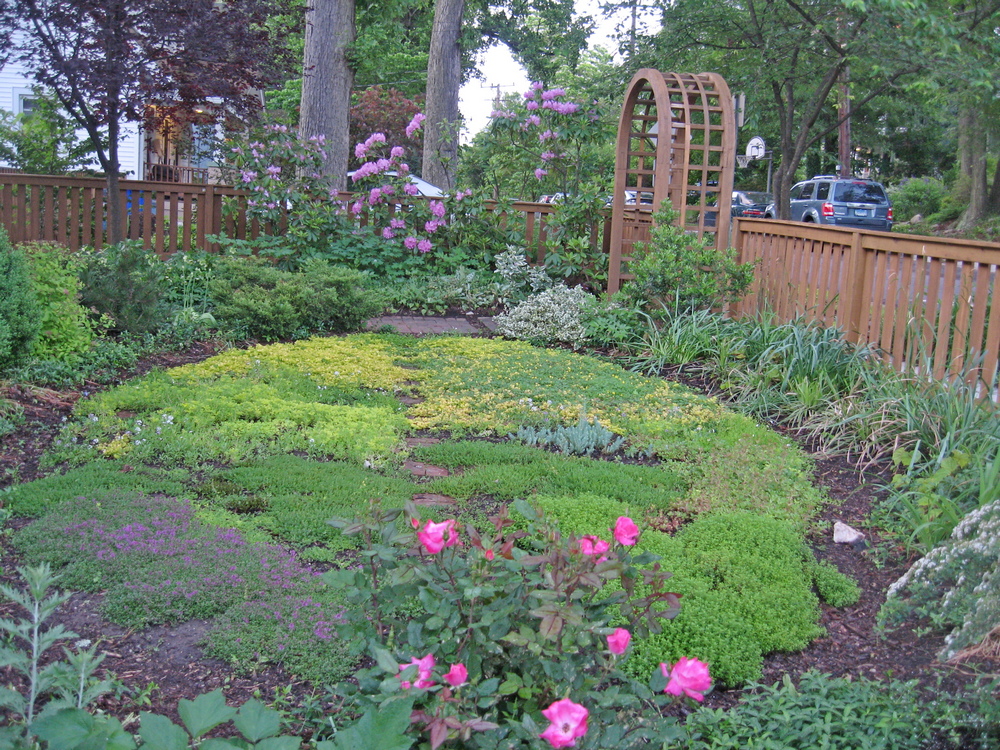 Above, I replaced an oval patch of lawn with a variety of short, sun-loving groundcovers that succeeded to wildly varying degrees. Even if these plants were taller, the geometric design and crossing pavers makes the garden look designed and tended. 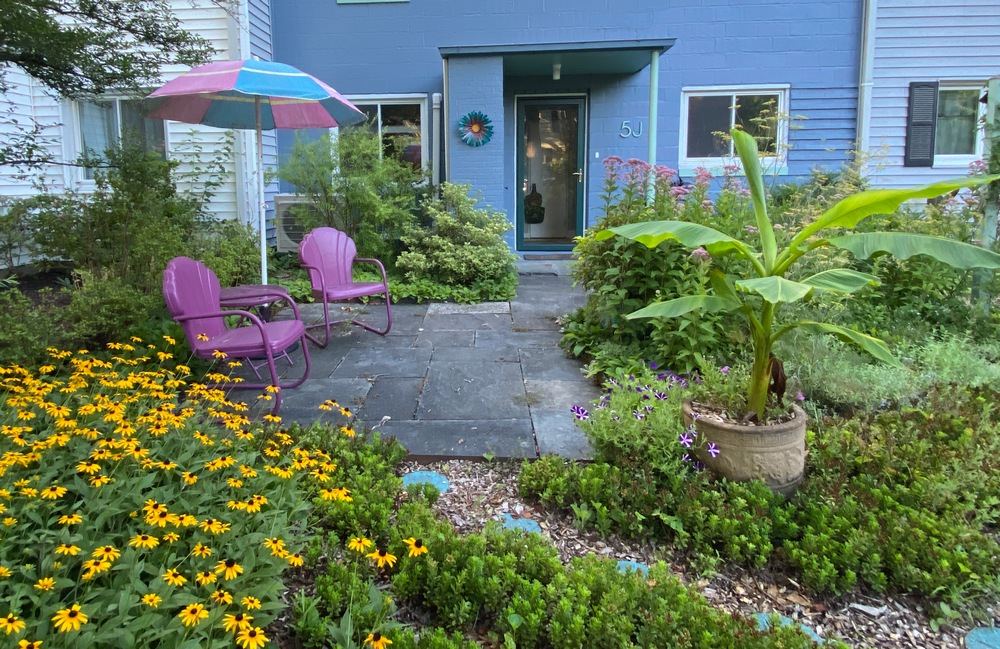 My current front yard, which was all-lawn when I moved here 11 years ago, does have taller plants – including Joe Pye Weed – but the overall effect is still cared-for and deliberate.

Most Infuriating Bits in the New York Times story

The HOA (in Columbia, Md.) told the Crouches that “their plantings not only violated the bylaws, but were eyesores that hurt property values. ‘Your yard is not the place for such a habitat. ‘

The neighbor’s letter complained that the Crouches’ yard “was overgrown with weeds, figurines and barrels filled with rainwater,” which the couple contested. The neighbor claimed he “couldn’t enjoy his own property due to the ‘mess of a jungle’ next door.” Oy!

What the New Law Says

In the NYT piece the Maryland law is called “the “first in the country to limit homeowner association control over eco-friendly yards.” And “the measure gained bipartisan support, passed with near unanimity, and became law in October 2021.” It’s described as “forbidding homeowner associations from banning pollinator plants or rain gardens, or from requiring property owners to plant turf grass.”

But let’s read it ourselves.  Link

It explicitly says the law does not “prohibit reasonable design and aesthetic guidelines regarding the type, number, and location of low-impact landscaping features.” It also doesn’t apply to properties “eligible for inclusion in the Maryland Register of Historic Properties.”

Not Just HOAs – Cities, Too

And above is an example of a wildlife-friendly front yard that HOAs in Maryland are probably still allowed to outlaw – because it doesn’t seem to be “maintained” and “regularly tended.” At least that’s what the City of Greenbelt cited it for. Note the National Wildlife Federation certification sign? Apparently that’s not enough to skirt enforcement of laws requiring upkeep of private yards. 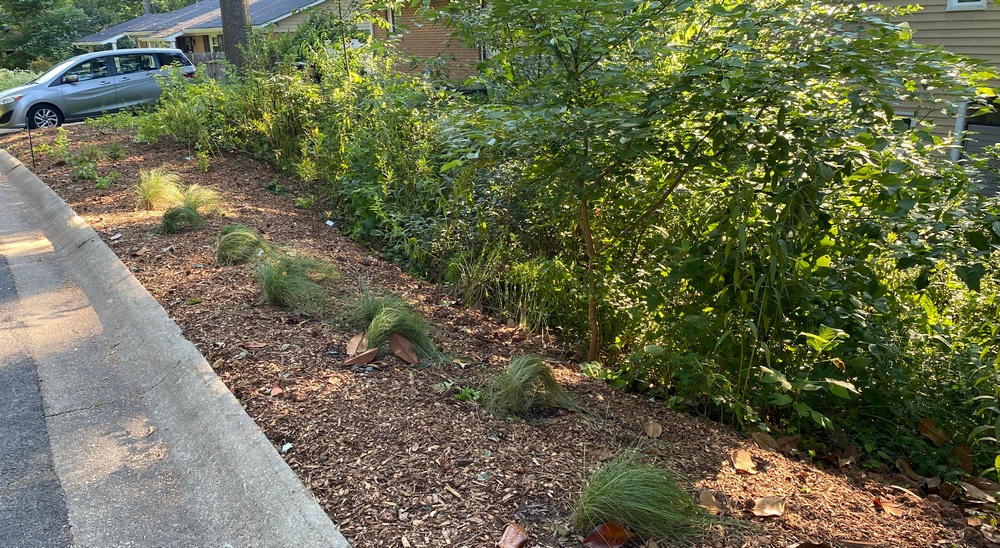 I’m told that the citation by the city led to the homeowner creating an edge of Pink Muhly Grass along the street, a design feature that I agree helps make the yard look more tended.

Note here that it isn’t just the (seemingly universally hated) HOAs that require private yards to be “tended.” Though I imagine if you’re a strict libertarian about the use of private property, you aren’t happy about that.

Eleven years ago I moved into a my co-op about 20 miles south of the Crouches in Greenbelt, Md.  I knew it had many, many pages of rules but I made sure it didn’t require lawns, and it doesn’t. It does require that ground be covered to prevent erosion and that the whole yard be (minimally) maintained.

And I’m glad it does! It’s not just about property values, though if I were selling my townhouse any time soon I’d care more about that. No, it’s the basic fact that unkempt gardens, especially ones without lawn, can make properties look abandoned. They can be sorry sights to see across the street or on your daily walk.

Okay, free-the-garden libertarians, go ahead and call me pragmatic, a compromisor or some other term I probably don’t like as much. I’m okay with it.