“I think it’s better if we talk about gardening.” 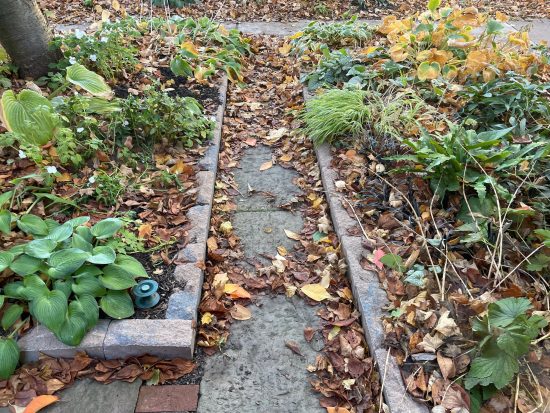 That quote appeared in a story about the election season and how people have been feeling “divided and tired.” Haven’t we all?

Though I’ve never been one to go out of my way to avoid political news and I always vote, I became much more immersed in the news cycle when I began working for a newspaper last April. (Yes,  I am always late to the party with these things.)

When I look at my screen in the morning and look at what the people around me are talking about, there’s no escaping politics.

Fortunately, I do have a garden to come home to. Even though it’s kind of a bedraggled mess at the moment (see above), it’s a refuge.  But let’s say I didn’t work in an office where politics is discussed every day. Would I retreat from it entirely? Would I outlaw such talk in my gardening circles?

No. I wouldn’t and I don’t do it here. Politics and elected leaders inevitably have their impact in areas that intersect – deeply – with gardening.

It would be nice to ignore climate change, but that’s impossible for everyone, including gardeners. One friend, who lives in a Zone 5-6 area of the West –  not Texas, Arizona or Southern California – posted this past summer that her garden was  “a complete, hot, dry wreck with weeks of 100-degree weather” and that “the heat and the smoke are just too much to cope with.” She’s rethinking everything she does in the garden.

Climate change mitigation, which includes reducing global emissions to net zero,  is largely in the hands of political leaders.

And then there are pollinators, threatened on every side, but mainly by habitat loss, and of course all the threats are aggravated by climate change.

Maintaining the wild spaces pollinators need, again – one way or another – winds up mainly in the hands of people who are elected. Will they support the objectives of developers or Big Ag, two entities who bear major responsibility for pollinator decline, or will they listen to ecologically-minded scientists and others?

These issues are among those I have no hesitation about bringing up in a gardening blog and will continue to do so. It won’t be often, but it will happen. They are issues I am thinking about today, as my state faces a stark choice between someone who would reduce NY emissions as 23 other states are doing and someone who is just fine with fossil fuels.

There are micro versions of this, too. What about people who are harassed by their neighbors for growing pollinator-friendly front yards? When it comes time for those gardens to be saved or destroyed, the decision generally comes down from – yep – an elected official.

There are so many examples and I am sure many more will be appearing on our radar in the years to come. It’s important to talk about them.