Fall Foliage and the Scariest Garden in Town

Great Foliage in My Garden 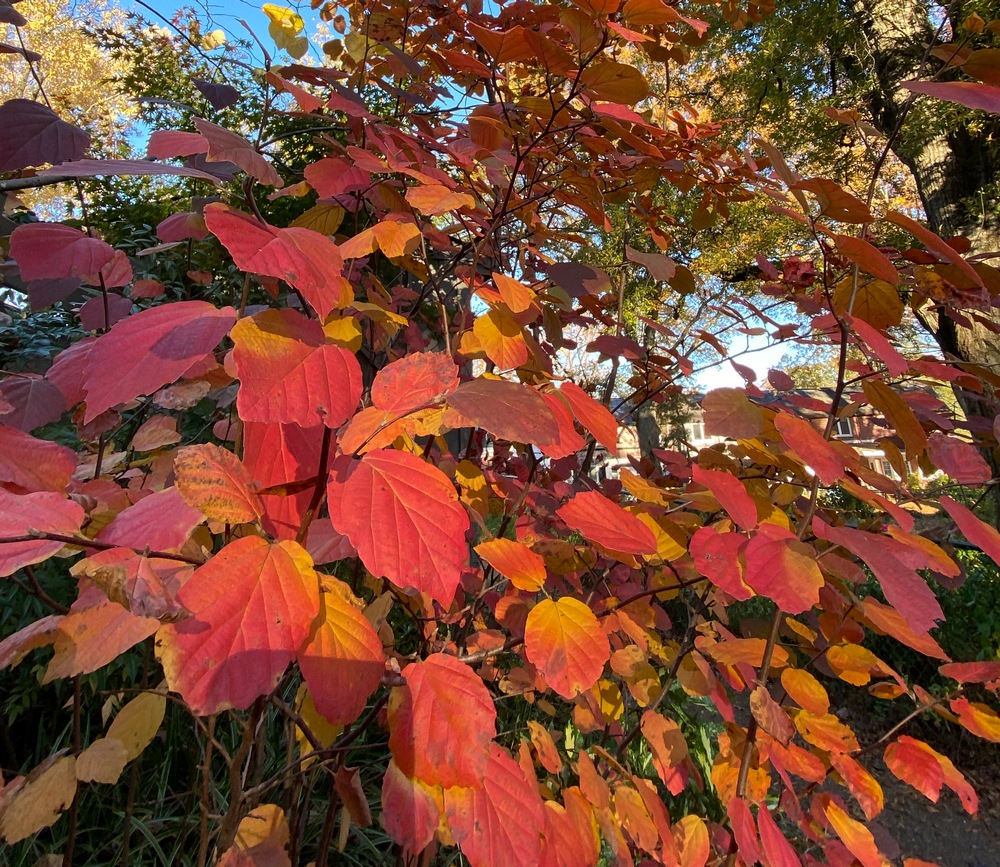 Fothergilla in my garden, late October.

In July I showed off the 16 native plants that MAKE my garden, but excluded my Fothergilla from my recommended shrubs (just Ninebark and Oakleaf hydrangea), saying, “I have a Fothergilla in an out-of-sight spot but didn’t list it here because after it blooms it’s not much to look at.”

Well! One alert commenter told me to just wait until fall, which I guess I’d forgotten about altogether and boy was she right.  In the foreground above is what it looks like now. At least this ‘Mt. Airy’ cultivar really delivers in the fall.

What’s behind the Fothergilla in that photo is a Purple Smokebush (Cotinus x Grace) that’s hard to capture the grandness and strangeness of from that angle, so let’s go to another angle. 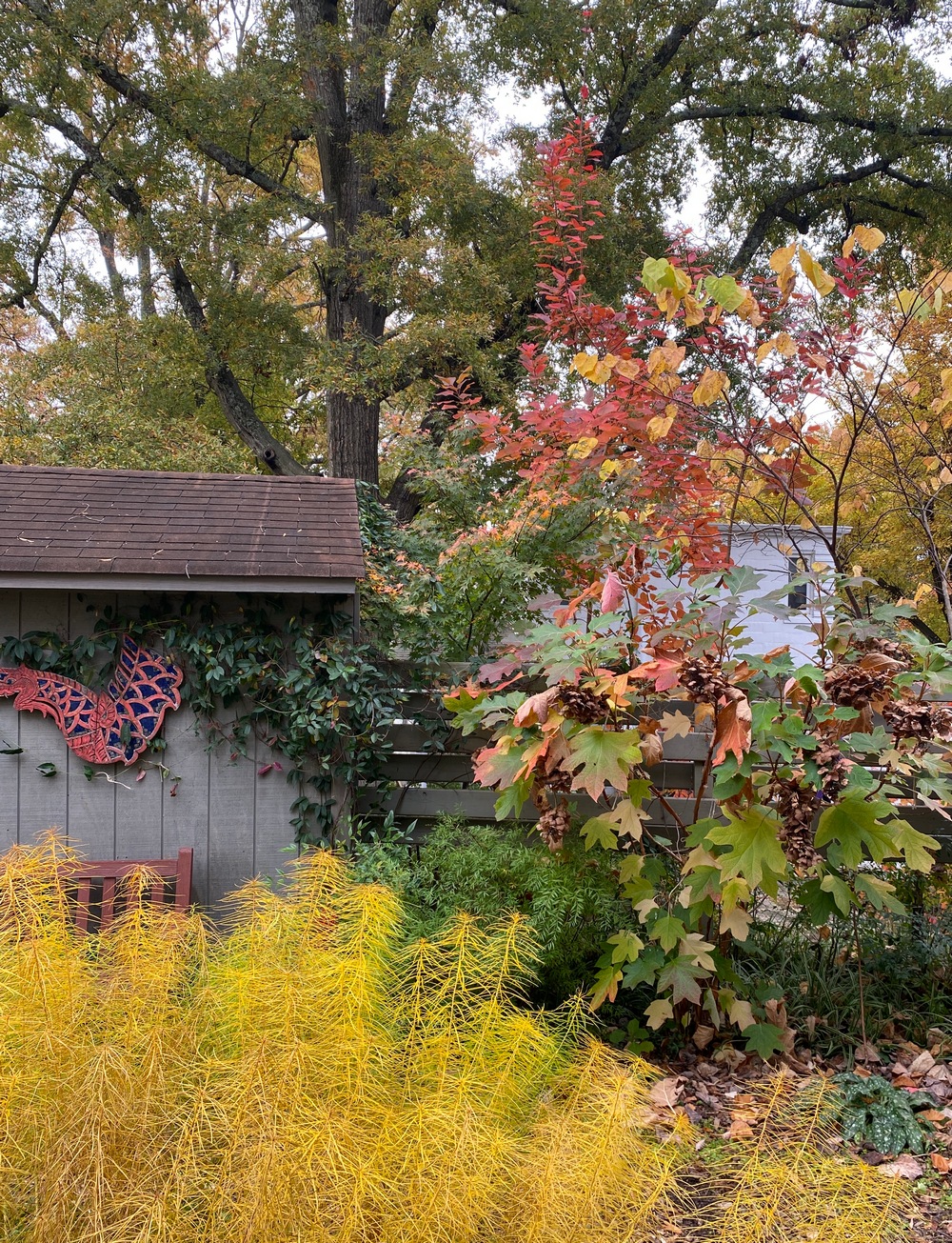 Above, the Smokebush is the plant in this grouping with the tallest red leaves. It’s about twice as tall as the shed!

(In the foreground, Amsonia hubrichtii, and an Oakleaf Hydrangea in the center.)

Some sources recommend cutting Smokebush back severely in the spring but instead, I’ve left it alone (except for keeping it away from the sidewalk) to see what it would do. And the results have been surprising height and most of it, its weird growth pattern. 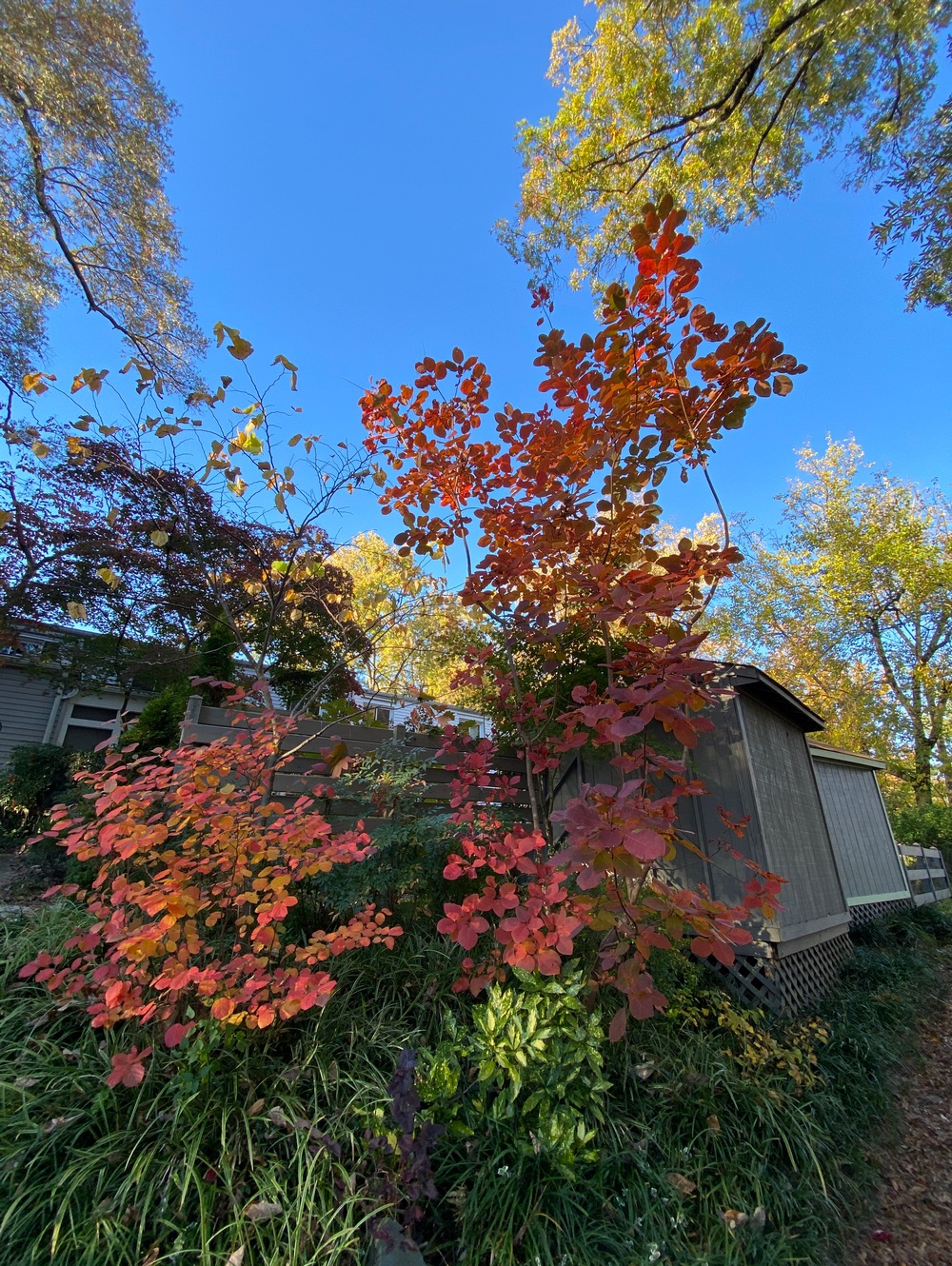 In this shot you can see one of its strange elbow-shaped limbs. The Fothergilla is on the left. 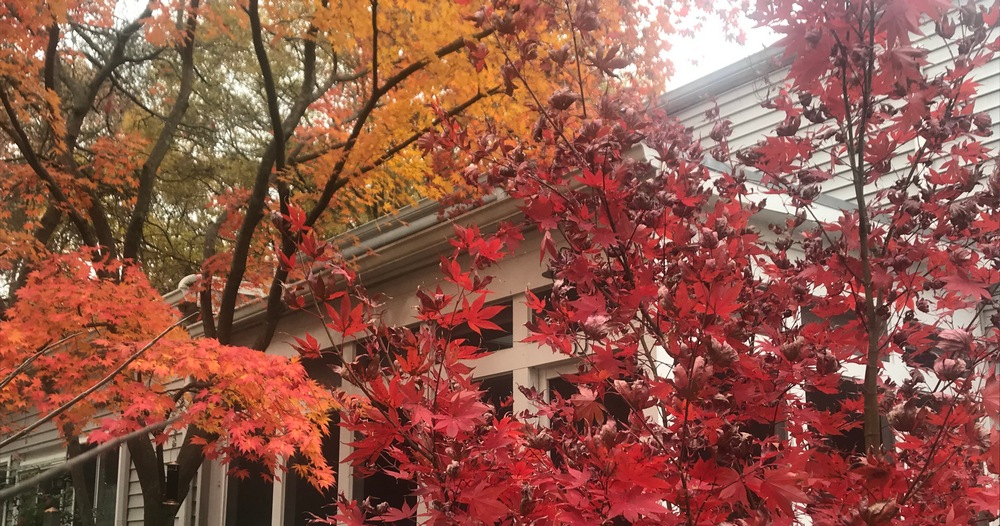 Now is when my Japanese maples get super-showy. I inherited the larger one on the left and can’t ID it but the very red one is a new ‘Osakazuki’ cultivar.

Just a 10-minute walk from my house is a beautiful lake dug during the New Deal to put people to work.  That one jobs program has enriched the lives of sooo many people over the 85 years since then, including me. It’s high on my gratitude list. 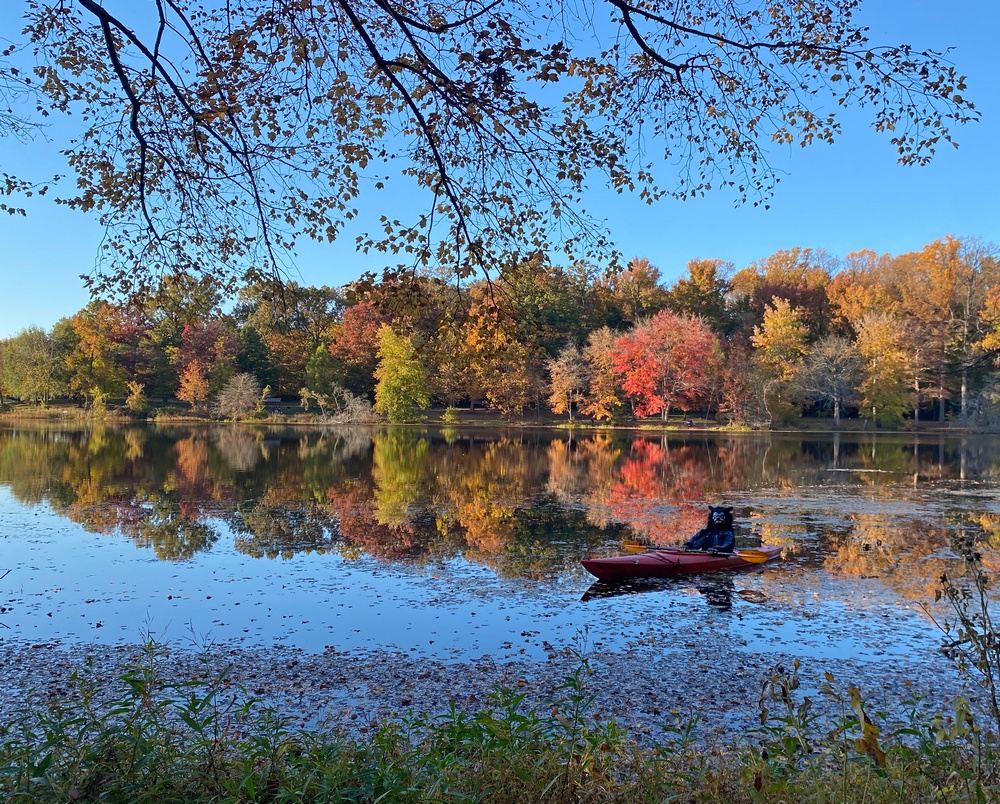 Last weekend my Rant partner Marianne visited me here in Greenbelt, Md. after her talk at the nearby National Arboretum, and we walked the one-mile path around the lake. I walked it again the next day and happened to notice this bear werewolf kayaking by. As one does.

(Updated after the wearer of the costume confirmed that it’s a werewolf, not a bear after all!) 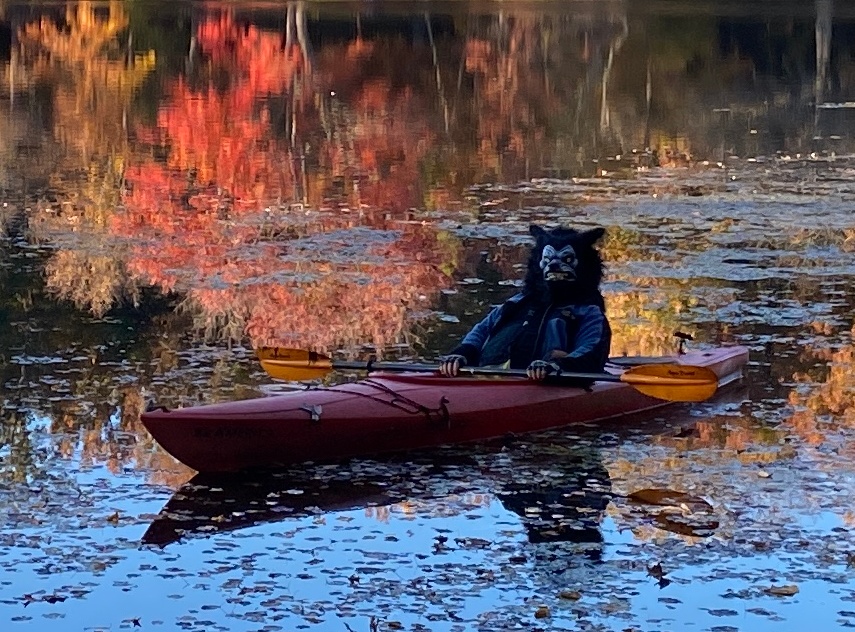 Close-up of the bear werewolf.  I waved, it waved back, and only later did I learn that the bear was played by the gardener who lives along the lake, just across the path from this spot. 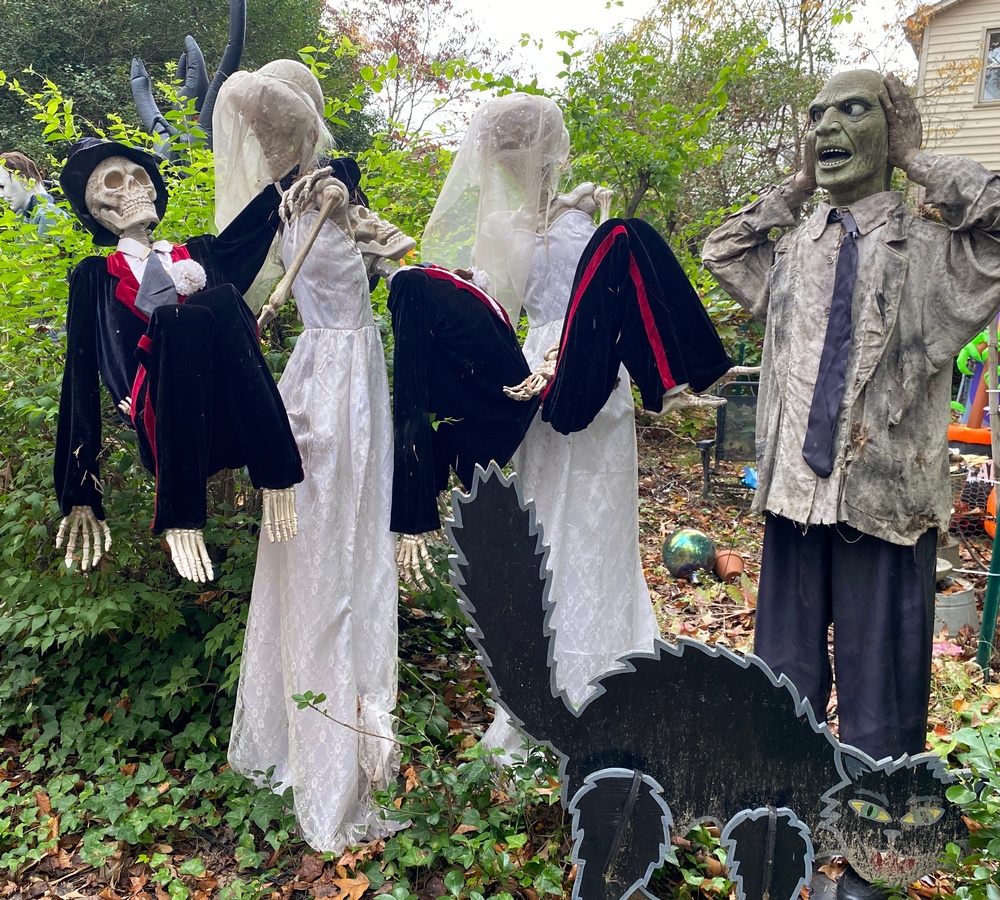 This is a small part of the bear-impersonator’s lakeside garden this time of year. The many creatures on display get much scarier when they start talking and moving and screaming and what-not as passersby trigger the motion sensors.  Here’s my 1:37-minute video of the show.

Something else I’m grateful for? This inspired display for the delight of the community, and many others I see on my walks and bike rides around town.  I do absolutely no Halloween decorating myself and am helpless when it comes to costumes, but I’m thrilled by the efforts and amazing results of the people around me.
By Susan Harris|2022-11-04T17:55:33-04:00November 4, 2022|9 Comments