During the early stages of my plant geekiness, I was really fascinated by two groups of plants–small Asian maples and hornbeams. Someone once told me, “Hey, small trees must be your type.” Well, okay, maybe that’s true, but probably because I can fit more of them in my yard. So maybe size does matter. I can tell you my collection of small maples is mighty, especially when it comes to Fall color, and, with some of them, also Spring color. As a rule, most of the many small maples punch way the hell above their weight. 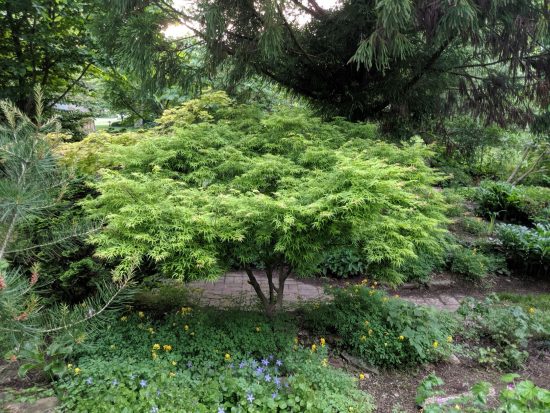 On the other hand, hornbeams (Carpinus) are much more subtle and discreet. They dole out their beauty with modesty and restraint. Classy-like. Knock them, if you must, for, let’s call it, gentle Fall color; complain, if it pleases you, about their slow rate of growth; and, go ahead why don’t ya’ and feel totally free to mock their understated flowers and fruits, but add into the equation their fine form, nice bark, and, more than anything else, their forever fresh, neatly pleated foliage, and the numbers don’t lie. Hornbeams belong on the black side of the ledger. File them under: “Greater Than the Sum of Their Parts.” 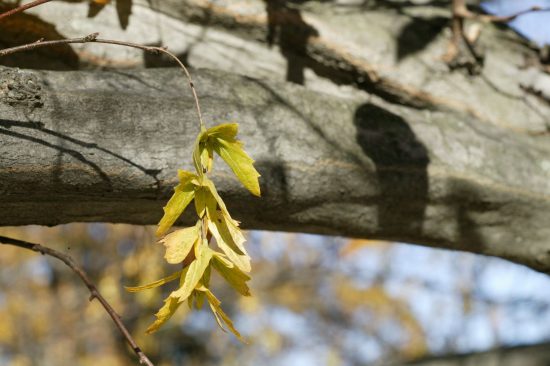 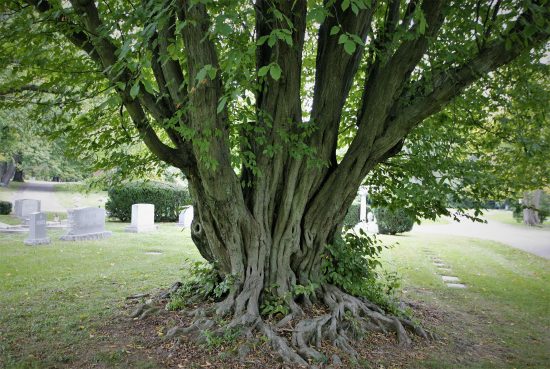 A grandaddy of a hornbeam at Cave Hill Cemetery in Louisville.

Sometimes I like to make this comparison: hornbeams are to beech what Mini-Me is to Dr. Evil. Somewhat surprisingly, the two genera actually come from different families. Hornbeams reside in the birch family (Betulaceae). Beech are lumped in with chestnuts and oaks in the Fagaceae. But never mind that, the likeness between beech and hornbeams cannot be denied. Similar bark,  form, foliage, and, most importantly, that same indescribable “old soul” depth of character. An old hornbeam, despite being half the size of a neighboring beech, has nearly as much grandeur. 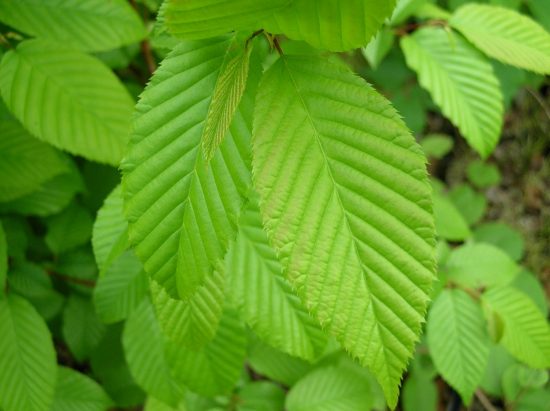 Our North American hornbeam (Carpinus caroliniana), like our American beech (Fagus grandifolia), is an only child–no sibling species on the continent. And, like the American beech, it is a stable member of the genus. Neither American beech nor American hornbeam offer anything resembling genetic diversity when it comes to size, shape, leaf color, leaf shape, and beyond. There are one or two hornbeam cultivars out there that have a little better Fall color, but other than that an American hornbeam or blue beech or musclewood or any other common name you want to call it looks and feels pretty much like all the others. Finally, belatedly, this species is getting some attention from the tree-buying public, because it really is a great small tree deserving of more usage. 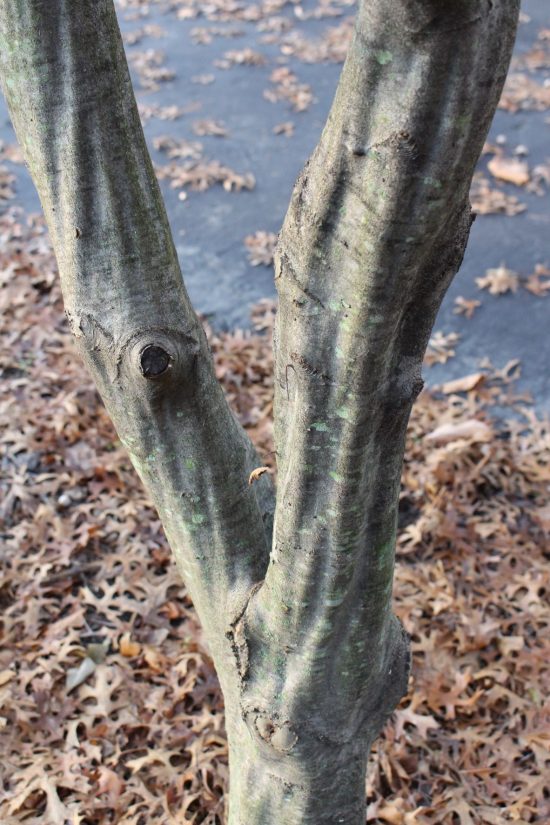 On the other hand,  the European species, Carpinus betulus, like the European beech which it is in no way related to, is a genetic wild child. It comes in just about every flavor, all kinds of variations. So you’ve got round forms, weeping forms, and a dozen or more fastigiate versions to choose from. All those selections, and, yet, I actually prefer the straight species. Yes, I know that I just committed heresy by saying that. No, I don’t think it’s the first time. 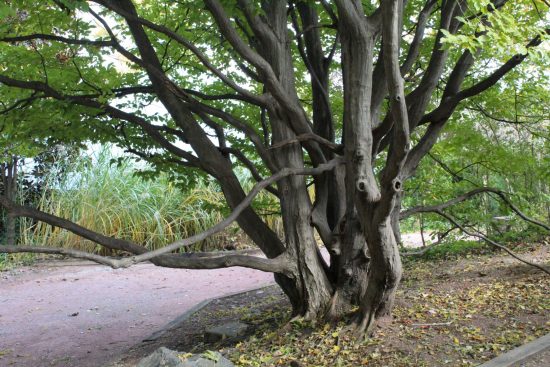 Straight species Carpinus betulus at the Cincinnati Zoo & Botanical Gardens. And, by the way, maybe my favorite tree anywhere on the planet. 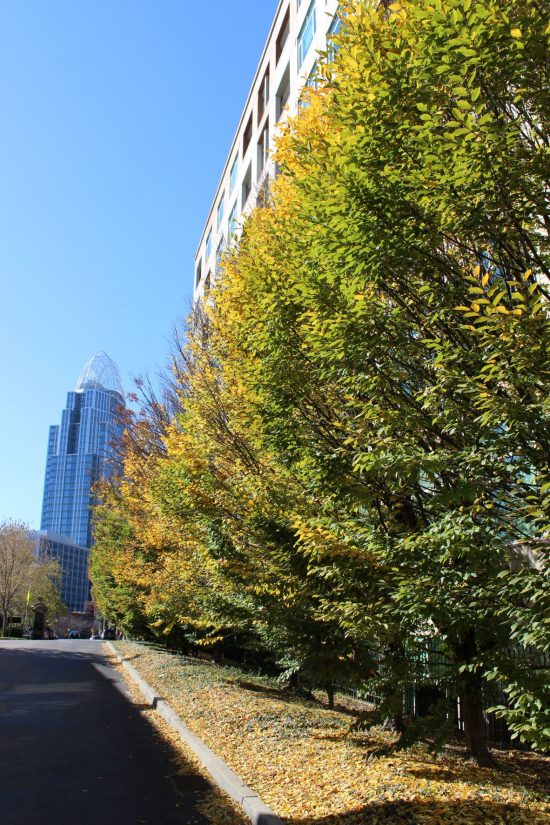 Any one of several fastigiate forms of European hornbeam doing nicely in downtown Cincinnati. 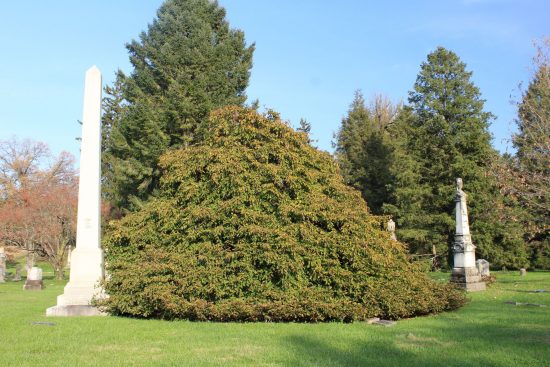 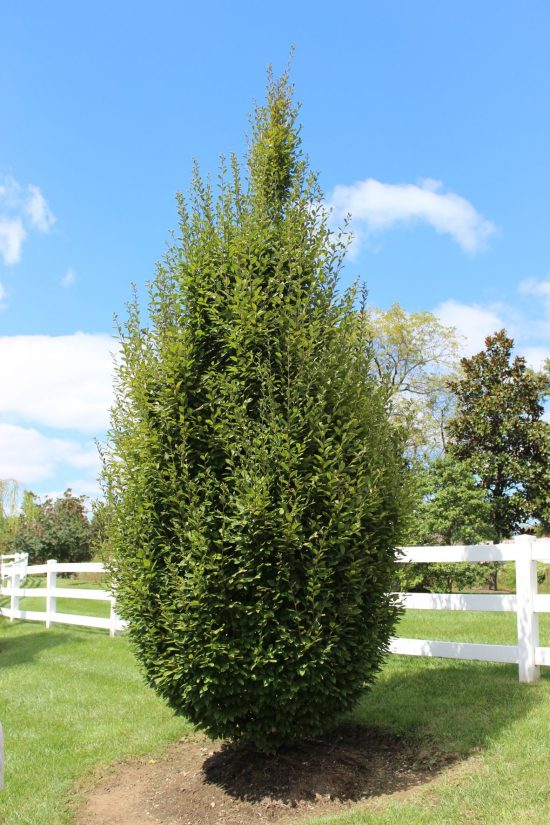 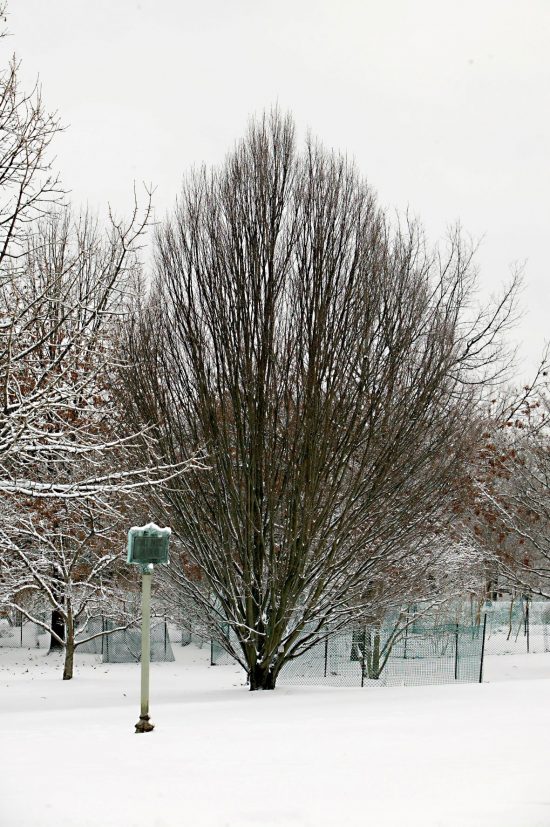 Virtually any hornbeam will present a striking winter silhouette. Most also make about as good a screen as a deciduous plant can.

But, if none of the shapes European hornbeams come in are exactly what you’re looking for, grab your shears and feel free to make them into any shape you like. The Europeans all do it.

*Disclaimer! As an ISA Certified Arborist, I’m obliged to mention that shearing is not the best way to shape a plant. By decree, the required method is to cut back each individual stem separately using ISA recommended pruning cuts. Also, as an American, I feel equally obliged to mention that the way Europeans treat their trees is entirely up to them. We are a free country and they are too, mostly, and, as such, they can do whatever they want to their trees. 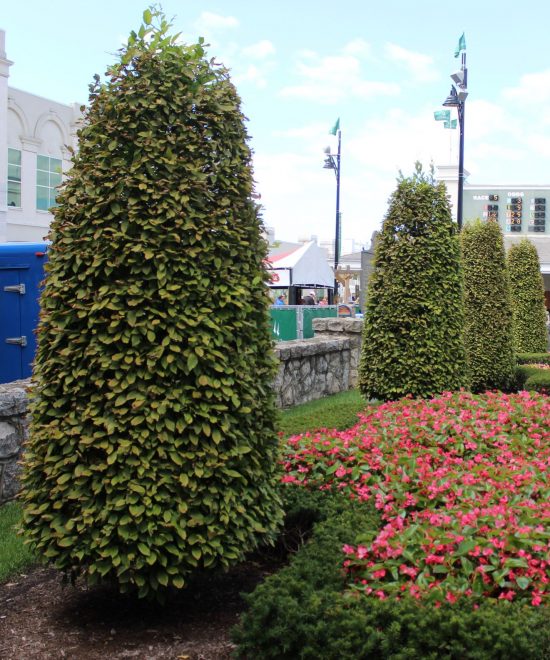 Carpinus betulus (unknown cultivar) sheared to look like a suppository. In America. At Churchill Downs. 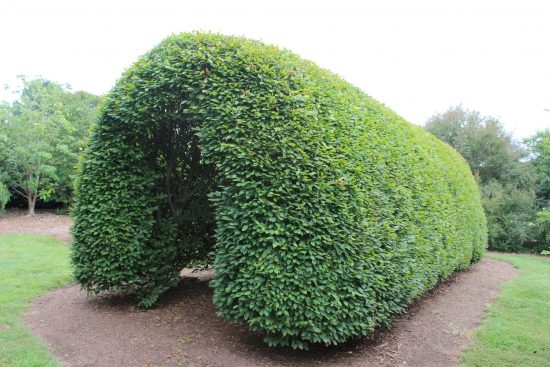 At Bartlett Research Arboretum, Charlotte, North Carolina. Indeed, for reasons no one can fully articulate, this is disturbing to look at. From the outside. 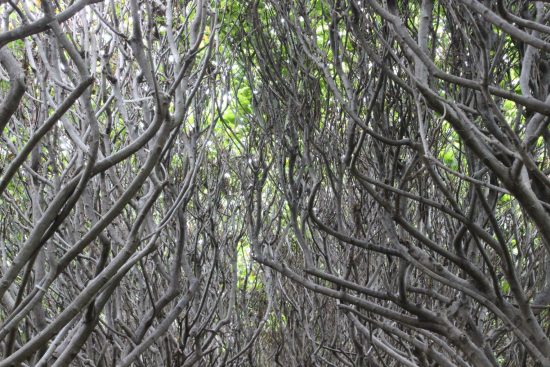 But from the inside it’s magical. 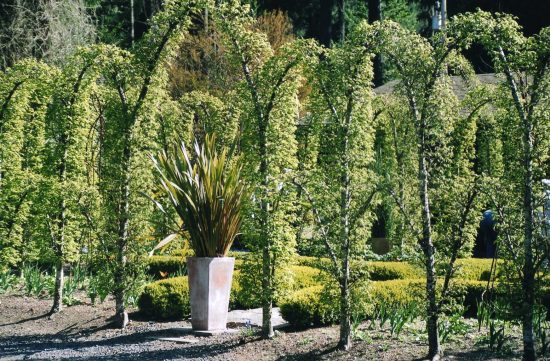 Hornbeams bent to create arches at the potager garden at Heronswood Nursery many moons ago.

In truth, there’s not a lot of difference between the 20 or so hornbeam species, so collecting them might have been a little crazy. Still, I’m glad I did. They’re all really nice trees. I’ve got specimens scattered around the yard and I’ve given several away to friends who are now in my debt and, because of that, try their best to overlook the awful things I routinely say and do when I’m around them. One thing I’ll say about hornbeams that I can’t say about most of my friends, they look wonderful from a distance and even better up close. 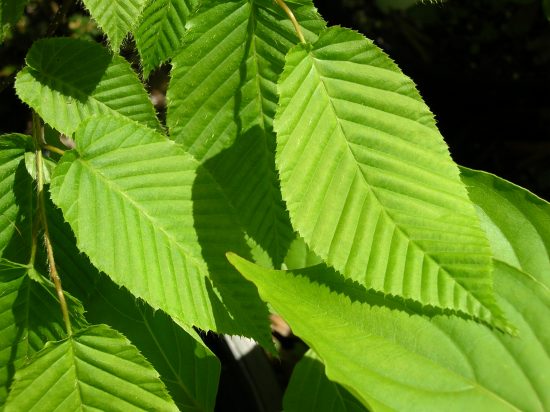 Carpinus cordata (heart-leaf hornbeam) is one of my favorites. Mature foliage above. Opening buds below. 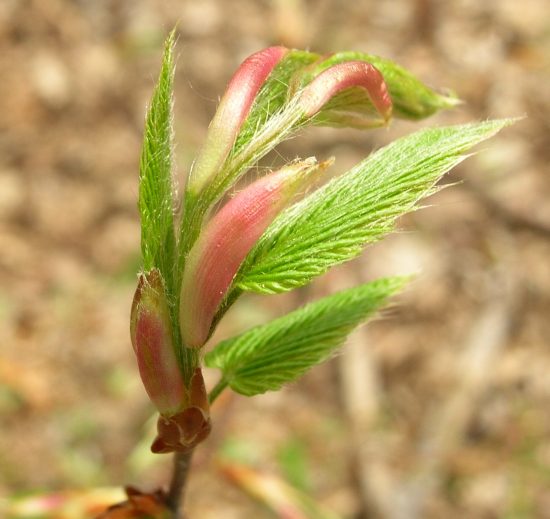 Although I’ve been finding a lot of humor in collectors’ gardens lately, especially when it comes to my own garden and its evolution, I have to admit that collecting plants has been responsible for a huge percentage of my plant knowledge. It has also resulted in friendships with many amazing plant experts and some fun experiments and adventures. Sure, I’ve lost lots of plants. Yes, I’ve removed a lot of plants. But every minute of it has been interesting and fun. 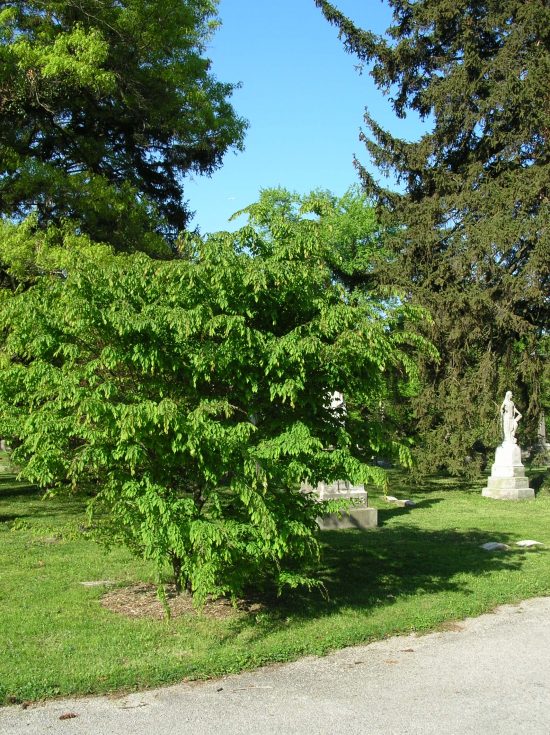 Carpinus japonica, (Japanese hornbeam) tends to be a shorter growing and spreading species. It has elongated leaves and larger fruits, making it the Zone 6 hardy darling of all 14 of the world’s hornbeam cognoscenti. 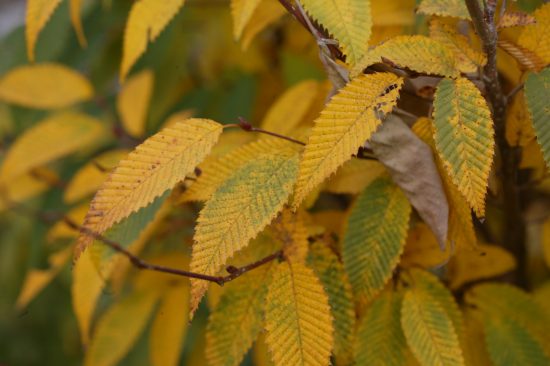 Japanese hornbeam’s Fall color is about like the Fall color of all the other species in the genus. This. 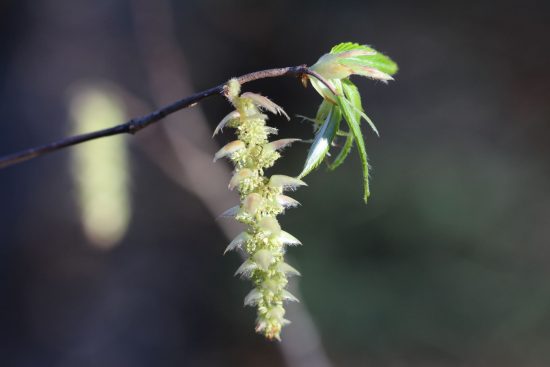 Same as above regarding flowers.

Other hornbeams I’ve grown are C. coreana, a stout, gnarly, shrubby hornbeam, and C. henryana, which I grew from seed. The latter species seems to have more vigor than any of the others and has become a tall, somewhat upright, and very lovely sweetheart. Carpinus kawakamii, which hales from the island of Taiwan and therefore has no right to be hardy in my Ohio garden, is also notable for its excellent bark and zest for life. In my garden, it is threatening to crowd out its neighbor, the equally lovely but less assertive C. laxiflora. One species I gave away is C. tschonoskii, and now I wish I hadn’t. Turned out to be a dark beauty with wonderful red hues in its new foliage. At least I was smart enough to insist that visitation rights be written into the agreement. 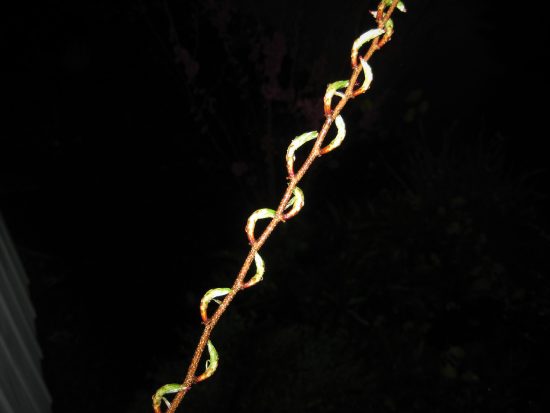 Carpinus coreana is, in my opinion, one of the least attractive species. It’s a gnarly little thing that looks like it belongs in a horror flick, but its fattening buds in the spring are crazy cool. 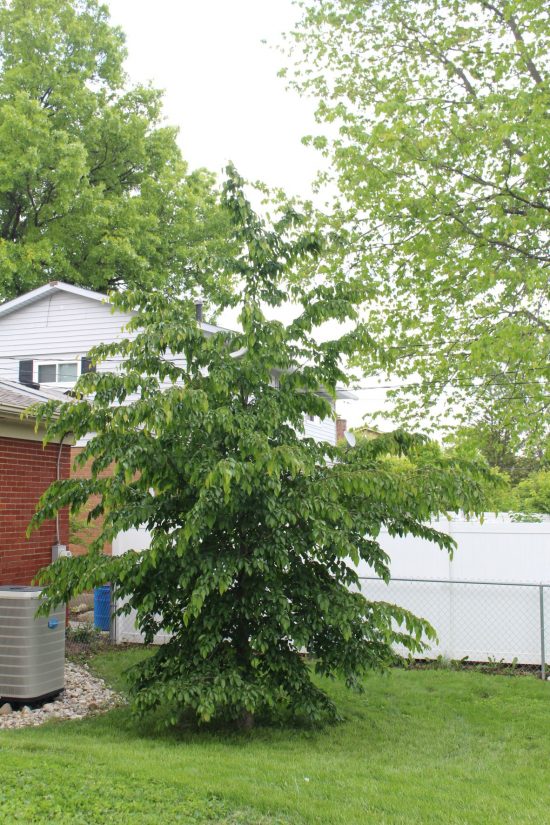 Carpinus tschonoskii in a friend’s backyard. It had been in my overly crowded backyard. We had a devil of a time digging it. The root system we got was sad indeed and we had little hope for it, but it took right off and has shown nice vigor. Someday it’s going to hide that air conditioner, and the neighbor’s house, and the neighbor’s barrel, and the…

I acquired most of these plants back in the heyday of mail-order nurseries. I’m not sure which are still obtainable but if you’re looking for something a little different, these oddball hornbeams all make fine specimens. And don’t ever listen to me when I’m making fun of plant collecting. Yes, sometimes it can lead to a shambolic garden. True, maybe you should corral the collecting impulse just enough to allow for a little design to sneak its way in there. But, no doubt, there are a lot of things you could be doing that are far worse than collecting hornbeams, or maples, or iris, or whatever else catches your fancy, and, who knows, such pursuits might just lead you down a path of adventure, learning, and fun. 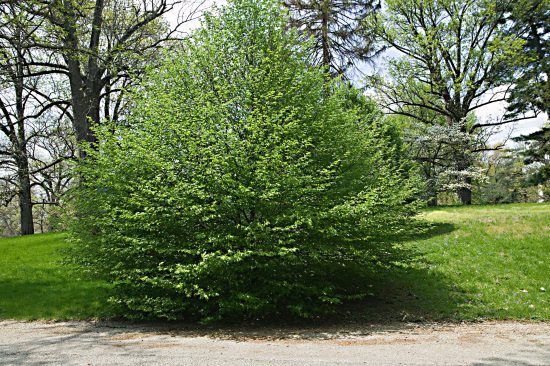 Carpinus orientalis has a naturally formal shape. See what I did there? An oxymoron, sort of. I think. 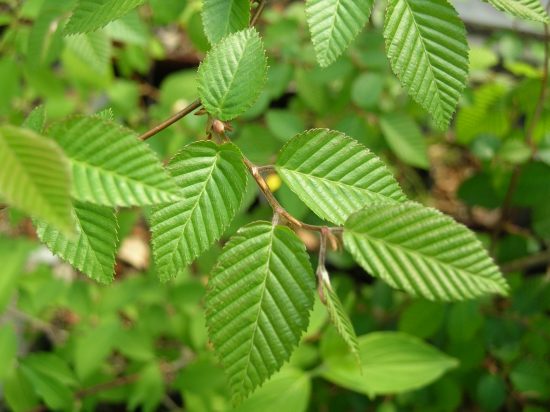