TLDR: Too Long Didn’t Read Culture makes idiots of us all – even gardeners.

It’s difficult to chew and enjoy an aged, grass-fed steak when you’ve been living on a diet of McDonalds cheeseburgers – or a sautéed portobello when you’ve got a freezer full of Quorn.

If you choose the first option(s), you’re going to give your mouth a workout, and delight your tongue with nuanced flavors beyond the salt, fat, acid, sweet, balance that soothes and numbs the palate and keeps us snacking beyond our bedtimes. It’s not the easier choice, but it’s the healthier one.

Similarly, it’s hard to read anything of any substance when you’ve gradually trained your brain to read tiny bits of text; fat, inflammatory headlines; and simplistic solutions – also designed to keep us snacking beyond our bedtimes…designed to keep us feeling full and ‘informed,’ but which ultimately contribute to an intellectual malnourishment both unsatisfying and dangerous.

I’m not throwing barbs at the news sites. It’s everywhere – and gardeners are not immune. In fact, garden writing is a genre with a long, popular history that clearly shows how far we’ve regressed (even as we pat ourselves on the back for moving forward). 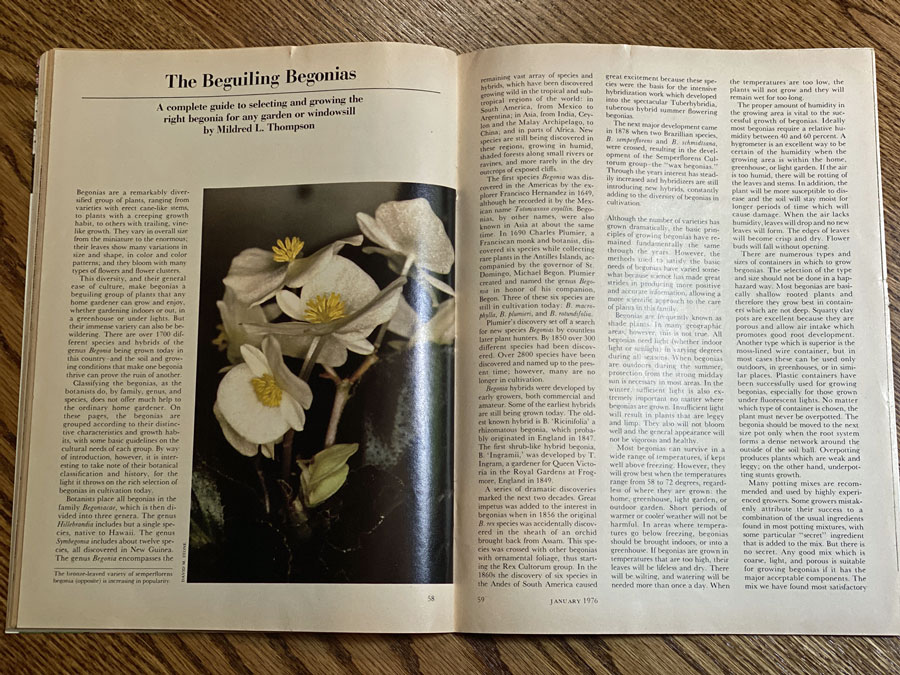 Two of seven in-depth pages from an article on the genus Begonia by Mildred L. Thompson, from the January 1976 issue of Horticulture magazine. 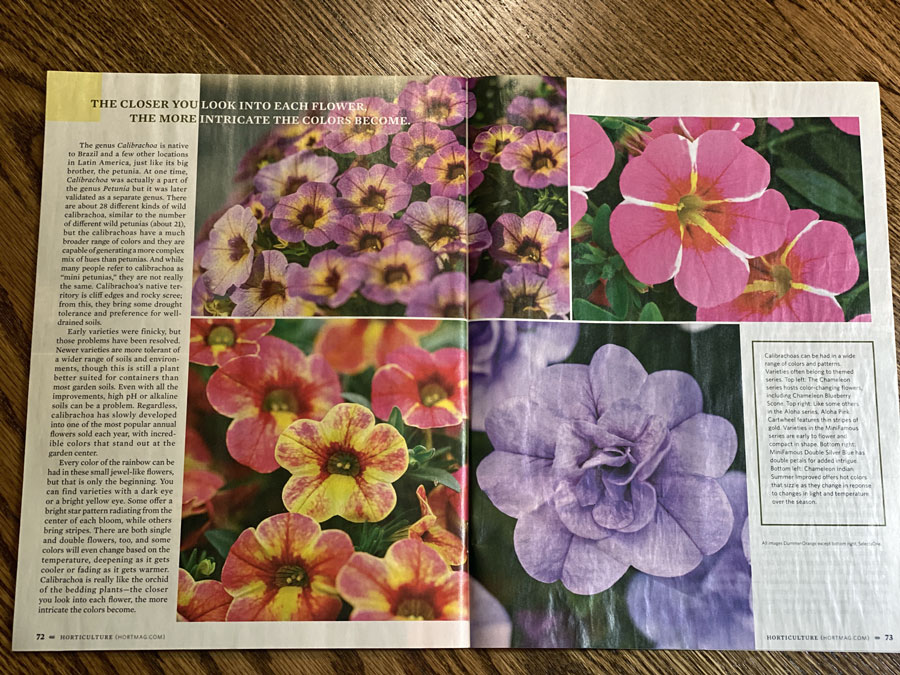 A similar genus-specific article in the November 2019 issue of Horticulture.

Just in from the “We’re Doomed” Desk…

This week, Washington Gardener magazine brought my simmering thoughts on TLDR Culture to a rolling boil when its editor, Kathy Jentz, used her opening letter to gently defend her new book against some online reviewers. Apparently, they couldn’t handle more than 4-500 words of text on 101 topics related to urban gardening, and termed the snippets “too long.” The topics were separated, I might add, by big, colorful photographs.

Authors rarely engage with critics, lest they go mad or appear too sensitive, but I recognized the frustration which led to her letter. This is a book co-authored with Teri Speight that I reviewed here last week; and which – ironically – I might have accused of not going deep enough, had I chosen to throw that punch.

Why didn’t I? Because I’m painfully aware of the tiny space between rock and hard place that the co-authors inhabit: between an audience seeking tidbits, and publishers seeking an audience. I’ve been there myself and it’s a challenging space to negotiate. For both authors and publishers.

And yet it appears that in their desire to educate and inspire readers (particularly beginners) on the many facets of urban gardening – and do so without overwhelming anyone – they didn’t go shallow enough. 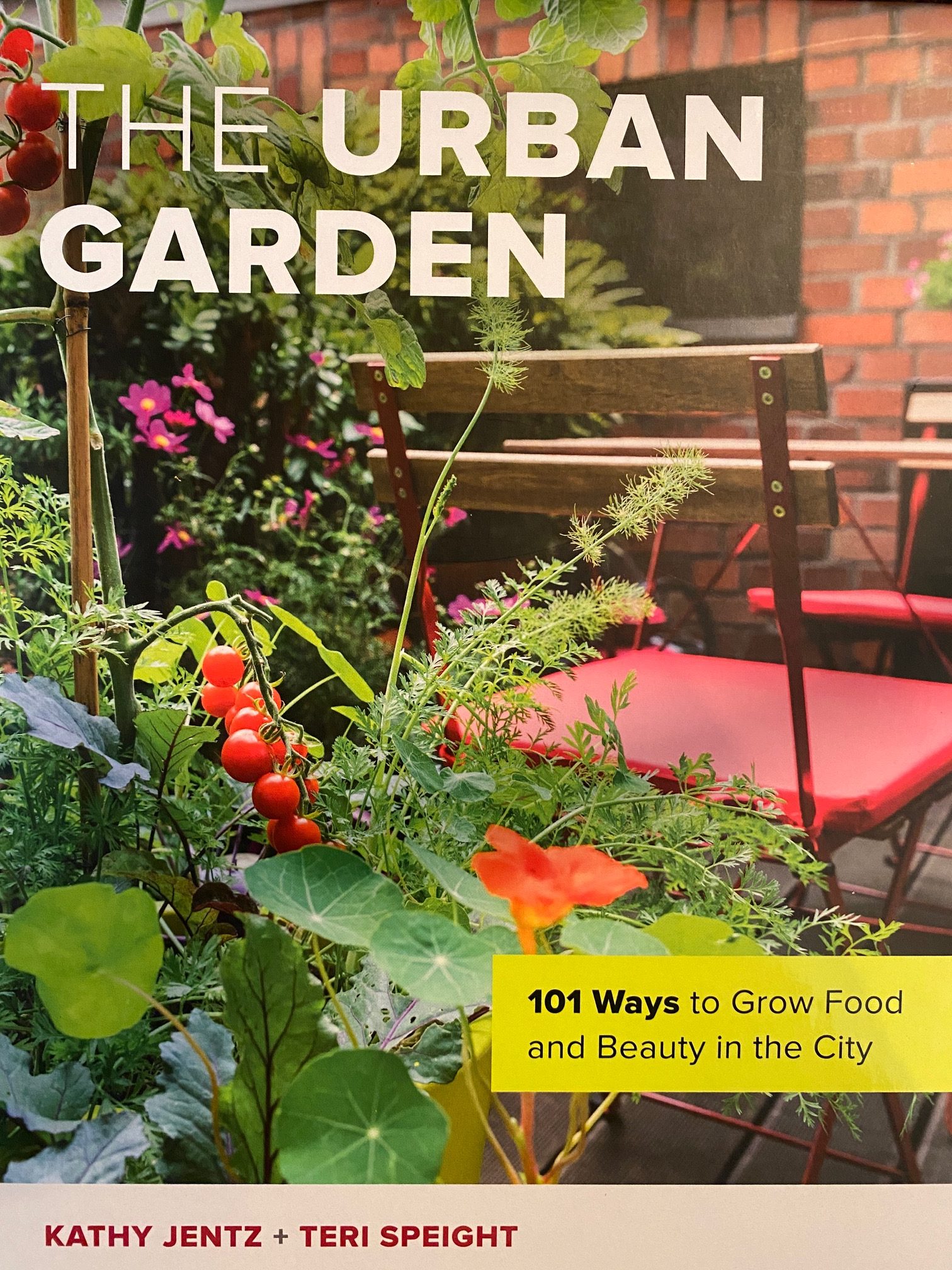 500 words. On Cool Season Edibles. Or Layered Plantings to Maximize Harvests. Or Raised Beds and Square Foot Gardens.  You have GOT to be freaking kidding me.

Mel Bartholomew’s original Square Foot Gardening is 347 pages. With scary charts, and confusing tables, and line drawings, and…wait for it…black and white photos!  How did over a million gardeners in the eighties and nineties manage to wade through all that informative text? 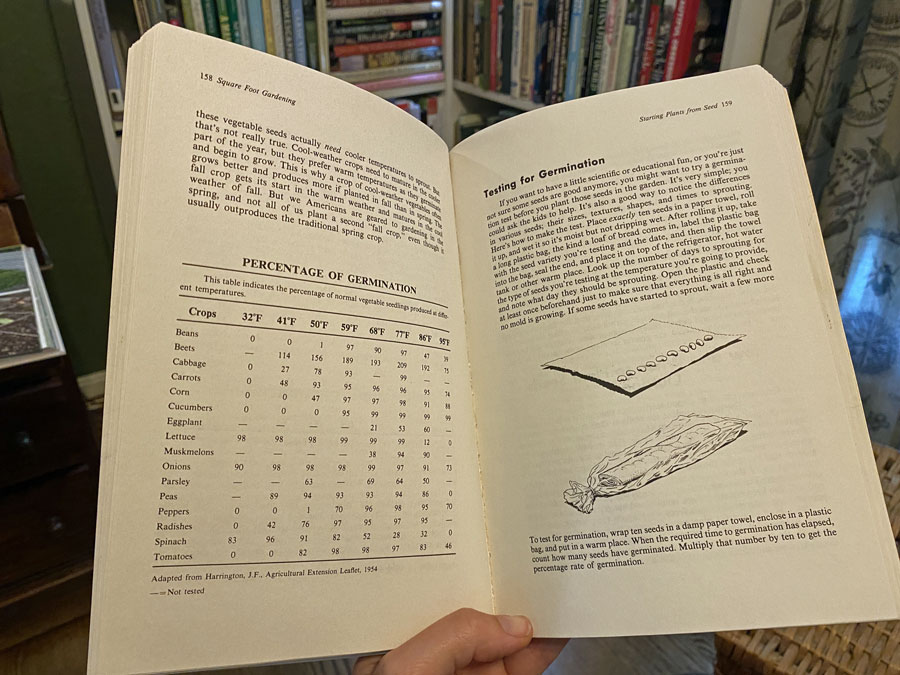 Just some of the ‘too long’ information in Mel Bartholomew’s Square Foot Gardening [Companion to the PBS Series, 1981]

Sharp, succinct writing should be the goal of all writers – even those who love to play with words. And there’s a lot of terrible writing out there fully worthy of contemptuous hipster terms. Most of us could lose a hundred words and never feel it.

But at the same time, the definition of “succinct” is changing. In a new TLDR Culture, we are conflating word count with wordiness, dismissing it outright, and looking for the Cliff Notes instead.

We don’t want to chew our food.

For those who have never come across the initialism TLDR (and subsequently felt their soul die a little bit that very first time they looked it up), let me take a moment to get us all on the same page, as I think it’s relevant to the place in which we find ourselves now. And where we’re going.

For the TLDRs out there, I’ll meet you at the end, with a [short] conclusion.

In 2003, TL;DR, or “Too Long; Didn’t Read” got its first entry in the Urban Dictionary. At first, it was used in internet chat forums to snarkily disparage the long rambling comments of other users that could be summed up in one sentence, such as: “TL;DR: It’s 3am and I’m tired, socially inept, and angry at the world.” Or “TL;DR: Your team sucks.”

Gradually TL;DR was used by posters themselves on forums such as Reddit – where a shorter summary of a long post was offered for readers who couldn’t be bothered to read the entire thing, and which begged the question of why the poster bothered to write it in the first place.

But these things tend to wander out of their caves eventually, and over the next two decades TL;DR made it into common internet parlance – in comments at the end of broadsheet editorials, or tacked to the front- or back-end of articles that dared to delve further than Google’s most recent proclamation on Search Engine Optimization (SEO) length.  Some very clever people used it to sum up great books, with hilarious results.

A quick snippet of one of the funniest things I’ve read this week. Except it’s only funny if you’ve actually read these plays. There’s much more of Joshua Engel’s cleverness with Will’s plot lines at https://tinyurl.com/5n9yrpac

New writers wondered if they should start their essays with a TL;DR. “People are lazy, for the most part, and I like to accommodate.,” says one on Quora, breaking my heart with her acquiescence and realism.  TL;DR was eventually shortened to TLDR – possibly because the irony of using semicolons in a hip initialism to disparage something that by its nature probably used them, was just too cognitively dissonant, even for those who specialized in such things.

Dumb and Getting Dumber

At the same time, Corporate Media (already operating at a 10th grade reading level) changed to attract very distractable eyeballs. Short snippets, inflammatory headlines, and immediate links to more digestible snippets were offered to those who managed to stop browsing the endless social media foodcourt feeds. We began to add the approximate time it would take you to read an article at the beginning, as if to apologize for the time it was wasting. [Hopefully you’re coming to the three-minute mark on this one.]

We – all of us – became lazier readers. And slowly, a culture emerged which didn’t just apologize for the vice, but lauded it in a voice laced with contempt.  Faced with a long article truly worth reading, the premise could shift: the writing was probably bad, not the reader. 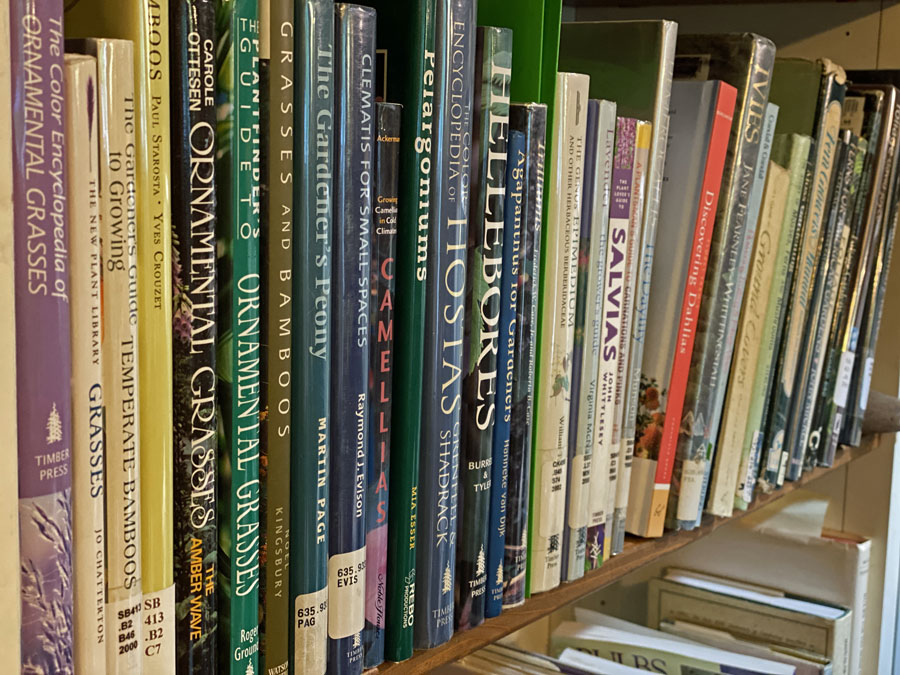 If 500 words is too long on a single topic, one can only imagine how many minds are blown up by entire books devoted to a specific genus or genre of plants.

It’s that Old Chicken and The Egg Thing Again

“People want to read books, but they don’t actually want to “read” them.” says Jentz in the letter that started this Rant. “Skimmable text with lots of lists, subheads, photos, and bullet points are how we read online, so now that is how we want to digest our books…”

We’ve put ourselves on a steady diet of this for too long. The publishers are responding. And now, those who can actually be tempted to give up a screen full of snacks to make a foray into books require the tiniest of crumbs – lest they choke when they fail to chew.

500-word snippets on 101 topics is “too long?” Call it realism, hip, attitude, practicality…a new generation…. a new paradigm… Call it whatever you want, but you sure as hell can’t call it progress. My very best wishes to Jentz and Speight and all fellow authors and publishers as we try and navigate this new marketplace with grace and integrity. -MW