We recently visited some friends for an amazing supper. And were touched to be told, when we admired their sitting room, that they had removed their television so that it would look better.

It’s the kind of thing I’d actually do myself for visitors, but I don’t usually have the bottle to say so. I’m not sure why. I suspect I hope to give the impression that our house always looks so clean, tidy and, hopefully, attractive. Which, of course, is a great big lie. We actually only have visitors in order to motivate ourselves to get the vacuum cleaner out. I suppose too, we like to appear casual and spontaneous. As if….

The same kind of pretence applies when we open the garden, of course. We don’t leave a hose lying around – they’re not particularly pretty. 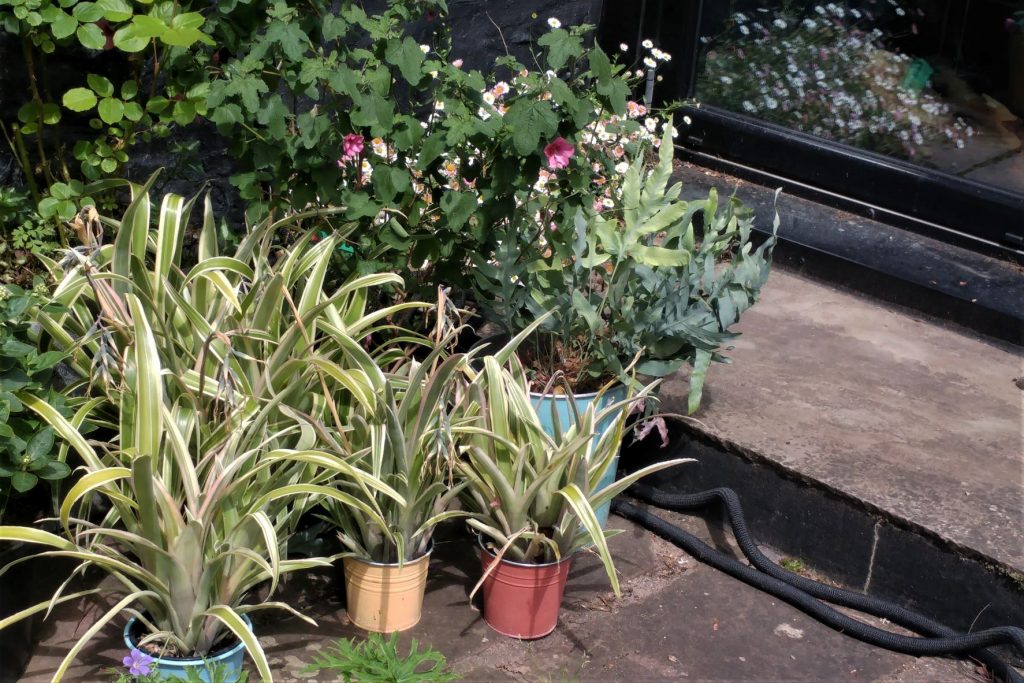 We clean the water in the pools – in the first pool by raking off the algae, which handily brings out some of the  duckweed along with it. 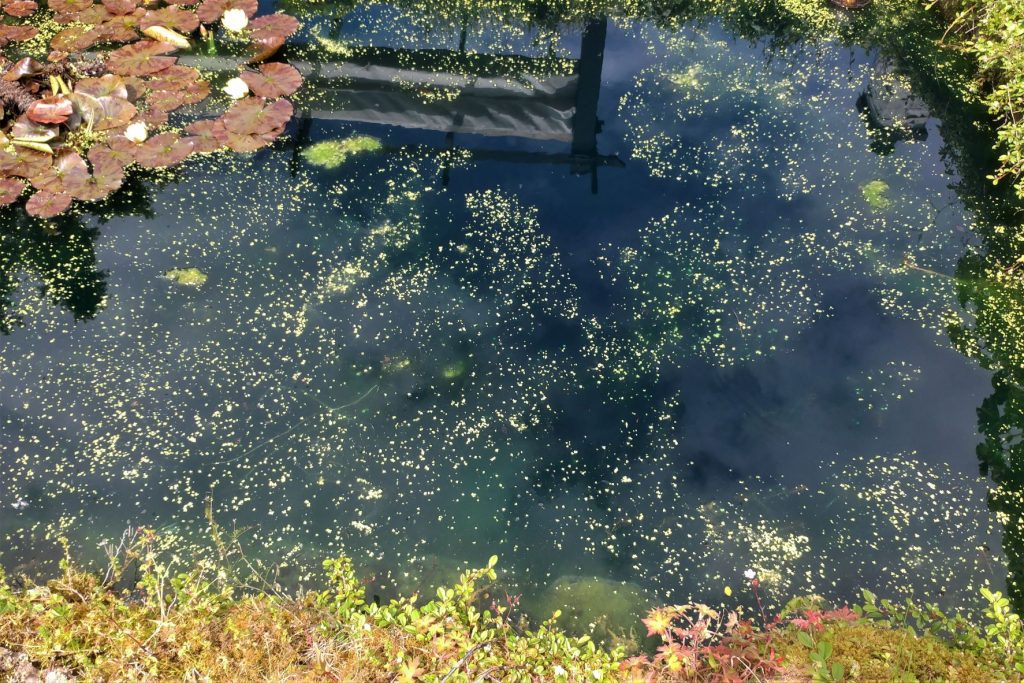 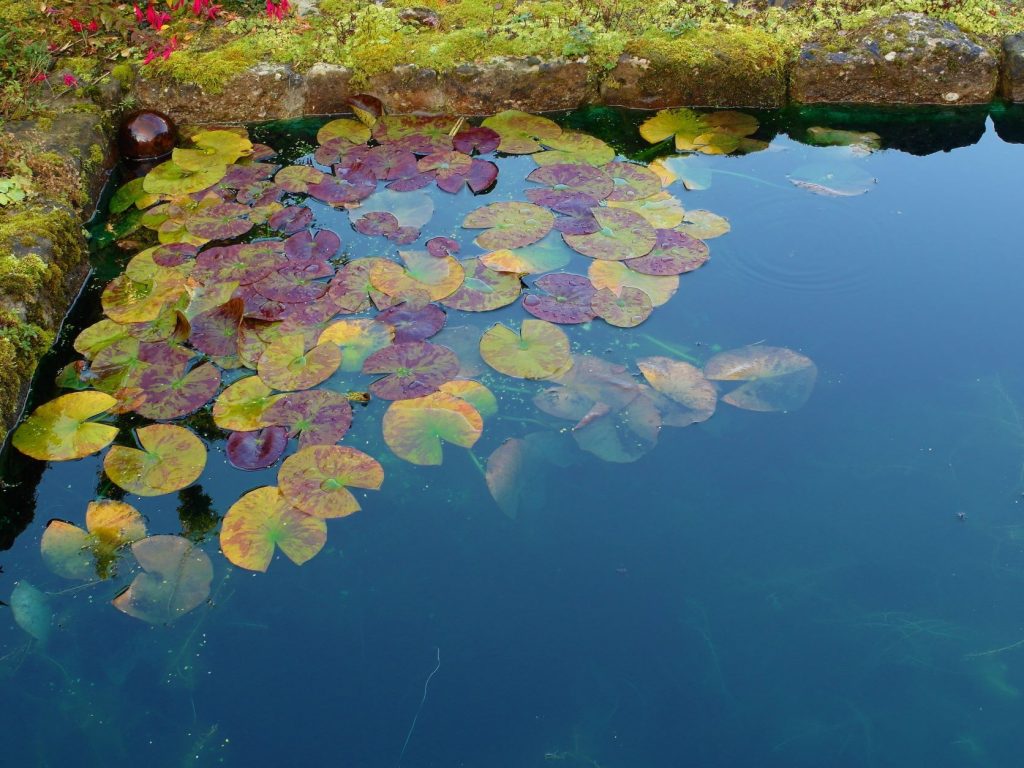 How did we get it this clean??!

With the other pool – the Reflecting Pool – the task is to remove the dead flies, pollen and leaves which clutter the otherwise beautiful surface. 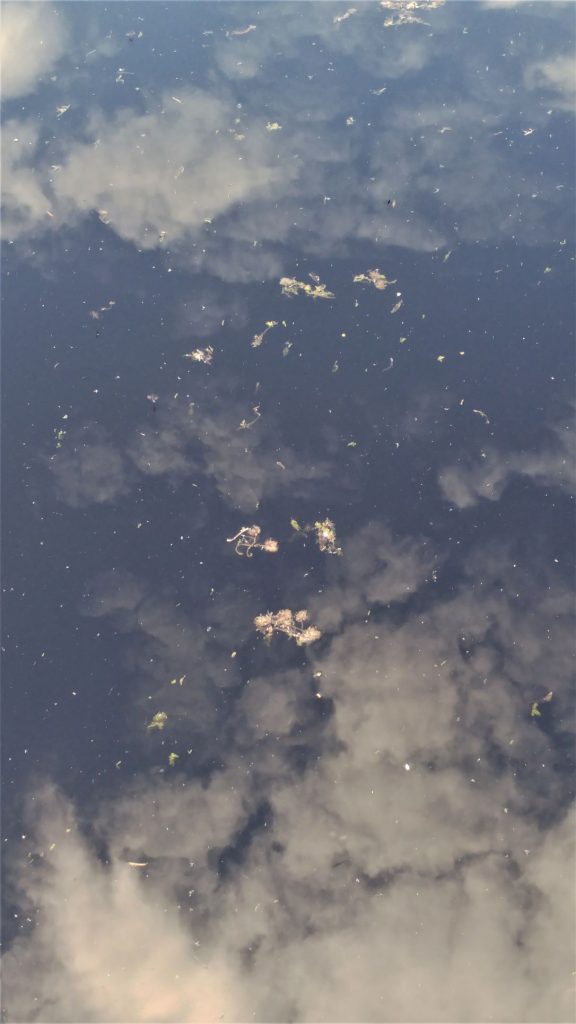 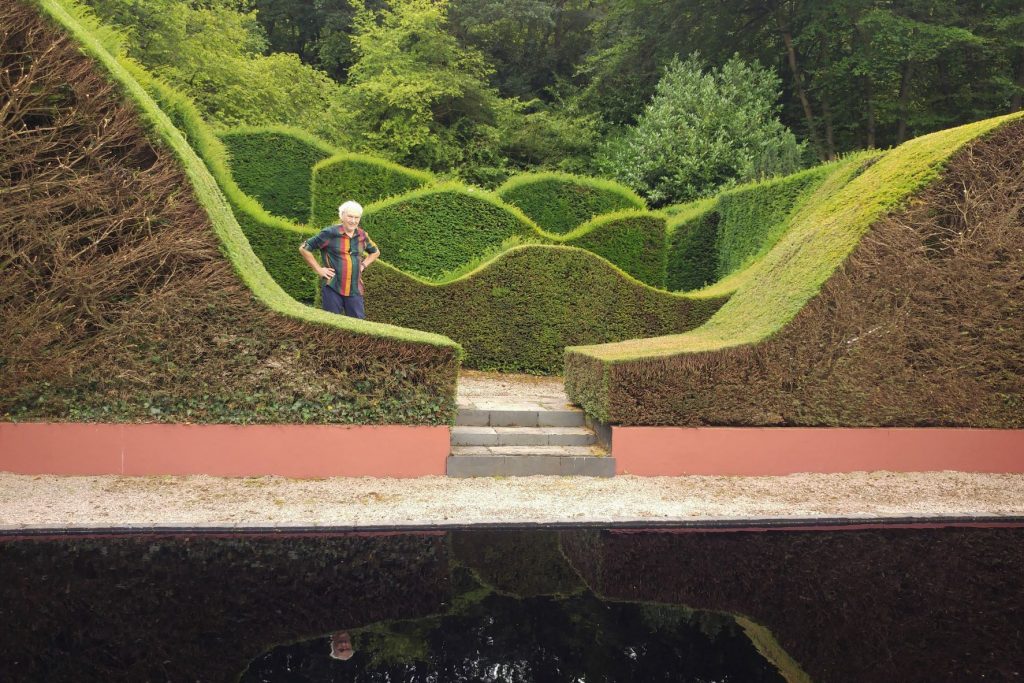 The water should look more like this.  The hedges should also be cut, and we dedicate major resources to that task. The face of the yew hedge here is another story, which if you’re into schadenfreude you can read about here.

The same task applies to the birdbath, which must also be topped up. And all of them may need blacking up. That means mixing up some black food dye and adding it to the water. You get black fingers but the process is delightful, watching the darker colour spread across the water, adding great allure for those of us who hate greeny grey pond water. A common sight in gardens, sadly. 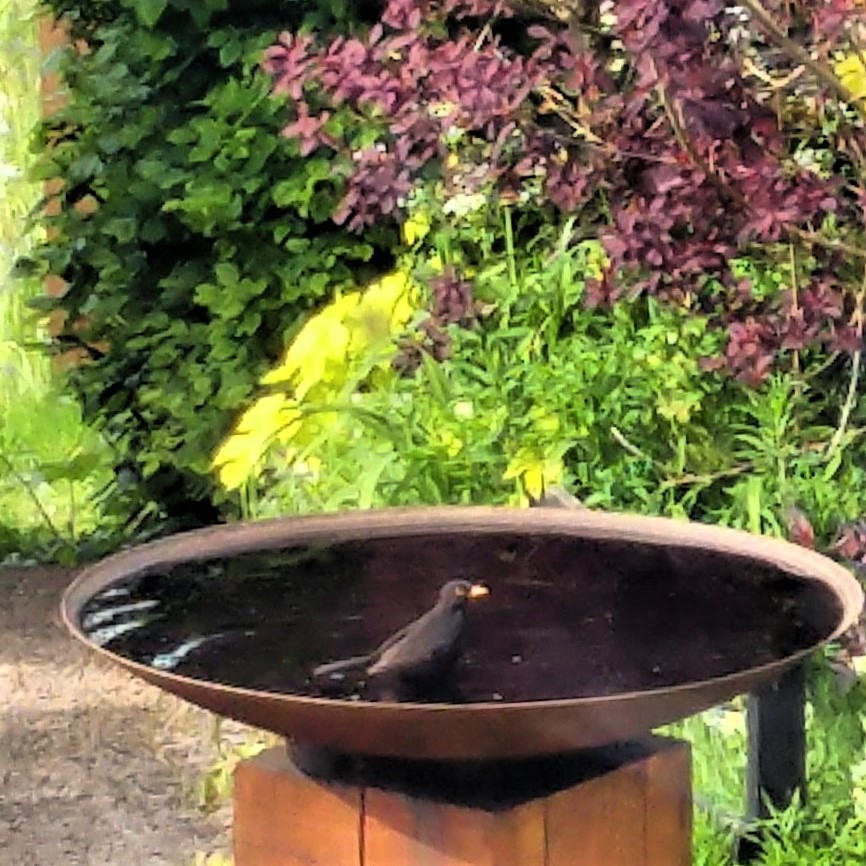 The blackbird obviously likes it being black.

And we may do a little judicious weeding …(cleavers)

We may even mow. 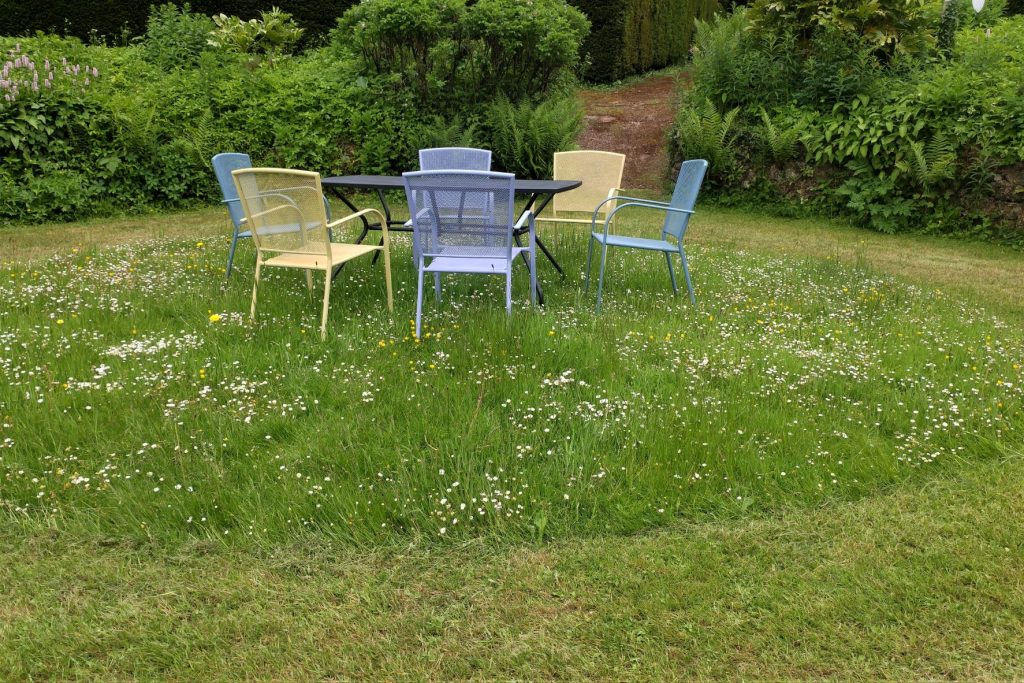 We may clear up any tools or wheelbarrows which are cluttering the place. Though I do seem to remember a certain well known garden writer saying she would leave some such things as they communicated something about the garden work. That it’s not done by fairies in the dark of night, I suppose.

Of course, as we know, to our shame, the extent of the tidying and creating a good display depends a little on the status of the anticipated visitor. Old friends, frequently encountered, may get a perfunctory dust indoors and outside perhaps nothing much extra at all. Unless, – and here is an added complication, they are coming for a special occasion. Their birthday perhaps. Or for a special sweated over supper by way of return for similar at their hands.

Don’t know what we’d do if the queen was coming. But we don’t seem to need to worry about that. 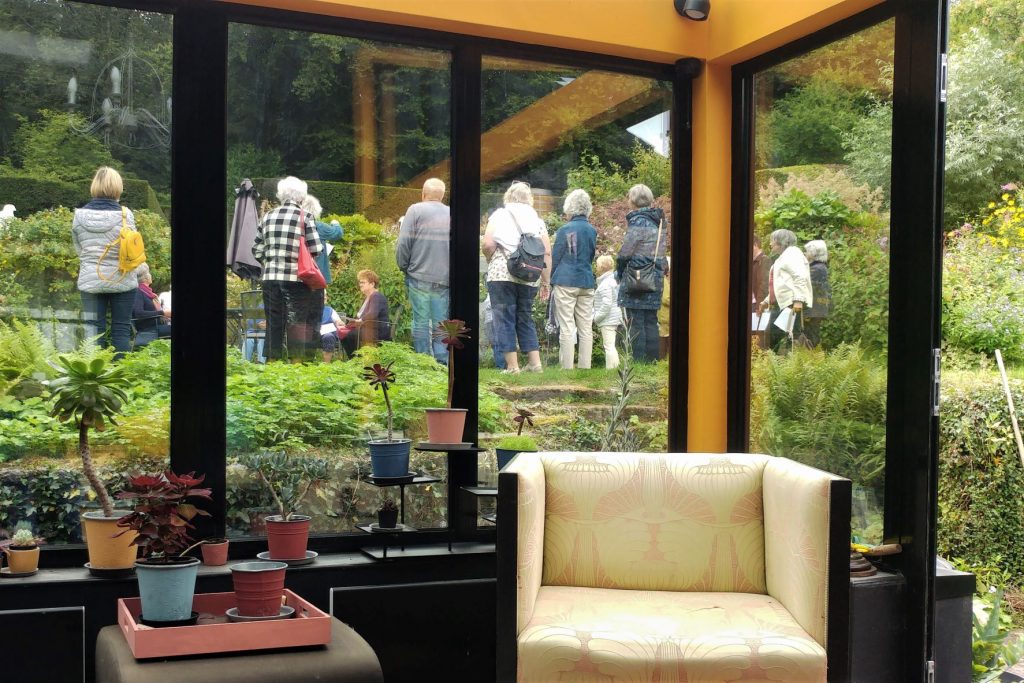 Charles just visible to the keen eyed, (in blue, gesticulating) giving an introductory talk to a group of visitors

Paying visitors get all most of the garden tweaks. And we desperately hope it won’t rain, but that seems to be still out of our control.

Having paying visitors has a bonus effect, which is that when they are not coming the garden is suddenly ours again, and that is a joy. There are even some parts of the garden where we grow things predominantly for ourselves – we don’t open in early spring, for example, so we have special times visiting spring plants which are just for us. (and friends) 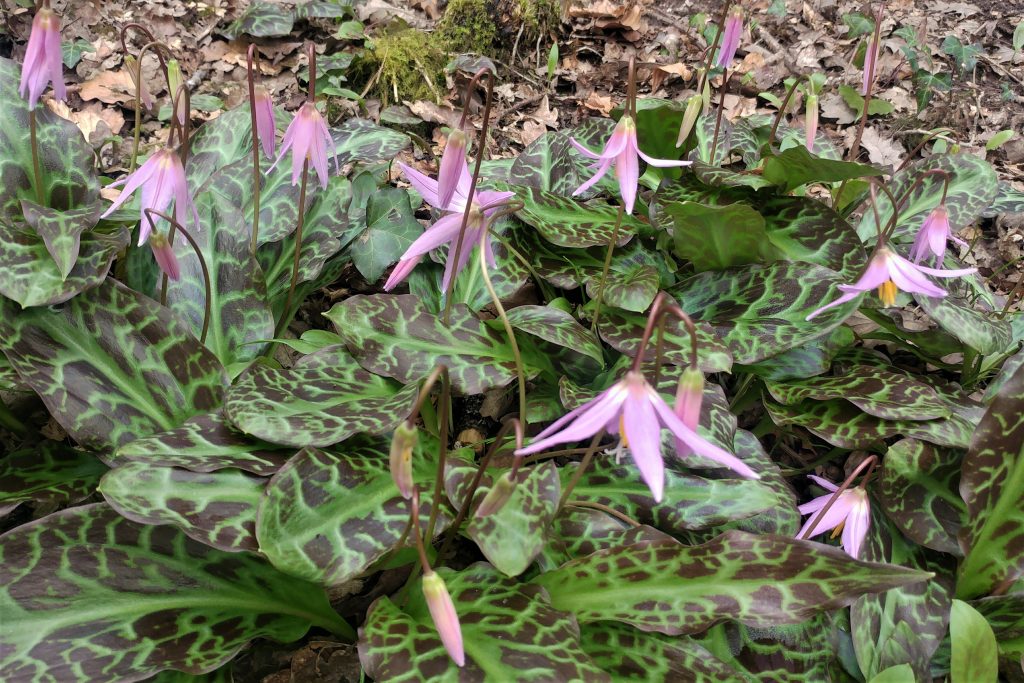 Erythroniums just for us.

Then there is a sudden question when we close the garden in October about what motivates us then to weed or tidy. It’s certainly not the Telegraph’s monthly injunction: ‘Plant and TIDY‘ !

I know that those of us who don’t open their gardens to the public must regard it all as a terrible demand of time and effort. But when the garden is really shining it does seem right that we should share it. Even if it does mean doing a little sprucing up at times.

And do remember, you must always go and have a pee when you visit people – they will have cleaned the bathroom specially.