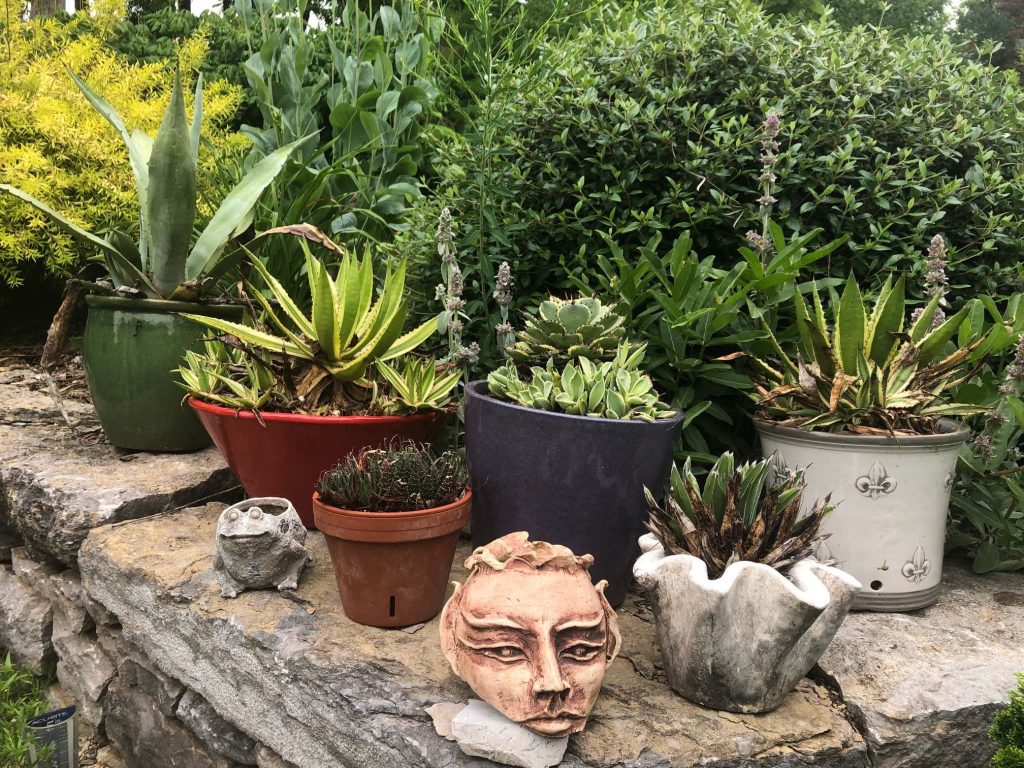 Heat arrived in Kentucky last week. I knew temperatures in the 90s would arrive sometime but hoped climate change would cut us some slack until July. Climate change is cutting very little slack, but we had a lovely spring with warm days, cool nights and sufficient rain. I don’t like it hot, but there are plants in our rock garden that don’t sulk as much as I do on hot summer days.

The National Weather Prediction Center in College Park, Maryland, urged 107.5 million Americans to stay indoors on June 14th. Not a bad idea. It was 96 (36 C) in Salvisa. The heat index, which couples ambient heat and humidity, made it feel like 106 (41 C).  Feels like Death Valley—hot and dangerous. 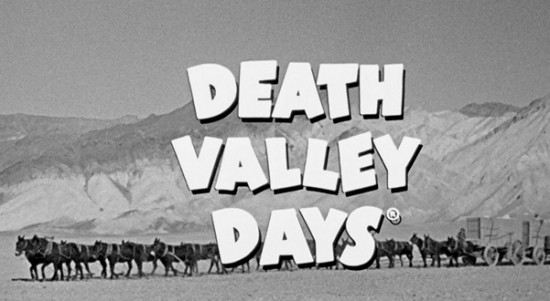 It has been dry the past ten days, also. Not bad dry but worrisome enough that I’ve begun carrying five-gallon buckets around to water newly planted trees that are out of reach of a hose end. Elsewhere, I spot-water around the garden where I know there are especially thirsty plants. Wilting plants are a dead giveaway. 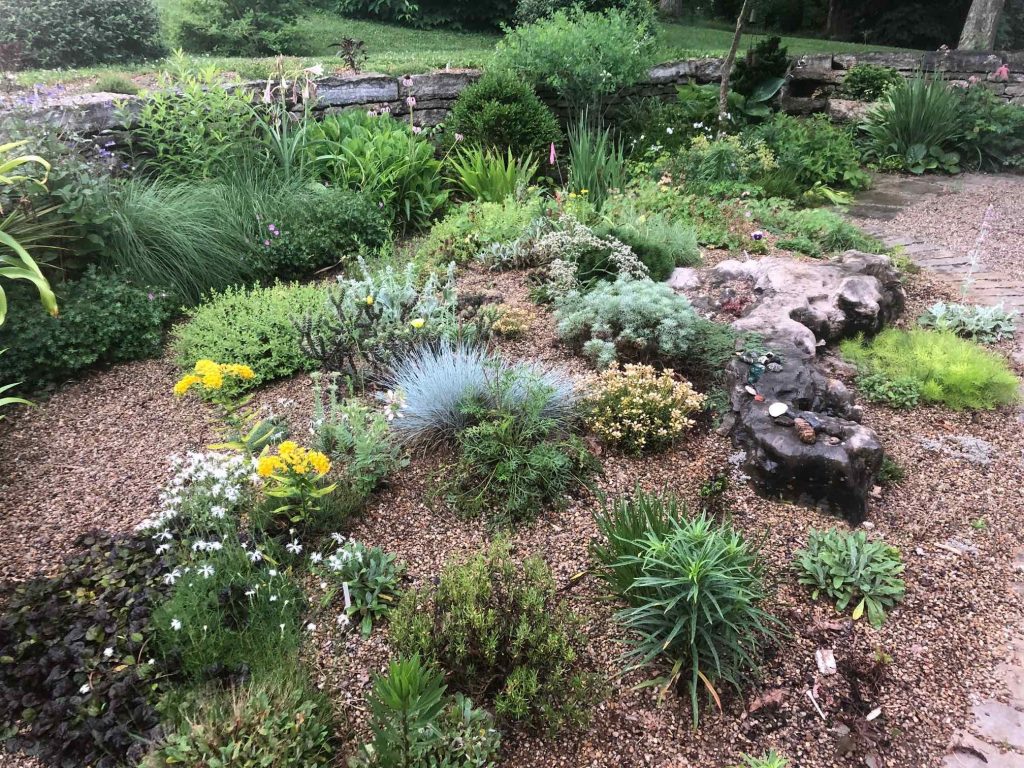 I am expecting a call from the kind folks at the North Mercer County Water Department. In past dry summers they have called and said, “Mr. Bush, your water bill is high this month. Do you have a leak?” They’re beginning to understand: I have a garden. “How’s your garden growing?” they now ask.

The path forward is rocky until autumn. I can usually stay on top of weeds, but there’s no garden chore I enjoy less than dragging hoses around during a prolonged dry spell—week after week. Heat and humidity fray my nerves day after day.  I picture the soldiers at the castle of the Wicked Witch of the West singing the doleful “Oh-RE-Oles, OH-Rioles.” 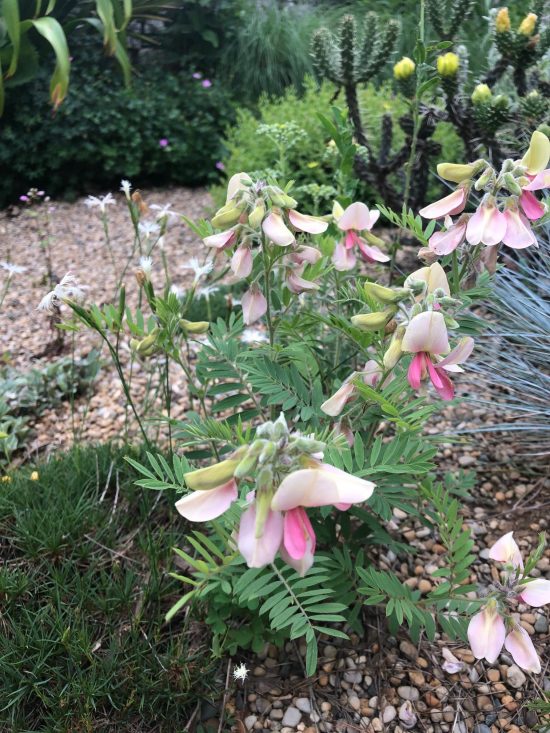 Goat’s rue (Tephrosia virginiana is a sweet little legume. Mine stands a modest 9” tall. Native to dry, open woods in eastern USA. The plant was once fed to goats but the roots contained poisonous rotenone. Goats rued the day. 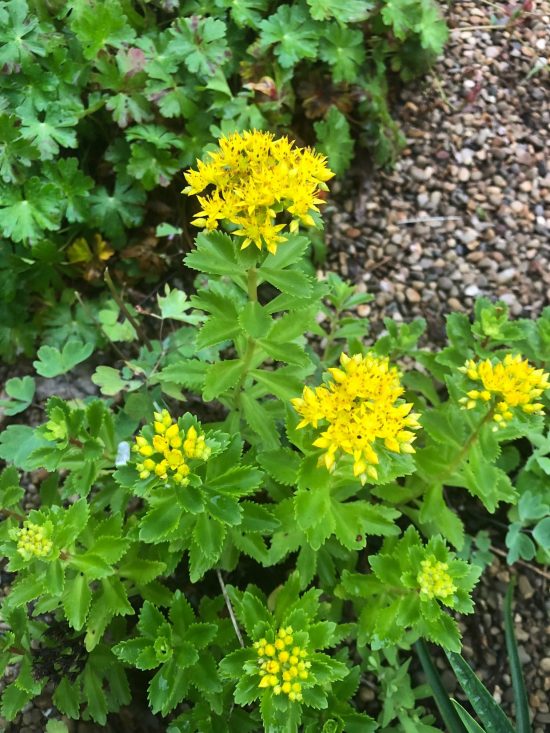 I wild-collected Phedimus (Sedum) aizoon var. scabridus, in Sichuan in 2001, for my employer, Jelitto Perennial Seeds. It’s the only species I still grow out of over 200 seed accessions I made that September. (I confess: I don’t have the collector’s eye of Dan Hinkley or Scott McMahan.) Georg Uebelhart, my dear friend and former Jelitto boss, emailed this week. “This is a very good form but Sedum aizoon is not selling so much at all.” Georg tossed me a bone and let me down easy: “We’ll keep it for future activities.” 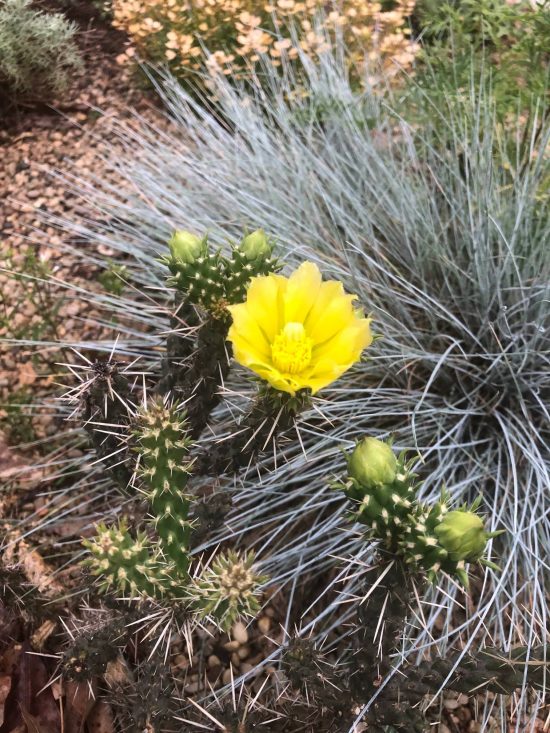 The western USA whipple cholla, “a cold desert dweller” at elevations from 3,500’-5,000,” produces dried fruit that can be ground into a flour, mixed with ground cornmeal, and made into a mush. Is it better tasting than grits? 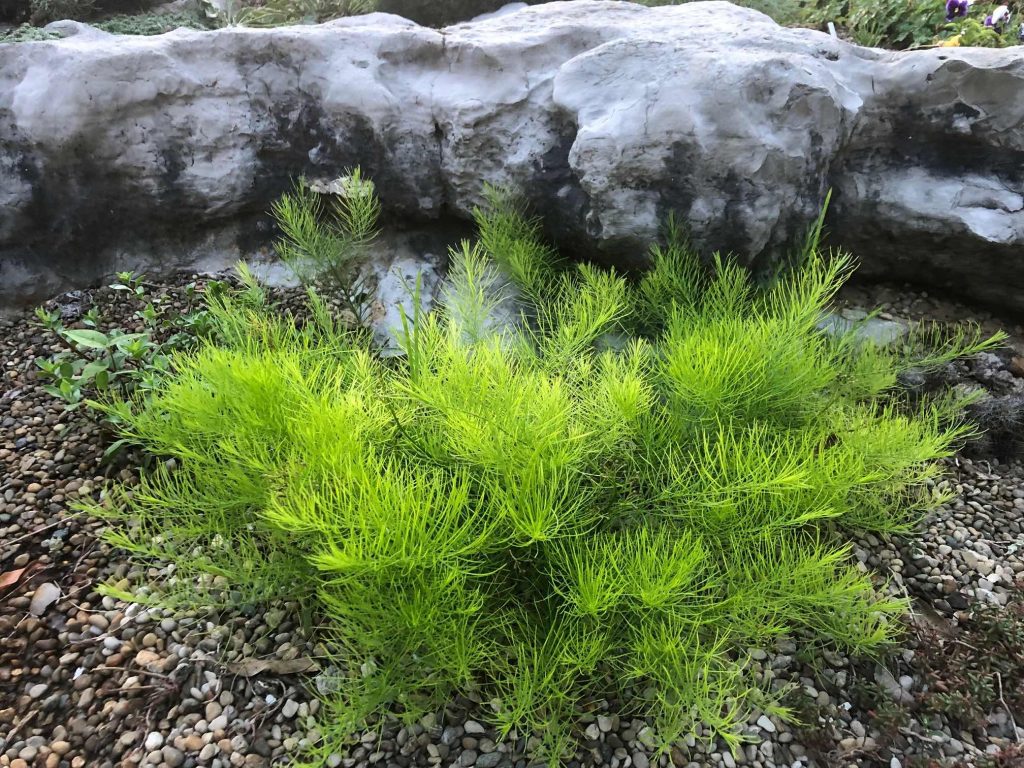 Amsonia ‘Georgia Pancake,’ similar on a first glance, to the popular Amsonia hubrichtii, but lower growing —9″ tall and 18″ wide. Found by Bob McCartney in the sandhills of central Georgia. 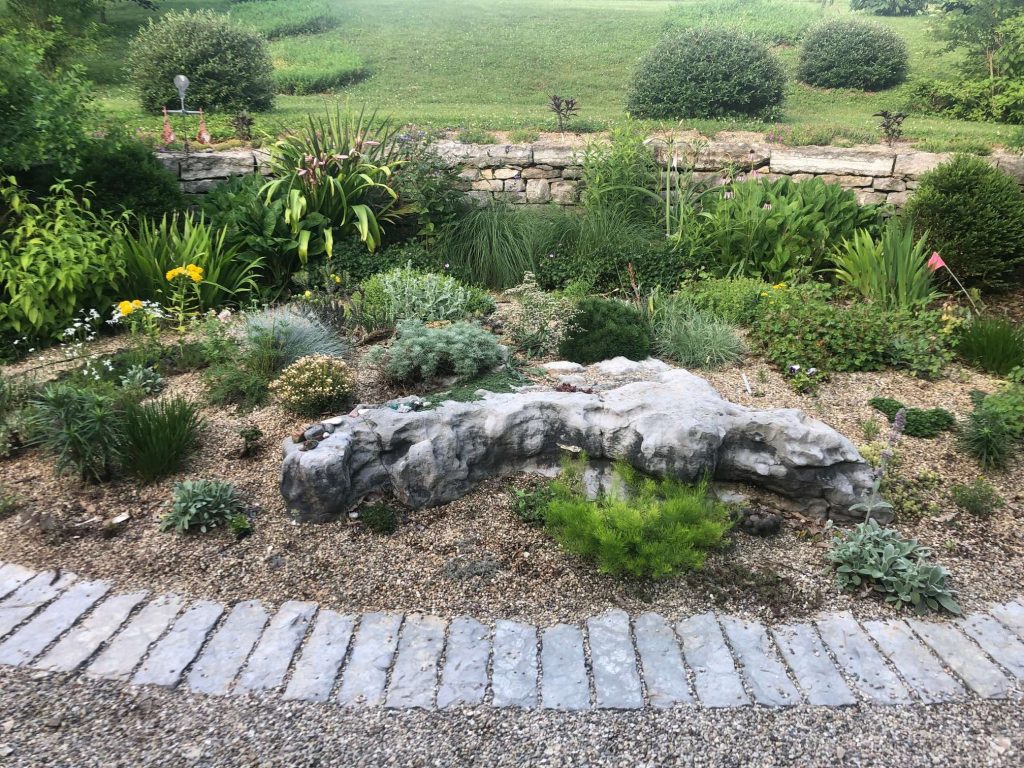 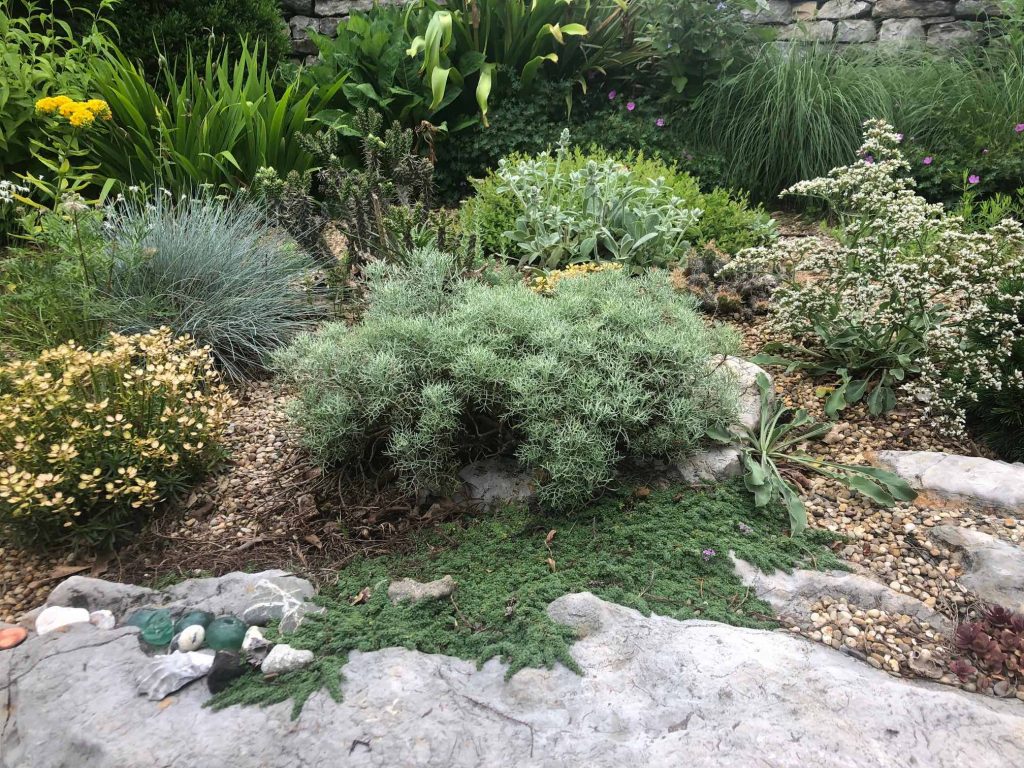 We’re getting a break in the weather this Father’s Day. Temperatures cool down—sort of—to the low 80s (27 C) before heating up again on Monday with the temperature expected to reach 100 F (38 C) on Tuesday’s Summer Solstice.

Take a load off this weekend while you can.  Make time for porch sitting with the ceiling fan on high. Take a nap in a hammock in the shade.

There’s no relief next week. Get your garden chores done at sunrise.