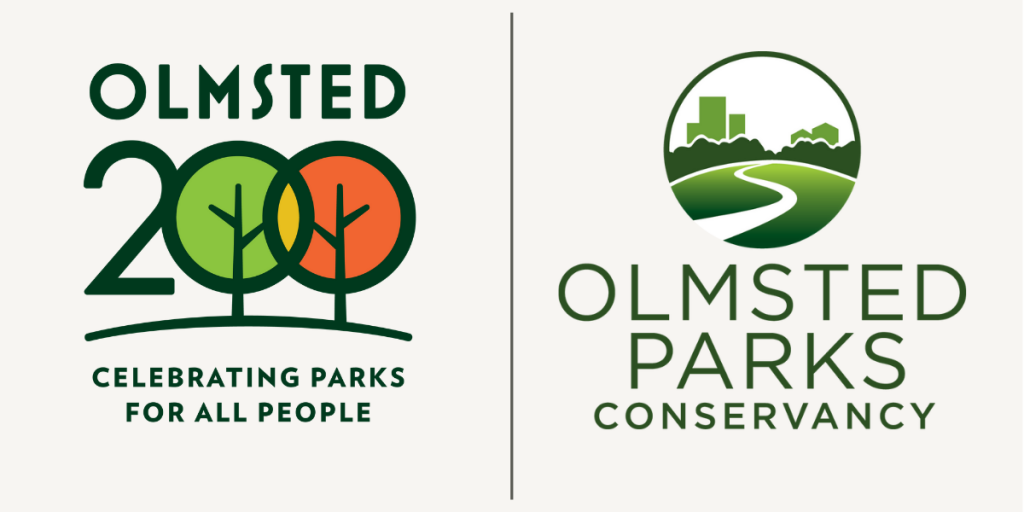 There have been FLO parties in Buffalo, New York City, Boston, Baltimore, Atlanta, and more the past few weeks. My hometown joined the fun. Louisville celebrated Frederick Law Olmsted’s (FLO) bicentennial on April 26th. Olmsted, in 1891, visited a rolling pasture and woodland, bisected by Beargrass Creek, that became the 337-acre Cherokee Park.  FLO’s Louisville visit, near the end of his career, would be his last but it was auspicious. The city’s Park Commissioners made their annual report in 1897. “Louisville was unquestionably the most unique and beautiful park sites of any city in America. This is the expressed opinion of Frederick Law Olmsted, than whom no greater authority lives.”

Olmsted Parks Conservancy C.E.O., Layla George, welcomed guests to Louisville’s birthday celebration. She said, “Frederick Law Olmsted was invited by a group of Louisville community leaders to design not just a park, but a park system. Over the span of 45 years, beginning in the late 19th century, our city invested money to purchase property, build bridges, roads, playgrounds and ball fields, and plant thousands of trees to create this magnificent park system we have today—one of only 4 Olmsted-designed systems in the world, and the most fully realized one of them all that includes 17 Olmsted-designed parks and 6 parkways.”

I envision a grand parkway of picturesque type…reaching from the heart of the city into the rural scenery of the suburbs. –FLO

Each of Louisville’s three principal, and larger, Olmsted parks have distinct characteristics, from rolling hillsides and meadows in Cherokee, to Shawnee’s Great Lawn and river vistas, to Iroquois’s forested slopes and spectacular overlook. Parks such as Bingham, Tyler, Victory, Boone Square, and Chickasaw are examples of smaller paradises. 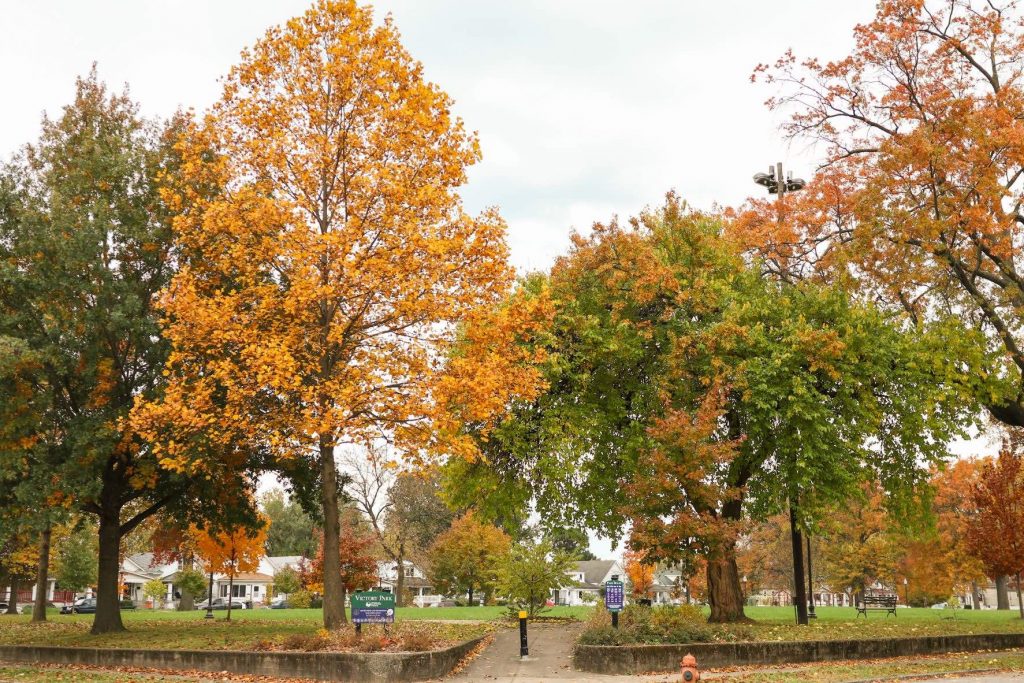 Layla was at the Loeb Boathouse in New York’s Central Park where FLO’s parties had begun a few days before Louisville’s. Adrian Benepe spoke. Benepe was the former New York City Parks Commissioner, ran the Trust for Public Land, and now oversees Brooklyn Botanical Garden, another Olmsted jewel. He said, “We think we’re really special when it comes to Olmsted parks. We have Central Park, Brooklyn’s Prospect Park and a few other great Olmsted-designed parks. But if you think New York is special for having these Olmsted Parks, we’ve got nothing on Louisville.” 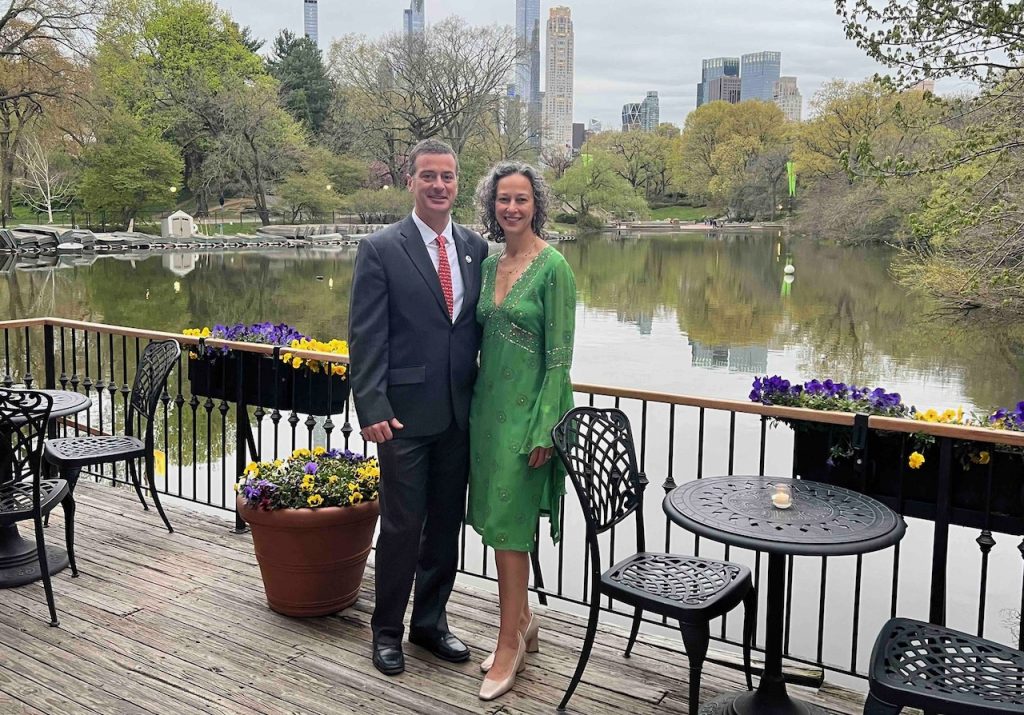 Olmsted and Calvert Vaux partnered on the design and construction of Central Park. They drew their inspiration from Birkenhead Park in Liverpool, England. Vaux was the principal designer and Olmsted the logician who supervised construction. Urban Parks came into American consciousness with Central Park.

We want a ground to which people may easily go after their day’s work is done, and where they may stroll for an hour, seeing, hearing and feeling nothing of the bustle and jar of the streets, where they shall, in effect, find the city put far away from them. –FLO

Olmsted came to his calling after working as a mercantile clerk, sailor, farmer, traveler, journalist, social reformer, and Executive Secretary of the Union Army’s Sanitary Commission (a forerunner of the Red Cross), during the Civil War. I, too, was a dreamer and a wanderer. Olmsted became a hero in my early 20s. FLO had his epiphany in 1850, as a 28-year-old journalist, during a visit to Birkenhead Park in Liverpool. It “broke on him like a revelation,” biographer Laura Wood Roper wrote. My own revelation came in Lisbon’s city park, Jardim de Estrela, in the winter of 1976. I was 24. I dreamed landscape design might be my calling. Like Olmsted, I wanted to engage the grandeur of nature with design in order to improve society. 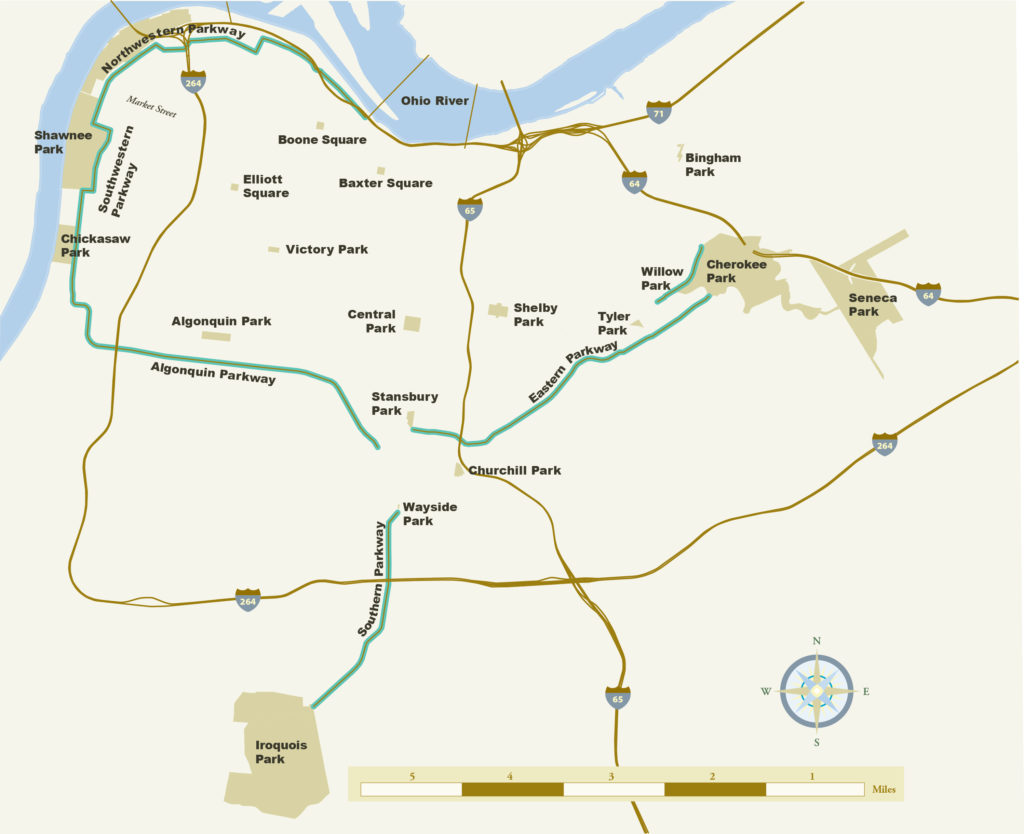 I don’t have a spatial bone in my body. Fortunately, horticulture was a lucky fallback. I endured countless cold, wet, steaming hot and dirty days, but never a boring day. The bonus comes from moments of joy that often sneak up on me in gardens and parks. I am grateful for brilliant designers, gardeners, passionate parks employees, donors and volunteers. Louisville’s Olmsted Parks have survived political winds, the national economic panic in 1893, a historic flood in 1937 that covered Shawnee and Chickasaw Parks, a massive tornado in 1974 that wiped out huge swaths of Cherokee Park, and chronic concerns over insufficient funding for all of Louisville’s 120 parks.

OPC works closely with their longtime, loyal partner, Louisville Parks and Recreation. The Conservancy, founded in 1989, has raised over 50 million dollars for capital, restorative, and enhancement projects. They also advocate strongly to protect Olmsted parks across the city. I am grateful to OPC and confess I am a former board member of the Olmsted Parks Conservancy. 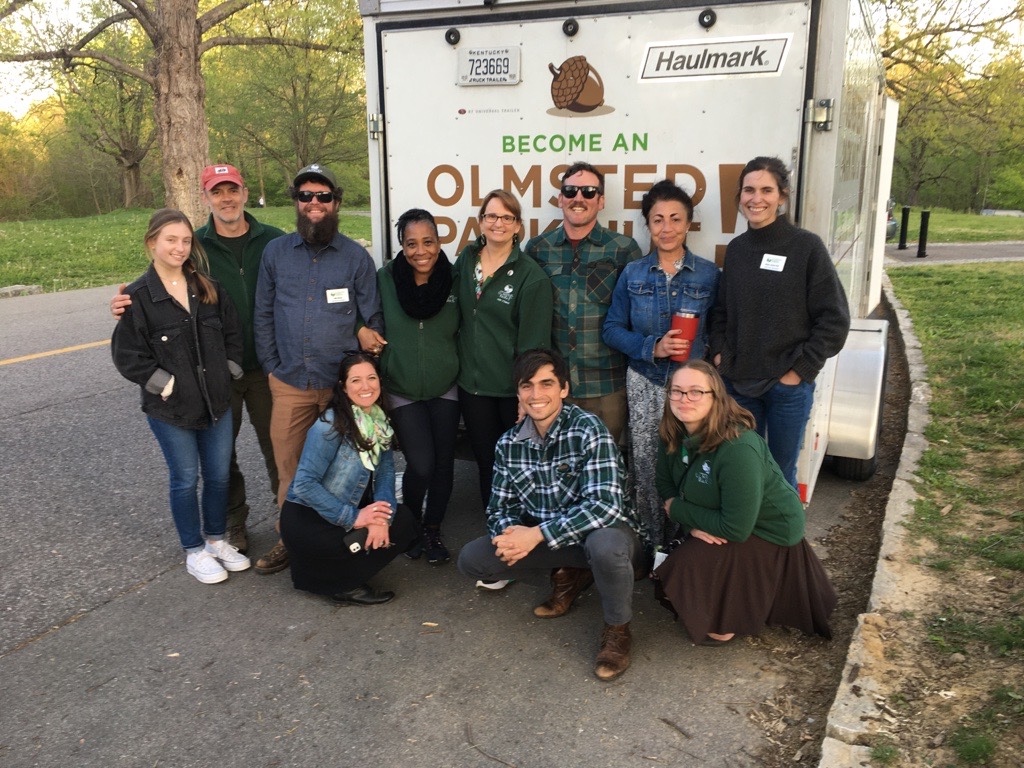 Sarah Wolf, Director for Advocacy and Programming, has worked for the OPC for 17 years and lives near Shelby Park. She works on cultural improvements and spends a lot of time talking to residents who live near Olmsted Parks, listening to desires and concerns. Park users have begun to advocate for their parks, with city leaders, through their neighborhood associations in Shelby, Tyler, Victory, Iroquois, Elliott, and Bingham parks. Capital improvements have been made, in these and other Olmsted Parks with neighborhood input and with matching funding from the city and the OPC. 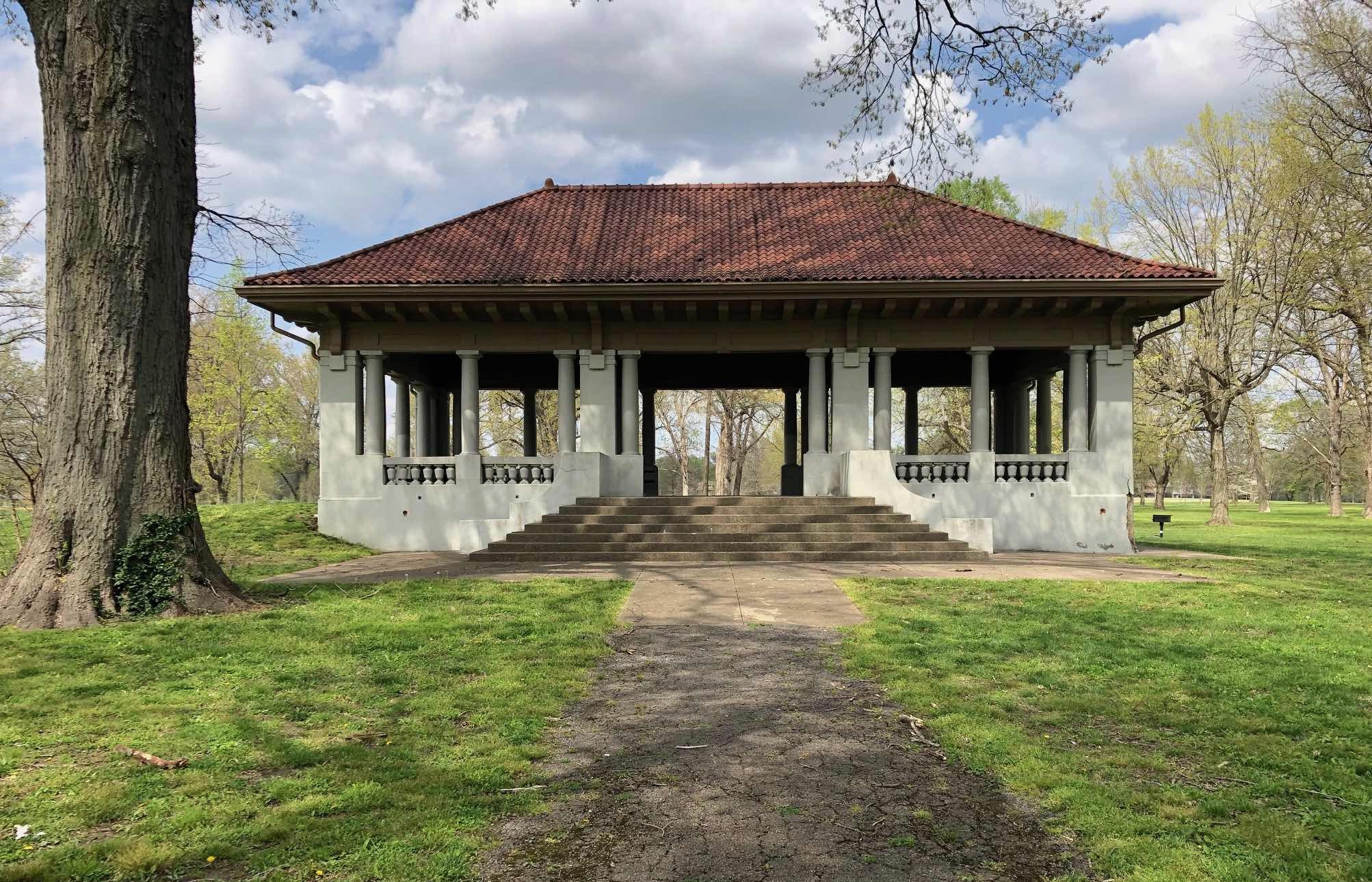 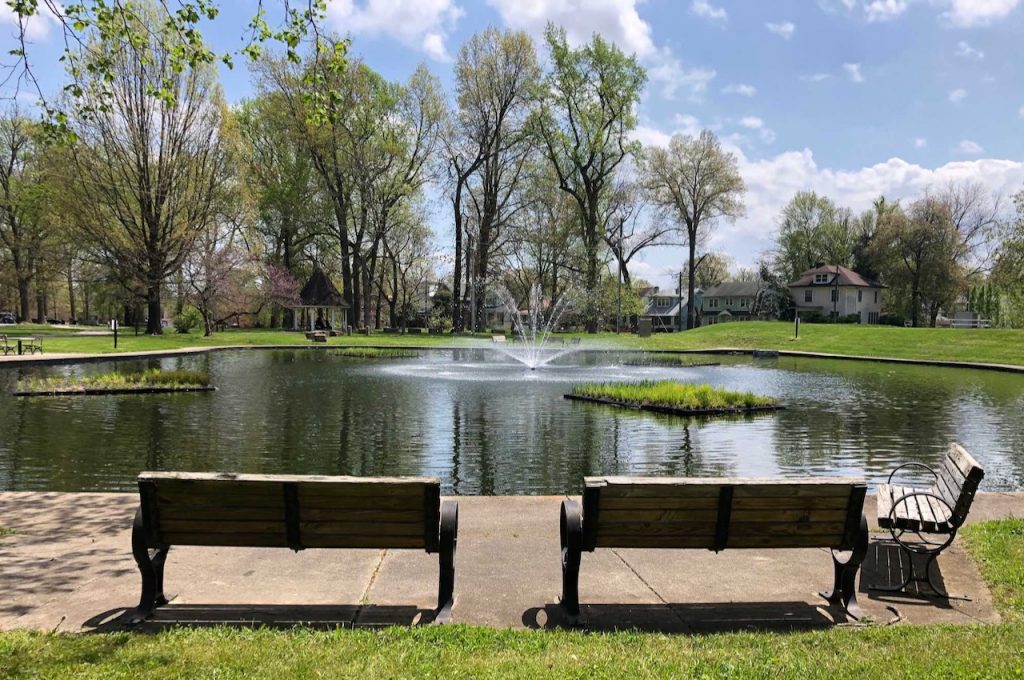 While I lack spatial intelligence, I am a keen observer. I spent a couple of hours with Matt Spalding, the Conservancy’s Director of Stewardship, a few days before Olmsted’s birthday. We started in Shawnee Park and geeked out on cottonwoods, shagbark hickories and a wild rye grass along the banks of the Ohio River. We passed the small “pinetum” that included Bulgarian and Manchurian firs and a golden larch. Farther on, Matt showed me “floating beds” of newly planted sedges, flag iris and a soft rush in the lily pond. We drove a short distance and visited Boone Square, Baxter Square, and Victory Parks, smaller, neighborhood parks. Matt pointed out a large gingko in Boone Square, a magnificent tulip poplar and curvilinear paths in Baxter Square Park, as well as the new community center and designed basins that capture storm water in Victory Park. 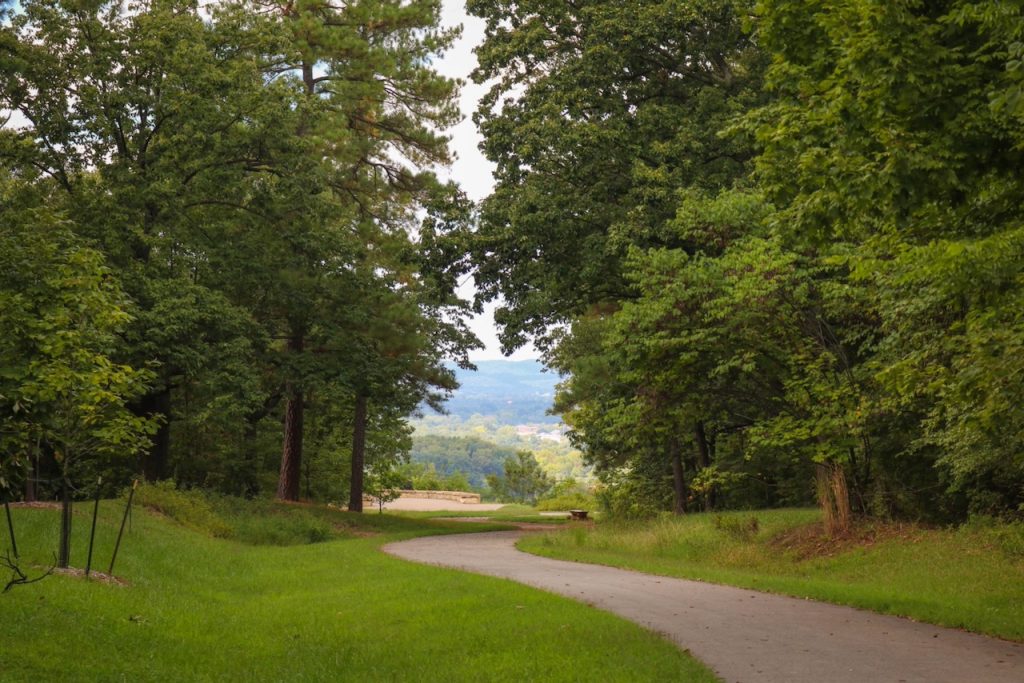 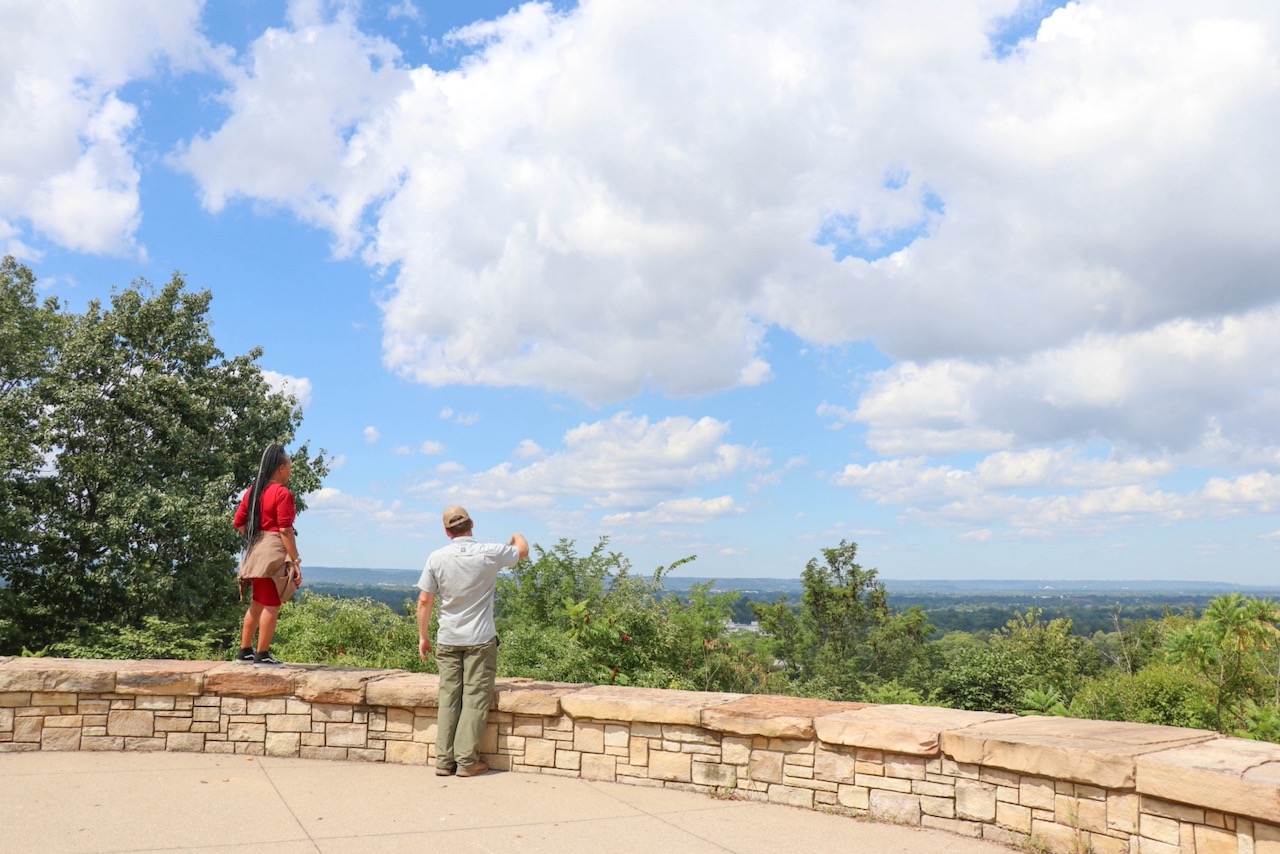 We rushed to Cherokee Park to meet University of Kentucky Landscape Architecture students. Matt stood atop Baringer Hill, waved his hand toward the beautiful vista and told the story of Olmsted’s extraordinary vision and Louisville’s determination. We moved onto Barringer Springs, down the hill, surrounded by Kentucky coffee trees, devil’s walking sticks, wood poppies and coral berries before finishing up at Hogan’s Fountain. I wanted to keep the hayride going. I wanted the students to see the other two, principal Olmsted Parks— Shawnee and Iroquois. And the smaller Victory Park in the California neighborhood.  What would these spatial-minded students see that I couldn’t? 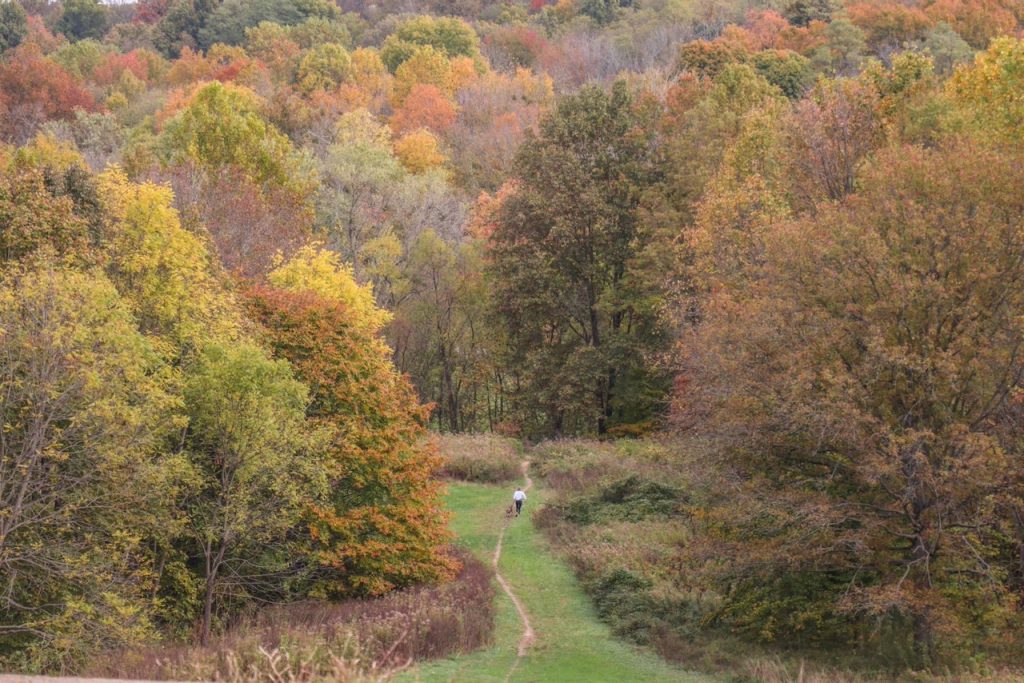 What would Fred think?

Olmsted would have been curious about these young students and their ambitions. He could be harsh. I forgave him for once calling Beatrix Farrand, America’s first female architect, “a dabbler.” My guess is he would have been dismissive of the iconoclastic Tepee in Cherokee Park built in the 60s. That’s OK. He would certainly be grateful his parks are still loved and for how the Olmsted Parks Conservancy remains passionate about and committed to the parks that he and his sons had touched so many years before.

Frederick, Jr., and John Olmsted inherited the family firm upon their father’s death in 1903. They worked on the extensive, Louisville system of parks and parkways for the next 45 years. Louisville has earned the privilege of being included in any serious discussions about the most significant Olmsted projects. 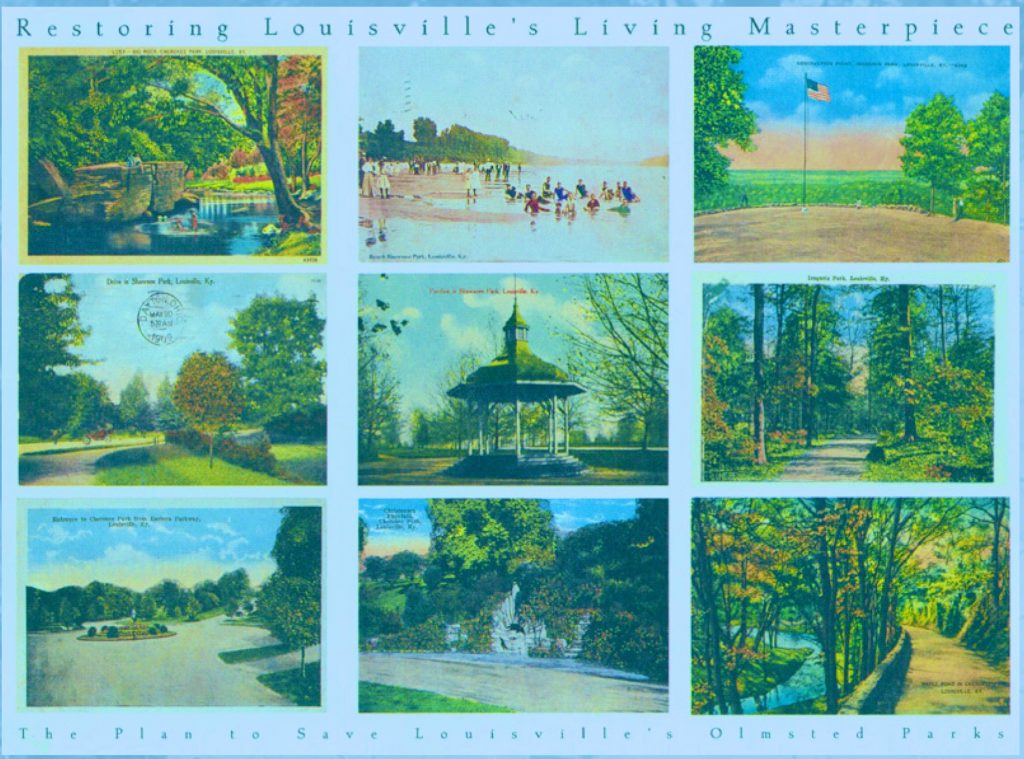 The Olmsted Parks Conservancy is the steward of this historic Louisville path. Their mission is to “…restore, enhance and forever protect Louisville’s Olmsted-designed parks and parkways, connecting nature and neighborhood while strengthening the community’s well-being. Keenly focused on our vision—that all seventeen parks and six parkways are extraordinary, in every way, for everyone.” 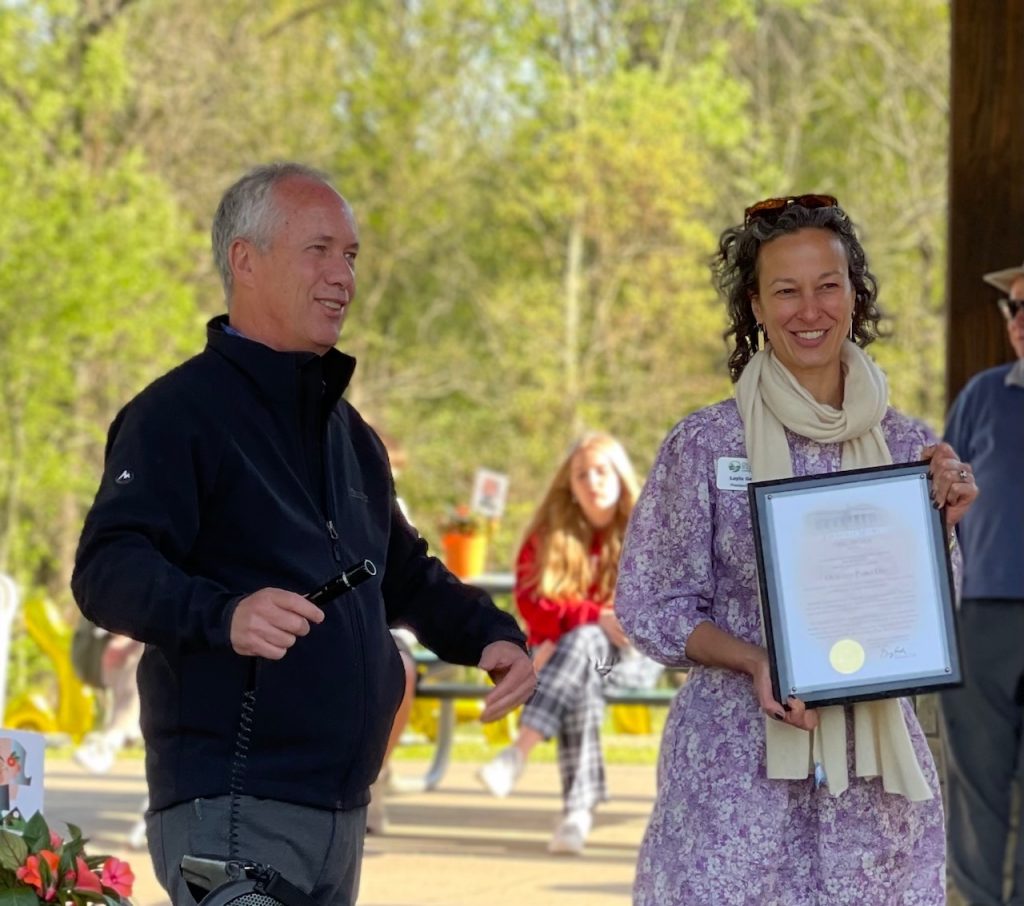 Mayor Greg Fischer came to the birthday party and proclaimed April 26th as Olmsted Parks Day, 133 years after the Louisville Olmsted Parks began. (Kentucky Governor Andy Beshear also acknowledged the special day.) Mayor Fischer complimented FLO as “…super visionary.” On this beautiful April evening, he added, “Our time on earth is to make a better place…The best is yet to come.”