Why did I ever get into this gardening game?

I recently came across this quote. Someone was doing one of those ‘aren’t we all wonderful, us gardeners?’ thing:

“A garden is a grand teacher. It teaches patience and careful watchfulness; it teaches industry and thrift; above all it teaches entire trust.” 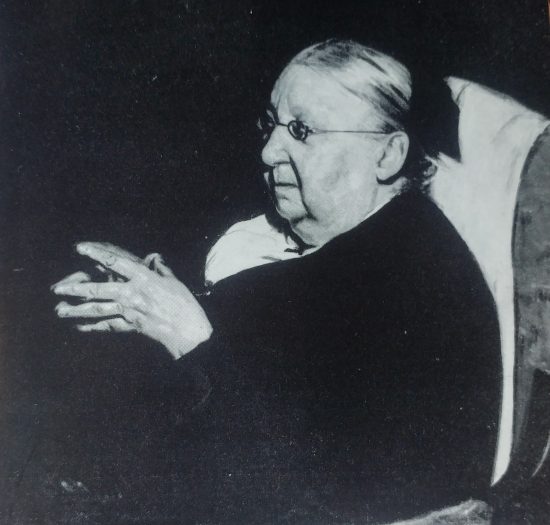 Well, Gertrude had some great things to say, but I’m not convinced by this one. Not as far as I’m concerned, anyway. Not one bit.

Recently a few of us were discussing how to get something to work on my mother in law’s television gizmo. We experimented with her problem, trying to find out why it wouldn’t work. At last we discovered that if the programme she wants doesn’t appear instantly then she hits the button again. And, then, probably, again. And gets no result.

Oh, I know that one. When the web page doesn’t happen. I bash keys – sometimes several times all at once, kind of thinking, yeah, that will punish it into activity. No, I am not patient either.

So when I stick a sapling in the ground which I’m hoping will get a move on and turn into a tree, I am not being patient. I’m being resigned to this rather frustrating world I’ve got myself into. Putting up with is not being patient. 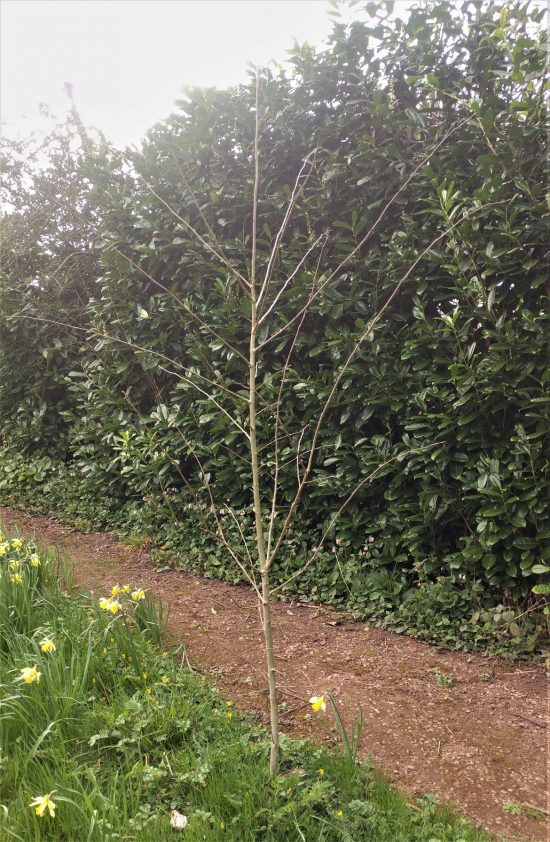 O, not so much. Many years ago I planted a bank with trees and shrubs and then left them to get on with it. At some point I was reading (oh, yes, I do do a lot of that) about one of those shrubs and found myself wondering what had happened to the one I had shoved in some years ago.

I went off to have a look – at a full sized tree. It had snuck up on me. It was next to the drive, where I can’t go to take the bins out or drive off to the garden centre without, you might have thought, noticing the growth going on. Well, not. 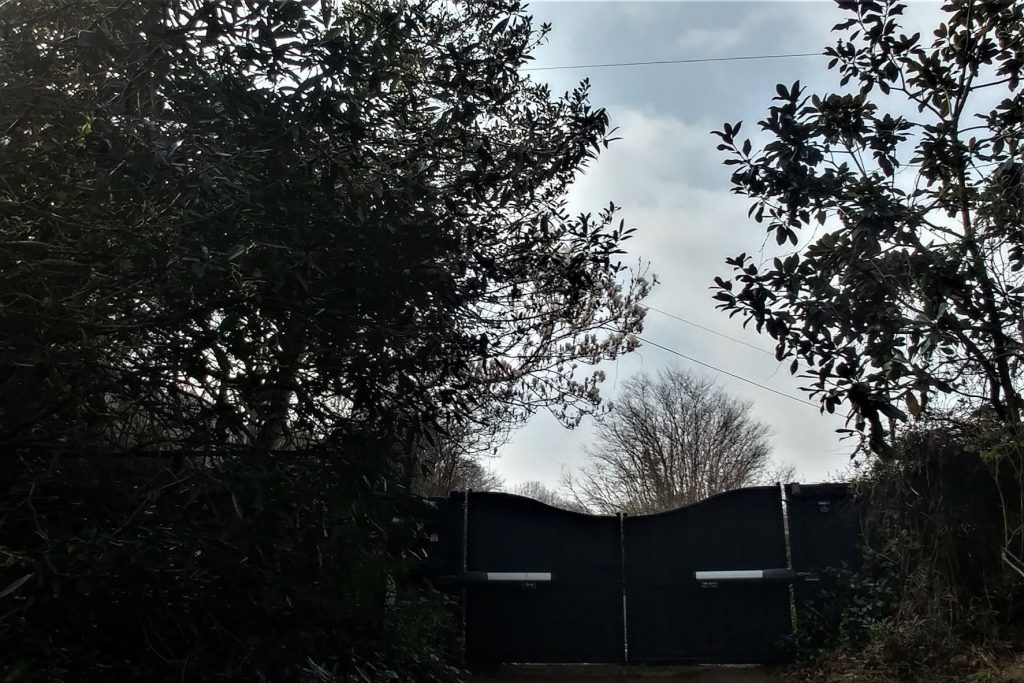 They got quite big… (though this is even more years later)

‘Industry’ – oh ha. The only reason we have the garden we do was desperation on my part in the first instance. I needed a garden, it was my raison d’être. I had two acres of field and a spade.  The only way to get anywhere was endless short cuts, tricks and evasions – which eventually led to my writing about how to garden without much effort. I am naturally lazy. Born that way. I would have called that book ‘How to be a Lazy Gardener’ but the publishers considered that potential purchasers would be insulted to be identified that way. So – just me, then.

And it subsequently helped that I managed to galvanise Charles, who is not lazy, into gardening activity, followed by employing some help…. 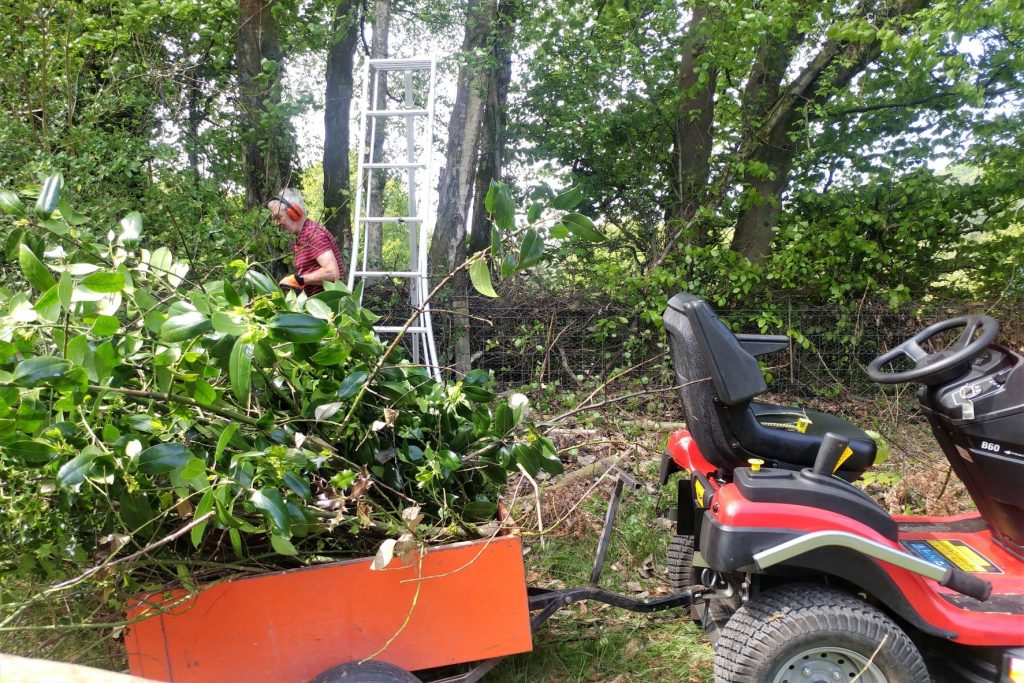 Falls about laughing…You should see how much we I spend on the garden. Gardens have famously ruined people before now and I’d possibly be heading that way if garden spending wasn’t usually necessarily destined to be followed by activity: plants demanding planting. Sometimes I imagine the effort involve and turn…lazy.

In what?? Heavens – trust what out there?? The utter malice of nature?? We have box blight, holly blight, fireblight, honey fungus, deer, rabbits, red spider mite, clematis wilt, vine weevils …..and moles. 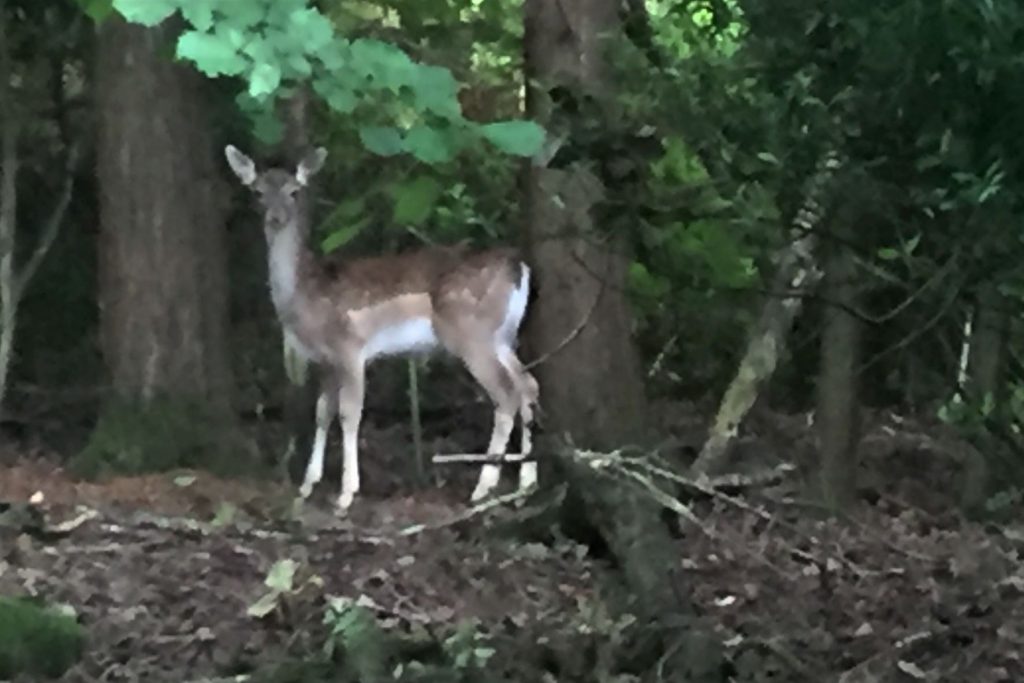 Chomper. We are no longer allowed to describe anything as a ‘pest’ now.

There are quite a number of other things which make me a totally unsuitable gardener.

Why won’t it stop?

I’d really like to make something that just stayed still for a bit. So that you could do something useful and then sit back and enjoy a little well earned satisfaction. (writing actually does this better than gardening) Gardens change daily and what looks Instagrammable one day will rot the next. 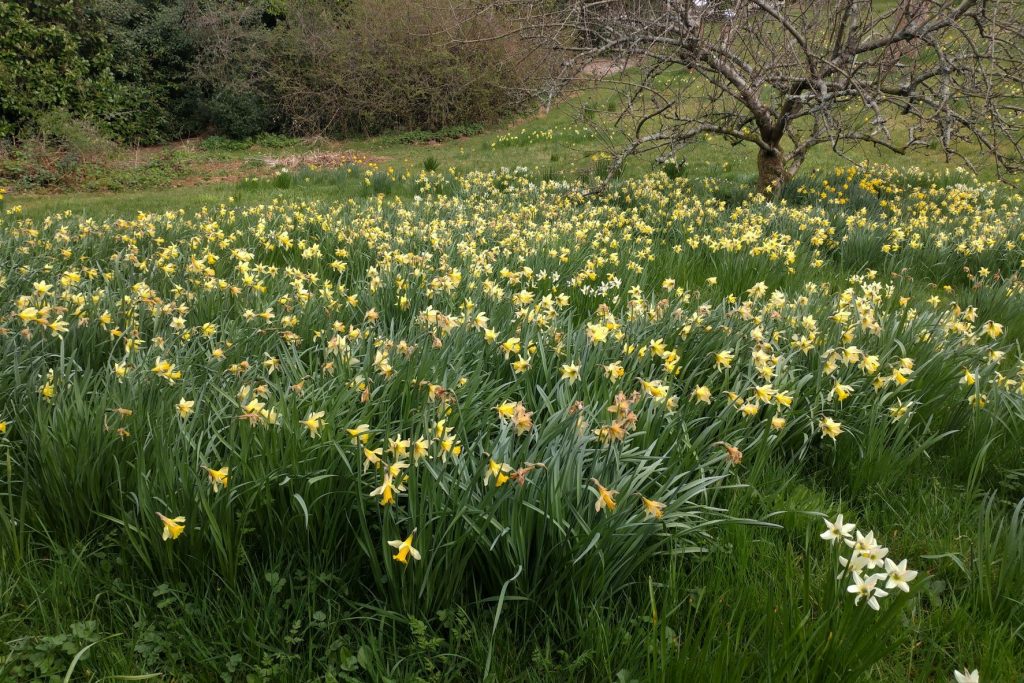 Look at them – going over already.

We’re supposed to do talks, go to Chelsea Flower Show and any other gardener get together, meet and greet visitors to our gardens, generally be friendly and chatty. Me? I’d rather stay in bed… 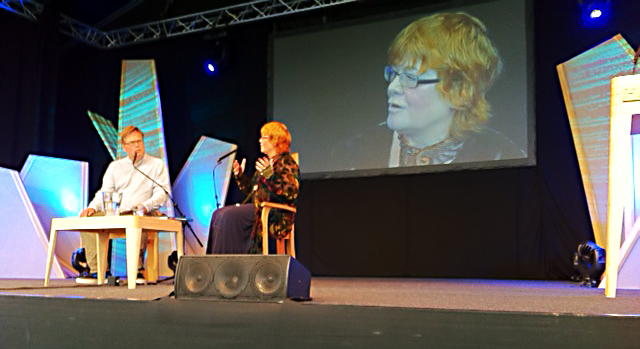 I have done most of these things and learned to – stay in bed. Here’s me at Hay Festival with Tim Richardson. Copyright Charles Hawes.

Bending down is bad enough but kneeling is worse. The struggle to get back up is undignified and –

Which is why you won’t find me out weeding when people come. See bending down…

I’m not into detail

So you won’t find me seeing a world in a grain of sand and a heaven in a wild flower. 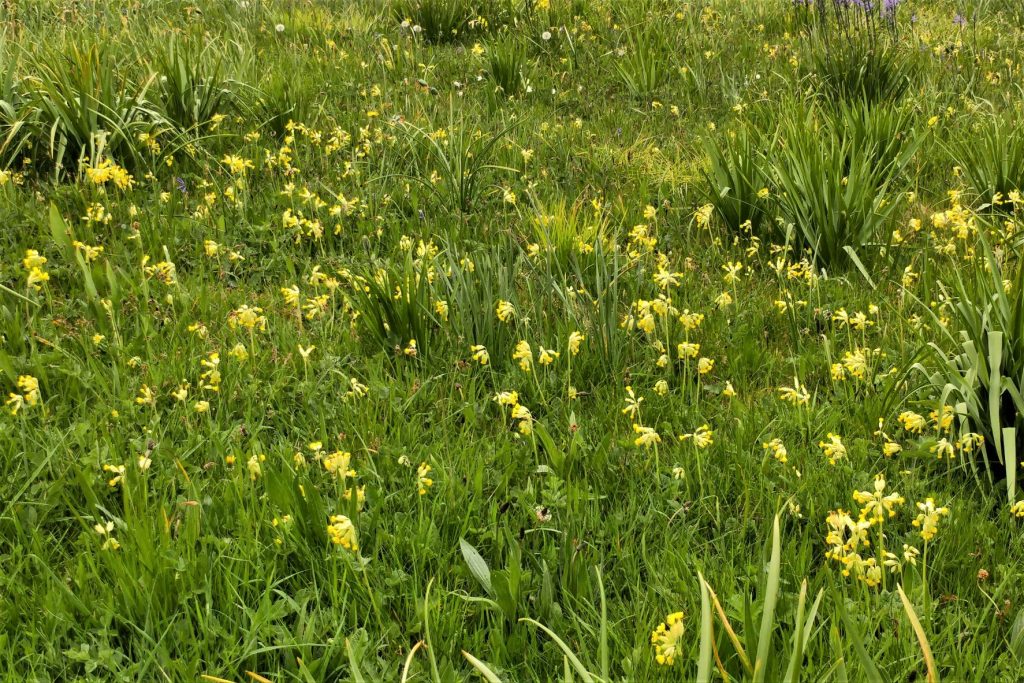 Heaven is thousands of wildflowers! (cowslips in this case) 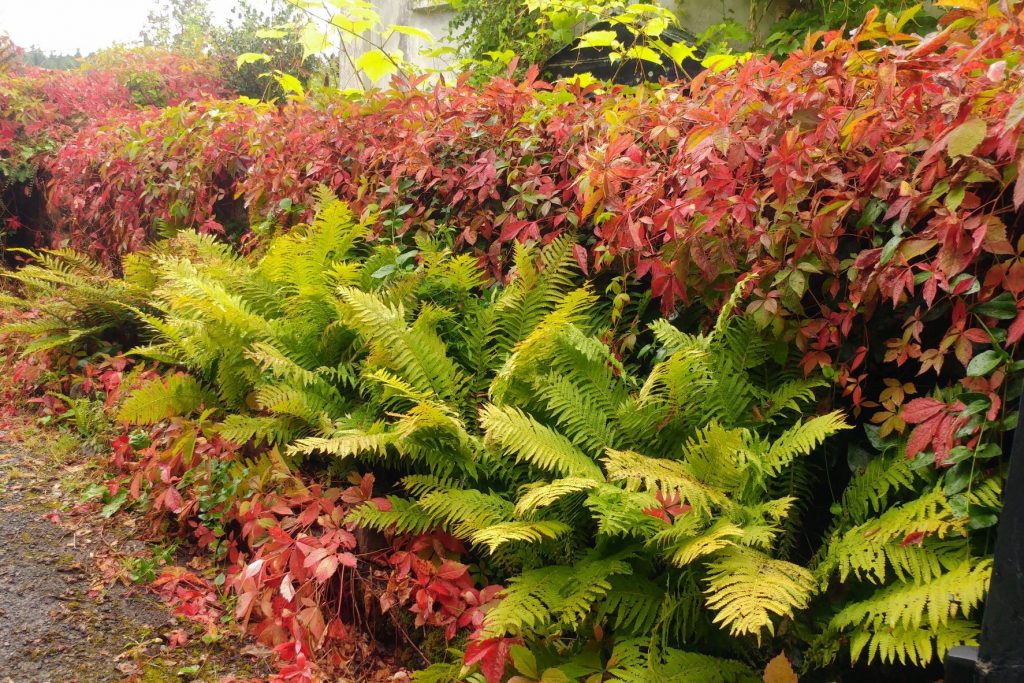 That (above) rather than this: 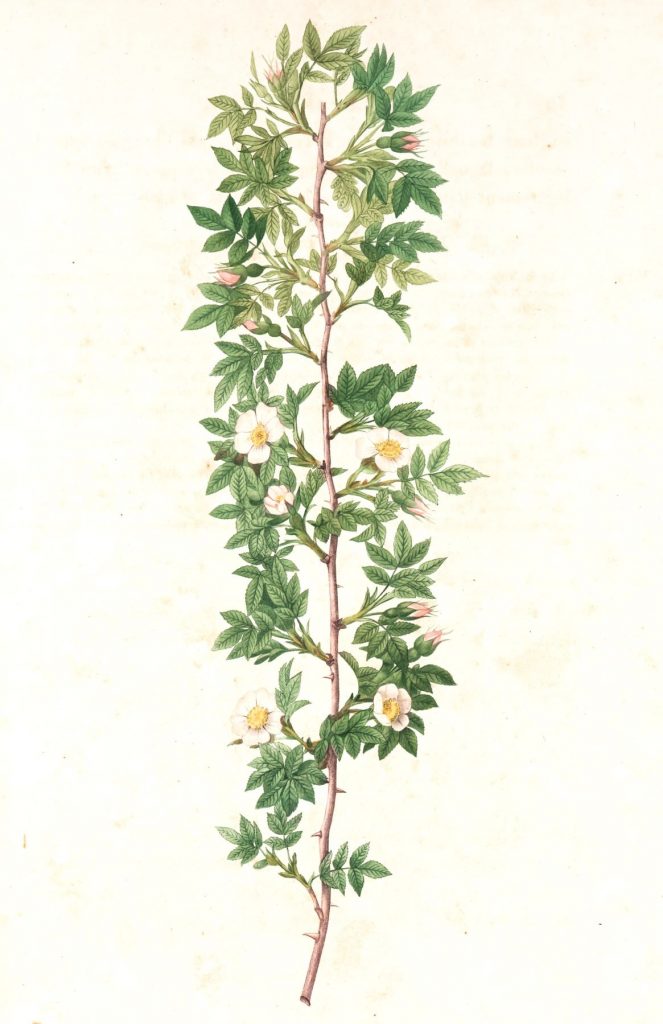 And, come to that, I have a sort of inner aversion to enthusiasm. So while hundreds of keen (sigh) gardeners are merrily adding ‘lovely!’ and ‘beautiful’, ‘fabulous!’ ‘gorgeous!’ ‘absolutely magical’ to anything and everything gardeny, I get ambushed by my inner Eeyore and think ‘why ever did you do that?? 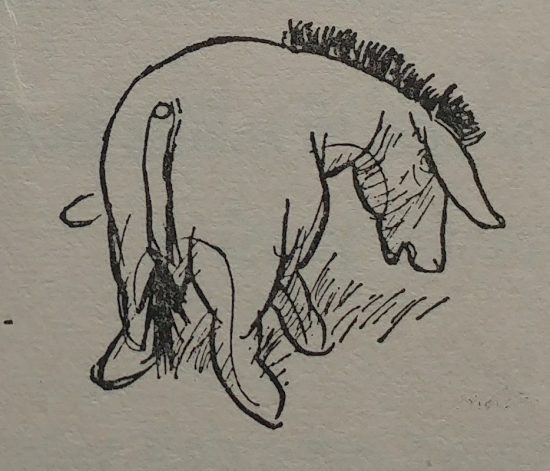 I could go on, but what more could you bear to know?