I’m painting my fence black and I love it.

I could begin and end this post with its self-evident title, but there’s a little backstory for those who want something more than a declarative sentence.

I’ll try and keep it shortish (this is where Elizabeth Licata laughs ruefully and rightfully), but it’s a backstory that other pre-black fence people like me might need to push them into becoming post-black fence. Or indeed into taking one of any number of design risks in the garden (and life?) and coming out on the other side with a massive smile across otherwise adequately-satisfied faces. 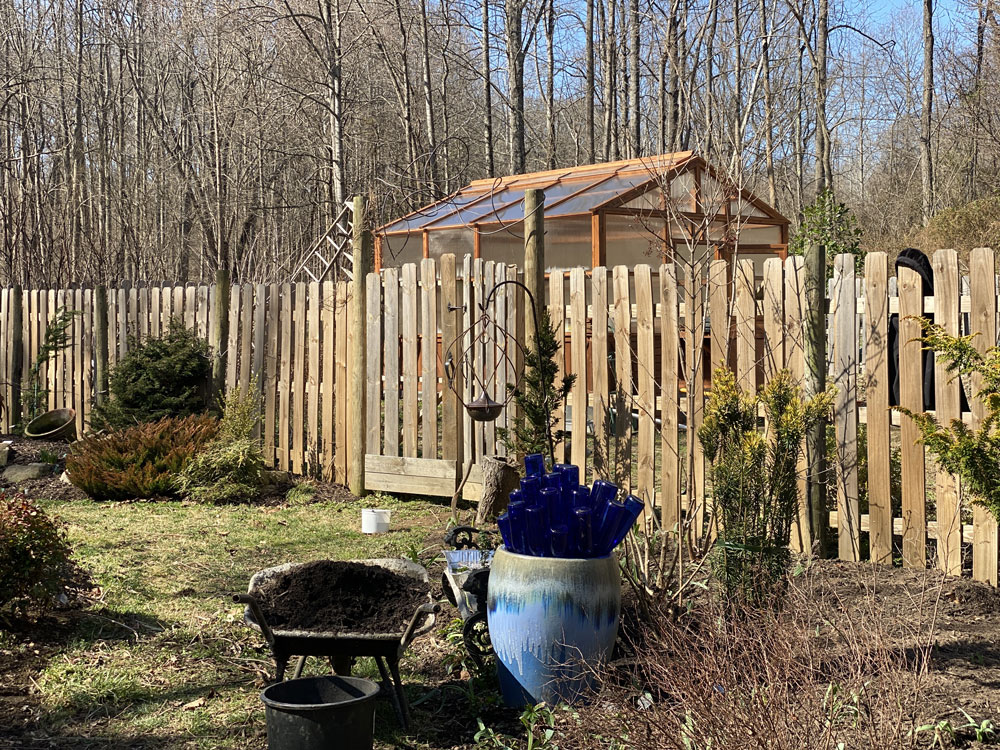 What to do…what to do?

I may be the world’s greatest FOMO extrovert at a party, and opinionated as hell over the dinner table or behind a 17-inch HP Pavilion, but when it comes to design, I’m not a risk taker. I have to be pushed, cajoled and sometimes bullied into the decisions that will eventually tickle me.

And I’m the chief bully.

I spend a good deal of my life in this combative headspace because the good Lord thought it wise to pair my practical brain with an adventurous and ambitious spirit.  It is a terrible thing to make a decision knowing dreadfully that it is the Safe and Reasonable™ choice, and will result in a Safe and Reasonable™ garden, home, or life. How much happier are those who cheerfully plant the foundation shrubs and get on with the business of being bored by them?

My newest struggle began with a heretical idea: slapping two coats of black paint on a wooden slat fence in a rural setting where a coat of Natural 00 would tick a much safer box. 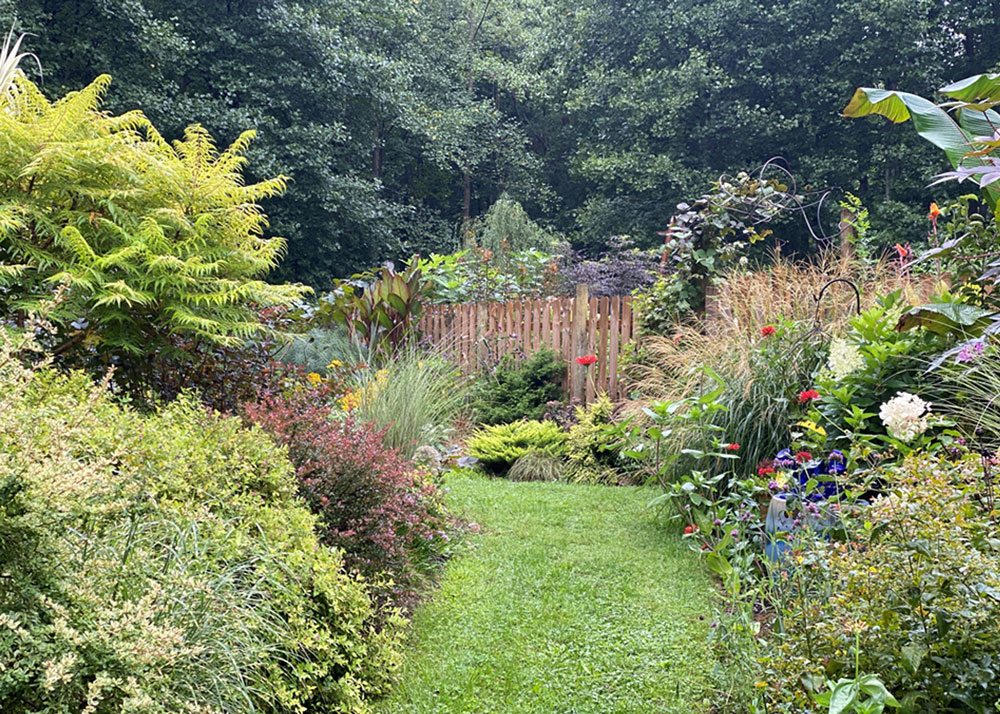 Looks fine here, right? But is ‘fine’ what I wanted?

In doing so, I’d dynamically claim a small area of my wildish, otherwise informally designed garden for kitchen garden formality and deer-free flora.  I’d showcase various perennials, shrubs and small trees against a strong background, and I’d make a statement about the garden I was creating.

In that, yes, I was creating a garden, not just throwing a random assortment of plants in the ground as the mood and clearance rack struck.

But I’d also invite the criticism of friends and neighbors, one of which long ago advised me against strong design statements such as…(wait for it)…..coniferous trees – lest they spoil the genus loci of this lovely valley and its deciduous woodland.  A black fence would put the Loki in loci, and might be the costliest (and most obvious) mistake I ever made.  Neighbors might paint their horse fences black for practicality, but there isn’t anything practical about painting a highly visible seven-foot-tall fence black where birds perch, soil splatters, and the sun works its UV magic.

It took this sensible brain an embarrassingly long time to be brave and choose to go bold. And once the choice was made, there was still an 11th hour ecstasy of fumbling where I found myself in the back of a long line at the paint counter only to decide that the length of it was a sign that I shouldn’t do something so rash. I left the store and stared at my steering wheel for ten minutes, keys in the ignition.

If you’re disgusted with my total lack of backbone, we’ve got something besides gardening in common.

In my defense, fences are expensive. Stain is expensive. Stain a fence black and you are thoroughly committed. If you hate it… if indeed everyone comes together in a general consensus of hating it… all  that will be left to you is a covering-coat of Mud Brown – a hue designed to punish the uppity gardener for her uppity choices in perpetuity.

Safe and Reasonable™ choices don’t require that kind of extrapolative thought process. They neither give offence nor inspire interest, thus saving the cautious gardener from both uncomfortable conversations and enthusiastic accolades.

After ten minutes of contemplating this grim-as-hell scenario, I was back in line and eventually hauling a large bucket of liquid fear back home. 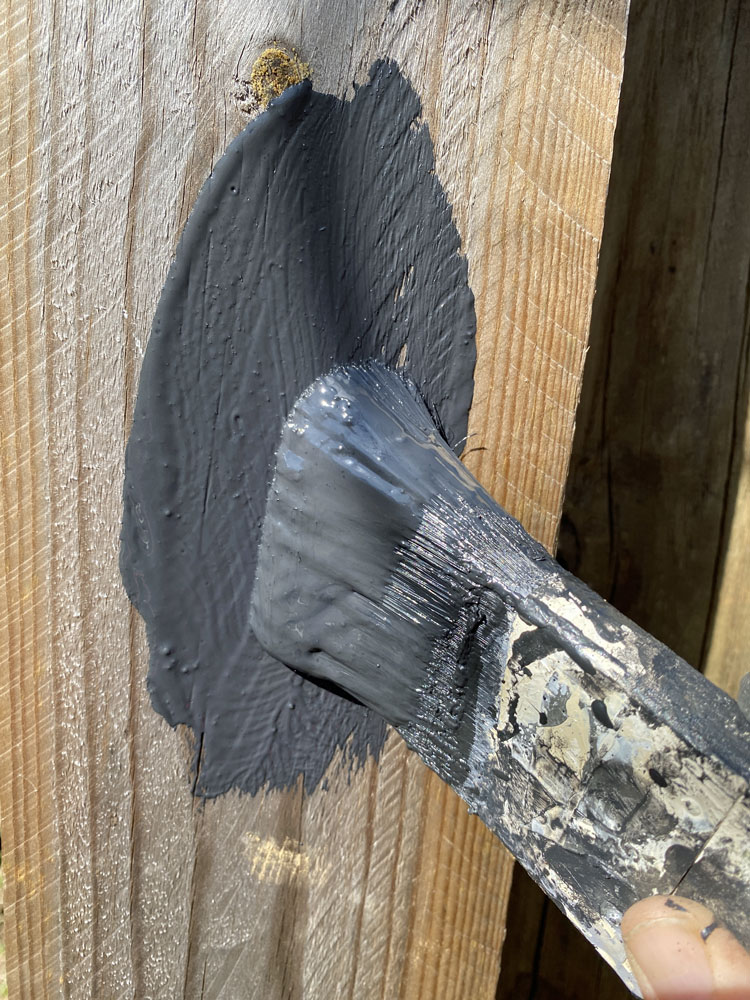 And four slats in with a shaking brush, I was sold. I was also deeply thankful to whatever tiny part of me rose up and throttled the much larger part of me that prefers to play it safe.  I’ll be painting those slats for the rest of the summer. Slowly but joyfully. 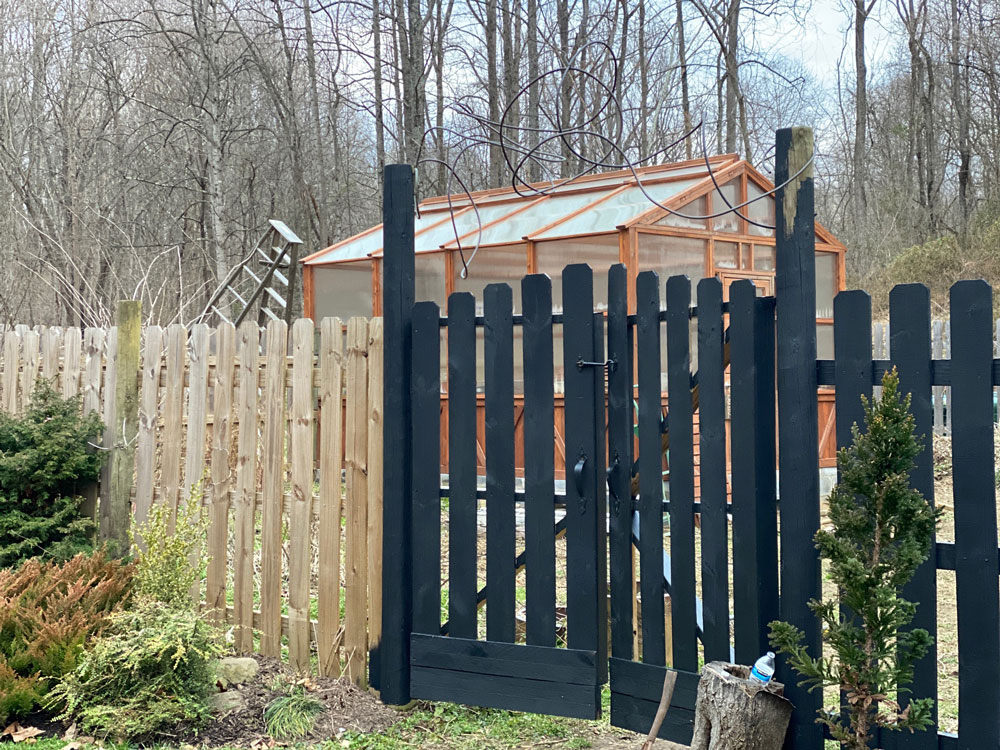 A bold choice makes you sweat a little

Painting a fence black is hardly a novel and courageous design choice. In fact, I can almost hear Scott Beuerlein calling it “the hackneyed choice of those who would never dream of doing anything hackneyed.” Moreover, I can think of several exquisitely tasteful examples that perfectly illustrate his wiseassery. But it’s a novel and courageous choice for me, and this little success tickles the part of me that wonders what is yet to be chosen.

Suddenly, the cedar greenhouse stands out.  The (against advice) conifers stand out. The crazy I’ve-got-some-flexible-copper-pipe-in-the-barn-so-I’ll-make-a-gate-arbor-thingie stands out. The gardener in her own garden stands out. To herself at least.

But the unknown makes you sweat a lot

Moving forward, I want to make more decisions that make me nervous.  I’d like to aim for five minutes in front of my steering wheel instead of ten, and less hand shaking during the creative process. In the case of my black fence, the way was successfully charted by others, I only chose to navigate it.  But my greatest heroes, both of plot and of page, share the following in common: they forge their own way.

These people might be, by nature, anti-establishment. But it’s not as easy as that. Their anti-establishmentarianism doesn’t fall into safe and specific rebellion parameters – the ones within which the rest of the believers are militantly dancing as they spiral into establishment thinking before you can say New Perennial. The impetus for such a life is not the desire to be different – which we all, inconveniently, share – but curiosity, and the will to indulge it.

So, Gregg Tepper is my hero for creating art within ecology by building a network of habitat nests all over the woods of the Delaware Botanic Gardens while Piet Oudolf was designing a different work of art on the other side of the panicum. The late Christopher Lloyd is my hero for pulling out his mother’s Lutyen’s-designed formal rose garden and planting an exotic garden because he wanted to dabble with some seriously exciting plants; and Anne Wareham is my hero because she champions the experience of a garden above the pedigree, popularity, and passport of the plants and/or designer that inhabit it.

Does originality of thought guarantee fame, fortune and the instant respect of one’s peers? In answer I’d direct you to the Delaware Botanic Gardens website where there is no mention of those fascinating, eco-smart nests, nor surprisingly of Gregg Tepper himself, who was the Gardens’ original Director of Horticulture during its first years, and during the Oudolf installation. (My observation not his.)  And Anne has made it clear in previous posts that while people are willing to accept a bit of trending bravery, unpopular truth-telling only gets you told off (I can relate, Anne).

Christopher Lloyd had a great deal of success with his heretical choice, but had he listened to the critics in the early days of his decision, he’d have been tending a Safe and Reasonable™ enclosure of hybrid teas for the last decade of his life. 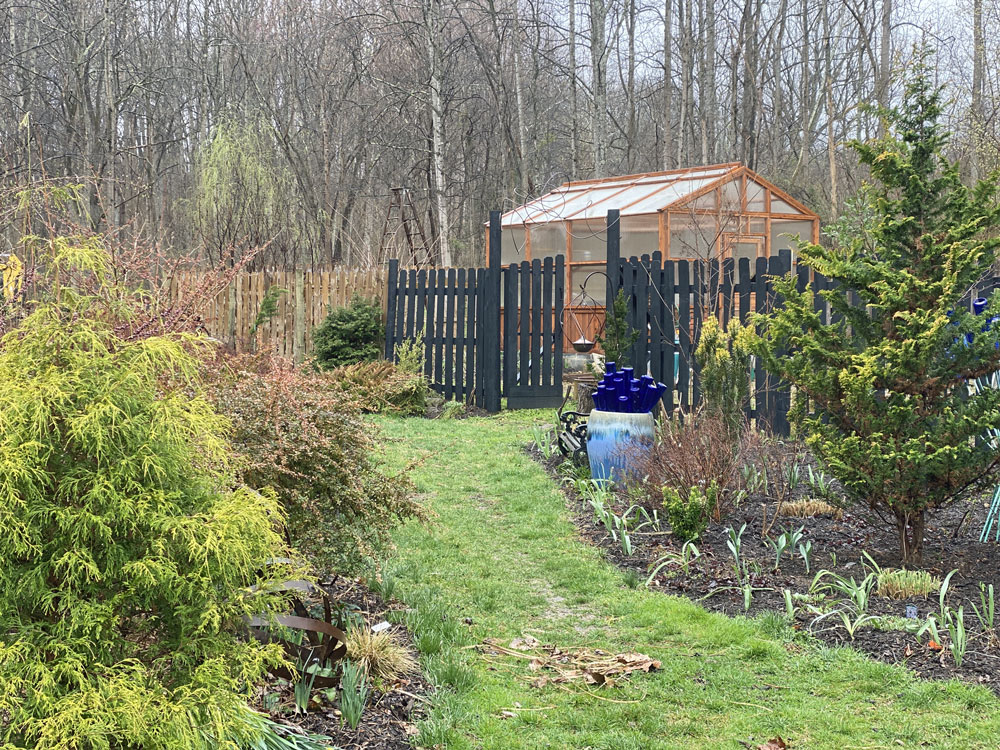 By this fall, hopefully the fence will be finished and the paths, graveled. But we’ll see.

This spring I am my hero for painting a fence black when by rights, it should be a Safe and Reasonable™ shade of natural. No doubt it will charm some and horrify others.  But it will work – and work well – for me, and for the garden I’m creating.  And perhaps, just perhaps, it will lead to better and far more original ideas that make me nervous as hell. 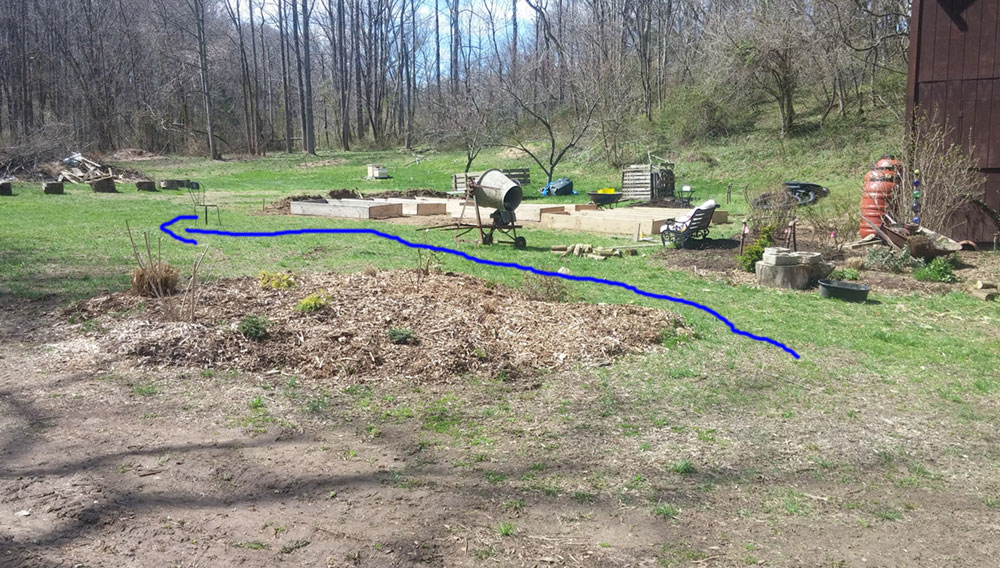 We’ve come a long way from an empty field. And there’s still a lot of ‘nervous as hell’ to go.

This time, brave is within danceable, comfortable parameters.  Next time, well, who knows. – MW