Is it Possible to to Take an Interesting Photo of Peak Cherry Blossoms? 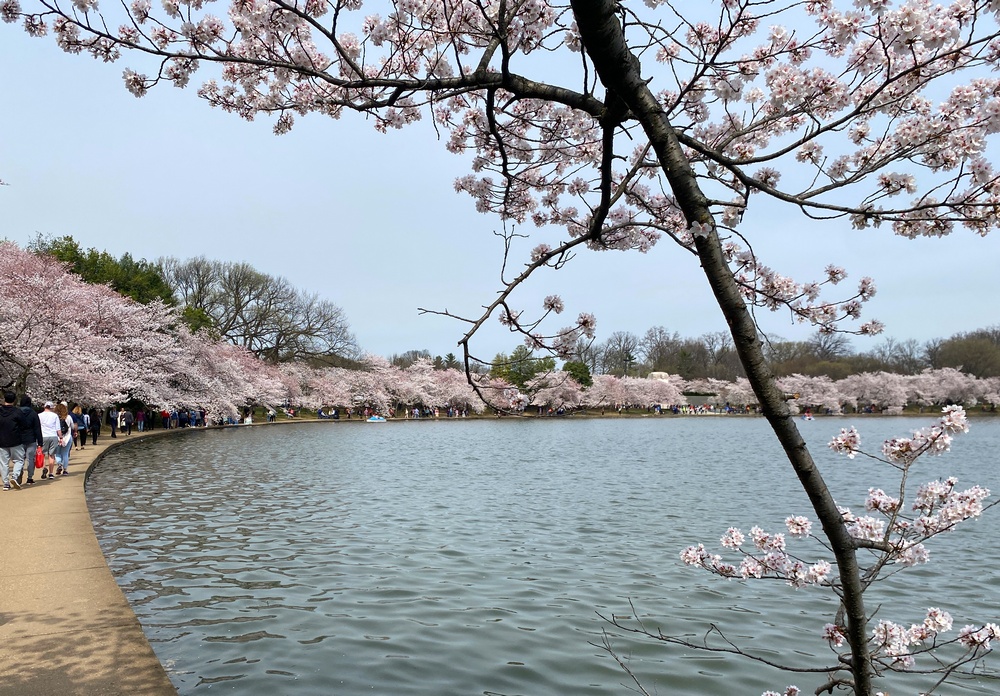 I visited DC’s Tidal Basin on a glorious Tuesday this week, prompted by the forecast and the news that the blossoms had begun their peak period. The Cherry Blossom Festival is also going on.

In my 51 years living in the DC area I’ve probably seen the festival and peak Tidal Basin blossoms – DC’s most iconic images – five times.  So this year was a treat, full of happy humans without the crowd being overwhelming. I parked my bike and explored on foot.

Above, one of the views you see everywhere. I’m sure I’ve seen hundreds of them. 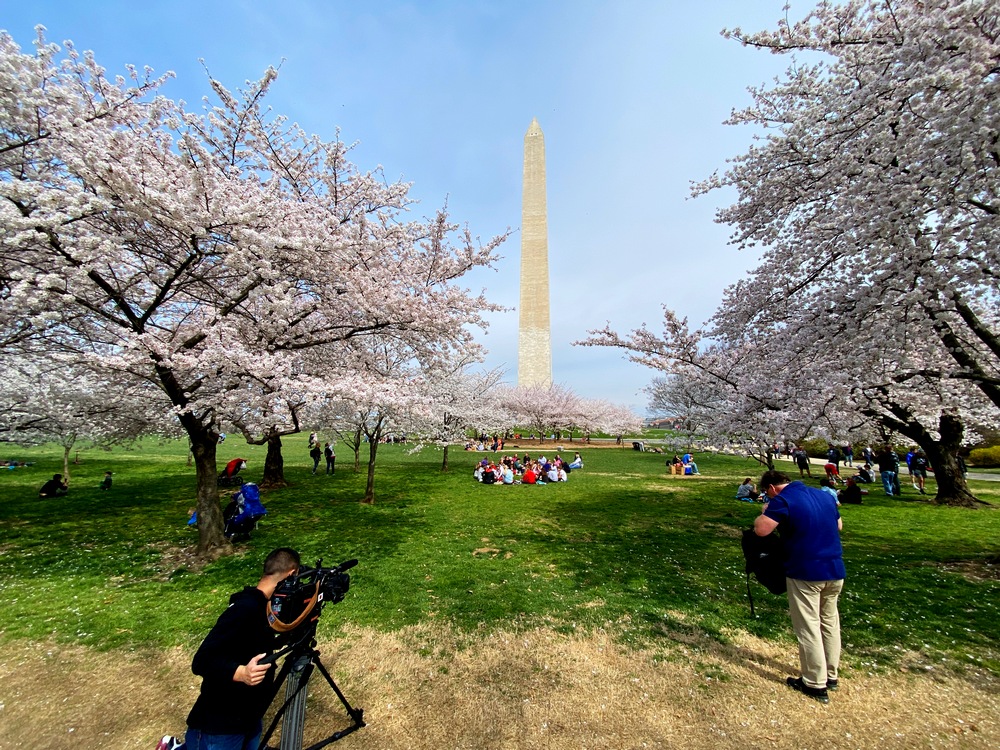 I like shots of humans interacting with the city’s icons, which gives them some action. 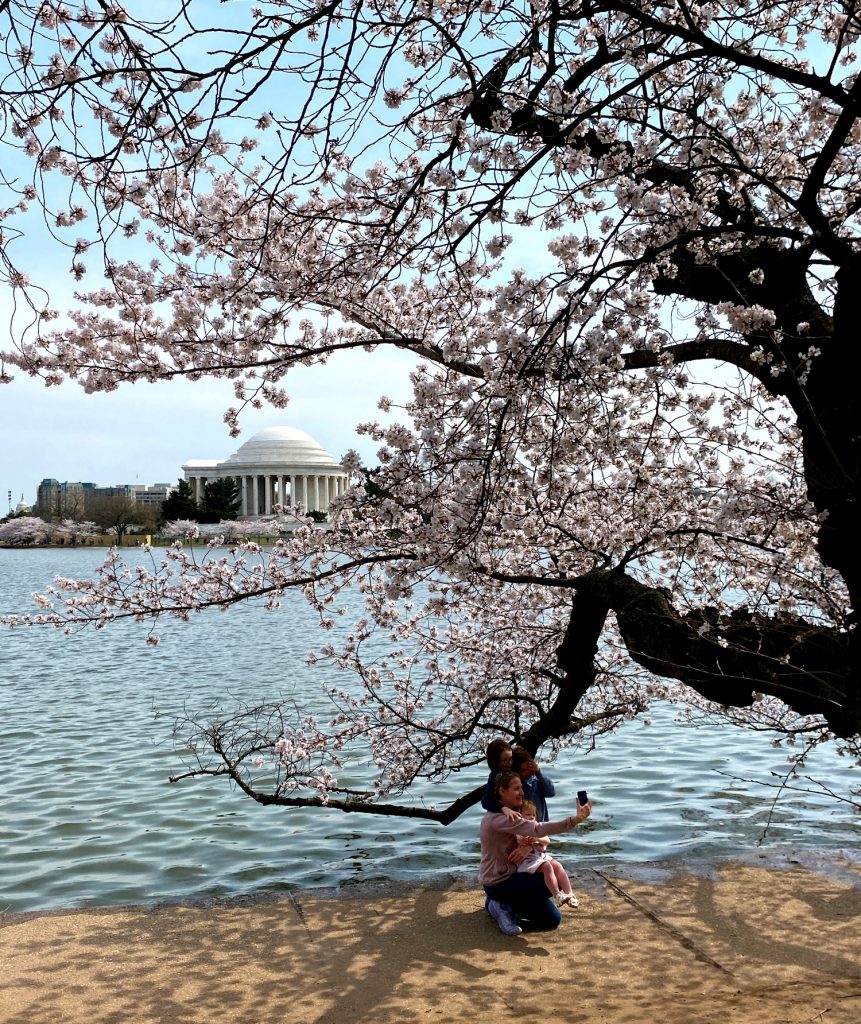 Shots of people posing with cherry blossoms and the Jefferson Memorial are super-common, but at least the people are always different, and interesting in themselves. 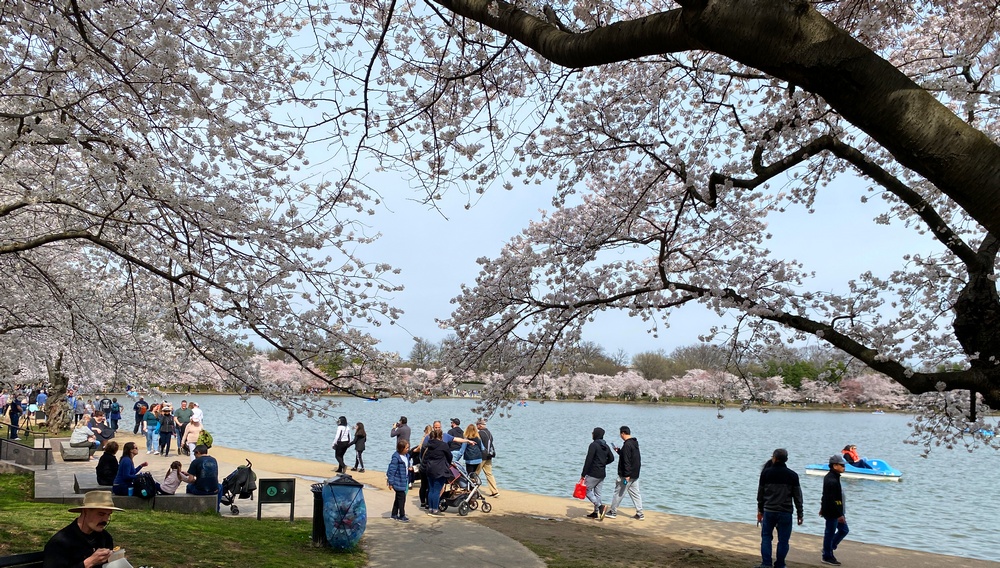 I get a “Sunday in the Park with George” vibe from this gorgeous scene strewn with people walking, sitting, and boating.

Who wouldn’t like paddling on such a stunning day? That’s the statue of Martin Luther King in the background. 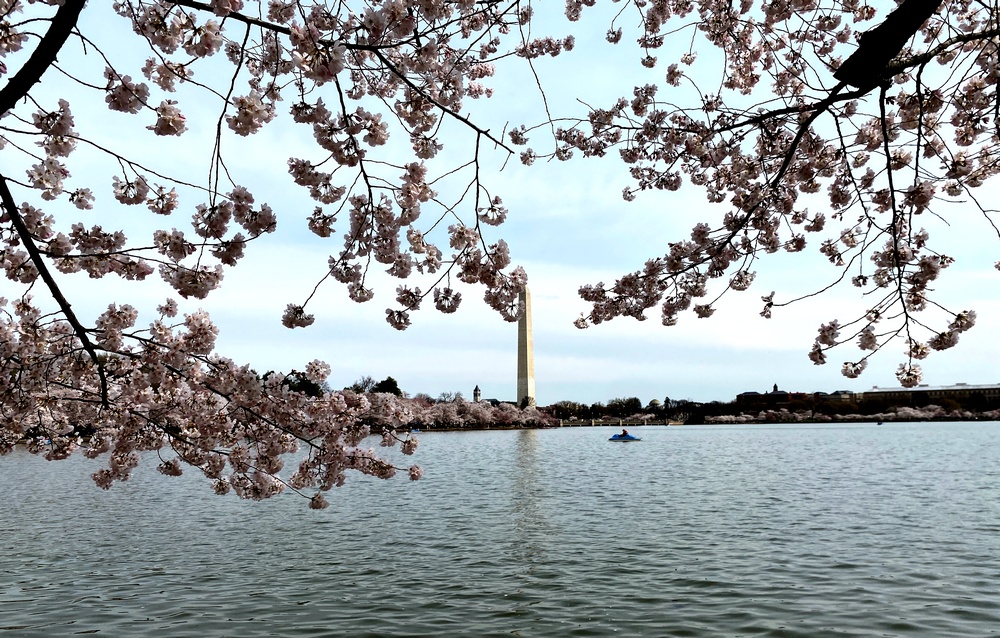 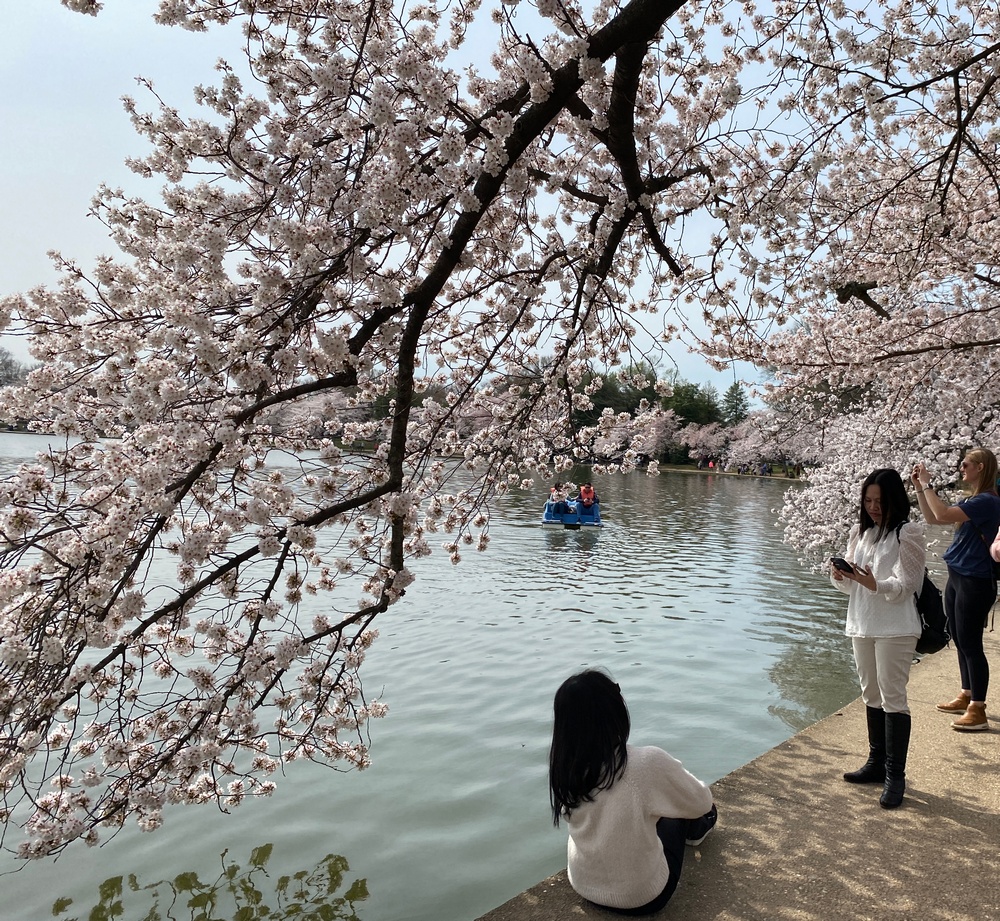 You could take photos of people being photographed all day here and compile it as a human interest study, right? 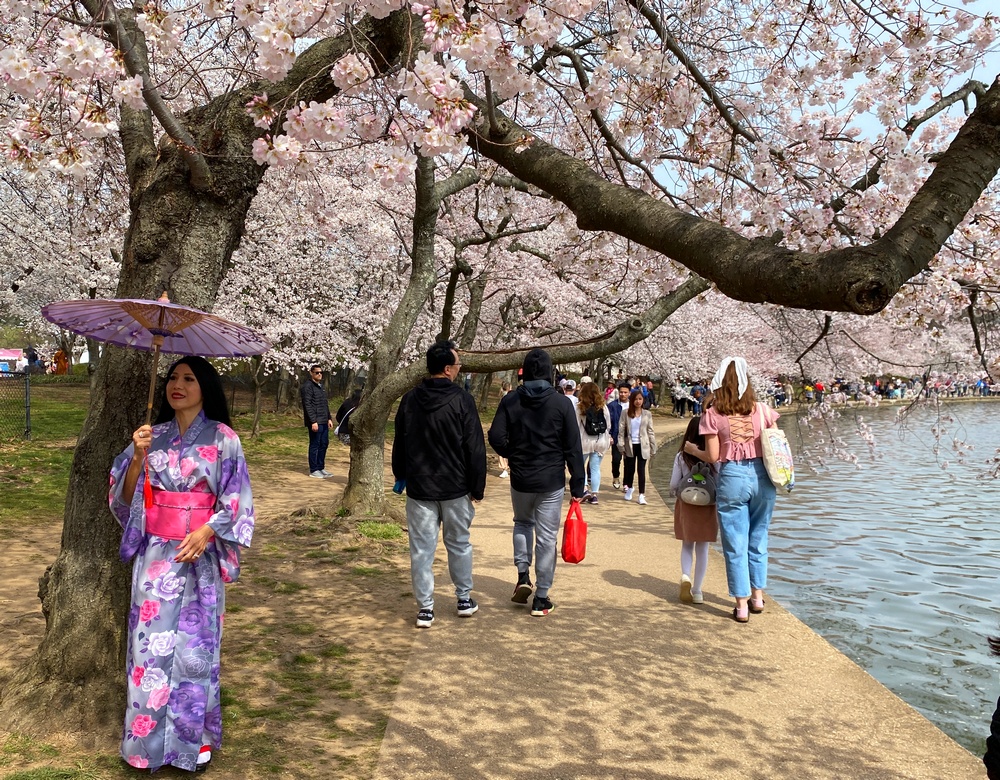 And it’s a lucky photographer who catches someone in a kimono! 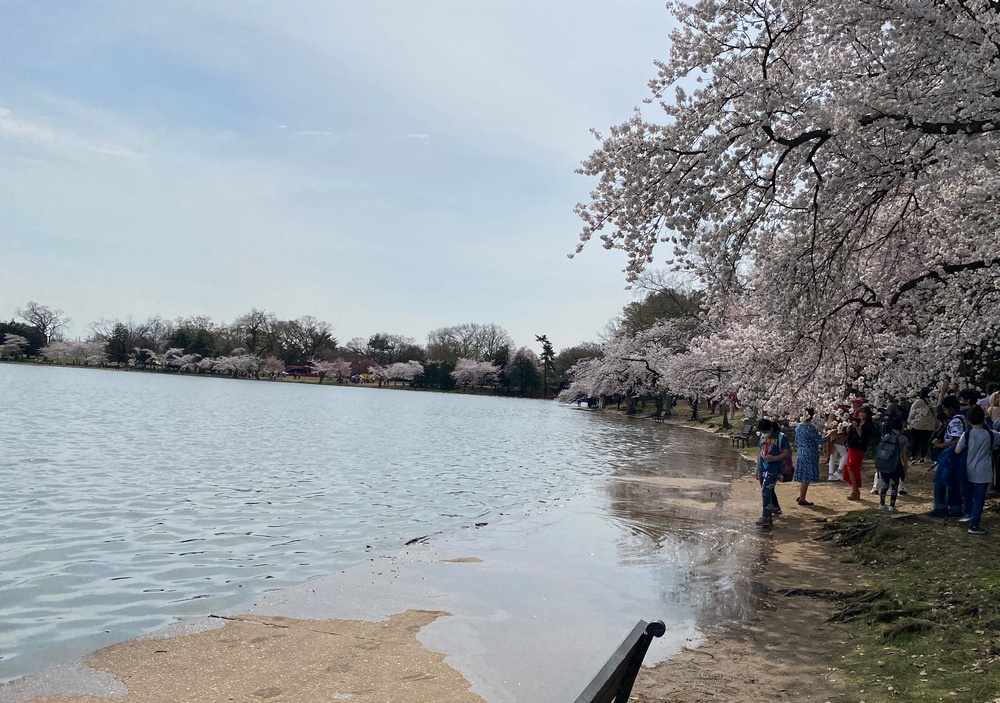 I was surprised to find flooding over part of the Basin’s sidewalk, since we haven’t had an unusual amount of rain recently.  Sign of climate change? 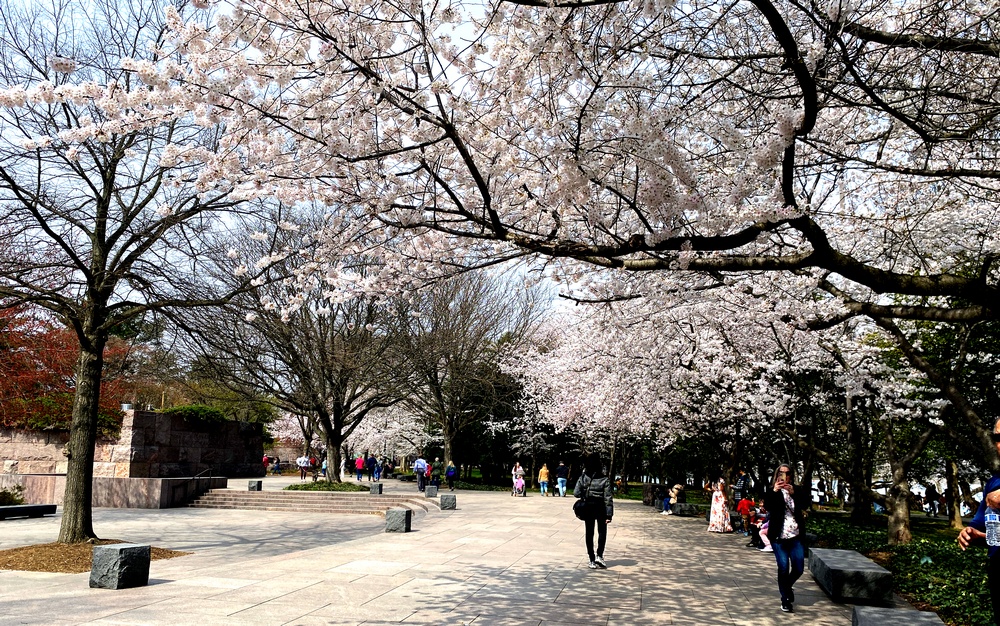 My Tidal Basin walk included a stop at the FDR Memorial, my absolute favorite. 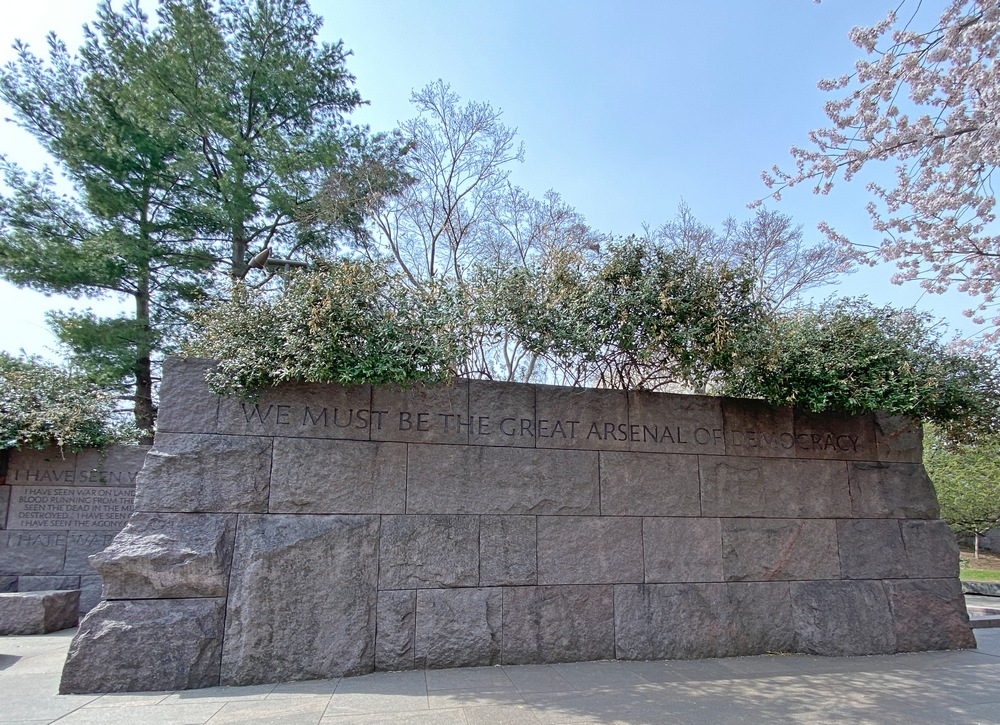 Anti-war quotes by FDR are chiseled into stone here, as well as another timely one: “We must be the great arsenal of democracy.” 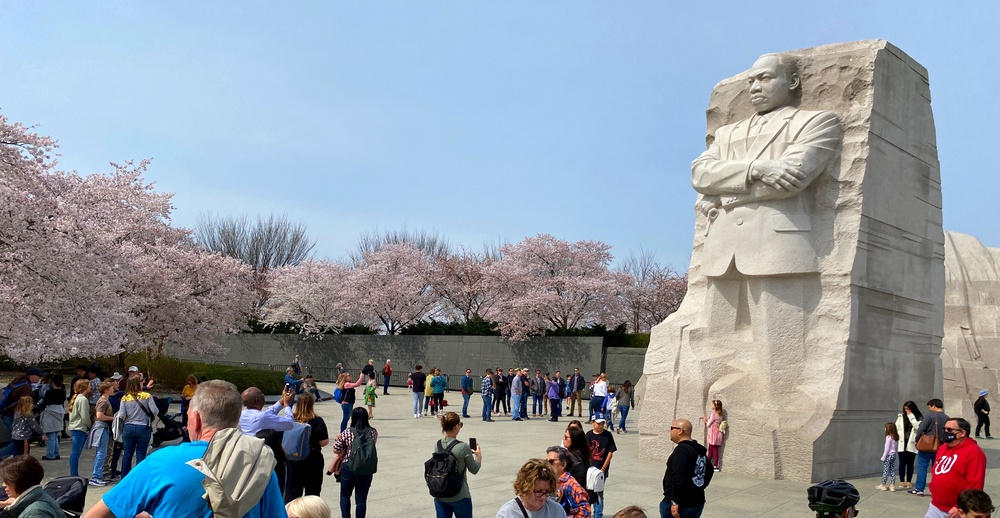 Also studded with cherry blossoms is the Martin Luther King Jr. Memorial next door, which prompts me to complain that the statue, by a Chinese artist, makes him look more like an emperor than a man of peace. It’s so monumental, people are dwarfed by it. (Next door, humans can easily pose with statues of both Franklin and Eleanor Roosevelt.) 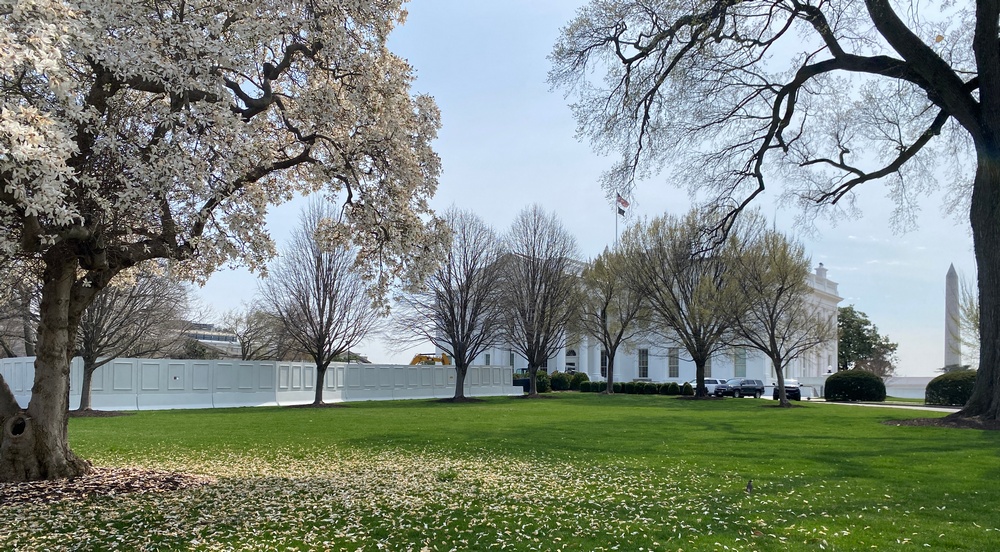 Back on my bike, I found more blooming action on the North Lawn of the White House, but discovered a big dig going on there, too. Wonder what that’s about!

But there’s good news about the White House Gardens – they’ll be open again this year!  That’ll happen the same weekend as the returning Easter Egg Roll, April 9-10.  Here’s how to get your ticket. I hope to get one myself.