I am repeating an extraordinary tale I heard over 40 years ago, one that deserves retelling.

In 1979 I was working for Will Ingwersen, the alpine plants expert and author, at his Birch Farm Nursery, a few miles from East Grinstead, England, near the Gravetye Estate. Mr. Ingwersen liked to tell a good story.

He and Alan Bloom, author and nurseryman (who lived to be 98), both enjoyed ice skating. Mr. Ingwersen, puffing on a pipe he never seemed to be without, told me he once visited a flooded field of flowering Lenten roses, Helleborus x hybridus, on a cold, late winter’s day at Mr. Bloom’s Bressingham Nursery in Norfolk.

Will Ingwersen and Alan Bloom spent a surreal afternoon, ice-skating over and staring down at the blooming, saucer-shaped Lenten roses beneath their skates. 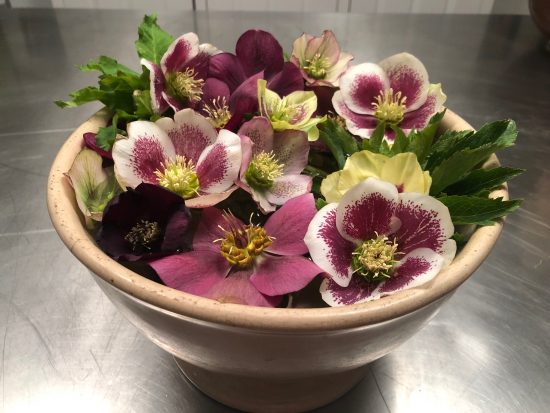 Kentucky’s late winters take wild swings, too. Les Parks, in a March 7th Facebook post, described his own late winter/early spring surprises. Les is Director of Horticulture at Norfolk (Virginia) Botanical Gardens. “I saw my first osprey of the season today, as well as my first snake. Spring has a foot in the door and a hand on the knob.”

Ten days ago, temperatures in Kentucky were in the 70s, followed a few days later by thunderstorms, heavy rain and a swollen Salt River that overflowed its bank and began to cover up a couple of thousand emerging daffodils in our bottomland. It has happened before with little consequence. This time the waters receded as fast as they had risen. The early daffodils were just budding up, and our hellebores, on higher ground, in no jeopardy of flooding—this time—were beginning to bloom.

But this past Friday night, the daffodils and hellebores were covered by five inches of snow when the temperatures dropped to 20 F.

There was no ice skating, but while I was standing before huddled, frozen Lenten roses on Saturday afternoon, the memory of the ice-skating story came alive again. Is the story true? If it’s not, it doesn’t matter. There is little sense allowing a lovely fantasy to be undone by the truth. 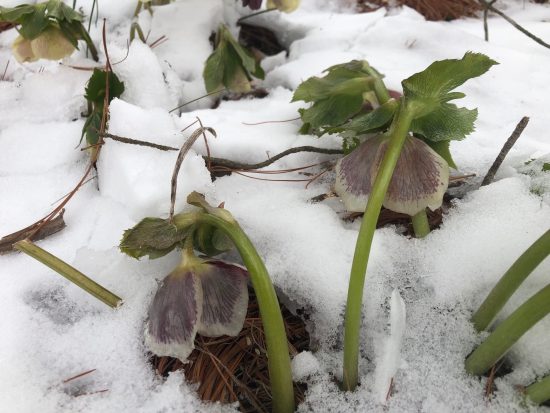 The Lenten rose is an aggressive seeding machine. Start with three plants, wait four or five years, and you’ll have enough seedlings to prick out, pot up and go on to supply garden markets within a day’s drive.

I couldn’t tell you the cultivar names of any of my hellebores, or if they had names to begin with. My curiosity beyond the common, old timey, pinky-purple ones began with a few more colorful and diverse seedling-grown plants that I bought and imported (legally) from the late Elizabeth Strangman’s nursery in Kent, England, in the early 1990s. Over the next ten years, I added seedling selections from Judith and Dick Tyler at Pine Knot in Virginia and from Marietta and Ernie O’Byrne in Oregon. (My fascination with the hellebore breeding frontier fizzled out, just as it had with daylilies, hostas and heucheras.) I eventually pared down these Lenten roses, and their progeny, to a dozen plants or so, plus a few seedlings I transplant from interesting flowering forms every few years.  What I have now requires the work of pollinating bees and ants that deposit the seeds. Keep hand clippers and a sharp hoe for light maintenance. 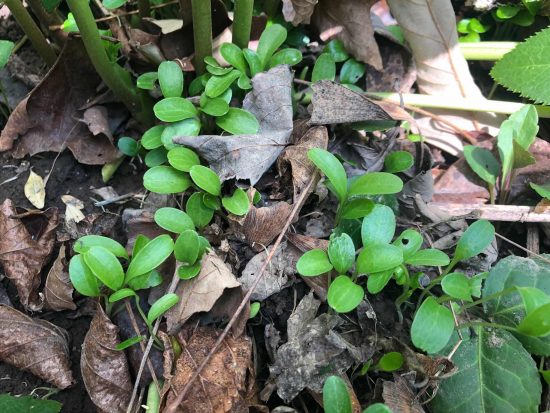 My Garden Rant partner Anne Wareham prefers leaving the old foliage unless the leaves are badly mangled by disease or winter cold. (I’ve had no disease problems. Knock on wood) I’m of mixed mind on tidying up. Sometimes I cut the foliage; sometimes not. Often, it depends on whether I feel like it. I often don’t. However, if you feel you are being overrun by seedlings, it’s easier to see and weed the offenders with old foliage removed.

Can Explosive Fecundity Be a Problem?

It might be. How’s that for an ambiguous response? You can easily transplant Lenten roses at a very early seedling stage before they put on their first true leaves—at the point of early flowering on the mother plants.  Don’t be deceived. Hellebore seedlings may look fragile, but they are NOT. I weed thousands of thick, dark green seedling hellebores—or try too—with a Dutch hoe, at flowering time, before they overtake my back 40 or nearby woodlands. 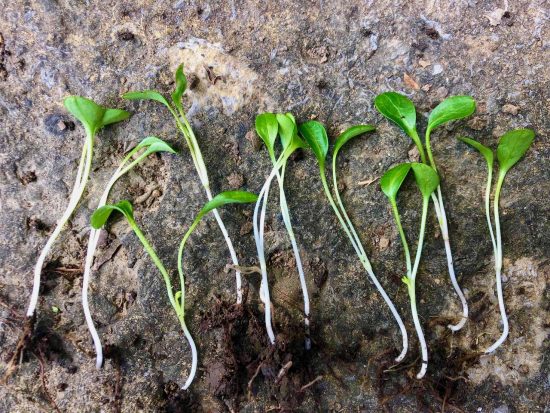 I prefer the single flowering forms. I don’t understand why gardeners love pinwheel shaped semi and double blooms of anything. Mums get a pass. Call me old fashioned.

Our hellebores survived the snow and cold, and so did the daffodils. Flowering proceeded.

The blooms of Lenten roses make good cut flowers. Follow the cut-flower preparation advice offered by Katherine Tracey of Avant Gardens in Massachusetts.  This requires that stems be dipped in hot, almost boiling, water with a splash of vodka.

But don’t use Russian vodka.